Back to Index Reply to Topic Like This Topic
Scientists set to unveil first picture of a black hole
9 responses | 0 likes
Started by silverspiker - April 6, 2019, 4:57 p.m.

The world, it seems, is soon to see the first picture of a black hole.

On Wednesday, astronomers across the globe will hold "six major press conferences" simultaneously to announce the first results of the Event Horizon Telescope (EHT), which was designed precisely for that purpose.

It has been a long wait.

Of all the forces or objects in the Universe that we cannot see -- including dark energy and dark matter -- none has frustrated human curiosity so much as the invisible maws that shred and swallow stars like so many specks of dust.

...... dude.... it almost shatters at all points that are resinous in harmonic vibrations....

Any motion in a curved path represents accelerated motion, and requires a force directed toward the center of curvature of the path. This force is called the centripetal force which means "center seeking" force. The force has the magnitude

Swinging a mass on a string requires string tension, and the mass will travel off in a tangential straight line if the string breaks.

The centripetal acceleration can be derived for the case of circular motion since the curved path at any point can be extended to a circle.

If the centripetal force must be provided by friction alone on a curve, an increase in speed could lead to an unexpected skid........ if friction is insufficient. 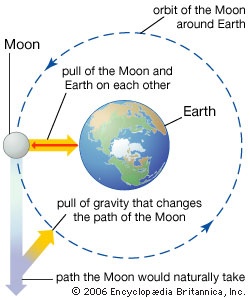 n the two masses, so in this example the Centripetal force is gravity.

....implying that a doubling of speed will require four times the centripetal force to keep the motion in a circle....

"Earth's motion around the Sun, not as simple as I thought"

here is first picture of a "black hole" 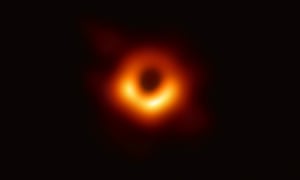 The black hole itself – a cosmic trapdoor from which neither light nor matter can escape – is unseeable. But the latest observations take astronomers right to its threshold for the first time, illuminating the event horizon beyond which all known physical laws collapse.

The breakthrough image was captured by the Event Horizon telescope (EHT), a network of eight radio telescopes spanning locations from Antarctica to Spain and Chile, in an effort involving more than 200 scientists.

Sheperd Doeleman, EHT director and Harvard University senior research fellow said: “Black holes are the most mysterious objects in the universe. We have seen what we thought was unseeable. We have taken a picture of a black hole.”

France Córdova, director of the US National Science Foundation and an astrophysicist, said that the image, which she had only seen as it was unveiled at the press briefing she was chairing, had brought tears to her eyes. “We have been studying black holes for so long that sometimes it’s easy to forget that none of us has seen one,” she said. “This will leave an imprint on people’s memories.”

The image gives the first direct glimpse of a black hole’s accretion disc, a fuzzy doughnut-shaped ring of gas and dust that steadily “feeds” the monster within. 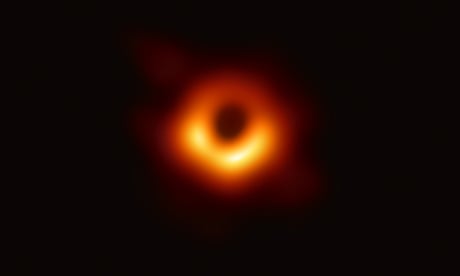 From Earthrise to the black hole: astronomy's most famous images

The EHT picks up radiation emitted by particles within the disc that are heated to billions of degrees as they swirl around the black hole at close to the speed of light, before vanishing down the plughole.

The halo’s crescent-like appearance in the image is because the particles in the side of the disc rotating towards Earth are flung towards us faster and so appear brighter. The dark shadow within marks the edge of the event horizon, the point of no return, beyond which no light or matter can travel fast enough to escape the inexorable gravitational pull of the black hole.

Black holes were first predicted by Einstein’s theory of relativity – although Einstein himself was sceptical that they actually existed. Since then, astronomers have accumulated overwhelming evidence that these cosmic sinkholes are out there, including recent detection of gravitational wavesthat ripple across the cosmos when pairs of them collide.

But black holes are so small, dark and distant that observing them directly requires a telescope with a resolution equivalent to being able to see a bagel on the moon. This was once thought to be an insurmountable challenge.

The EHT achieved the necessary firepower by combining data from eight of the world’s leading radio observatories, including the Atacama Large Millimetre Array (Alma) in Chile and the South Pole Telescope, creating an effective telescope the size of the Earth.

When observations were launched in 2017, the EHT had two primary targets. First was Sagittarius A*, the black hole at the centre of the Milky Way, which has a mass of about 4m suns. The second target, which yielded the image, was a supermassive black hole in the galaxy M87, into which the equivalent of 6bn suns of light and matter has disappeared.

The collaboration is still working on producing an image of the Milky Way’s black hole. “We hope to get that very soon,” said Doeleman.

The success of the project hinged on clear skies on several continents simultaneously and exquisite coordination between the eight far-flung teams. Observations at the different sites were coordinated using atomic clocks, called hydrogen masers, accurate to within one second every 100 million years. And, on one night in April 2017, everything came together. “We got super lucky, the weather was perfect,” said Ziri Younsi, a member of the EHT collaboration who is based at University College London.

The sheer volume of data generated was also unprecedented – in one night the EHT generated enough data to fill half a tonne of hard drives. This meant waiting for half a year for the South Pole data, which could only be shipped out at the end of Antarctic winter.

The observations are already giving scientists new insights into the weird environment close to black holes, where gravity is so fierce that reality as we know it is distorted beyond recognition.

In the event horizon, light is bent in a perfect loop around the black hole, meaning if you stood there you would be able to see the back of your own head. The observations also provide one of the most stringent tests to date of Einstein’s theory of general relativity: this predicts a rounded shape of the black hole’s halo, in line with what EHT has observed.

Scientists are also hoping to understand more about the origin of jets of radiation that are blasted out from the poles of some black holes at close to the speed of light, creating brilliant beacons that can be picked out across the cosmos.

However, the observations do not yet reveal anything about the black hole’s inscrutable interior.

Heino Falcke, chair of the EHT science council, who is based at Radboud University in the Netherlands, said: “The big question for me is whether we’ll ever be able to transcend that limit. The answer may be maybe not. That’s frustrating but we’ll have to accept it.”

The student who developed a crucial algorithm

The Event Horizon Telescope relies on a technique called interferometry. This is a bit like trying to reconstructing a pebble being dropped into a pond by placing detectors around the pond’s edge to measure the ripples sent out. Similarly, with the EHT, the signals from all eight telescopes have to be combined and fed through a computer to turn a mountain of incomprehensible blips into a visual picture.

This presented an unprecedented computational challenge: the amount of data collected was so enormous that it had to be physically shipped to a central location, the MIT Haystack observatory, in the form of half a tonne of hard drives.

Developing new, sophisticated algorithms was a crucial part of turning the EHT data into an image. These needed to not only combine the data but also filter out noise caused by factors like atmospheric humidity, which warps radio waves, and precisely synchronising the signals captured by the far-flung telescopes.

While still studying at MIT, the computer scientist Katie Bouman came up with a new algorithm to stitch together data collected across the EHT network. Bouman went on to lead an elaborate series of tests aimed at ensuring that the EHT’s image was not the result of some form of technical glitch or fluke. At one stage, this involved the collaboration splitting into four separate teams which analysed the data independently until they were absolutely confident of their findings.

“We’re a melting pot of astronomers, physicists, mathematicians and engineers, and that’s what it took to achieve something once thought impossible,” said Bouman.

So what sort of picture did you expect ss?

I found it interesting that what they said they did was create the same effect of having a telescope the size of the entire planet by combining 8 different telescopes around the earth that all had clear skies above.

It's confirmed. Black hole is a donut. 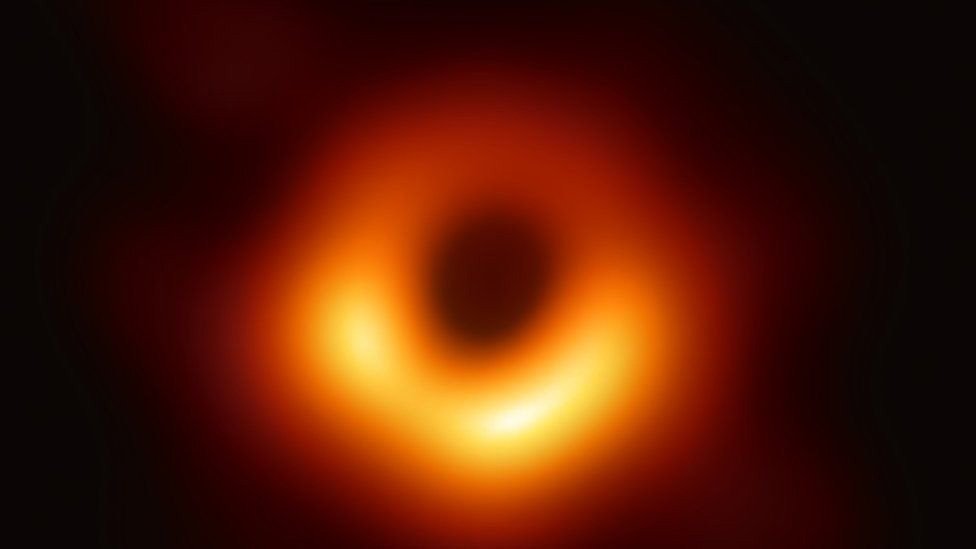 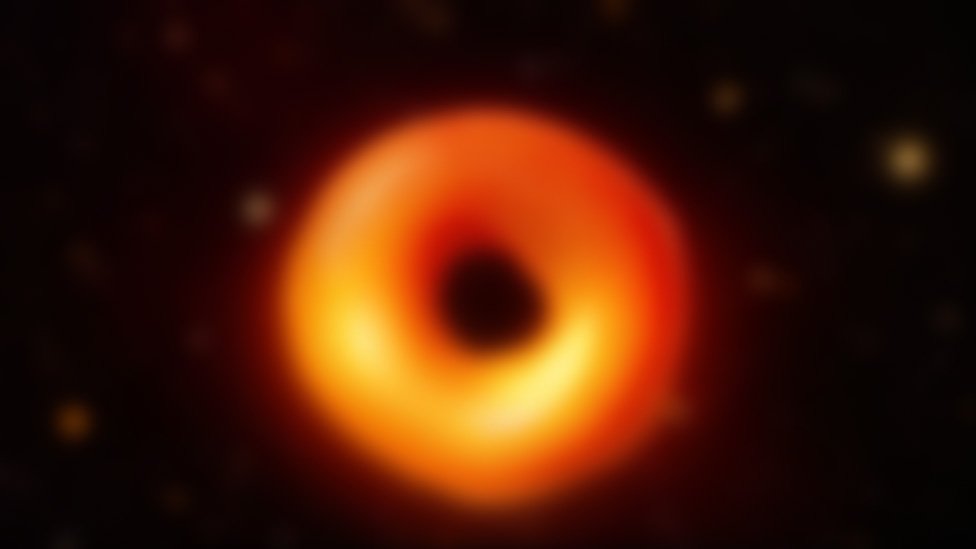 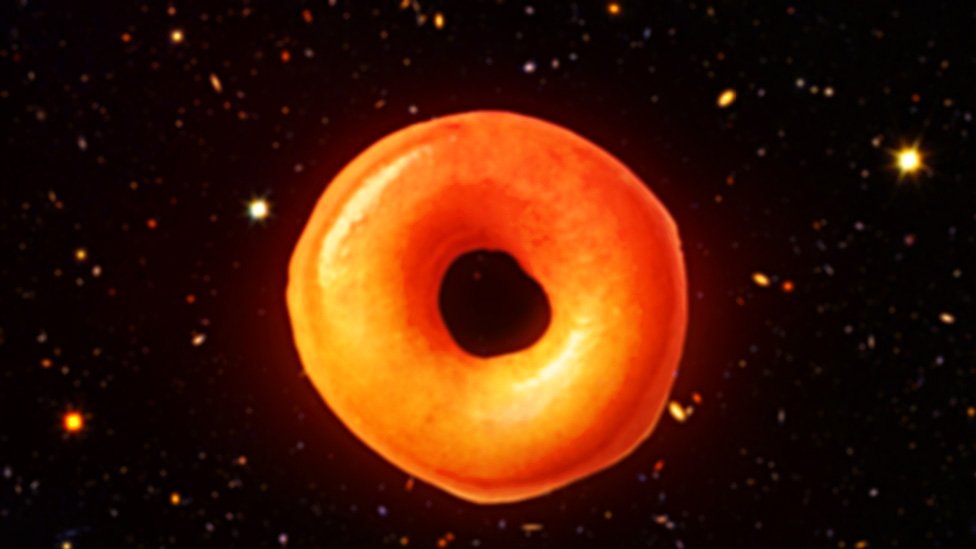