Barr's a no show and the "Snitty" letter saga continues.

The dems/justice department and MSM just better get used to the fact that the fake Russian collusion scandal attempting to frame President is dead. The attempts to pin obstruction on him for crimes related to this that he didn't commit and Barr for supposedly covering up those crimes and acting as Trumps puppet are an exercise in futility..........they've been exposed.

Of course they will continue to get gullible people to believe that crimes were committed by Trump and now Barr.

The new investigation that will uncover the real criminals and collusion and obstruction from the side trying to overthrow a legal election because they didn't like the choice of the American people is underway.

Barr knows it and doesn't have to sit there and listen to the desperate, unhinged democrats attacking him, calling him names and trying to smear him, like they smeared Kavanaugh.

Kavanaugh got extraordinarily upset when they used these underhanded, diabolical tactics to destroy his reputation but thank God he stood his ground to these unethical, sad excuses for representatives of the American people.

Barr is a cool cat. He let's the unhinged democrats rant on about their nothing case and doesn't engage other than provide minimal responses. He's above their shady tactics and doesn't let them rattle him which is there objective.

Welcome  to LibLand, where the # of investigations, not the findings, indicate the level of guilt.  I wonder how many actually buy into that steaming pile of nonsense?

I'm guessing none of the Trump apologists here ever read the report.

The Russian interference was extensive.  Who will defend our country?  Certainly not Trump.

Barr is a stooge.  Trump is the most corrupt politician in the history of the republic.

"Trump is the most corrupt politician in the history of the republic."

Yes, we heard that for 3 years now and how Muellers investigation had him red handed colluding with Russia.

How many crimes was Trump charged with?

I don't know of too many, most corrupt politicians in history being investigated for the crime of the century that they committed that don't get charged with anything after the investigation is over.

Get over it. Let's now find out who was responsible for the real crimes related to this investigation so this NEVER has to happen again.

"The Russian interference was extensive.  Who will defend our country? "

They supposedly knew since 2014.

Somehow, Trump the private citizen trying to get elected as the next president is responsible for doing the jobs of those that should be doing it?

The stretching of the imagination needed for this one can only be matched by this guy:

Still waiting for an explanation as to how corruption can be legal... 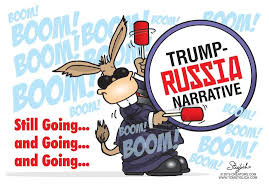 “You cannot have a government in which the president can conceal all information about his own wrongdoing and about anything else,” Nadler said. “He wants to make himself a king and Congress cannot permit that.”

“We cannot allow Donald Trump and his minions to convert a democratic government into what amounts to a monarchy,” he added."

Who just released a nearly 500 page report investigating him for 2.5 years for a crime that he didn't commit?

What party is blocking the "king" from addressing the southern border crisis?.........even after he declares an emergency, they still block his attempts to build a desperately needed barrier.

"though he emphasized that Congress wouldn’t have the votes to override a presidential veto, which Trump is expected to use,"

If Trump is acting like a "king" (vs the dems in congress who are just trying to block his agenda and smear him) then how is it, that King Trump has used his veto power less than any other president in the last 100+ years.......by a very wide margin?

This is just another bs narrative by the dems that is the complete opposite of the truth.

THEY are the ones totally abusing their power, now that they have control of the house but accuse Trump of it with their "king" narrative.

Again, note the extraordinarily low number of times that Trump has used his veto power to influence Congress.

How Trump fits into the history of presidential vetoes

Once he vetoes the measure, Trump will be nowhere near the all-time record for vetoes by a president. That superlative belongs to President Franklin D. Roosevelt, who vetoed 635 bills while in office.

It intentionally makes you think that he must be vetoing a lot of stuff because they compare it with the record for most vetos but don't give you Trumps veto's number..............which is almost the record LOW in history.

They wouldn't want to do that because it would contradict the fake narrative that Trump is acting like a king.

Kings actually don't get voted in  based on their platform, then stick to the same agenda they promised the voters that elected them.

However, Kings and dictators do get overthrown in coop's in non democratic governments...........like the attempts of Donald Trumps enemies tried to do, with actions that closely resembled a coop....to overturn the democratic and authentic presidential election results of 2016.

And they are still trying to take him out.

"Coup d’état, also called Coup,   the sudden, violent overthrow of an existing government by a small group.  Unlike a revolution, which is usually achieved by large numbers of people working for basic social, economic, and political change, a coup is a change in power from the top that merely results in the abrupt replacement of leading government personnel."

So who is acting like King vs a legally elected president trying to apply the agenda he promised for the American people with his platform.

On the other side, who is acting to follow the democratic process..........accepting the results of elections vs trying to  unseat the the democratically elected president with legal or illegal means(in cohoots with the justice department and MSM) and attempting to block his Make American Great Again agenda?

Jr.'s cut from the same cloth...I predict another contempt case and they'll just keep coming. Time to dust off the jail cells under the Capitol building?

How do we know that this isn't part of the new investigation.............of the investigators that started this whole thing under false premises for political reasons.?

Trump Jr has already been investigated, as has everyone even remotely associated with anything Trump has done for the last few decades.

Watch Dems Rail Against Contempt Charge for Holder, Cheer It for Barr

"Barr is being held in contempt for refusing to release a fully unredacted version of the Mueller report, including grand jury information, which he is expressly prohibited by law from doing.

Holder, on the other hand, was held in contempt for refusing to release relevant documents related to the Operation Fast and Furious ATF gun-walking scandal that allowed firearms to be illegally sold to Mexican drug cartels, at least one of which was used to murder U.S. Border Patrol agent Brian Terry."