The same articles are in the NTR section but with politics added.

*Trump threatens to impose tariffs on all Chinese imports

"China for the first time made clear what it wants to see from the U.S. in talks to end their trade war, laying bare the deep differences that still exist between the two sides."

Unlike China's Xi, Trump is not president for life

"Some have speculated that he is simply negotiating, believing the strength of the U.S. economy gives him room to play hardball. Others think that the president believes the tariffs will hurt China more than the U.S., emboldening Trump as he perceives an advantage.

It could also be that the president, used to being able to walk away from a deal, isn’t considering the different dynamics involved in negotiating with a sovereign power as opposed to a contractor bidding to construct one of his new buildings.

Still others conjecture that the president is using the potential negative near-term effects on the economy to force the Federal Reserve into lowering rates.

However, even if the tariffs were to slow economic growth enough to force the Federal Reserve into lowering rates, it seems counterproductive to intentionally slow the economy through tariffs if the point of lower rates is to juice the economy.

Transshipments. This was talked about Friday on MSNBC. China goods still get here and consumers ultimately pay the tariffs. Freight brokers are laughing all the way to the bank.

You don't really understand tariffs,  do you?  Of course consumers pay the tariffs. That's the whole idea. But last week, a Chinese electronic component that cost 400 will now cost 500. And the US component  that sold for 425 is still selling for 425.  So,the consumer may chose to pay the 100 tariff,  but odds are, at least some,most, all?  will chose the 425 US component.

It's doubtful the US made component (if available) will stay at $425 and when the price of all foreign or domestic goods and domestic goods made with foreign parts inflates (it's called inflation) people will stop buying, we'll see factory layoffs and we're plunged into recession/depression. We're already seeing sluggish sales of whole goods in rural America. America is getting hit in the breadbasket again.  We've been down this road before.

WASHINGTON —" A yearlong trade war between the United States and China is proving to be an initial skirmish in an economic conflict that may persist for decades, as both countries battle for global dominance, stature and wealth."

"The United States is increasingly wary of China’s emerging role in the global economy and the tactics it uses to get ahead, including state-sponsored hacking, acquisitions of high-tech companies in the United States and Europe, subsidies to crucial industries and discrimination against foreign companies."

The Trump administration has begun trying to limit China’s economic influence in the United States and abroad, warning about China’s ambitions in increasingly stark terms. Mike Pompeo, the secretary of state, compared China’s ambitions to Russia and Iran in a speech in London last Wednesday, saying Beijing poses “a new kind of challenge; an authoritarian regime that’s integrated economically into the West in ways that the Soviet Union never was.”

"China, whose ambition is to dominate industries of the future, is pushing back. A column on Saturday in the Communist Party’s People’s Daily newspaper stated, “The United States is again waving the club of tariffs after misjudging China’s strength, capacity and will"

"The notion that the United States has one last shot to change China’s behavior is held by an array of people on both sides of the political spectrum."

"Many in China see the United States as a declining power bent on enforcing its will on a world that no longer cowers before its hegemonic might. The troubles in American democracy and the long economic slump after 2008 persuaded many in China that its instincts to chart its own course were correct. In the eyes of many Chinese, their country is simply reclaiming its historic status as a dominant regional power in Asia."

"It has also projected power across Asia, Africa and elsewhere"  "they have long thought the United States would have a difficult time accepting a true peer in economic, technology and military power, so consider the management of conflict with the United States to be an inevitable result of their own rise."

And there's that foreign debt to China issue...

Some will think just file bankruptcy and walk away. Folks this ain't a failed Jersey City casino...this is our country and I don't speak Mandarin. Hitting America in the breadbasket will only make matters worse.

I moved this post(of mine) to the NTR forum

Huh? On what are you basing your idea/supposition that US products (If available??) will rise in conjunction with tariffs? Long term? Perhaps..   But worse case should see all this resolved in a month  or2.

We'll get to the"if available" later, but be prepared explain what the average 30 thousand or so manufacturing workers hired per month are doing.

And foreign debt to China? First, the majority  of the debt  in bonds  is held by the US. China owns a lot of US Bonds  but a smaller percentage that you and I and the US. 2nd,  if they tried to cash it allin at once,they'd wreck their own economy. 3rd,if they tried a lame brain tactic like that, we could  just nationalize the debt.  It would not help our credit rating for a couple years, but we'd hardly feel it.

Here's what we would feel shortly.

More on skirting tariffs. Given this fact...what other countries do we add to the tariff list? It's global trade chaos forthcoming.

the story of how the USA will loose hobs because of this tariff war is total BS. We will gain jobs because more jobs will come back to the USA and more people will get hired and they will buy more stuff. Chinese are butt heads and need to be dealt with .

We may lose 400k mfg jobs?  MFG jobs are being created at somewhere around 714% faster under Trump than they were in the previous 8 years.  (Remember that magic wand Obama wondered about?) So, we'll see how that fact free speculation/opinion works out.

This is a huge deal in the markets right now.

If/when this gets resolved, I sure wouldn't want to be short!

#Soybeans are absolutely the most important ag product USA ships to #China (about half the value). But there are other bulk and intermediate USA products that also rely on China's business. Here I have attached the value of US ag goods to China for the last 3 years as a reminder. 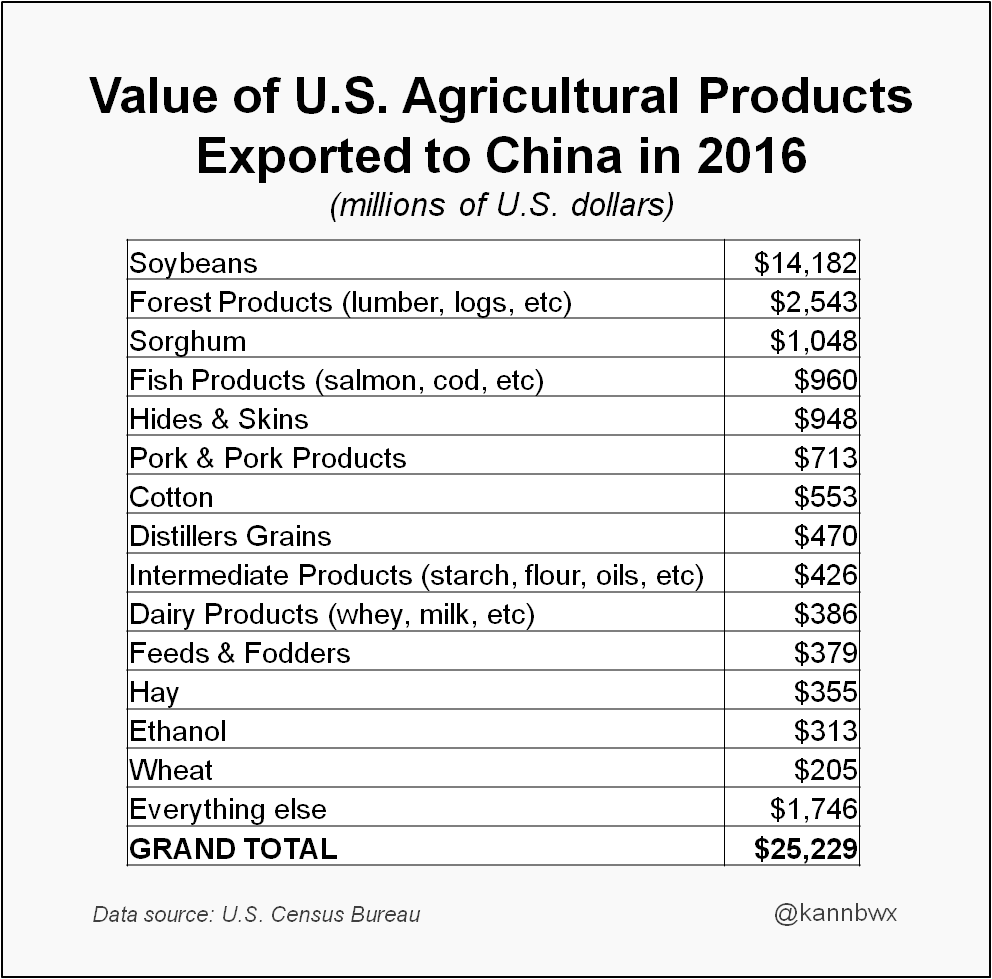 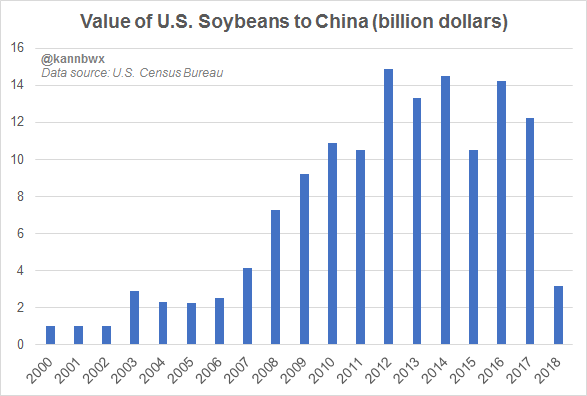 Very tangible evidence of the demand loss in China from ASF. 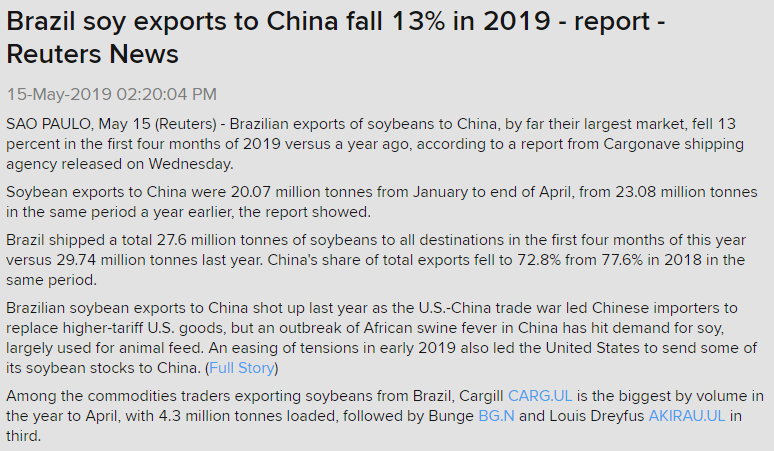 WASHINGTON — The Trump administration’s second package of aid for U.S. farmers hit by the trade war with China is expected to total $15 billion to $20 billion and involve direct payments, the agriculture secretary said Wednesday.