The development of human clothes has influenced the evolution of other species. For example, unlike all other kinds of louse, the body louse clings to clothing not to hair.

The body louse (Pediculus humanus humanus, sometimes called Pediculus humanus corporis)[1] is a louse that infests humans. The condition of being infested with head lice, body lice, or pubic lice is known as pediculosis.[2] Body lice are vectors for the transmission of the human diseases epidemic typhus, trench fever, and relapsing fever

The life cycle of the body louse consists of three stages: egg (also called a nit), nymph, and adult.[6]

In biology, a nymph is the immature form of some invertebrates, particularly insects, which undergoes gradual metamorphosis (hemimetabolism) before reaching its adult stage. Unlike a typical larva, a nymph's overall form already resembles that of the adult, except for a lack of wings (in winged species).

The phrase "nit picking" comes from the task of removing the tiny eggs of lice (nits) from someone's hair and clothing, a tedious activity that required close attention and care.

Wonderful to learn something new from you today carl! 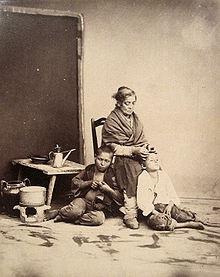 Photograph by Giorgio Sommer (1834–1914); Famille napolitaine — a Neapolitan mother searching for lice in her son's hair.

Nitpicking is the act of removing nits (the eggs of lice, generally head lice) from the host's hair. As the nits are cemented to individual hairs, they cannot be removed with most lice combs and before modern chemical methods were invented, the only options were to shave all the host's hair or to pick them free one by one.

This is a slow and laborious process, as the root of each individual hair must be examined for infestation. It was largely abandoned as modern chemical methods became available; however, as lice populations can and do develop resistance, manual nitpicking is still often necessary.

Just another one of the thousands of things we have to be thankful for living in todays age!