The platypus is the earliest mammal offshoot from the reptiles. It lays eggs but produces milk like other mammals. It also has evolved the ability to produce venom independently of its reptile ancestors. 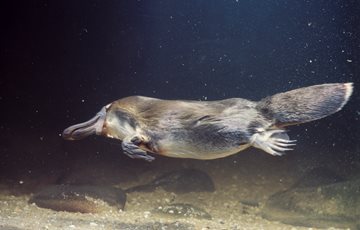 The platypus has a genetic affinity with both reptiles and birds

The platypus (Ornithorhynchus anatinus), sometimes referred to as the duck-billed platypus, is a semiaquatic egg-laying mammal[3] endemic to eastern Australia, including Tasmania. The platypus is the sole living representative of its family (Ornithorhynchidae) and genus (Ornithorhynchus), though a number of related species appear in the fossil record.

Together with the four species of echidna, it is one of the five extant species of monotremes, the only mammals that lay eggs instead of giving birth to live young. Like other monotremes it senses prey through electrolocation. It is one of the few species of venomous mammals, as the male platypus has a spur on the hind foot that delivers a venom capable of causing severe pain to humans.

The unusual appearance of this egg-laying, duck-billed, beaver-tailed, otter-footed mammal baffled European naturalists when they first encountered it, and the first scientists to examine a preserved platypus body (in 1799)[4] judged it a fake, made of several animals sewn together.

The platypus is Nature's way of proving that She has a sense of humor.