Invest 95L is north of Cuba: could threaten the SE US later. Watch this one.

Thanks very much Larry! You are one of MarketForum's Eye's in the Sky, when it comes to first notifying us of potentially significant tropical systems.

Here is a look at the GFS Ensembles Guidance. 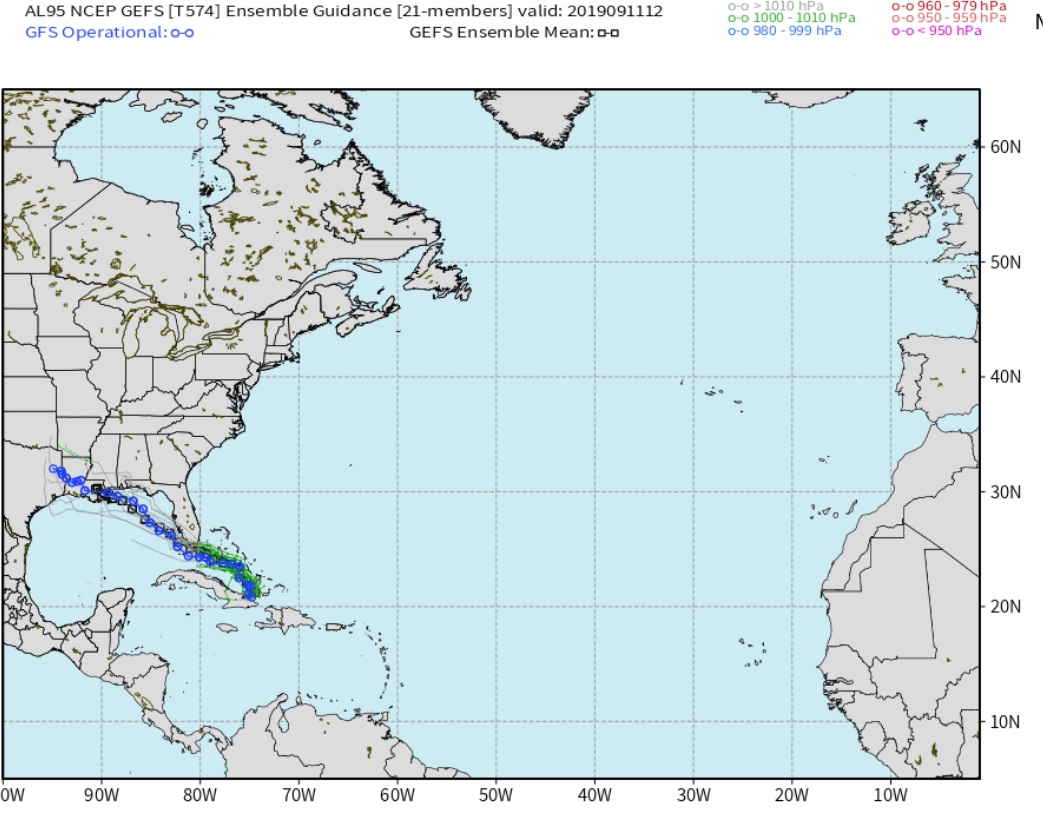 And here is a look at the EURO Ensembles. 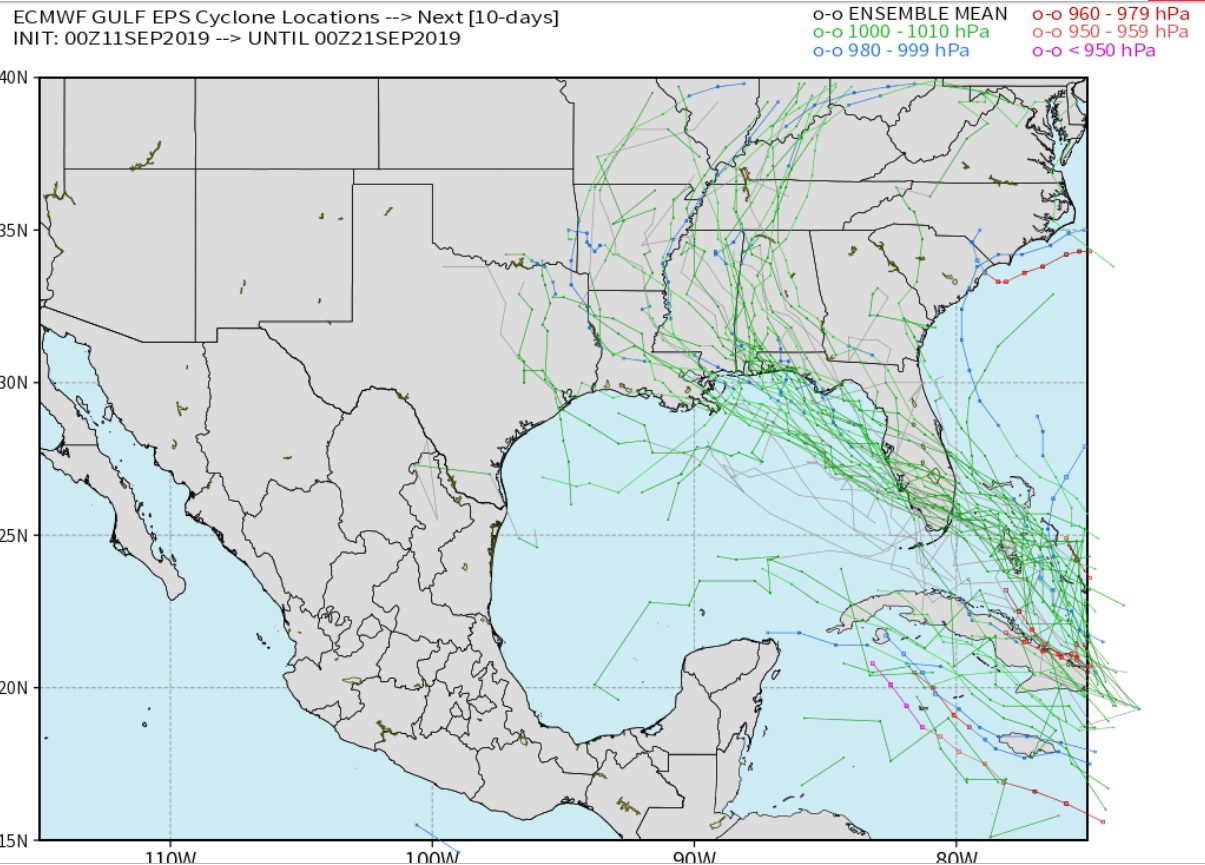 Both the GFS and EURO Operation take the low center over a good part of Florida at this time and keep some wind shear ahead of the system. If it can move west of the peninsula fast enough there is a chance for better development. I know we will be watching this closely over the next few days.

You bring a forecast product here that we can't get anywhere else as well as tropical weather expertise that, in my opinion puts you in an elite class of meteorologists.

Is that Alabama in the path on some of the spaghetti solutions???

I'll leave comments about that on the NTR forum so as to not mess up the professionalism of you and Larry here.

Thanks and yes Alabama is in the possible path

Under natural gas comments today: Also, potential tropical storm Humberto could threaten the Gulf. If it turns into a hurricane, potential production shut ins can be more bullish to the market price than the reality of the supply losses.

Yes I kind of want to get long. Watching the price closely overnight.

My first Tropical system I had to cover was Hurricane Humberto in 2007, which was the fastest developing hurricane on record. Went from being classified as a depression to a 90MPH hurricane at land fall in less than a day. I remember the forecasts being for 50MPH at landfall. But, it stayed just off the coast for an addition few hours and the lack of shear and very warm waters caused this storm to deepen rapidly. It was interesting to watch develop on radar. Always have to watch Gulf systems closely when the shear in the atmosphere is lacking. And like last September we have not seen a strong front bring continental air south. Last year we didn't see one until late October making for a dangerous set up as we know, Hurricane Michael. Until we get those fall fronts to the coast the shear is very weak and the Gulf Loop is hot and fairly deep. So this system if it does not move across the entire Florida Peninsula could become significant.

We're still above the previous Summer highs of 2.510 from the approaching heat back in early July but tested the 200 moving avg above 2.60 and failed,  which has meaning for some people/traders.

If the EIA report out tomorrow is bearish again, the heat is reduced again and there  isn't a big hurricane threat, I would think the path of least resistance will be downward.

I don't see how more heat, lasting into early October will push us to new highs(without additional help from a bullish EIA or maybe a hurricane for a quick spike) when HDD's are more important, starting mid October.

There is a good chance that the highs are in with this move, which has been fueled by a ton of short covering from long lived large traders.

Here is a look at all the model tracks I can put on a map. Most keep this moving across Florida which should keep it from developing too fast. The farther south it goes, the better the chance of it becoming stronger. 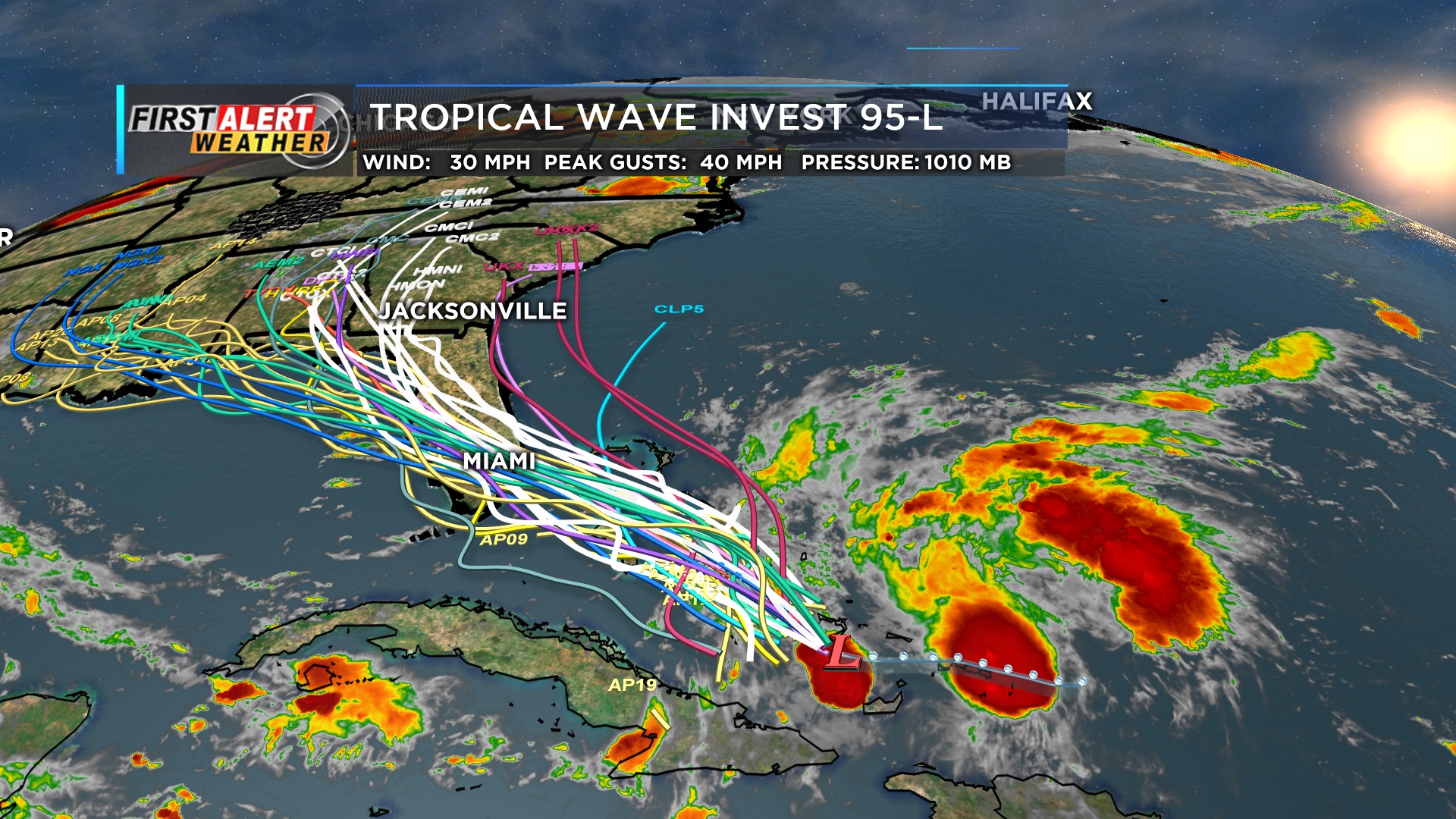 Thanks for the reply on NG.

It’s interesting that your first hurrican Was 2 Humberto’s ago. For most folks that sounds odd. The NHC reuses the same names every 6 years, and counting from 2007 gives us a multiple of this rrrrso there was an Humberto also in  2013, 6 years ago.

Ok. I live just outside of Birmiingham, AL. And I can tell you, that any rainfall we might receive from this system, just means that the grass is going to live for another week. Maybe 2. But we ain't holding our breath to get any more than that. The upper steering currents change day by day. So, even our local meteorologists are just guessing.

Consequently, I've only had to mow my grass 3 times this year. Got 1 dead tree in the back yard to cut down. And others that might fall over when the soil gets loose from becoming wet. Got cracks in the soil in my yard, that you could poke a finger into.

Interesting this time, the GFS ensembles take the system into the Gulf and the European model much farther east, East Coast, which is the complete opposite of Dorian as it approached the same area.

NHC has 70% chance of the system becoming a tropical cyclone in the next 48 hours. Up a bit from previous outlooks. 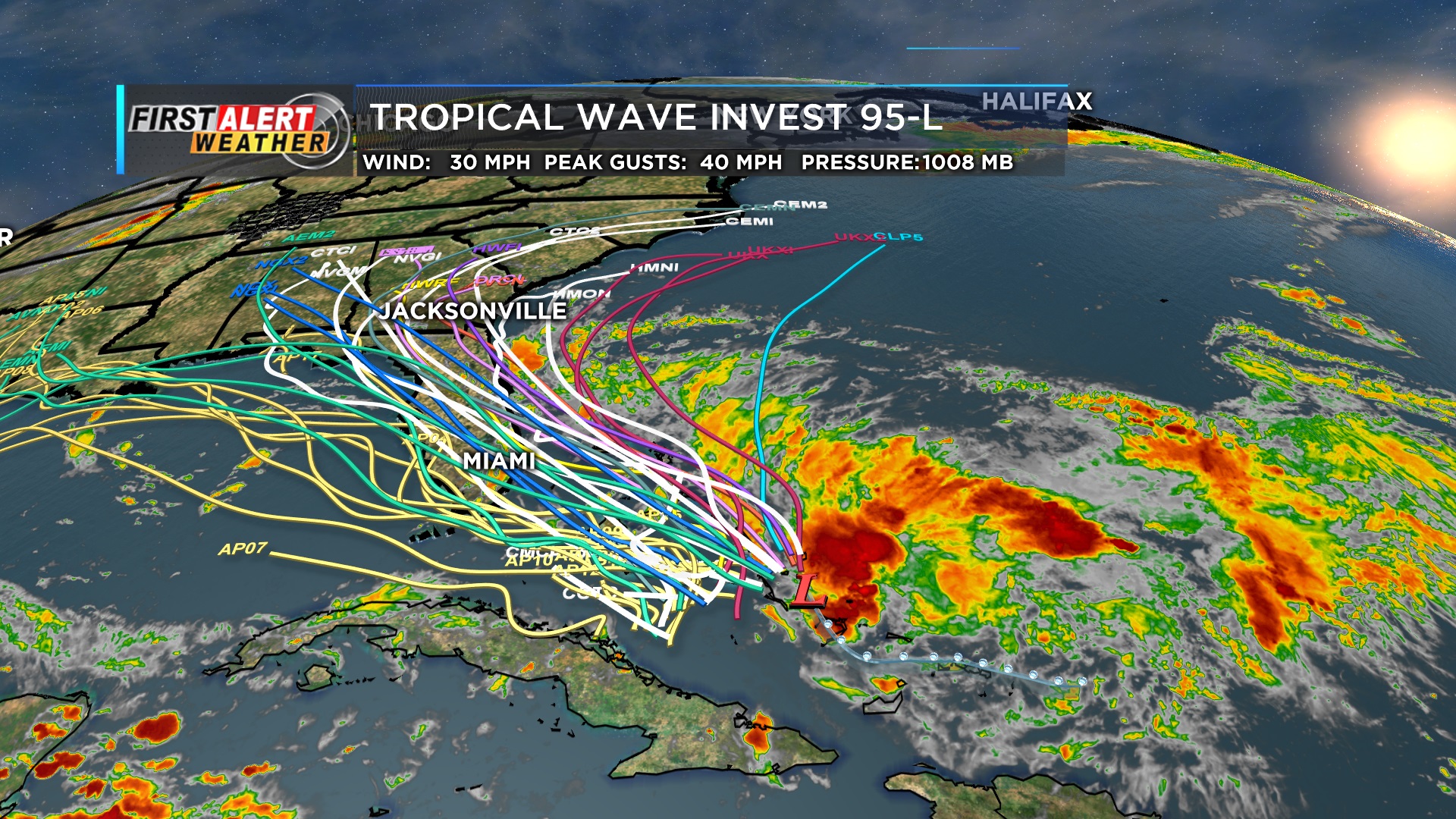 Thanks Grant. Wow, that's an incredible spread on the spaghetti map. The system is up to 30mph with it likely getting a name soon. The just issued cone and info is below. It's not expected to become a hurricane  at this point:

With the upper level low in the central GOM right now, moving northwest and weakening the next 4 days(to around New Orleans on Monday PM) it would be almost impossible for this system to get very far west into the Gulf as a separate, strengthening /developing tropical storm  using typical dynamics.

I'm thinking that maybe the GFS guidance has it so far to the west because its trying to merge the 2 systems.

In that case, one would think that it wouldn't be able to get very intense using the physics of hurricane magnification in an environment with so much wind shear from the  upper level low.

The GFS does wrap the tropical system around that upper low in the Gulf and this would cause lots of shear as you stated. The EURO has a much smaller upper low over the Gulf and moves it farther west the next two days and the tropical system would not be impacted by the upper low keeping it much farther east and a little stronger. Looking at the current 500mb chart per the SPC meso analysis, it appears the EURO has a better grasp on the current upper air pattern. Probably why the Hurricane Center is leaning that way too.

Like you said grant, the European model has a better handle on this system and its relationship with the upper level low in the GOM. The latest update is shifting the track to the right/east and diverges from the previous GFS guidance that was taking it across FL and even into the GOM. So now we have it staying off the FL east coast and having more opportunity, over water to get a bit stronger. Could reach a minimal hurricane but not forecast that strong yet. I haven’t checked to see if the waters in this area  were effected by and/or recovered from some churning by Dorian.

I didn’t mean to ignore your comment. Yes, rains from this system would have brought welcome relief  to your drought but sadly, they will miss to the east again.

After initially looking like very little chance to miss the US, those chances have increased to likely based on the new dominant center forming east of the model consensus.

Like Larry mentioned earlier, the updates on this system keep coming in farther east. The latest is quite a bit farther east and now poses no serious threat to the US..............even on the coasts, which will get some wind and rough surf.  However, tropical storm force winds are expected to remain off the coasts.

It will be curving east into the Atlantic in several days and may intensify to a minimal hurricane then but will not be threatening any land.

Tops winds are still around 30 mph.

I want to mention that even though I’m not backing off the idea of increased chance of staying offshore, 7 of the 51 Euro ensemble members (14%) do actually loop it past or just below S FL and then into the Gulf. The slower it moves and the longer it takes to get organized, the higher the chance it stays further south, stalls down there, and then loops back southwest to west. So, this is just an alternative scenario that can’t be tuned out right now. Maybe Grant will have something to say about this.

Still plenty of warm water in the area that future Humberto will be tracking over.

Dorian has churned up some slightly cooler water along and north of the Bahamas(purple shade and pink patch) which I speculated about earlier, from upwelling of cooler water below in the path of Dorian( but still plenty of warmth left.

Hurricane Dorian Kicked Up Cooler Water in the Atlantic, But What Does That Mean For a Potential Humberto?

Tropical Storm Humberto is well off the coast of Florida. It should become a hurricane later today or tonight and continue to strengthen. However, Humberto's motion will be curving eastward and heading out to sea and is no threat to any land masses.

We are currently past the peak/mid point of the hurricane season in the Atlantic basin. Other than Humberto, there are a couple of weak disturbances in the Atlantic basic, one in the Gulf. Those are not expected to develop much the next several days.

Number of Tropical Cyclones per 100 Years

The official hurricane season for the Atlantic Basin (the Atlantic Ocean, the Caribbean Sea, and the Gulf of Mexico) is from 1 June to 30 November. As seen in the graph above, the peak of the season is from mid-August to late October. However, deadly hurricanes can occur anytime in the hurricane season.