I keep hearig that Arctic sea ice is shrinking,   but I would swear I have heard evidence to the contrary here,..

Do you have a link you can provide to back up your claim? Thanks.

Here's a graph of the Arctic Sea ice going back to 2012, which set the record low coverage in September.

Levels have not changed that much(but the trend is still clearly down), which has been a surprise to me as I expected Arctic sea ice to drop below 2012 levels by now.

The global warming has been greatest in the coldest places during the coldest times of year, especially in the Northern Hemisphere(Winters in the Arctic are at the top of that list). By historical accounts, and before climate science was hijacked for political agenda, we called that a climate optimum.

With that being the case, its not been the Summers(melt season) but the WInters which have experienced the biggest affects(warming) from global warming in the Arctic.

At this time, on the graph below, you can see that 2019 is right at the bottom for Arctic ice coverage.

With the next 2 weeks+ featuring the cold being locked up in the north vs coming south, Arctic ice should see some good short term recovering but longer term, there is no indication that we have turned the corner and I would expect less Arctic ice in several years vs what is there now. 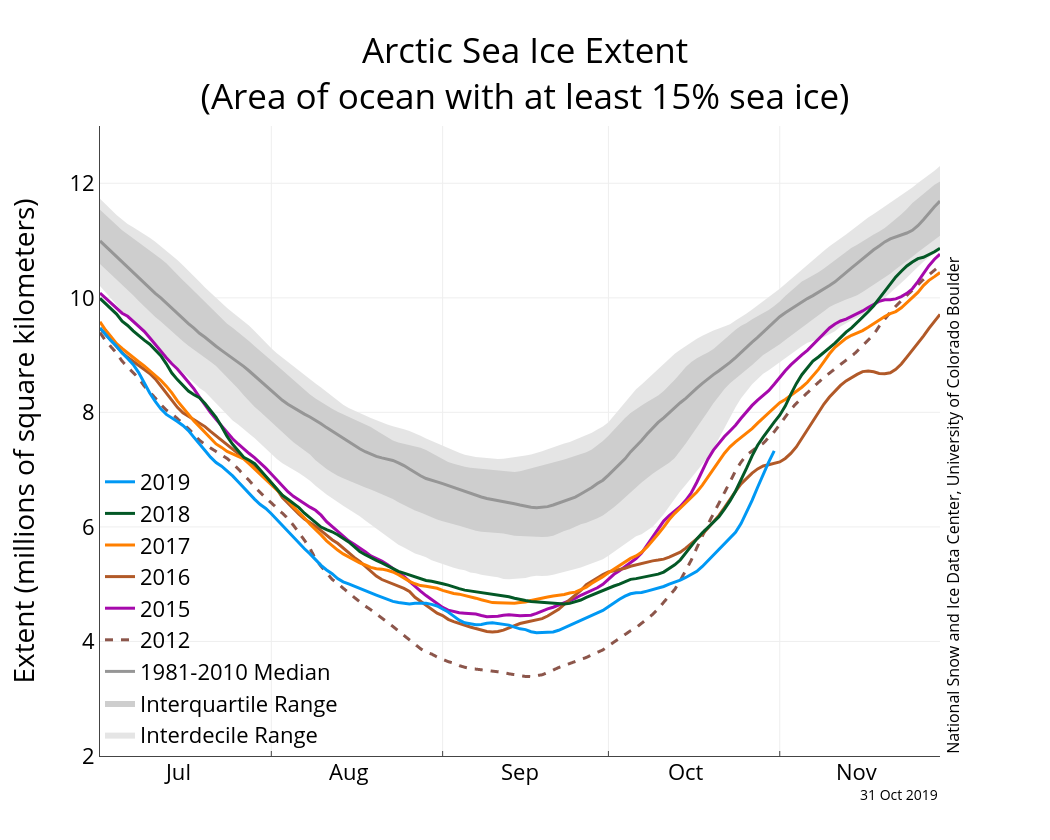 If you think that you heard evidence here that contradicts this last post, feel free to review these discussions to find it.

Maybe you heard that Antarctic ice was recovering at some point.

Anyway, you should note that melting SEA ice in the the Arctic is like a big ice cube in your soft drink to the ocean. When it melts, the level of fluid stays the same.

With the Antarctic however, there is a ton of ice on land. If a lot of that melted, then sea levels would go up much higher. Sea levels have only been creeping higher at a rate less than I have been expecting considering the amount of beneficial warming on our greening planet.

I believe that, possibly increased evaporation from the oceans is depositing more precipitation over land, which is "soaking up" some of this that should be increasing sea levels more.

What  about the claim that global warming causes cold winters?  The warmer air of the arctic pushes the cold air south?

I'm away from my office/computer to show links but the speculative theory is that global warming of the coldest places in the Winter/coldest time of year(which is a Good thing)) causes the dominant west to east jet stream to be weaker. When that jet is moving west to east it traps the colder air to the north associated with the many months of darkness at high latitudes and sustained, round the clock heat loss that brews up the coldest air masses on the planet.

A weaker jet allows it to develop more north to south and allows the polar vortex associated with the core of the cold to drop much farther south of its typical position.

In theory this does make some sense as decreasing the temperature gradient will weaken the magnitude of the jet stream. This also weakens energy for Winter storms and violent tornadoes if you want to view it objectively.

Also, weather records show that a decade like the 1970s during global cooling with a stronger jet featured many more extreme cold outbreaks and much farther south....which means the real world is busting that statement/theory.

In addition, since the highest latitudes and coldest places are warming the most, Arctic blasts are getting less and less cold as global warming continues. This one is no brainer weather science. Weather records clearly show that we are having milder Winters and less extreme cold outbreaks.

The main reason that we hear this theory touted is because it creates another scary narrative that supports the fake climate emergency. Anytime there is extreme weather...we hear about it being caused by the increase in CO2 from burning fossil fuels.

We have people that believe that global warming causes extreme cold to increase and a 16 year old girl predicting a climate apocalypse in 2030 that is getting more attention than the actual real world data proving that we are having a climate optimum.

There HAS been an increase in rains and flooding with the warmer atmosphere holding more moisture. There has been slight increase in heat waves. Those have been the main bad things from the beneficial warming on this greening planet. The good things outweigh that by a wide margin.

an interesting thought... at the smithsonian, they have had a display on climate.  a tidbit of info there says that over the last half a billion years, the have been NO polar ice caps for 75% of the time.   that means it is actually normal to have no ice at the poles.

so having a polar ice cap is Not the norm.  even with the so called "man made global warming" we are still cooler currently than the long term norm.

can anyone confirm that?

This is a good point to put things into perspective. In the past, much of the time our planet was much warmer than this with much less polar ice and higher seas.

The biggest problem is that most of the data is speculative with regards to how warm or how cold and for how long.  You can go to 10 different sources and find numerous different speculative discussions on this, some of which, to me don't make sense.

Many of them correlate the higher CO2 levels as if they caused the warmer planet but its much more likely the other way around. Henry's law tells us the the amount of CO2 a liquid can hold is a function of the temperature of the liquid.........in this case water in the ocean.

The oceans – the largest CO2-reservoir

"The oceans are a massive, massive reservoir of CO2. Today scientists can estimate fairly accurately how much carbon is stored in the individual reservoirs. The ocean, with around 38,000 gigatons (Gt) of carbon (1 gigaton = 1 billion tons), contains 16 times as much carbon as the terrestrial biosphere, that is all plant and the underlying soils on our planet, and around 60 times as much as the pre-industrial atmosphere, i.e., at a time before people began to drastically alter the atmospheric CO2 content by the increased burning of coal, oil and gas. At that time the carbon content of the atmosphere was only around 600 gigatons of carbon. The ocean is there­fore the greatest of the carbon reservoirs, and essentially determines the atmospheric CO2 content."

The geological records strongly suggest that the temperature went up First, then the CO2 went up after that. So we likely had global warming of the oceans from the sun and the warmer oceans could not hold as much CO2 suspended.......this outgassed massive amounts of CO2 into the atmosphere.

There is uncertainty about alot of this, including how much ice and when but with certainty, periods that were a bit warmer than this have always been referred to as climate optima by scientists.

The most recent one between 9,000-5,000 years ago has always been called the Holocene Climate Optimum:

"Out of 140 sites across the western Arctic, there is clear evidence for conditions warmer than now at 120 sites. At 16 sites, where quantitative estimates have been obtained, local HTM temperatures were on average 1.6±0.8 °C higher than now.  Northwestern North America had peak warmth first, from 11,000 to 9,000 years ago, and the Laurentide Ice Sheet still chilled the continent.  Northeastern North America experienced peak warming 4,000 years later. Along the Arctic Coastal Plain in Alaska, there are indications of summer temperatures 2–3 °C warmer than present.[5] Research indicates that the Arctic had less sea ice than the present."

50 years ago, if you had asked scientists what the optimal global temperature of  the planet would be for all of life, the vast majority of them would have said "warmer" possibly close to 100%. Almost none would have said colder.

Here is 2019, we hear about bogus studies that tell us 97% of scientists say the complete opposite as what nearly 100% of scientists thought 50 years ago.

The manufactured narratives telling us what to believe based on agenda and political belief systems via the hijacking of climate science are what changed.

Truth is, the optimal global temperature for life on this planet is probably at least 2+ degrees warmer than this.

Why do I say that?

In the  mid/high latitudes life is still most challenged during the numerous cold months of the year by a very wide margin.
Some life has an opportunity to head south for the Winter to save itself from the killing cold and lack of food.
Much of life will go into a hibernation mode to survive these cold months. Life that is exposed to the elements all Winter suffers thru great adversity and remains in survival mode, celebrating in the Spring when it can recover as warmth brings food and health recovery and opportunities to procreate.

All animals eat plants or something that ate plants. Many to most plants either go dormant to survive the long harsh Winters or they die and come back from seeds germinated by the return of life giving warmth in the Spring.

This is why authentic science has always defined periods this warm or warmer in the past as  climate optimums on this greening planet and that will continue, with benefits to most life for the next 100 years at this rate of warming………which affects the coldest places at the coldest times of year……..maximizing the benefits to life.

It's Twilight Zone science to be claiming that the current rate of warming(.13 Deg.C/decade or 1.3 Deg/Century) is going to result in a planetary apocalypse in less than 12 years.

We are absolutely having a climate optimum not a climate emergency but they are telling us, that the 0.15 deg. C temperature increase between now and 2030, with no cutting back on fossil fuels, will result in us destroying the planet. This makes no sense.

The authentic science tells us the complete opposite.

I am extremely confident that, if CO2 levels continue to go up at the current rate of 2 parts per million/year and the global temperature is 0.15 deg. C warmer, that in 2030, planet earth will be even greener. Crop yields and food production will be even higher because of better weather/climate and CO2 levels.  Most life will be doing even better in 2030.

There has been global warming(beneficial) and humans caused some to most of it, however, the climate crisis/emergency is completely made up in order to try to convince us to do what they say in order to save the planet. It results in increasing carbon taxes so governments can rake in more of your money(many places are already doing this). A big part of the plan is to impose socialism(Climate Accord does nothing for the climate but, instead, spreads the worlds wealth from rich to poor countries).

It justifies insane plans like The Green New Deal that would cost something like 40 trillion dollars and ironically, do almost nothing to affect climate.

China's increasing CO2 emissions(they emit twice what we do) and CO2 being well mixed in the global atmosphere, mean that our cuts will be offset by their increases............and the global socialism climate accord allows for China to do this and at the same time, get money from the rich countries like the US......because the UN has catagorized China as a poor country.