Back to Index Reply to Topic Like This Topic
Majority of Americans disapprove of Trump’s handling of Iran, feel less safe after strike....
4 responses | 0 likes
Started by TimNew - Jan. 12, 2020, 9:47 a.m.

I can only assume they used a very specially  selected population for this survey.  The overall reaction I am seeing is quite different.

In a week dominated by increased tension with Iran and speculation over when impeachment articles would be delivered to the U.S. Senate, a majority of Americans said they disapprove of President Trump's handling of the situation with Iran and feel less safe, according to a new ABC News/Ipsos poll."

because the majority of Americans get their news from the MSM... and the "trending" subject on everyone's iPhone on that day was "WW3 is starting"

I agree with Gunter.

People's opinions, to a large extent are based on what they hear and see on the MSM.

Have any  of these people they polled been to the Middle East lately?

Have they witnessed things that the MSM is not telling them about?

Do they have special contacts that would give them this information?

They rely on the MSM to cover the stories. In todays age, where 95% of the news coverage on President Trump is negative and the MSM clearly acts as progressive activists vs professional journalists at many times when it comes to the president, how would this not be the case?

Their views and opinions are almost all lined up with the political party that they affiliate with.........as is the case with every topic.

"When it comes to attitudes on the conflict with Iran, partisanship drives opinions. An overwhelming 87% of Republicans approved of Trump's handling of Iran, and 54% say they feel safer. Among Democrats, 90% disapproved and 82% felt less safe."

The democrats and MSM will attack him relentlessly on everything, no matter the circumstances. The republicans will defend him when he deserves it and distance themselves from him when he turns into a loose cannon that does things that make everybody cringe, related to his personality flaws.

Pelosi says Trump was not upfront with Congress on Iran

“What you're saying is you don't trust the Congress of the United States with sources and methods and timing?”

Gee, why wouldn't President Trump trust the democrats in congress.

The only reason that they are trying to destroy and impeach him is because they think he would enjoy life much more as a private citizen next year (-:

The only reason that they take the opposite position from him on everything is that they want to challenge him (-:

They only reason that they make up stuff about him and do investigation after investigation is because they know that he likes attention (-:

If President Trump had tipped off the leak-o-crats before his actions, the most likely action from them would have been  to try to stop him, possibly by leaking out the information so that the target would be tipped off in advance.........seriously.

The relationship between President Trump and the democrats in congress has been irreparably and permanently destroyed.

Previous presidents and the opposite party members of congress often disagreed on many issues but managed to work together for the American people.

Clearly, it's been the complete opposite of that the past 3 years. So who's fault is it? I don't think anybody can question whether President Trump is working for the American people. If the democrats oppose almost everything that he does.......because it's him doing it, then it reveals the weak point.

He takes strong positions, often with feather ruffling actions based on HIS agenda not based on it representing the OPPOSITE of the agenda of those that oppose him. He tries to run over his opposition if they get in the way of HIS agenda(that he was elected on) sometimes using unpopular tactics.

He has made a lot of enemies of those that don't support the agenda that he ran on, who are committed to blocking it and obliterating him. Especially because of what he does and says related to his personality/character flaws.

The old expression "the enemy of my enemy is my friend" comes to mind with the democrats.  While Iran is not their friend, nor evil terrorists, when Trump takes them on or takes them out, they suddenly become less evil and Trumps actions were wrong...........because, in their minds, everything that Trump does is wrong.

If Bin Laden was killed in the last 3 years, he wouldn't have been that bad of a guy in some eyes.

For years, the dems thought of McCain as a loose cannon, war monger and dispicable person. It took a feud with Donald Trump to suddenly turn him into a dedicated, patiotic war hero for them.

Trump retweets image of Pelosi, Schumer in Muslim garb next to Iranian flag

The corrupted Dems trying their best to come to the Ayatollah's rescue.#NancyPelosiFakeNews 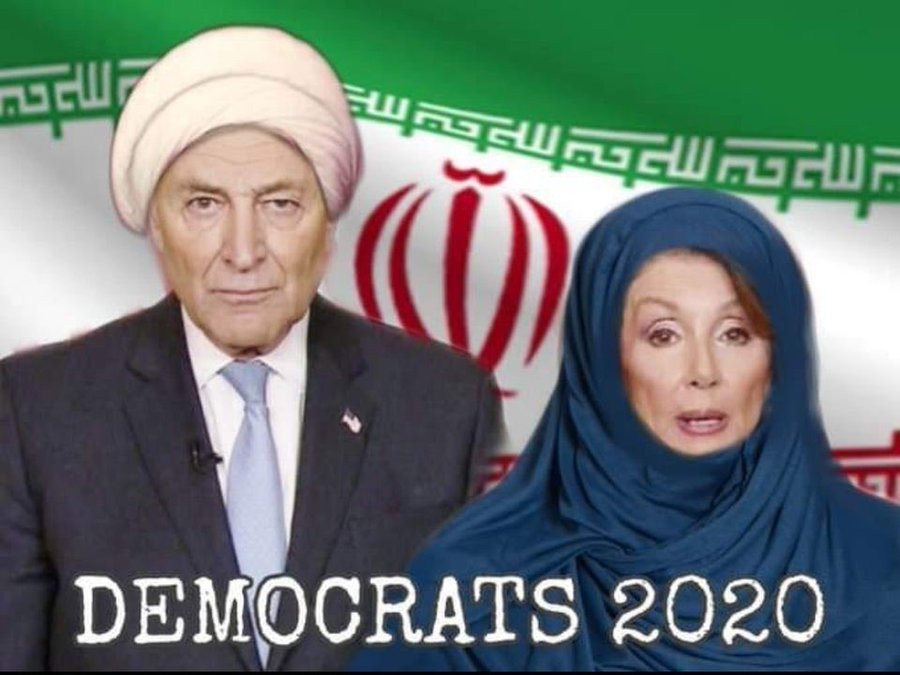 "The Democrats and the Fake News are trying to make terrorist Soleimani into a wonderful guy, only because I did what should have been done for 20 years. Anything I do, whether it’s the economy, military, or anything else, will be scorned by the Rafical Left, Do Nothing Democrats!"

"she said. "I think the president was making the point that Democrats seem to hate him so much that they’re willing to be on the side of countries and leadership of countries who want to kill Americans."

metmike: Never a dull moment with this president.

Several ways to take this.

1. Clearly unacceptable for a president to communicate this way.  It's juvenile and beneath the office of the president and clearly divisive but what's new.........it defines his personality/character flaws exactly.  This could also be seen as offensive to Muslims and will be painted as having been intended to display racism and xenophobia. President Trump wants to win over the independants on the fence or others to be re elected  and a tweet like this is only going to do the opposite.

2. As is often the case, his offensive and unacceptable, crude manner of communicating a point bluntly and honestly, actually is based on an excellent point but his delivery method causes everybody but Trumpers to cringe vs thinking "yeah, he is right on".