Temps will be dropping to the mid 20's in some locations of the Eastern Cornbelt. 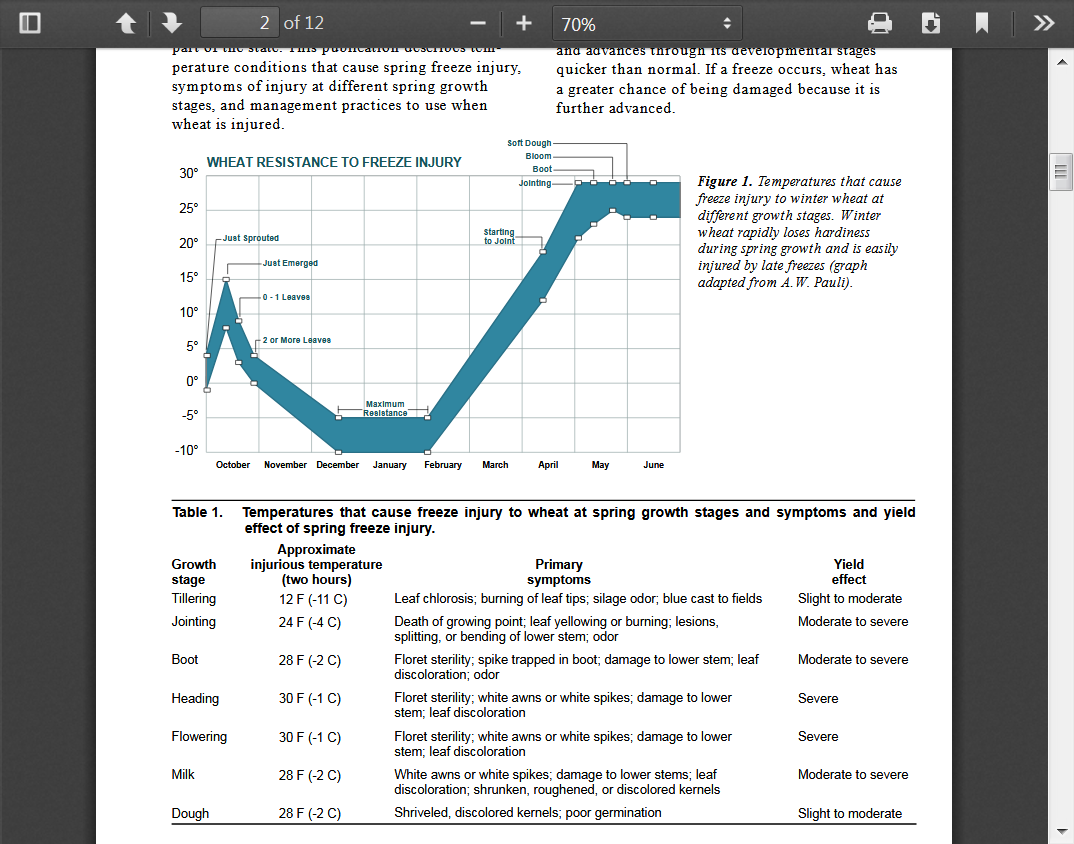 Over half of the SRW crop is jointing(ed) in IN and OH, where temps below 28 degrees for several hours may do some damage.

Farther south, in KY and TN, alot of the crop his headed and even more vulnerable. MO too. Temps below 30 degrees can hurt.

Latest low temp forecast for Saturday morning from the CMC model(which is the coldest one). 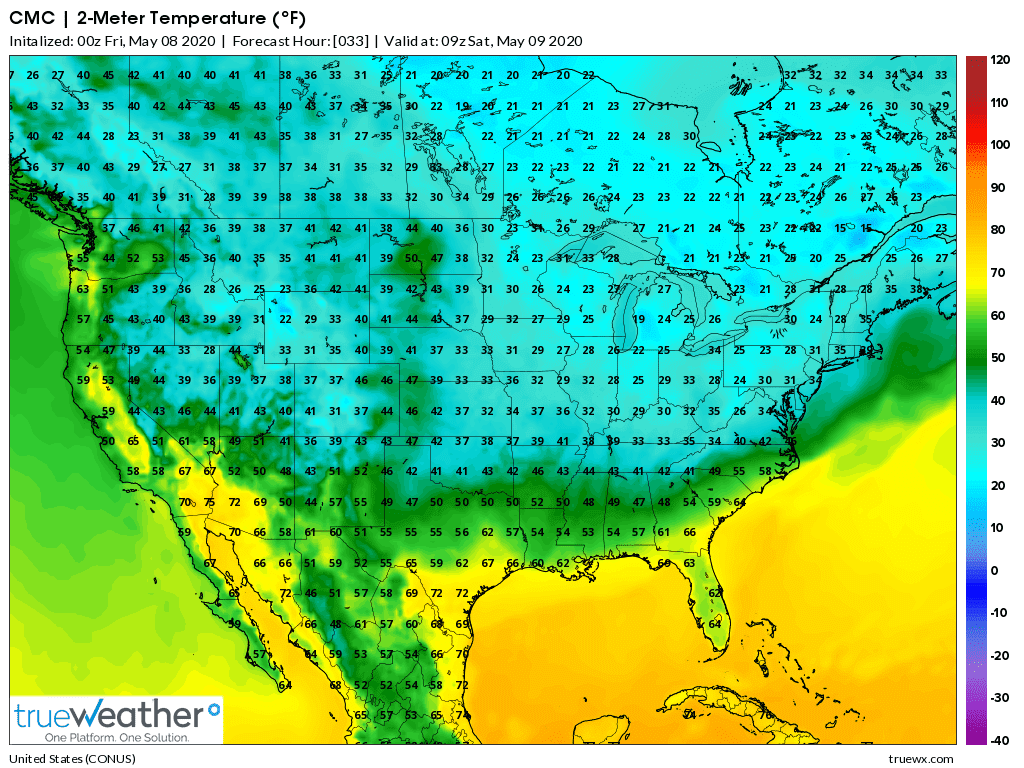 35 degrees here at the  EVV airport  but outlying areas likely in the U-20's.  29 degrees at Huntingburgh.

I saw widespread U-20's across much of IN/OH, I think it was 6am. The northern parts of those states had dewpoints well down into the teens but thanks to the winds never dropping off like they did farther south, were saved from temps that could have plunged 10 degrees colder.

Clouds also moved in late to the IN area and it was snowing for while earlier this morning.

I'll try to find a map that has low temps from this morning to post.

My guess is that if there is no threat of excessive rains, the SRW market will do a buy the rumor, sell the fact act on Monday and sell off, since temps were pretty close to those predicted(I think).

24 degrees for a couple of hours on wheat this far along did some damage but didn't kill it.  Now if we find out there were more temps like that and/or  L-20's in outlying areas, that is different.

The KY crop was mostly headed, so even U-20's there did a bit of damage.

As always, we won't know for a couple of weeks with crop ratings how this affected the SRW crop.  I will guess they drop a couple of %(just the SRW).

They had around an 8% drop the 2 weeks after the S.Plains freeze, all HRW crop and part of that has been they dryness, that is especially bad in CO and points northwest of that.

How cold were you Saturday morning?

I don't know why but we don't have a high-low temp soil-air gauge. We do have a soil temp probe but nobody was up early enough to stick it in the ground. I can tell you it froze hard enough for ice in cat dish

However, as many acres we have planted nothing has emerged. I week ago I dug up some corn and it had a 1/4" sprout

Corn under plastic was still 1/2" from emerging on Friday

Corn under plastic should be two-three leaf by now

It is cold under the plastic. We have had hardly no sun which makes the plastic green house effect work

So: Temps  -- no idea. We were forcast for 28 locally, and there was no cloud cover

Nothing close to emerging so nothing to freeze, unless it freezes the soil, which doesn't look like that happened. I did not look at local air port temp.

We shut down planting, after Wed. with a small amount to finish some sweet corn on Thurs.

Wed-Thursday every bodies planters stopped due to advice from seed Co. We are forcast to still get cold until Mon so plans are to start the planters going on Tues. Cold water in soil will give seed  a cold water shock, which can be risky, especially with cold air temps which will not let soil warm up until next Tuesday.

Everything is late around here with cold temps. You can tell by looking at the trees and the buds/very small leaves on some trees. The bush lot trees look like it is still winter with bare branches

We have no wheat or beans planted. Just a few beans will get planted to fill in small plots of ground in sweet corn fields. Some folks were wondering if their emerged beans will escape frost damage, in some USA states.  I don't think we have any emerged beans in Ontario, as it is so cold. Nobody has emerged corn around us locally

How to Grow Sweet Corn Under Plastic

EXTREMELY RARE… Temperatures have fallen into the 20s during the month of May just seventeen times since 1924. The most recent prior occurrence was fifteen years ago, back in 2005. Just for the record I had corn that was 3 inches tall when this frost  hit. Totally killed everything above ground. Now 10 days latter looking at it you would not know that anything happened. The corn in my opinion was set back about a week.

Good thing the growing point was still below the soil and temps only got a few degrees below freezing for several hours.

So you don't think that this will have any affect at all on your crop, other than set it back 1 week?

Let me ask a different question. If we had another freeze right now and it did the same thing(which is not going to happen) and the growing point was still below the soil, would  there still be no affect except to set it back another week.

It just seems like when you kill a weeks worth of top growth and force it to start over, that you just zapped it bad enough and disrupted it, so that it can never catch up to reaching its full potential, even with ideal weather.

This is in addition to the fact that yields tend to be higher if planted earlier(when the crop is allowed to soak up the maximum amount of high angled, energy providing sunshine-that peaks on June 21).

What do you think?

Mike, I cannot say for certain that there is no yield loss but currently the plants look normal. There would have to be a control (which I don not have) to be certain. It seems to me that any stress lowers yield some. There are studies that suggest that Max yield is determined early and yield is lowered by stress never increased. In this case I think that replanting would give a lower yield, and increase cost. I have no clue about a second frost.

I used the example of the 2nd frost to try to amplify the affect in your head X 2.

It's like you said, stress early can reduce potential yield and you know more about this than me but I would think replanting in this case would reduce yields even more  because the new corn plants will have their growing season shifted forward by 2 weeks or so, which is 2 weeks past the best energy producing sunshine which peaks on June 21st.

It also tends to get pollination and filling over when there is more moisture left in the soil. The moisture profile is seasonally depleted with evaporation exceeding rainfall until around October.

It also costs alot more money and work to replant, which is probably not worth it  trying to get an extra X number of bushels/acre, unless the number is in double digits.

I never had sweet corn freeze before and only experienced a bunch of cold tolerant crops(broc. caulif. etc) that I thought were killed when temps got down to the upper teens.

I bought all new plants and put them in a different place but kept the other ones in the ground, just in case they came back. They came back great. The early ones actually did the best because they ripened a bit sooner, before the heat hit which caused them to be tastier.

In the Fall, without question, having some early but not killing frosts on some of my cold season crops always made them sweeter........especially the spinach but also the broccoli.