Monday’s jump is in sharp contrast to just one month ago when, on the day before the contract for May delivery expired, prices plunged below zero and into negative territory for the first time in history. With much of the world still on lockdown and storage rapidly filling, people were worried that there would be nowhere to put the oil. The contract holders were left scrambling and ultimately would do anything — in this case, even pay to have it taken off their hands.

Since then, demand has begun to recover, and worldwide suppliers have reduced output in an effort to support the market. OPEC and its oil-producing allies took 9.7 million barrels per day offline beginning on May 1, and Saudi Arabia, Kuwait and UAE are among the group’s nations that have said they will voluntarily cut production further. Beginning in June OPEC de facto leader Saudi Arabia said it would take an additional 1 million bpd offline.

In the U.S., data from the Energy Information Administration last week showed that production has dropped 1.5 million bpd below March’s all-time high level of 13.1 million bpd. Gasoline demand has also started to show signs of recovery as states begin to reopen economies.

Are Oil Prices Rising Too High Too Soon?

Oil prices have rallied significantly, rising $10 in two weeks as markets are increasingly convinced that global demand for crude is picking up once again.

Deep output cuts and the reopening of some of the largest economies in the world have brightened the outlook for oil, but many analysts are now beginning to question whether this rally isn’t already overdone. So why are oil prices still rocketing as analysts warn of ballooning inventories and continued weak demand for aviation fuel?

Looking at the data, the first signs of real demand recovery are coming from the Far East, where Chinese refiners have embarked on a buying spree, capitalizing on ultra-low crude prices in heavy hit markets such as Brazil, Oman, and West Africa.

Spurred by Beijing’s call to action, factories and farmers are leading the demand recovery in diesel according to Liu Yuntao, an analyst working with Energy Aspects in London.

But it’s not just diesel. Gasoline consumption is also on the rise in China, where rush hour traffic in Beijing, Shanghai, and tens of other big cities is approaching normal levels once again as the Chinese are finding out that coronavirus isn’t spread by driving your car.

OPEC+ cuts oil exports sharply so far in May: trackers

The Organization of the Petroleum Exporting Countries, Russia and other allies, a group known as OPEC+, are cutting supply by a record 9.7 million barrels per day from May 1 to offset a slump in prices and demand caused by the coronavirus outbreak.

Kpler, a company that tracks oil flows, said OPEC+ seaborne oil exports have declined by 6.3 million bpd over the past month towards 27 million bpd, calling the decline a “stunning reversal” from April when producers pumped at will.

Petro-Logistics, another tanker tracker, estimated the producers cut exports by 5.96 million bpd for the first 13 days of May compared to April averages – a “massive” decline, the company posted in a tweet.

According to Kpler, Saudi Arabia is showing the largest cutback. Saudi oil exports have averaged 7.26 million bpd, down 2.24 million bpd month on month. Russia is also making a large reduction of 922,000 bpd in May, Kpler said.

Kuwait and the United Arab Emirates have also reduced shipments significantly. The two countries have loaded a combined 4.25 million bpd onto ships for export, a drop of 1.26 million bpd month on month, Kpler said.

But Iraq has cut exports by 265,000 bpd, Kpler said, suggesting OPEC’s No. 2 producer needs to do more to deliver its pledged cut of 1.06 million bpd in full.

Gasoline Demand Is Set For A Rapid Rebound

- The IEA said in its latest Oil Market Report that global oil demand hit its nadir in April (-25.2 bm/d), and will still be down by 21.5 mb/d in May. But the agency has a somewhat optimistic take on demand recovery for the rest of the year.

- In the U.S., for instance, gasoline demand was down 12 percent in March, year-on-year, and 40 percent in April. But in May, demand will be down 25 percent, and only 15 percent in June.

- In the second half of the year, gasoline demand “returns to normal,” the IEA said.

- But that assumes “no continued impact from confinement measures,” which, to say the least, is a rather large caveat. 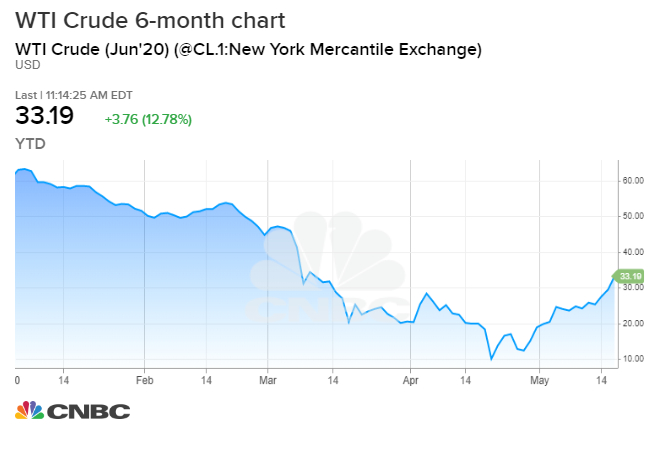 There were dire forecasts of much more pain ahead, and a recurrence of the wild trading was feared for the June contract.

But now the outlook is much improved, as the June contract is set to expire Tuesday. The world has changed, and the ugly crisis created by both oversupply and a sudden lack of demand is beginning to reverse.

“We think fundamental right steps have been taken to get us on sounder footing,” said Helima Croft, head of global commodities strategy at RBC. Croft said the “green shoots of recovery in place,” as Chinese and U.S. demand are improving, and OPEC plus ended its feuding and agreed to sharply cut output.

China has been buying more oil, and its demand is clearly strengthening. U.S. drivers are getting back into their cars as coronavirus shutdown restrictions lift. On the supply side, Saudi Arabia last week added another 1 million barrels a day cut of its own to the OPEC plus deal for a 9.7 million barrel reduction, and America’s oil industry has cut its production quickly and sharply.

Oil prices jumped sharply Monday, rising on the positive developments and a rally in risk markets sparked by Fed Chairman Jerome Powell’s comments that the Fed will can do more to support markets and the economy. WTI futures for June were up 7.4% at $31.62 per barrel in afternoon trading.

Now, the demand side of the market and the supply side are improving in tandem, to reduce the oil glut that was close to filling all available storage facilities, including ships at sea. The fact that the world was running out of places to store oil in April was behind the sharp drop in the futures contract. Investors were unable or unwilling to take delivery of oil, and there were also investors who became trapped in the trade as the selling spiraled. Interactive Brokers took a $109.3 million hit to cover its customers’  losses.