After reading several studies that show whites actually have a greater chance of being killed by cops than blacks, even after accounting for the ratio of blacks vs whites arrested, I still was not convinced and decided to use my own independently obtained data just to see if it confirmed that.

The data is for all ages of race. With young black men, the rate of violent crime is MUCH higher than ALL blacks and the shooting rate is also higher, possibly at the same rate. Here we go:

US Department of Justice

The rate of cops killing a person who committed a crime is highest with violent criminals and is often the metric involved in police killing a suspect that is threatening them with bodily harm. You may say that George Floyd did not commit a violent crime, nor did Trayvon Martin. Very true and both those killings were very  UNjustified...........but we are NOT cherry picking the isolated worst cases here like the MSM does and others do. We are looking at ALL cases. 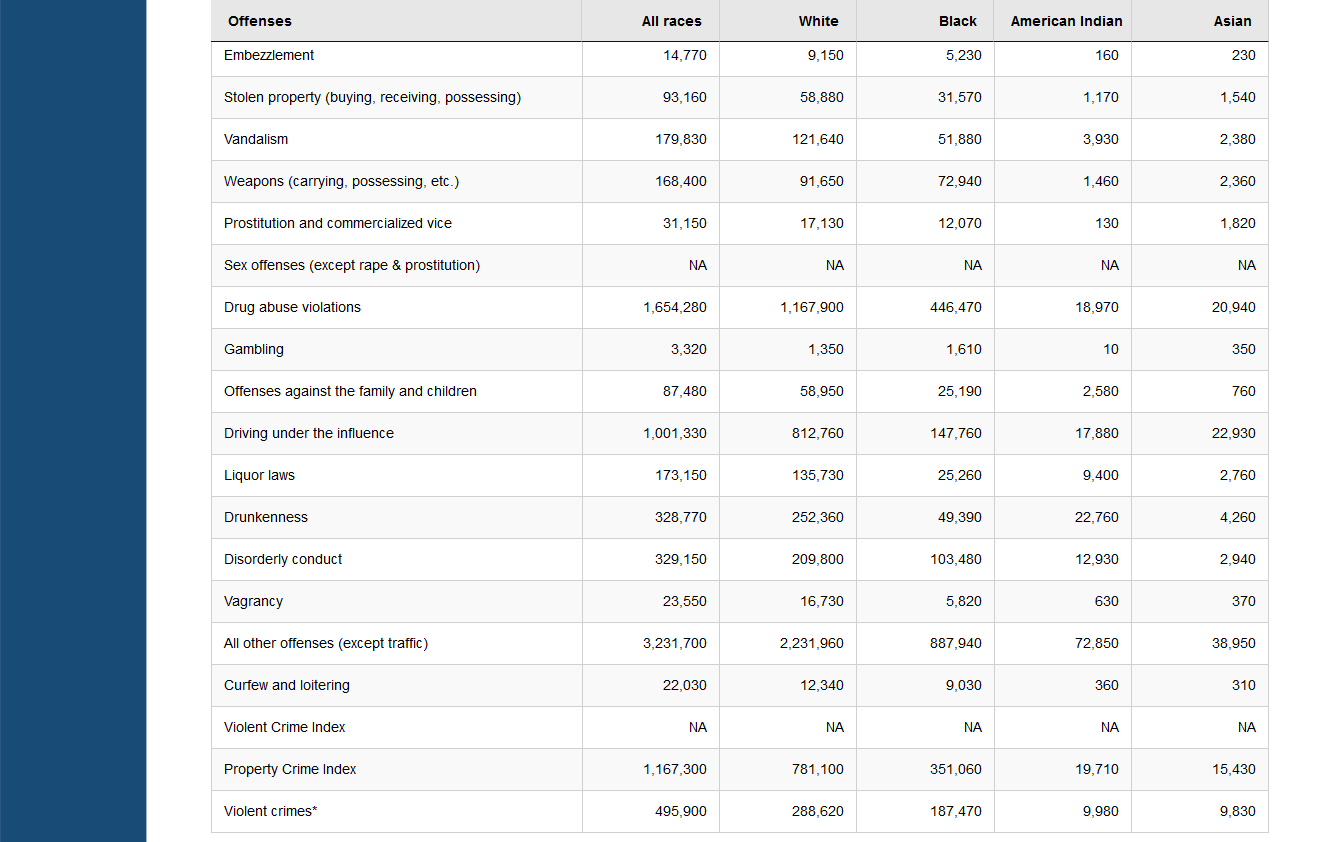 So we have 7.6 times more whites than blacks in the USA. But that does not matter. We are not dealing with law abiding people. We are dealing with the actual people who have encounters, often violent with police..........the criminals.

Regardless of the higher crime rate of blacks, we should then see the same ratio of whites killed, 1.5, to blacks as the rate of actual crimes.

Let's see what the actual rate was. 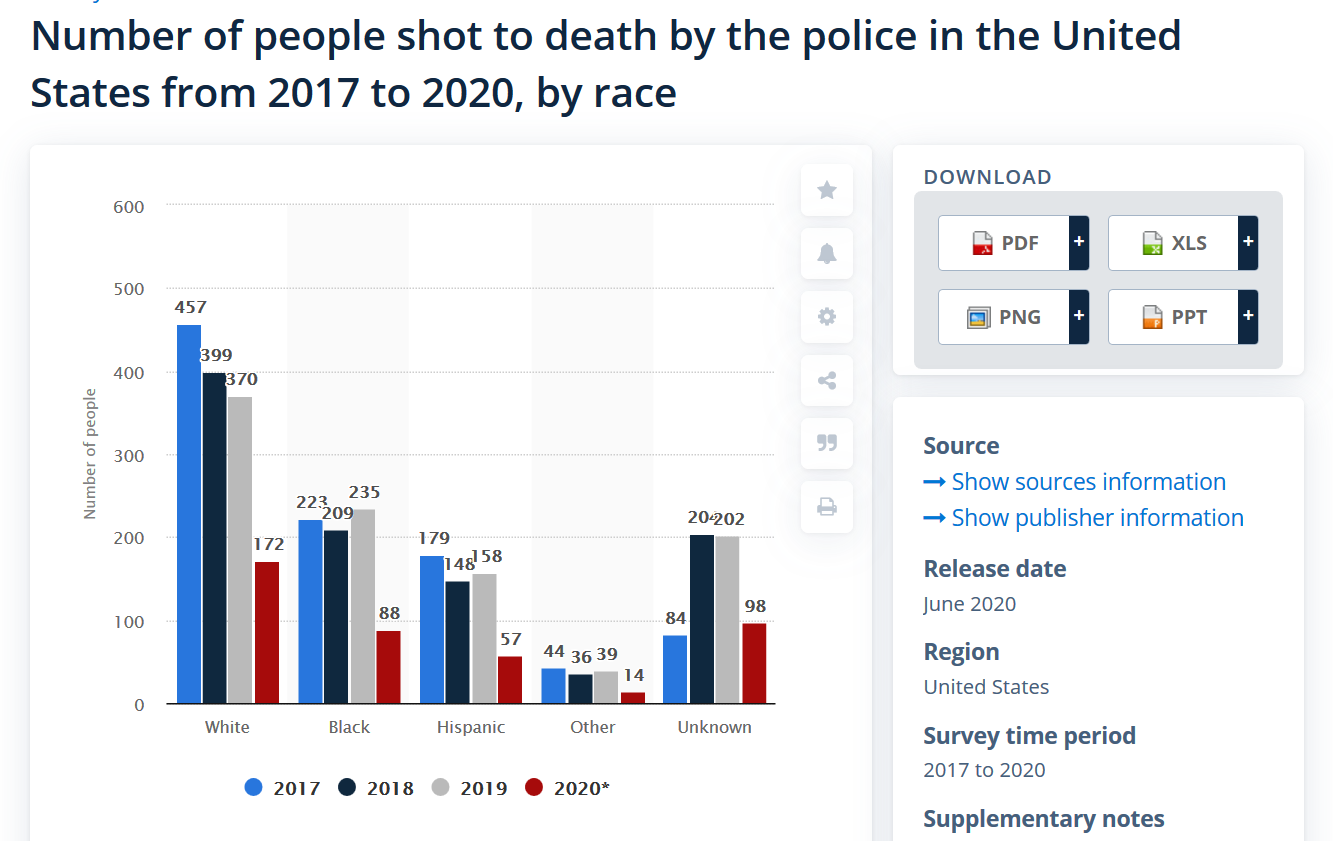 So whites  were being killed at a rate that was 1.9 times higher than blacks during this period.............while they committed violent crime at a rate of 1.5 times higher.

Again, general population has nothing to do with this.

Going from just that number, then whites have a 26% higher chance of being killed by a cop when being arrested for a violent crime.

This result has flaws because the data is not broken  down to shootings/type of crime except for violent crime and the rate of less violent crimes committed by blacks is not nearly as elevated as it is for violent crime, so that I will guess that police could kill more % blacks committing NON violent crimes.

But the point is to present the case that, unlike the way that its presented, blacks ARE NOT being slaughtered by racist cops who see young black men as a target.

If your entire opinion was based on just the  coverage of cops killing people, you would think that they kill blacks at a rate of 50 times higher for blacks than it should be.

When was the time that an unjustified cop killing of a white man made the national news?

So, we are to believe, based on the stats above with more whites being killed, that almost ALL the white killings by cops were justified(because we don't hear about even 1 of them) and almost none of the blacks killed were justfied (because we only hear about unjustified ones).

Clearly, the coverage of black deaths from cops exceeds the reality by  at least an order of magnitude.

Regardless, there have been far, far too many unjustified deaths caused by cops abusing the use of lethal force. Of those actual deaths above, certainly the majority were justified.  But maybe as many as hundreds could have been prevented with better policing.

This is what our goal should be. Not defunding all the real good cops that we need to protect us and keep our communities safe.

Also, the vast, vast majority of black deaths from homicides are from other non cop blacks. If you really want to save black lives............that's the place to maximize it...........and one way is with MORE effective police enforcement not LESS.

And one of the best ways to do that is to provide better educations and job opportunities and family mentoring in the urban areas that are suffering the most with the consequences of the currently failing political policies in the big cities.

Blacks deserve to participate fully in the American dream!

Tearing down statues and monuments because of a cultural revolution that rejects racism of the past is counterproductive and sadly misdirected. You have decided to destroy icons of the past, who lived in a world that featured racism but ARE NOT HONORED FOR THAT.

The great Isaac Newton that gave us the law of gravity benefited from the slave trade. Aristotle, one of the smartest men in history,  wrote articles about how he felt slavery was a good thing.

So destroying statues and reputations of men honored for legit accomplishments for centuries............is suddenly the political thing to do in 2020. Not only is it destructive, it offends people that respect those men for their accomplishments.  It's bull to say that suddenly, after you researched everybody's background and found a racist connection for some of them, that suddenly you are offended. You looked for and found a reason to be offended because YOU WANTED TO BE OFFENDED to justify destroying the statues.

The more relevant question of comparison would be unarmed people killed by cops.

Or, fully apprehended suspects who are subdued and in handcuffs that are then killed by cops.

Yes, I agree with that joj.

Unfortunately, I don't think such a statistic exists. We only have the videos depicting this happening with white cops killing young black men to go by.

If one stepped back and appreciated that cops kill over 600 people a year, more white than black, what are the odds that the only cases we know about are young black men and we don't just know about them..........we know everything, every detail about them, sometimes repeated for many months.

If one did statistics based on random selection of the actual killings, the chances of a single case being a young black man might be 1 out of 4.

Since more than the last 5 have all been young black men, we can safely assume that deaths of young black men killed by cops are intentionally being used.

I will also have to add that, despite me arguing that this is intentionally being exaggerated for the political agenda and to vilify cops, that I don't need to look at any studies about cops profiling to know that this takes place on a widespread basis(largely because young black men are 5 times more likely to have committed a violent crime that makes even non racist cops using over reaching street smarts to target ALL young black males).

And cops DO abuse their power and the use of force against all races.

Again, fixable problems, which is what we should do........not throw the baby out with the bathwater (-: