Up until yesterday, here in sw Indiana, we had received a total of 1.00 inches of rain in our backyard.

Got 2.1 inches of glorious rain late yesterday and another 1.2 inches this morning.

A very dry month, with only a few days left......... just turned into an average one statistically for rain because we got almost a months worth in just 24 hours.

How much did you guys get?

We all remember this slogan as part of the Morgan Salt Company!

Morton Salt is an American food company producing salt for food, water conditioning, industrial, agricultural, and road/highway use. Based in Chicago,[2] the business is North America's leading producer and marketer of salt. It is a subsidiary of the German mining company K+S.

The company began in Chicago, Illinois, in 1848 as a small sales agency, E. I. Wheeler, started by the Onondaga salt companies to sell their salt to the Midwest. In 1910, the business, which had by that time become both a manufacturer and a merchant of salt, was incorporated as the Morton Salt Company.[3] It was named after the owner and founder, Joy Morton, the son of J. Sterling Morton[4] who founded Arbor Day. Joy Morton started working for E. I. Wheeler in 1880, buying into the company for $10,000, with which he bought a fleet of lake boats to move salt west.[5] In 1969, the name 'Morton-Norwich' came into use.[6]

In 1896, Alfred Bevis founded the Bevis Rock Salt Company, building on the failed Lyons salt company he had previously invested in and run.[7] His daughter, Florence, married Dr. Charles Howard Longsterth, whom Bevis brought into both the Lyons and Bevis salt companies as an executive.[7][8] Their son, Bevis Longstreth, became president and general manager on his return from service in World War I.[8] In 1919, Morton Salt acquired Bevis.[8][9] About ten years later, Bevis Longstreth founded Thiokol Corporation, which merged with Morton Salt in 1982 to form Morton-Thiokol. This merger was divested in 1989, following the 1986 Space Shuttle Challenger disaster, which was blamed on Morton-Thiokol products. Morton received the company's consumer chemical products divisions, while Thiokol retained only the space propulsion systems concern.

In 1999, Morton Salt was acquired by the Philadelphia-based Rohm and Haas Company, Inc. and operated as a division of that company[3] along with the Canadian Salt Company (which Morton had acquired in 1954).[4]

On April 2, 2009, it was reported that Morton Salt was being acquired by German fertilizer and salt company K+S for a total enterprise value of US$1.7 billion.[10] The sale, completed by October 2009, was in conjunction with the Dow Chemical Company's takeover of Rohm and Haas.[11][12][13]

The Morton Salt Company's current headquarters office is in the River Point building at 444 West Lake Street in Chicago, becoming its first tenant in December 2016. Its previous headquarters was at 123 North Wacker Drive. Prior to its acquisition in 1999, the firm's corporate headquarters was at 100 North Riverside Plaza (later the headquarters of Boeing) and before that at 110 North Wacker Drive and 208 West Washington Street[14] Morton operates a research & development laboratory in Elgin, Illinois, and produces salt at eight vacuum evaporation plants, six underground mines, five solar evaporation plants, and five packaging facilities across the United States, Canada, and The Bahamas.[15]

Acquired in 1954,[4] the company owns the second-largest solar saline operation in North America, in Matthew Town, Inagua, The Bahamas.[16]

Morton Salt's logo features the "Morton Salt Girl," a young girl walking in the rain with an opened umbrella and scattering salt behind her from a cylindrical container of table salt, and is one of the ten best-known symbols in the United States.[17]  The company's logo and its motto, "When it rains, it pours", both originating in a 1914 advertising campaign, were developed to illustrate the point that Morton Salt was free flowing even in rainy weather. The company began adding magnesium carbonate as an absorbing agent to its table salt in 1911 to ensure that it poured freely. However, around 1958, the company realized that their salt was not living up to their slogan. A chemist, Richard A. Patton, was given the assignment to solve this problem. He invented a machine that would coat the salt with a byproduct of salt mining, magnesium oxide. Calcium silicate is now used instead for the same purpose.[3] The same chemist developed a total of 27 patents, along with fellow chemists, that expanded Morton's commercialization of magnesium oxide. The Morton Salt Girl, also known as the Umbrella Girl, has gone through seven different iterations, including the latest update in 2014 for its "hundredth birthday", with other updates being in 1921, 1933, 1941, 1956, and 1968;[18][19] the company sells associated memorabilia[20] and makes some of its vintage advertisements freely available.[21] In addition to the Morton Salt Girl being updated, its centennial in 2014 was celebrated with 100 parties in 100 cities, Morton Salt Girl Centennial Scholarships to benefit certain fine arts and culinary arts students at the School of the Art Institute of Chicago and the Kendall College School of Culinary Arts, Morton Salt Girl day at Wrigley Field, Facebook and Instagram lookalike contests, and other activities.[18][22] Also in 2014, the Morton Salt Girl was voted into the Advertising Week Walk of Fame on Madison Avenue in New York City; it is the first girl icon to be inducted.[

One of the interesting things I found was that, while “when it rains, it pours” commonly has a negative connotation, the original, high-profile use that popularized the saying was designed to be positive.

Until then, most table salt was sold in a raw, coarse-grained form that clumped and caked when rainy weather made the air in a house even slightly humid.

“When it rains, it pours” started out as a good thing… 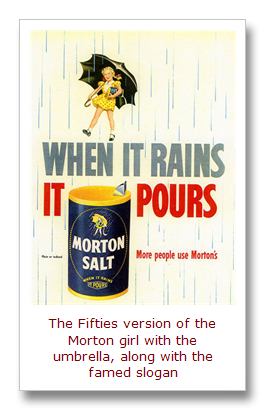 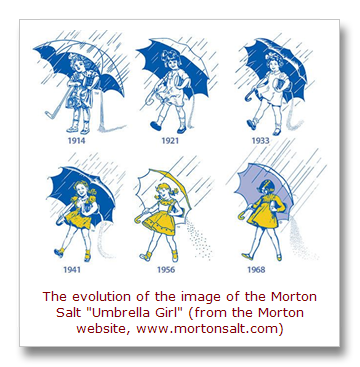 The Morton food scientists solved this problem by reducing the grain size and adding a small amount of magnesium carbonate, an anti-caking agent.

As a result, the salt didn’t cake and clump. It could be poured or shaken out as nicely as dry sand, even when it was humid indoors due to the weather.

Those storms trained all evening over the same areas. Parts of Illinois just to your west received up to 6" of rain. It was a good thing the ground was so dry or there would have been a lot of flooding. Models are hinting at another significant rain event over the next 48 hours, this time closer to St. Louis.

Another big rain event on top of us this evening.

Over an inch in the rain gauge 90 minutes ago.

I got .9 inches from these showers.

We are in wonderful shape, here in the Garden spot of IN.

How about you guys?

The forecast models have you right on the break between wet and dry mcfarm. Let's hope for it to shift slightly farther north but I'll be optimistic and say that you will get the big rains.......the NWS has you doing pretty good.

Current rain event in the Upper Midwest will be the last one for quite awhile..there and N/C Plains too.

The break between heavy and light is sharp and could shift with you and mcfarm, barely into the heavy. cutworm near the heaviest(and his farm is not that far away from mcfarm's).

bowyer is on the edge but still might have some rain.

Farther north the rain all goes south of us

It so dry, we planted some beans into harvested sweet corn ground

Planting into dust. Ground so hard lifts the wheels off the ground. That means the entire planter weight is riding on planting units

Corn is holding with most pollination done

Usually this time of yr we will get something