1908 – The Tunguska Event, the largest impact event on Earth in human recorded history, resulting in a massive explosion over Eastern Siberia.

1937 – The world's first emergency telephone number, 999, is introduced in London.

The Tunguska event was a large explosion that occurred near the Podkamennaya Tunguska River in Yeniseysk Governorate (now Krasnoyarsk Krai), Russia, on the morning of 30 June 1908 (NS).[1][2] The explosion over the sparsely populated Eastern Siberian Taiga flattened an estimated 80 million trees over an area of 2,150 km2 (830 sq mi) of forest, and eyewitness reports suggest that at least three people may have died in the event.[3][4][5][6][7] The explosion is generally attributed to the air burst of a stony meteoroid about 100 metres (328 feet) in size.[8]:p. 178 It is classified as an impact event, even though no impact crater has been found; the object is thought to have disintegrated at an altitude of 5 to 10 kilometres (3 to 6 miles) rather than to have hit the surface of the Earth.[9] 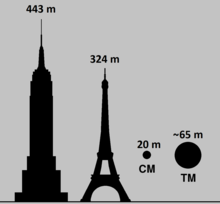 The leading scientific explanation for the explosion is the air burst of an asteroid 6–10 km (4–6 mi) above the Earth's surface.

Meteoroids enter Earth's atmosphere from outer space every day, travelling at a speed of at least 11 km/s (7 mi/s). The heat generated by compression of air in front of the body (ram pressure) as it travels through the atmosphere is immense and most meteoroids burn up or explode before they reach the ground. Early estimates of the energy of the Tunguska air burst ranged from 10–15 megatons of TNT (42–63 petajoules) to 30 megatons of TNT (130 PJ),[38] depending on the exact height of the burst as estimated when the scaling laws from the effects of nuclear weapons are employed.[38][39] More recent calculations that include the effect of the object's momentum find that more of the energy was focused downward than would be the case from a nuclear explosion and estimate that the air burst had an energy range from 3 to 5 megatons of TNT (13 to 21 PJ).[39] The 15-megaton (Mt) estimate represents an energy about 1,000 times greater than that of Hiroshima bomb, and roughly equal to that of the United States' Castle Bravo nuclear test in 1954 (which measured 15.2 Mt) and one-third that of the Soviet Union's Tsar Bomba test in 1961.[40] A 2019 paper suggests the explosive power of the Tunguska event may have been around 20–30 megatons.[41]

Since the second half of the 20th century, close monitoring of Earth's atmosphere through infrasound and satellite observation has shown that asteroid air bursts with energies comparable to those of nuclear weapons routinely occur, although Tunguska-sized events, on the order of 5–15 megatons,[42] are much rarer. Eugene Shoemaker estimated that 20-kiloton events occur annually and that Tunguska-sized events occur about once every 300 years.[38][43] More recent estimates place Tunguska-sized events at about once every thousand years, with 5-kiloton air bursts averaging about once per year.[44] Most of these air bursts are thought to be caused by asteroid impactors, as opposed to mechanically weaker cometary materials, based on their typical penetration depths into the Earth's atmosphere.[44] The largest asteroid air burst to be observed with modern instrumentation was the 500-kiloton Chelyabinsk meteor in 2013, which shattered windows and produced meteorites.[42]