Export inspections of U.S. #corn and #soybeans continue on a much faster pace than a year ago. Some 1.49 mmt of beans and 330kt corn were inspected for #China. #Wheat was below expectations. 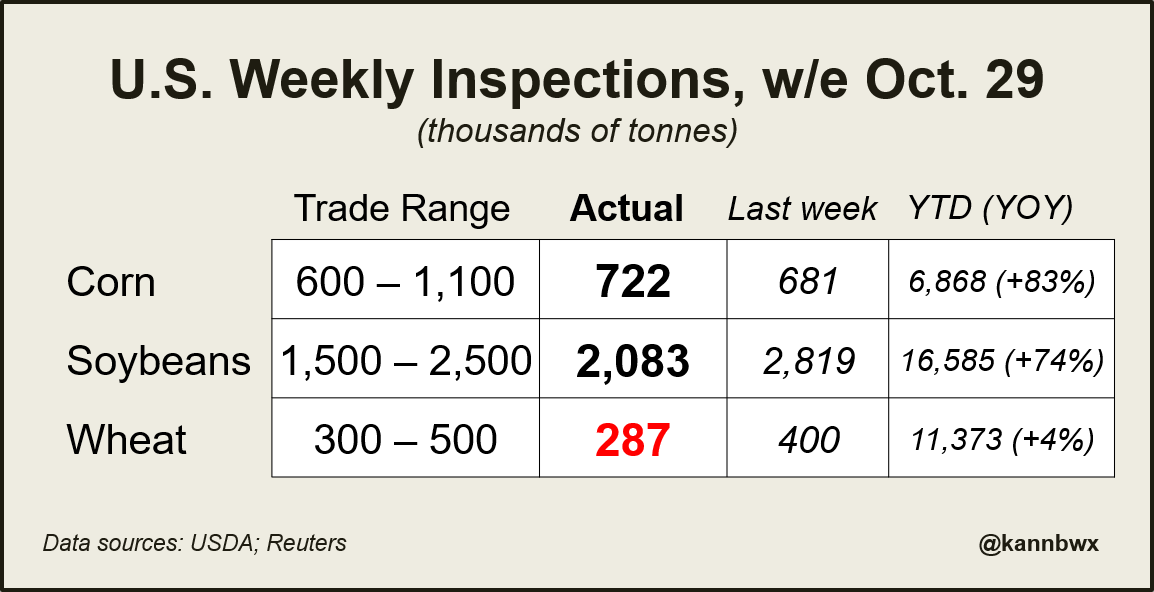 (Washington, D.C., October 26, 2020) – On November 6, 2020 at 3:00 p.m. EST, the U.S. Department of Agriculture (USDA) will release select tables prepared for the upcoming USDA Agricultural Projections to 2030 report. USDA will post online tables containing long-term supply, use, and price projections to 2030 for major U.S. crops and livestock products, as well as supporting U.S. and international macroeconomic assumptions. The short-term projections from the October 9, 2020 World Agricultural Supply and Demand Estimates report are used as the starting point.

Those tables will be posted in MS Excel format simultaneously to the Office of the Chief Economist’s (OCE) website and to the Economic Research Service’s (ERS) website. Additional data visualizations and supporting content will be available at the ERS Agricultural Baseline Database.

The complete USDA Agricultural Projections to 2030 report will be released in February 2021 and will include a full discussion of the commodity supply and use projections, and projections for farm income and global commodity trade.

Reuters reporting that a shipment of 38,000 tonnes of U.S. #soybeans bound for #Brazil is loading at the Gulf. If true, that is the largest such shipment since December 1997. 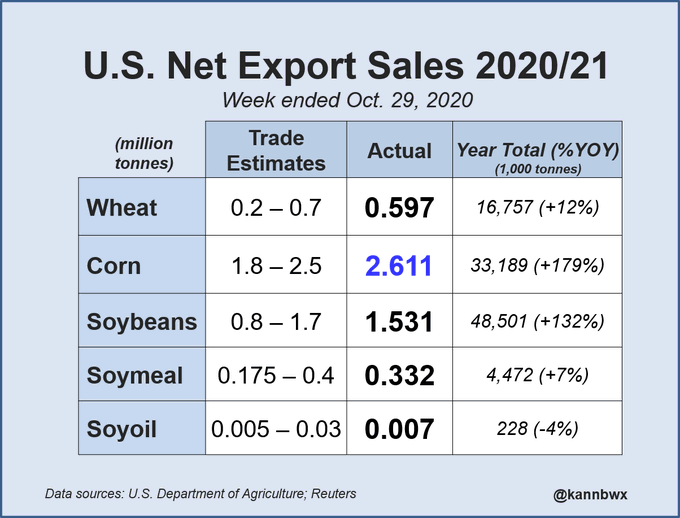 metmike: This is huge!

Congrats to our US producers!

I suggest that those who consider forward contract sales on their crops, do consider some sales on the way up here over the next 2 months. There is no way you can't make a nice profit at these prices. Do not try to pick a top and do assume, that when we are within shouting distance of the Brazil harvest, let's say in January, that prices could plunge from a spike high before then(from rationing the shortage of old crop).

Leave the speculation to the speculators who make and lose money based on taking on risk. Farmers are interested in taking OFF risk.

The biggest risk in selling beans early is having a drought on your farm in 2021. This can be protected by replacing the sales with calls, if you are comfortable with that strategy.

Then there is crop insurance in case you have a failure. I am not an expert on the rules regarding this protection.

I am just suggesting that you consider locking in some wonderful prices for a small portion of your 2021 crop if/when we get some crazy spikes higher here,  especially beans as the market bids up the price to ration the remaining(short) old crop.

Use the market to maximize your 2021 profits.

SAO PAULO (Reuters) - Brazil’s agriculture ministry has issued a regulation facilitating imports of genetically modified (GMO) soybeans from the United States, it said in a statement in response to questions from Reuters.

The statement sent late on Thursday said the regulation conferred legal security to imports of grains from the United states “by recognizing the equivalence of genetically modified events approved in the United States and in Brazil”.

Brazil is the world’s top producer exporter of soybeans but this year, local farmers have sold such huge volumes to top importer China that little was left for domestic consumption.

The situation led to price rises for feed for animal farming and meatpacking operations in Brazil, and contributed to food price inflation.

Since then, at least one U.S. soybean cargo was sold to Brazil. The vessel Discoverer, chartered by Louis Dreyfus Company (LDC), is due to arrive at Brazil’s Paranaguá port on Nov. 26 carrying 30,000 tonnes, according to latest ship line-up data from maritime agency Cargonave which was updated on Thursday.

The ministry of agriculture’s rule was published in the official gazette on Nov. 4, according to the statement.

Brazil is poised to import 1 million tonnes of soybeans this year, according to a forecast by Brazil’s oilseeds crushing group Abiove, the highest volume since at least 2008.

So far this year, Brazil imported 528,000 tonnes of soybeans, mainly from Paraguay, the most since 2014, according to government trade data.