Perhaps we should look at what those stks will "buy or purchase" in the future?? more, the same or less???

However, it seems that M1 money has increased substantially in Nov/Dec. 2020. Now for you and me, M1 is cash. M2 is cash, CD's etc which includes cash but also less liquid forms of ready cash. M1 is cash available at the drop of your hat in your savings acct.

So why did M1 increase

Some possible answers: There is a tax loop hole which allows capital gains to be taxed at less than regular income tax. As we mostly all know, capital gains has been the source of many wealthy people to increase their wealth. Many expect Biden to close the capital gains lower tax rate loop hole as he goes after billionaires etc with higher taxes. So: It follows that a lot of wealthy people are cashing in on capital gains while the rate is lower than regular income.. This has been happening slowly as large sales would send the value of their stk down, so they sell slowly to the retail trade

Not only are wealthy people selling stks but also high priced real estate. The proof is those who are qualified to put a value on real estate, to satisfy the IRS, can't keep up to the demand, especially in NYC. If this isn't proof that wealthy people are cashing out, one wonders what you need for proof. In fact, a lot of assets with a capital gains tax is probably being converted to cash, when one sees the dramatic increase of M1 especially in Nov/Dec as tax planners advise wealthy clients, how best to avoid Biden's new tax policy

There is another theory and that is a lot of people expect some big bills to come due as the mortgage thing won't last forever, and people are putting cash aside to pay large back mortgage payments. So where did that mortgage money come from. some think smaller investors are selling stks to become liquid when the need for cash is immediate. CD's have a penalty for early cash out, so when it matures in short term deposit, people are cashing out

So: If any of the above are true, what happens. Some opine that if that cash enters the main stream, then there will be too much cash chasing too few goods

In other words if the tax is paid, then luxury goods may become a hot ticket. In our neck of the woods, RV, ski DO's, ATV 4WD, bicycles etc  as people want to escape the 4 walls of their apt. People might want a 5 acre escape home in the woods

So: If this money stays locked up in savings accts at 0.23% int. then things mostly stay the same. But 0.23% int isn't going to entice very much cash to stay in savings, if you look at the bigger picture

So:  if this cash finds it's way into main Street, then one could have inflation, assuming  the Fed continues to buy assets and print money to support out of control spending, and the people decide to spend money on a 5 acre spot in the woods to build a cabin, or an RV or???

So then the question becomes

What is the purchasing power of the dollar going to be in 2021???

I moved this wonderful topic over to the trading forum for you.

Seems to me that inflation is almost inevitable at some point in the near future.

Get Ready for the Great U.S. Inflation Mirage of 2021

The story of U.S. inflation in 2021 could very well amount to this: It’s all a mirage.

Americans are likely to see prices jump across a variety of sectors next year, thanks in part to Covid-19 vaccines that will potentially turbocharge demand for such pandemic casualties as travel and tickets to sporting events.

With prices also climbing for some inputs such as copper and lumber, inflation could very well reach or surpass the Federal Reserve’s 2% target in some months. Financial markets are increasingly pricing in higher inflation in coming years, and debates over whether the central bank should start easing back its record monetary stimulus may intensify.

But one critical ingredient will be missing to sustain higher inflation: a tight labor market.

Many economists discount the odds of a longer-lasting acceleration and note that even if inflation metrics look like they’re rising in coming months, it’s partly a reflection of math. Unemployment is expected to remain elevated throughout the year, and a resurgence in demand for services could be offset by softness in rents and some goods such as used autos.

“We think inflation is going to be muted because unemployment will still be high,” said Michael Feroli, chief U.S. economist at JPMorgan Chase & Co. “There will still be slack in the labor market, which would keep some pressure on wages.” 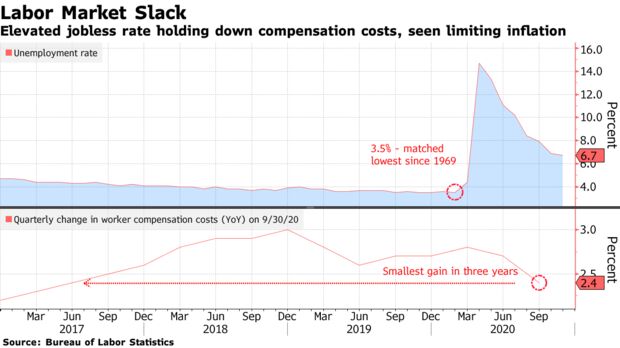 On Thursday, the Labor Department will issue its consumer price index for November. The median forecast of economists surveyed by Bloomberg calls for a subdued 1.1% year-over-year increase.

Investors are betting more and more, though, that inflation won’t stay so muted.

The 10-year breakeven rate -- a market-based measure of average inflation rates over the next decade -- on Friday reached 1.91%, its highest since May 2019. That key gauge, garnered from inflation-protected securities and standard Treasuries, has surged since touching an 11-year low of 0.47% in March.

This year’s sluggish spending on services will probably give way to a resurgence throughout 2021 as the nation gets vaccinated. That means Americans will be more at ease partaking in activities such as trips to Disney World, attending Major League Baseball games and enjoying indoor dining at their favorite restaurant -- developments that may give service providers the wherewithal to raise prices.

Services make up about 60% of the overall consumer price index and 75% of the core measure, which excludes food and energy.

In a Bloomberg Opinion piece last week, former New York Fed President Bill Dudley wrote that a rebound in spending on services suggests “sharp price increases might even be needed to balance demand with the available supply, which the pandemic has undoubtedly diminished.”

The result: Those who see few signs of excess inflation “could be setting themselves up for an unpleasant surprise,” Dudley said.

One issue in the pipeline: so-called base effects will lead to higher inflation. Price indexes early next year will be compared with the sharp retreats experienced in March and April, which may push inflation to, or above, the Fed’s 2% goal.

Gauges of input prices and costs paid by businesses are also perking up as of late, though factories still have plenty of slack in capacity. 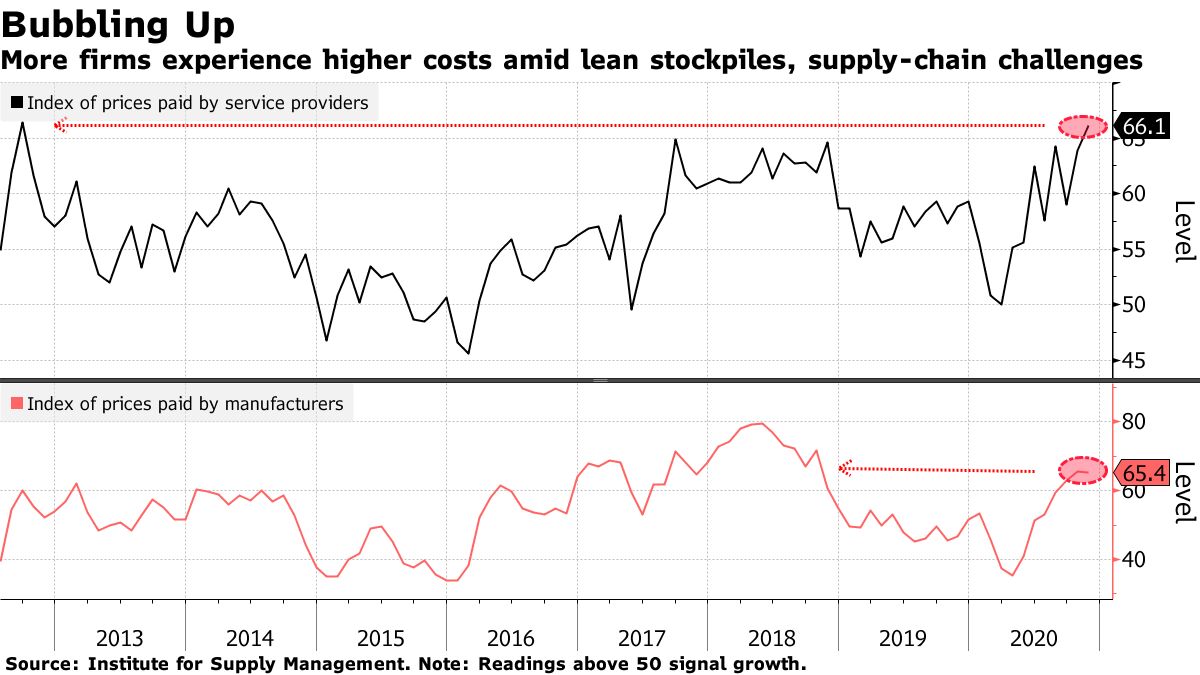 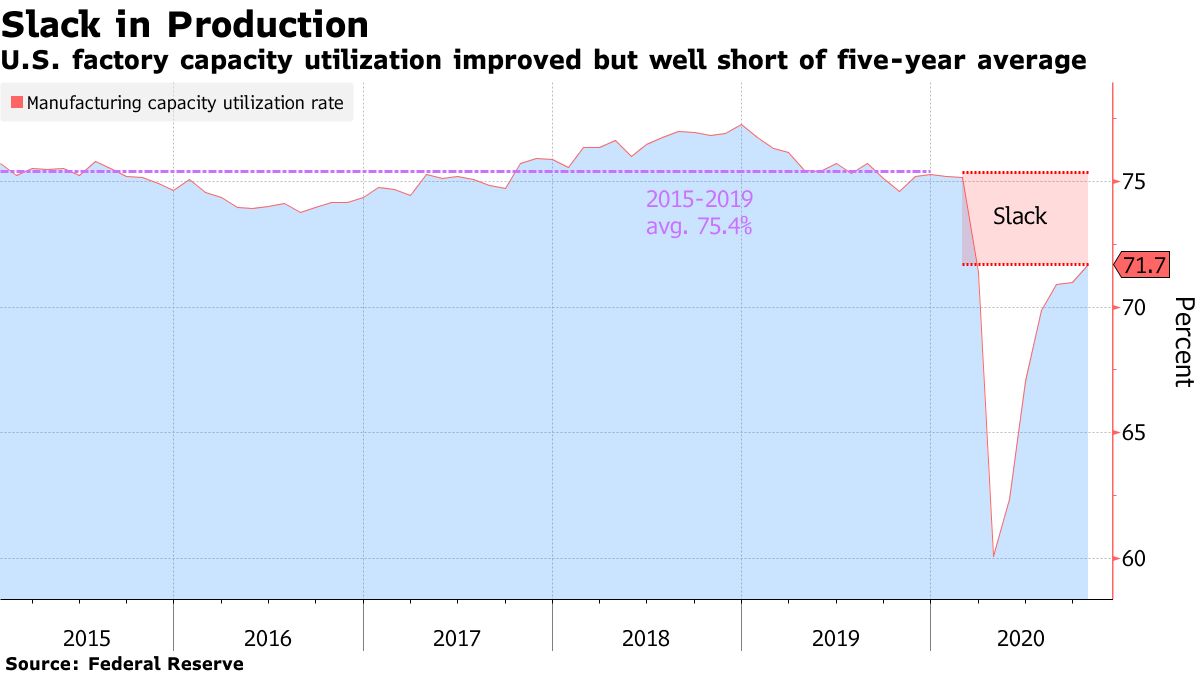 Another sector that may see higher inflation is medical care, as providers try to recoup some of the revenue lost during the pandemic, said Sarah House, senior economist at Wells Fargo & Co.

Another factor is that “inflation expectations remain well within their historic range,” House said.

Something that was missed in the above is the Fed has said it would accept an average 2 % inflation using back yrs to average. Now this Fed statement isn't very clear, as  the average could be what ever the Fed decides is an average 2 %

Another thing most people don't think about is the  purchasing power of things and goods within the USA. However, the dollar has been going down as an index to other currencies

For example: We bought a new combine being made in Belgium of all places. So the purchase price of this combine is valued in USD vs EU currency converted to CAD

If the USD dollar goes down vs EU currency then the combine will cost us more. The seller would not lock the currency as this is just the way it was. The price is very high but so was our trade in but the difference is what counts

USD vs EU currency vs CAD

On the other hand if the USD goes down, the amount of corn we have left to sell should increase thus it is sort of a wash

But USD index on world currency markets does make a difference to prices of lumber, imported oil or any imports used within your country and ours

Our loonie has been going up vs the USD but very slowly. Does that mean the USD is losing purchasing power on world markets

I have no idea where we go from here, but the above is a real example of what we deal with in world markets

My oldest son buys steel by the truck load. I have no idea if this is from a local mill or imported steel. He has to order now for April delivery and how much. So: If he gets a large order will he have enough raw inventory, or if the sales do not come then too much inventory or???

With prices fluctuating, he was forced to add a rider in all of the quotes for raw material fluctuation. If this steel is imported then it will be priced in USD vs were the steel comes [Perhaps from  the U.K or???]  vs CAD vs back to USD if the buyer is americian which most buyers come from

Any way the point I wanted to make is inflation or more properly described, as purchasing power is more than just buying and selling within the USA

Let's not get into the Fed providing liquidity for world central banks for such countries as Spain or Greece or??? which should be the ECB but the USD is affected by ECB decisions or more accurately Germany

look at that chart of the CRB.  not much move up (yet).  but we are just now hitting up against that declining resistance line.

CRB today is still lower than what it was more than a year ago,  in spite of all the money printing.

yes, sooner or later the fiat will hit the fan.  but sometimes it take a while.

(armstrongs explanation is that money printing, stimulus, have not been as big as wealth destruction, shutdowns).

remember, my belief is... sooner or later the fiat hits the fan. (but not necessarily when you expect it).