For comparison, the CDAS global surface temperature anomaly for the last 30 days at Weatherbell.com was +0.31 deg. C.

Cooling in December was largest over land, with 1-month drop of 0.60 deg. C, which is the 6th largest drop out of 504 months. This is likely the result of the La Nina now in progress.

metmike: The current La Nina, cool waters in the East/Central Tropical Pacific is what was responsible for most of the cooling. Looks like the apocalyptic warming continues to be delayed...........as we continue to hear that it's much worse than expected/predicted.

Blue shades below are the La Nina. 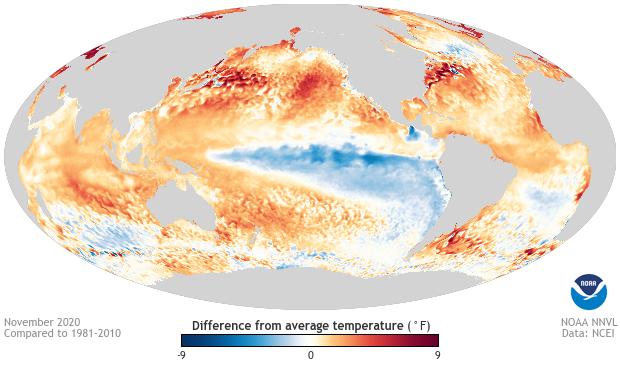 La Niña continued to gain strength in November as we approach the normal peak for these events in the Northern Hemisphere winter—usually November–January. Forecasters estimate at least a 95% chance that La Niña will last through the winter, with a potential transition to ENSO-Neutral during spring 2021 (~50% chance).

La Niña sticks out like a sore thumb when taking a gander at a map of sea surface temperature anomalies (the difference from the long-term average) over the Pacific Ocean. The Niño3.4 region of the tropical Pacific (the area we look at for determining ENSO status) was much cooler than the La Niña threshold of -0.5°C, at -1.4°C below average for November according to the ERSSTv5 dataset. In fact, the Niño3.4 region surface temperature anomaly has been lower than -1.0°C for the last two months, and the November anomaly was the seventh lowest of all Novembers going back to 1950.

i'm sure, some will try to find a way to claim that this record low is due to global warming.

Of course it's just weather as you know bear.

Remember when the polar vortex caused record cold in the US in early 2014?

President Climate Crisis, unleashed his climate change czar on us to do some damage control to tell us exactly what you stated..........coming directly from the White House.

So basically, we needed to know that global warming causes all bad weather,  EVERYTHING to get worse. Even cold and snow.

“A growing body of evidence suggests that the kind of extreme cold being experienced by much of the United States as we speak is a pattern that we can expect to see with increasing frequency as global warming continues,” Holdren asserts. Watch it:"

Climate science in todays world is nothing but politics.