It still doesn't impact the 1st amendment per se',  but does anyone see what's happening here?

Some of this censorship, like they imposed on the NY Post and others in October to protect the Bidens was dead wrong/corrupt.

Or how the gatekeepers mainly allow stories about climate to be about the fake climate crisis.

However, after seeing how one side  abused its voice, making up a stolen presidential election scenario to brainwash tens of millions of people  with lies.......who fell for it because it sounded so dang convincing and it's exactly what they   wanted to hear..............I can really see the point of doing things like this for the best interest of the country.

But the problem with that ends up being with the ones having the power to censor, being imperfect and like most people, having personal political views.

In the case of Trump and the election, it just seems so egregious and has done so much harm that  the decision to ban him on Twitter seems pretty reasonable.

In the  aftermath, we are left with attempts by some sincere entities that are censoring to do damage control for our country's best interest.

We absolutely must try to put a stop to this widespread, greatly damaging lie about this past presidential election.

It was proven beyond a shadow of a doubt to be an authentic, legal, solid win by Biden

It was not stolen. There was no major, widespread fraud.

I've been going back and forth on this one but can see the direction in the big picture leading us down the wrong path.

I don't agree with everything on FOX news but agree strongly with their right to state it.

In this current environment, they may be the next ones to go, unless they morph into being less conservative or get rid of Hannity and Carlson and Ingram.

I watch a ton of CNN and listen to NPR anytime I'm in the car during the weekday.

They have some far more extreme stuff from the left side from my independent, objective view than FOX does from the right.

Nobody tried to shut the left and their sources up over the Summer when hundreds of sometimes violent/deadly riots were raging for months across much of the country and the left strongly encouraged these people to continue to protest, knowing that so many of those protests would, with 100% certainty feature more rioting and deaths.

So we have one bad incident from the right and its time to censor that entire side?

Mike, "one bad incident" is the only way you put it? How about an unprecedented incident to take try to kill Pence, Pelosi, and others and to take over the US Congress? THAT'S TREASON AND AN ATTEMPTED COUP!!!!!!!!!!!!!! ENOUGH ABOUT THE WHATABOUTISM THAT IS IRRELEVANT TO WHAT"S NOW GOING ON!! THEY MUST BE STOPPED!!! F*ck them!

Private companies can silence anyone they want to just like you can and have banned posters here.

There was ZERO censorship at any time of any sources from the left that were encouraging people to protest............even more so than Trump, they knew that many  protests, that went on for numerous months were violent and deadly.

They made up the really fake narrative that "there is no evidence that the protests spread COVID" which still goes unchallenged today.......except by me.

Why was there ZERO censorship and in fact encouragement of the REAL events that destroyed REAL property and killed REAL people below while making our country extremely divided? 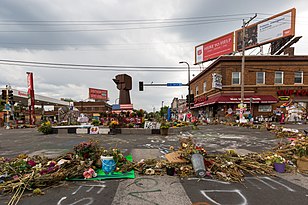 List of monuments and memorials removed during the George Floyd protests

Note: The list of citations for monuments/statutes and memorials removed, destroyed or vandalized is almost 500 items long.

The answer to why the much more deadly and damaging events were allowed, even encouraged and the less damaging and deadly incident (that was bad) is resulting in an extreme reaction is.........mainly politics.

I totally agree that what happened last week was horrible and there should be consequences that fit the crimes.

But then, for something(s)100 times worse to be encouraged because its for a righteous cause is hypocritical.

Killing people and doing billions in damage is what happened. The activity that caused it to continue for months should have been SHUT DOWN immediately, not encouraged.

Additionally, thousands of others died from the COVID that the protests spread.

For centuries, the USA has been the role model for other countries, when it comes to Free Speech. Very few countries give their citizens the right to express their view freely.

This is now changing.

Communicating via a spokesman, Chancellor Angela Merkel called the move “problematic,” and "social media giants shouldn’t have the power to decide who has the right to free speech."

“This fundamental right can be intervened in, but according to the law and within the framework defined by legislators — not according to a decision by the management of social media platforms,” said the statement.

The French government said it is “shocked” at Twitter’s banning of President Trump, asserting that Big Tech is a threat to democracy.

Finance Minister Bruno Le Maire said that “the digital oligarchy” was “one of the threats” to democracy and should be reigned in by the state.

How times have changed... so, other countries are telling the US now how to deal with Free Speech.

more on this here...

Great points and articles to back it up Gunter!!!!

Social media platform Parler has sued Amazon over its decision to take the controversial site offline.

In a complaint filed in U.S. District Court for the Western District of Washington, Parler alleges that Amazon is violating antitrust laws by “severely restraining commerce in the microblogging services market.”

"It is also apparently designed to reduce competition in the microblogging services market to the benefit of Twitter," Parler added, noting that Amazon and Twitter recently "signed a multi-year deal."

Amazon announced over the weekend that it planned to stop hosting Parler due to “repeated violations” of Amazon's rules, including prohibitions on encouraging and inciting violence.

Google Play removed Parler's app on Friday, while Apple's App store did the same on Saturday. But users could still access the platform from the web until later Sunday, when Amazon suspended service.

Parler on Sunday sought an emergency restraining order that would have prevented Amazon from moving forward with Parler's suspension.

“This death blow by [Amazon] could not come at a worse time for Parler -- a time when the company is surging with the potential of even more explosive growth in the next few days,” the company writes. “Worse than the timing is the result -- Parler has tried to find alternative companies to host it and they have fallen through. It has no other options. Without [Amazon], Parler is finished as it has no way to get online.”

Amazon shut down Parler before a judge ruled on that request.

Parler is likely to have an uphill battle in court, according to Santa Clara University law professor and internet expert Eric Goldman.

“I doubt the claims can win,” Goldman says, adding that Parlor's claims are “way too weak” for the company to obtain a restraining order against Amazon.

Goldman elaborates that Parler's allegations related to antitrust aren't detailed enough to support a claim that Amazon and Twitter are in a conspiracy to restrain competition. Parler's antitrust claim rests on an allegation that Amazon and Twitter entered into a contract, but Parler doesn't spell out how or why Amazon would shut off Parler as a result of that contract.

FOX news should be careful. They could be next!

Facebook announced on Monday it is removing all content that contains the phrase “stop the steal” ahead of President-elect Joe Biden’s Inauguration Day on Jan. 20.

The company issued a statement saying it was removing content containing the phrase that was used by supporters of President Donald Trump to question the integrity of the 2020 general election. Trump supporters held multiple rallies across the country called “Stop the Steal” following the Nov. 3 election.

The social media company said that the move is an attempt to remove content that “could incite further violence during these next few weeks.” Content will be removed under the company’s Coordinating Harm policy.

“We’ve been allowing robust conversations related to the election outcome and that will continue,” Facebook officials Guy Rosen and Monika Bickert said in a statement.

“But with continued attempts to organize events against the outcome of the US presidential election that can lead to violence, and use of the term by those involved in Wednesday’s violence in DC, we’re taking this additional step in the lead up to the inauguration.”

This comes as big tech companies ramped up efforts to police content that they claim could lead to potential harm offline. The companies’ latest round of content policing started after pockets of civil unrest and acts of violence marred otherwise peaceful protests at the U.S. Capitol on Jan. 6.

A group of rioters and a minority of protesters waving American and Trump flags illegally stormed the Capitol building as lawmakers were counting electoral votes in a joint session of Congress. Clashes on the day left five people dead—three for medical reasons—and dozens of police officers injured.

Facebook said that it has teams working 24/7 to enforce its policies days leading up to and around Jan. 20. They said they have already removed a significant number of posts.

“We will keep our Integrity Operations Center operating at least through January 22 to monitor and respond to threats in real time,” the company said.

The company, which has indefinitely suspended Trump’s account on the platform, has also paused ads in the United States about politics and the elections and said it would keep a number of measures and restrictions that put in place before the U.S. elections, such as not recommending civic groups for people to join.

A “news digest” will be added to the platform’s news section so that its users can “find reliable news” about Jan. 20, the company added.

The targeted moderation by Facebook, Twitter, and other Silicon Valley companies have raised concerns over First Amendment rights and the lack of checks and balances on decisions made by big tech companies. Discussions over limiting or eliminating liability protections under Section 230 of the 1996 Communications Decency Act for tech companies that have engaged in censoring or political conduct have been heavily discussed in the past year.

The American Civil Liberties Union (ACLU) also expressed concern over Twitter’s decision to suspend Trump from social media, saying that it could set a precedent for big tech companies to silence voices.

“We understand the desire to permanently suspend him now, but it should concern everyone when companies like Facebook and Twitter wield the unchecked power to remove people from platforms that have become indispensable for the speech of billions— especially when political realities make those decisions easier,” the ACLU statement read.

Apple, Google, and Amazon have also garnered widespread scrutiny for banning the social media network Parler from their services. Parler, which has attracted a large following of classical liberal and conservative-leaning users, has filed a lawsuit against Amazon in an effort to reverse the company’s decision.

I agree,   great points by Gunter...   I read that even the president of Mexico condemned twitter for banning Trump.

But if I understand the rules correctly,   the opinions of foreign leaders only count when they go against Trump (or any pub president).

sort of Tim, they also allow any post that recommend the slaughter of  Americans

sort of Tim, they also allow any post that recommend the slaughter of  Americans

Not quite McFarm.  They have to be "right wing" Americans.

Suggesting consequences of any kind for anyone not deemed "right wing", including ilegal immigrants is "fomenting violence" at best, and more likely " racism" or "treason".  Of course we know, words like "Treason" and  now "Sedition" have joined words like "Racism" and "NAZI" , having lost all meaning. Now they are defined as any action, word or deed  the left doesn't like