metmike: This has got to be the dumbest thing the NAACP has done during its 122 year history....bringing race into the insurrection. Politics, hatred and a loss of its positive visions/ideas, along with crummy current day leaders has resulted in this once great organization stooping this low?

The NAACP and Rep. Bennie Thompson (D-Miss.) are suing former President Trump, alleging that Trump incited the Capitol riot on Jan. 6 in violation of a Reconstruction Era law commonly referred to as the Ku Klux Klan Act.

Filed Tuesday in the federal District Court of Washington, D.C., the civil complaint comes after the former president was acquitted over the weekend by the Senate in his second impeachment trial which was also focused on the events of Jan. 6.

“You cannot move forward if you don't address the illegality of what took place, the treasonous act,” NAACP President Derrick Johnson told The Hill. “If you try to move forward without holding people accountable, you only set yourself up [for] future activity that could possibly be successful in toppling our democracy. For African Americans, we see a long history of people not being held accountable ... and if we don't hold people accountable, there becomes this entitlement that it's OK to cause harm and violate the law.”

Johnson said that the insurrection of the Capitol was steeped in white supremacy, something that can’t be allowed to fester.

“We also must recognize that if we allow these groups to become mainstream they won't be extremists anymore, but part of our reality,” Johnson said. “That's not a reality that this country can survive.”

Thompson, in a statement, described Trump’s support of the rioters as “gleeful.”

Jason Miller, a spokesman for Trump, cited the former president's recent acquittal in the Senate impeachment trial and said Trump did not incite acts of violence.

“President Trump has been acquitted in the Democrats’ latest Impeachment Witch Hunt, and the facts are irrefutable. President Trump did not plan, produce or organize the Jan. 6th rally on the Ellipse," Miller said in a statement. "President Trump did not incite or conspire to incite any violence at the Capitol on Jan. 6th. Speaker Nancy Pelosi and Washington, D.C., Mayor Muriel Bowser must answer questions as to why they rejected additional security and National Guard assistance in the run-up to Jan. 6th.”

Miller also said that Giuliani, who has been Trump's personal lawyer, "is not currently representing President Trump in any legal matters.” It is not clear who will represent Trump in the matter at hand.

White extremist and hate group activity spiked during the Trump presidency, a concerning trend that the NAACP and other civil rights organizations have consistently warned against.

“Trump, of course, acts as a partial explanation,” the Southern Poverty Law Center said recently in its annual “Year in Hate and Extremism” report. “He undoubtedly emboldened the far right and, importantly, created heightened expectations.”

The Ku Klux Klan Act, passed in 1871, was the third law in a series of legislation created by Congress to slow the violence against and intimidation of Black Americans at the hands of the white hate group following the Civil War.

While much of the law has since become obsolete, several parts have become codified as a statute, including 42 U.S.C. 1985(1) — the provision listed in the lawsuit.

The statute specifically safeguards against conspiracies meant “to prevent, by force, intimidation, or threat, any person from accepting or holding any office.”

“We have a criminal justice system in this country,” McConnell said. “We have civil litigation. And former presidents are not immune from being accountable by either one.”

According to the NAACP, additional lawmakers, including Reps. Hank Johnson (D-Ga.) and Bonnie Watson Coleman (D-N.J.), are expected to join the lawsuit in the coming days.

The vision of the National Association for the Advancement of Colored People is to ensure a society in which all individuals have equal rights without discrimination based on race.

The National Association for the Advancement of Colored People (NAACP)[a] is a civil rights organization in the United States, formed in 1909 as an interracial endeavor to advance justice for African Americans by a group including W. E. B. Du Bois, Mary White Ovington, Moorfield Storey and Ida B. Wells.[3][4]

Its mission in the 21st century is "to ensure the political, educational, social, and economic equality of rights of all persons and to eliminate race-based discrimination". National NAACP initiatives include political lobbying, publicity efforts and litigation strategies developed by its legal team.[5] The group enlarged its mission in the late 20th century by considering issues such as police misconduct, the status of black foreign refugees and questions of economic development.[6] Its name, retained in accordance with tradition, uses the once common term colored people, referring to those with some African ancestry

BLM has been totally misleading and failing to help minorities in the areas that count most because they lack leadership and ignore the REAL reasons that minorities are not enjoying the same quality of life in Amerca that whites enjoy(jobs, crime, education NOT white cops) .

This act by the NAACP demonstrates a similar lack of clear thinking leadership that focuses on positive changes to help minorities.

This move is very divisive and will TURN OFF some/many people vs gaining universal support, while accomplishing nothing towards its stated mission.

I say this from the vantage point of being an outspoken advocate for civil rights my entire adult life....and being disappointed................having much higher expectations.

I wonder how many persons of color in our congress are pushing this very sentiment. I cannot at the moment think of one on the left who does not push this silliness.

Having the NAACP jump in over this would be like................after deflate gate and the issue of Tom Brady letting

a couple of lbs of air out of his footballs so they would be more comfortable for him......the commissioner of Major League Baseball, who hates Tom Brady(hypothetical),  jumped in and filed a lawsuit against Brady, claiming that his actions reflected poorly on all major league sports, including MLB.

Give us a break on the insurrection. All those CNN viewers with captured brains were fed stuff like this:

"Many Americans are still stunned by what happened at the Capitol. An outgoing President who many consider to be a White supremacist tried to incite lawmakers and citizens to overturn a legitimate election and block an incoming administration which includes the nation's first Black and South Asian vice-president."

metmike: They really want us to  believe that if Kamala Harris was white, there would have been no rioting?

"The January 6 assault on the US Capitol has added some new entries to that grim gallery. Many Americans are still reeling from seeing images of what's been called a "White riot" -- an assault on Congress by supporters of President Donald Trump, which left five people dead.

It's been describedas "the most dramatic challenge to the US democratic system since the civil war," but its impact on racial justice has been undersold.

Many have noted the racial dimensions to the insurrection, in which at least one Capitol rioter carried a Confederate flag. One commentator said that if the mob was Black, the Capitol's marbled "hallways would be red with their blood." House Speaker Nancy Pelosi said the mob chose their "whiteness over democracy."

metmike: So if mostly white people riot or break the law........even if it has nothing to do with race...........they are being racists. If  a person in the group has a Confederate flag..............the entire movement and the people there are basing it on racism.

"If the forces that drove rioters to ransack Congress gain permanent political power, the notion of citizens choosing their Whiteness over democracy won't seem so offensive.

But if America fulfills what Kennedy called "its promise," those images of White supremacists in the Capitol Rotunda will join the shameful gallery of photos that includes the 1963 Birmingham protests."

metmike: I guess they were not looking but I didn't notice any KKK signs, white sheets or anti minority/racist signs or statements.    These were people that were convinced by President Trump that the election was stolen. Interpreting it this way, to convince people it was a racist riot is extremely pathetic and very offensive for somebody that cares dearly about authentic civil rights.

MLK must be turning over in his grave.

The Capitol insurrection was never about the election. It was about white supremacy.

Insurrection Was A Product of Racism

Just listen/read the MSM to find out how many  tens of millions of white supremacists live in America.

Since Donald Trump is a racist, if your supported him, you must be a racist too. ....according to them.

When Donald Trump convinced tens of millions of people that the election was stolen from him, they were mostly white racists because that's who supports Donald Trump and its because they want to crush minorities, like he does and they don't really care about all his other accomplishments and agenda. It's all about racism.

When much of the MSM colludes with each other to report the same rubbish...........people believe it.

That's exactly the recipe for increasing division and hatred.

Characterizing and stereotyping these people, even the peaceful ones(vast majority) as evil  racists and including tens of millions of others that were not even  there but got tricked into believing the election was stolen, including some here is the recipe for creating an enemy to hate.

They are doing the polar, complete opposite of what MLK emphasized his entire life. 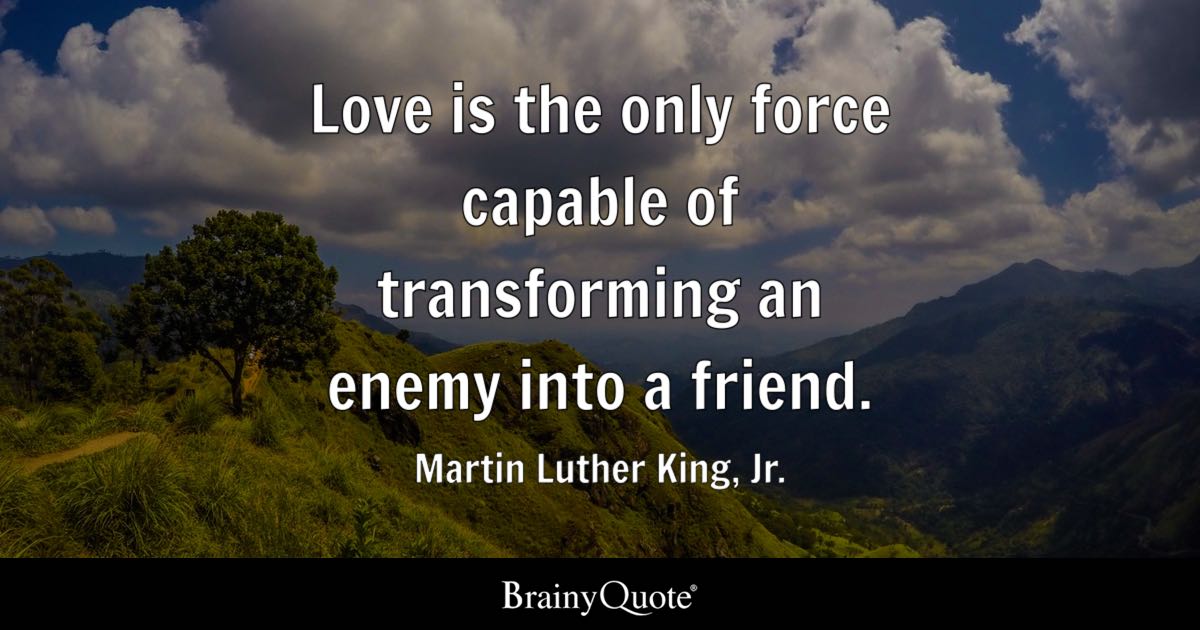 Don Lemon tonight, on CNN was no longer calling the insurgency by that name anymore.

According to him they are/were "the riots of white supremacy"

Seriously, that's what he calls it now.

Watched Biden earlier on CNN interviewed during a town hall.

Didn't see all of it but he sounded pretty good on some of it.

He insisted that America is not divided.  I have to wonder if he wants us to think that he thinks that or does he actually really think that? He just can't be that out of touch with reality.

The vast majority of people live in the real world and know how extremely divided the US is.

Biden thinks the nation is not divided: Biden said he takes issue with "everybody" stating that the US is a divided country. Biden explained that he believes most people in the country agree on issues like coronavirus aid. "The nation is not divided. You go out there and take a look and talk to people, you have fringes on both ends. But it's not nearly as divided as we make it out to be and we have to bring it together," Biden said.

metmike: He also insisted this  below over 3 weeks ago, 2 weeks AFTER COVID had already peaked(and here, 3 weeks later, the COVID numbers are down 60%).

Post election,  Biden says "Nothing will change the trajectory of covid over the next several months"

metmike: Honestly, I think that we are just living in a world that accepts the fact that politicians and news sources are going to make up their own interpretations and facts of news reports/items so it supports their agenda/belief system.

And we have many people that believe it because its what they want to believe.