Back to Index Reply to Topic Like This Topic
Humans are Throwing Earth’s Energy Budget off Balance
2 responses | 0 likes
Started by metmike - March 28, 2021, 4:26 p.m.

metmike: Nice case using realities that I agree with but EXAGGERATING the effect using their MODELS(that dial in speculation/estimation/assumptions from humans) that continue to be TOO WARM and have TOO MUCH radiative forcing from CO2 vs the actual measurements of it.

Profound: Smoking Guns!!  Proof with accurate 2 decade long measurement of the actual amount of radiative forcing caused by CO2 of 1 irrefutable reason for WHY global climate models continue to be too warm. Climate emergency is really about social justice and brainwashing people. Even MORE confirmation that climate models overstate atmospheric warming. Models clearly too warm yet incredibly programmed to get even HOTTER!  Now, even more confirmation why the models are too warm. August 2020 https://www.marketforum.com/forum/topic/57636/

"The  IPCC  Fifth  Assessment Report predicted 0.508±0.102 Wm−2RF resulting  from  this  CO2 increase,  42%  more  forcing than actually observed. The lack of quantitative long-term global OLR studies may be permitting inaccu-racies to persist in general circulation model forecasts  of the effects of rising CO2  or other greenhouse gasses."

Rechargeable batteries used to contain Cadmium, it was discontinued because Cadmium is horribly toxic. less than half a gram of Cadmium in your system will really mess up your day. Symptoms include  cancer, “Cadmium Blues” (persistent flu like symptoms), renal failure, softening of the bones, emphysema and respiratory damage. Can you imagine having several pounds of Cadmium on your roof? What if your neighbour’s solar powered rooftop catches fire?

Tellurium is unpleasant, though it does not seem as toxic as Cadmium. At least people seem to recover from Tellurium poisoning. Clinical features of acute tellurium toxicity include a metallic taste, nausea, vomiting, blackened oral mucosa and skin, and corrosive gastrointestinal tract injury from acidic solvents. … Our patients exhibited many of the characteristic features of tellurium toxicity, namely, vomiting, garlic odor of the breath, blackened oral mucosa, and benign clinical course. – source https://pediatrics.aappublications.org/content/116/2/e319

Cadmium Telluride solar cells – double the fun, if a house fire spreads the panel material around your neighbourhood. I’m not eating pie made from that Apple tree.

The Perovskite solar cells are if anything are potentially even worse. From Wikipedia :- A perovskite solar cell (PSC) is a type of solar cell which includes a perovskite-structured compound, most commonly a hybrid organic-inorganic lead or tin halide-based material, as the light-harvesting active layer. Perovskite materials, such as methylammonium lead halides and all-inorganic caesium lead halide, are cheap to produce and simple to manufacture.

Organic lead is probably the worst form of lead exposure, because it is fat soluble. Organic lead is neatly packaged for optimum absorption into your body and brain tissue. You don’t even have to ingest or breath it in – organic lead can pass right through your skin, all it has to do is touch you.

The S-band SAR, one of two kinds of radar on the NISAR mission, arrived at JPL on March 19. The next day, technicians and engineers moved the S-SAR into the airlock to the Spacecraft Assembly Facility’s High Bay 1 clean room. The equipment will be unpacked over several days in the clean room.Credits: NASA/JPL-Caltech

An SUV-size Earth satellite that will be equipped with the largest reflector antenna ever launched by NASA is taking shape in the clean room at the agency’s Jet Propulsion Laboratory in Southern California. Called NISAR, the joint mission between NASA and the Indian Space Research Organization (ISRO) has big goals: By tracking subtle changes in Earth’s surface, it will spot warning signs of imminent volcanic eruptions, help to monitor groundwater supplies, track the melt rate of ice sheets tied to sea level rise, and observe shifts in the distribution of vegetation around the world. Monitoring these kinds of changes in the planet’s surface over nearly the entire globe hasn’t been done before with the high resolution in space and time that NISAR will deliver.

NISAR will detect movements of the planet’s surface as small as 0.4 inches (a centimeter) over areas about the size of half a tennis court. Launching no earlier than 2022, the satellite will scan the entire globe every 12 days over the course of its three-year primary mission, imaging the Earth’s land, ice sheets, and sea ice on every orbit.

Activities such as drawing drinking water from an underground aquifer can leave signs on the surface: Take out too much water, and the ground begins to sink. The movement of magma under the surface before a volcanic eruption can cause the ground to move as well. NISAR will provide high-resolution time-lapse radar imagery of such shifts.

Ignorance run in your veins doesn’t it, rogered,

that’s from all the intravenous Klimate Kool-aide you have been using. 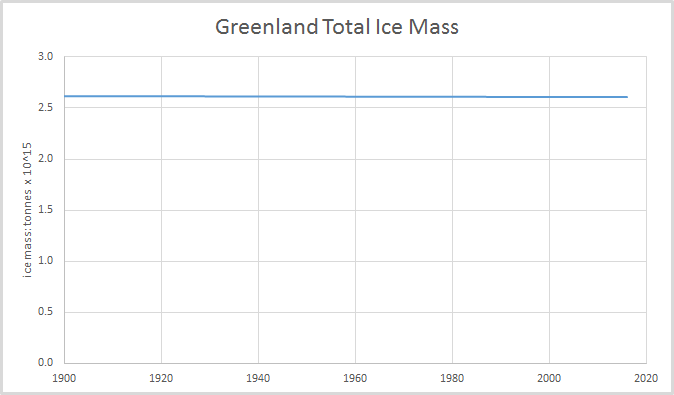 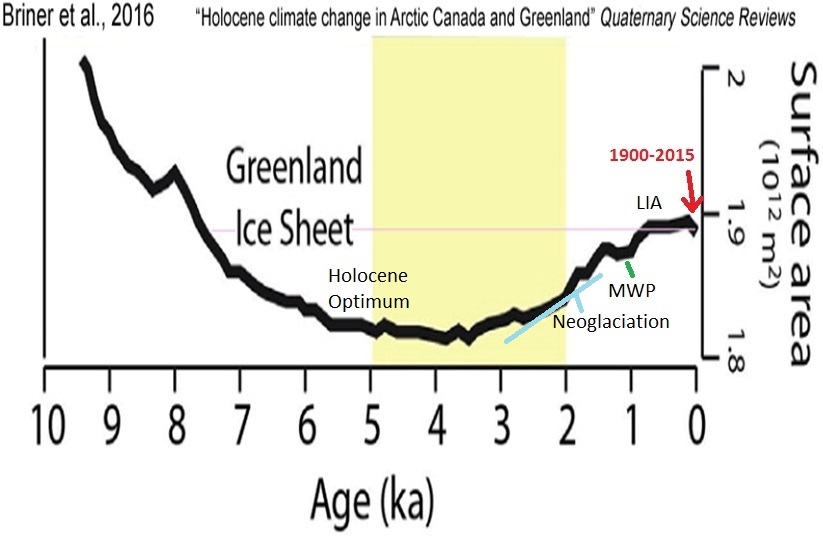 metmike: I am not agreeing entirely with this one study but we know with high confidence that it was warmer in Greenland during the Holocene Climate Optimum(seen below), between 9,000-5,000 years ago and there was less Arctic sea ice then. My point is that the science is clearly NOT settled and the only information we get is exaggerated, computer simulated/modeled stuff from biased humans that has been proven beyond a shadow of a doubt to be TOO warm.............but they refuse to adjust it because its just too powerful of a tool for politics.

The Holocene Climate Optimum warm event consisted of increases of up to 4 °C near the North Pole (in one study, winter warming of 3 to 9 °C and summer of 2 to 6 °C in northern central Siberia).

Out of 140 sites across the western Arctic, there is clear evidence for conditions warmer than now at 120 sites. At 16 sites, where quantitative estimates have been obtained, local HTM temperatures were on average 1.6±0.8 °C higher than now.

Temperature variations during the Holocene from a collection of different reconstructions and their average. The most recent period is on the right, but the recent warming is only seen in the inset.