Here's a new NG thread. We're entering a tricky time of year as normal CDDs are rapidly catching up to and pretty soon will exceed normal HDDs.

The 12Z Euro ens was an interesting illustration. It had a large increase in HDDs (~14), but this large colder change also resulted in a ~7 CDD drop. So, the net was still ~+7 total DDs and that appeared to bring NG back up 2 cents from daytime lows hit near the start of the 12Z Euro ens (from 2.936 to 2.956). So, even as late as we are now, HDDs can still at least support NG or even allow it to bounce like it just did.

No ‘Excitement’ Needed as May Nymex Natural Gas Contract Expires Above $2.90

Part of a broad move higher across commodities, natural gas futures recorded a third straight day of gains despite an uptick in production and moderate weather outlooks. The May Nymex gas futures contract rolled off the board at $2.925, up 5.2 cents from Tuesday’s close. June, which takes over the prompt-month position on Thursday, climbed…

After rallying throughout the week, natural gas futures eased lower in early trading Thursday as traders awaited updated government inventory data, expected to show a lean increase in Lower 48 gas stocks. The June Nymex contract was down 2.4 cents to $2.936/MMBtu at around 8:45 a.m. ET. Predictions point to a leaner-than-average injection in the…

The rig count. Up from the lowest of the last 10 years of 68 in July 2020 because of COVID last year but still well below the previous loftier levels. Was flat at 94 rigs reported last week. Wonder how Joe L is doing.

Strong upward seasons going for a bit longer but waning up here. 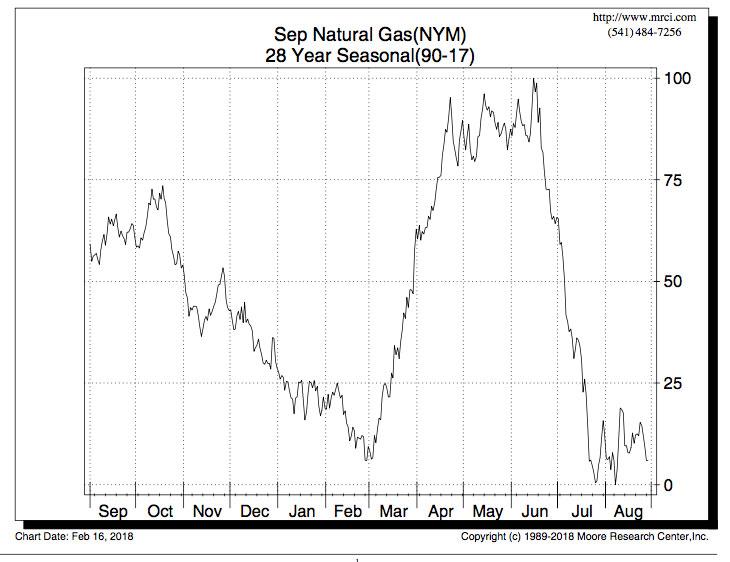 Here's the very chilly temperatures from last week that caused an unusual amount of HDD's for this late in the year. This is the 7 day period for Thursdays EIA report.

This was the previous week of temps and the EIA report that resulted:

Working gas in storage was 1,898 Bcf as of Friday, April 23, 2021, according to EIA estimates. This represents  a net increase of 15 Bcf from the previous week. Stocks were 302 Bcf less than last year at this time and 40 Bcf below the five-year average of 1,938 Bcf. At 1,898 Bcf, total working gas is  within the five-year historical range.

The latest storage figure from the U.S. Energy Information Administration (EIA) came in on the high side of expectations Thursday, with the agency reporting a 15 Bcf injection into storage inventories for the week ending April 23. After three straight days in the green, natural gas futures retreated early in Thursday’s session and fell further…

Will this heating season ever end? Both the Euro suite and GFS ens had HDD gains again vs 0Z that were significantly larger than the corresponding very small CDD losses. It is hard to know for sure, but it sure looked like NG was getting very solid support in the 2.880s to 2.890s for several hours starting from late morning followed by what appeared to be good short covering/buying just before and during pit close during the colder Euro op run.

Mike, any opinion about this?

Little accident during a rig move  eliminated my posting for a bit. Everything all right now.

To be honest, I was not following ng last night because the weather in late April is rarely a factor, outside of extremes.

I'll comment more later but do see the increase in HDD's that you mentioned in recent runs.

I doubt that was a factor overnight, since the lows for this session were around 6:20 am Central just above 2.890, which as you noted earlier in the morning is very strong support.

From that low, we spiked up to the high of 2.962, just over 2 hours later and are right around mid range here before noon.

I don't have a strong feeling for where prices might go today.

The HDD and CDD are just too close. I know that you mentioned the HDD going up and CDD not going down which is an interesting, bullish dynamic right now.

Here are Joe's recent reports, going back a year for a comparison. Wow, look at where we were 1 year ago today compared to his most recent report! 31 rigs running then and Joe had 4!

Just to clarify since I made that post late last night, I was comparing yesterday’s 12Z to yesterday’s 0Z. I should have said that then.

It took one day, but it appeared to have finally dawned on natural gas futures traders that the latest storage data was bullish after all. Though gains were small on Friday, the June Nymex gas futures contract recovered 2.0 cents day/day to settle at $2.931. The July contract ticked up 1.7 cents to hit $2.978.…

Thanks for the clarification Larry!

With seasonal CDD's getting ready to pass up HDD's and both being seasonally low, only some sort of extreme weather anomaly at this time of year would make it even possible for weather to be clearly the main factor driving the market.

It can be the main factor with above average DD's added up, if the market decides to trade on that........... but never clearly at this time of year in the absence of it being an extreme anomaly.

As a weather trader, I sure would not use it for the main reason to be in natural gas.

Unless, again it was something extreme.

There can be other NON weather reasons along with that of course to have a position in ng at this time of year.

Natural gas futures hovered close to even in early trading Monday, with prices pausing after recent gains even as analysts pointed to further upside moving into the summer. The June Nymex contract was down 1.7 cents to $2.914/MMBtu at around 8:45 a.m. ET. Weather-driven demand expectations trended slightly higher over the weekend, with the forecast…

Continuing to ride higher as summer nears, natural gas futures approached the technically and psychologically significant $3/MMBtu mark in early trading Tuesday. The June Nymex contract was up 2.2 cents to $2.988 at around 8:45 a.m. ET. Overnight colder changes to the forecast increased demand expectations for this weekend into next week, according to NatGasWeather.

June natural gas futures on Tuesday barely extended a win streak to three days as traders took profits and volume proved light while the prompt month tested technical resistance at the $3.00 level. Futures advanced over the course of April and early this month as supply/demand balances tightened. On Tuesday, the June Nymex contract eked…

Coming off a range-bound trading session, and with the latest weather outlook offering little to excite bulls, natural gas futures hovered close to even early Wednesday. The June Nymex contract was off 1.3 cents to $2.954/MMBtu at around 8:45 a.m. ET. Based on the latest forecast data Bespoke Weather Services made a “marginal increase” to…

Working gas in storage was 1,958 Bcf as of Friday, April 30, 2021, according to EIA estimates. This represents  a net increase of 60 Bcf from the previous week. Stocks were 345 Bcf less than last year at this time and 61 Bcf below the five-year average of 2,019 Bcf. At 1,958 Bcf, total working gas is  within the five-year historical range.

Temperatures from the 7 period ending last Friday for this weeks EIA report:

metmike: CDD's, seasonally, will be passing up HDD's in several days. This is not the time of year when temperatures usually have a strong impact in determining prices

As updated forecasts hinted at higher cooling demand developing later in May, natural gas futures recovered the previous session’s losses in early trading Friday. After slipping 1.0 cents in Thursday’s trading, the June Nymex contract was up 1.3 cents to $2.941/MMBtu at around 8:45 a.m. ET. Based on the latest forecast data projections from Bespoke