I know,  there is certainly some dissent on the left, noteably from AOC,  but overall support from the left is pretty strong for Kamala and her strong stand.

But less than a year ago, these same people called such talk "Xenophobic and racist".

They certainly are an adaptable group, aren't they?

The Memo: Harris, Ocasio-Cortez and the Democratic divide on immigration

Two of the biggest names in the Democratic Party have split over one of the most vexing issues facing President Biden.

Vice President Harris, on her first international trip since taking office, issued a stark warning to would-be migrants from Guatemala on Monday. “Do not come, do not come,” she said at a news conference.

Rep. Alexandria Ocasio-Cortez (D-N.Y.) swiftly branded Harris’s comments “disappointing” and pointed out that seeking asylum at the U.S. border is “a 100% legal method of arrival.”

The congresswoman from New York went on to link migration to past and present U.S. policies in Latin America. In effect, she told Harris and the Biden administration that they needed to show more empathy.

“We can’t help set someone’s house on fire and then blame them for fleeing,” Ocasio-Cortez tweeted.

The public disagreement is given an added twist because Harris is universally assumed to harbor future presidential ambitions, and a White House quest by Ocasio-Cortez, the left’s most charismatic star, is also plausible. But, more substantively, the dispute has spotlighted yet another fundamental tension between centrist and progressive Democrats.

To those in the center, there is an urgent need, above all, to quell the flow of migrants to the southern border.

Harris, asked by reporters about Ocasio-Cortez’s comments, emphasized that she, too, is concerned with “root causes.” But politically speaking, she seems to acknowledge that it will be very difficult to sustain a focus on those root causes unless the migrant numbers are reduced.

The latest figures from U.S. Customs and Border Protection show “encounters” between agents and people seeking to cross the southwestern border rising above 170,000 in both March and April this year.

Those are the largest numbers in a couple of decades. Conservative media outlets have turned “Biden’s border crisis” into a slogan with which to berate the new administration.

Yet, progressives like Ocasio-Cortez look at the situation through a wholly different lens.

Their argument is that the United States cannot absolve itself of moral responsibility for northward migration, given the American policies that have exacerbated Latin America’s problems in the first place. This history, the left suggests, encompasses not just the bloody history of U.S. involvement in coups and civil wars in Central America, but also American economic policy and even the failure to mount a more effective strategy to counter climate change.

I decided to put my comment on another page since the last one was so long.

I know the right will read the last paragraph of the previous story and it might as well be in Russian and everybody knows my position on climate change. However, as human beings from a very wealthy country that have the power to help in some way(not necessarily because we caused it) I think that we actually do have some moral responsibility to help........especially considering it also helps the United States..........a potential win-win dynamic if done effective.

I recognize that much of the well entrenched problems in Central America related to crime don't have easy fixes and maybe will never be fixed..... for pete's sake, we can't even fix a violent crime crisis thats worsening here in the US in our big cities.

But that still doesn't mean we should not help. It means that we should ALSO work MUCH harder to fix out own problems in addition to trying to help others.

With regards to climate change, you know my position............we are absolutely having a climate optimum for life on the greening planet by all authentic standards...........but in this one instance, an objective climate skeptic can see a case to be made.

2 late season hurricanes ETA and Iota clobbered Central America. While historical records don't show a compelling trend for hurricane energy in recent decades, slightly warmer waters would be slightly more favorable for late season hurricanes to intensify and also be slightly wetter because the atmosphere can hold around 6% more water vapor.............though most of the global warming has occurred in the coldest places, during the coldest times of year(and night) and is clearly beneficial to the planet.

This is how a topic morphs on MarketForum(-: and I do it more than anybody. My apologies but the path its taking is very relevant and starting new topics all the time is counterproductive to the life of individual threads.

They stay up near the top longer when they include different related elements.

Is there a slight upward trend in the graph below?  One thing to keep in mind is that 100 years ago, many of the tropical systems contributing to the ACE could not be tracked. Only when they we close to land do we know much about them.

Regardless, a warmer ocean is capable of intensifying hurricanes faster and for them to develop later and earlier in the season.

Here's another relevant view. If we go by this graph, then no, the US is not responsible for 1 iota's worth of hurricane damage to Central America.........including Iota. 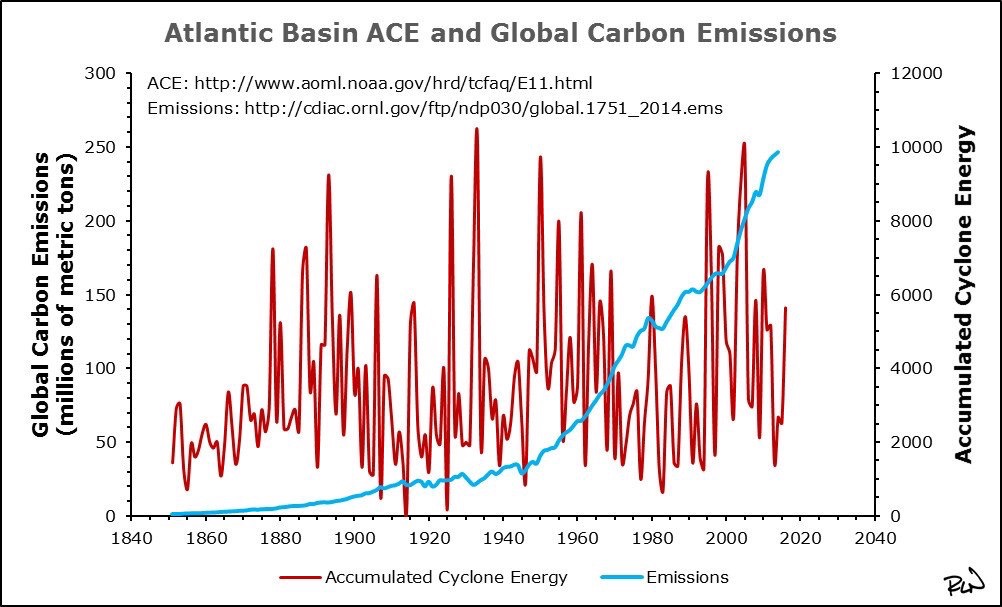 Yep, "guilty" as charged. I still don't like that Fauci was brought up in that other thread and still say that mentioning that Trump didn't care about violating the Const on 1/6/21 was countering a point you were making about the Dems not caring about the Const., but we'll never agree and Mike doesn't want this to be discussed any more. So, that's my final say unless it is brought up again.

But I do agree with Tim's point about many of the Dems other than AOC and some other far lefties changing their tune. Also, why didn't Harris or anyone else mention the two hurricanes as specific factors?

I am puzzled that they have not mentioned the hurricanes 1 time.

I think that sometimes people making these decisions and having these ideologies have such tunnel vision that means they don't always look objectively at the facts, that they miss realities right in front of them.

In this case, however where every bad weather event that happens, even cold and snow get blamed on man made global warming(the climate crisis from humans using fossil fuels) its especially puzzling because a legit case could actually be made and its actually a case that Biden and company are making using tons of junk science and fraud.

Maybe the influx of people is coming from non hurricane victims? I don't know that but like you, can't understand it.

Or maybe they don't want to tie it into  policies  that only accept a big increase in immigration for verifiable  natural disaster victims, like with Mitch, then, in all the other years(most of them) with no natural disasters the immigration laws they wrote disallow people entrance for other non natural disaster reasons........just wild speculating.

update: Here's another potential idea that I think makes the most sense after giving it more thought.

Biden and Harris, you would think would be wanting to blame the massive influx of immigrants at the border and would have the perfect excuse and a dang good one, by telling us about Eta and Iota.

But they have been in constant denial of this crisis and the actual numbers. If they told us about the impacts of Eta and Iota, then they would have to come clean about the border crisis.

You can't have a humanitarian crisis at the southern border from 2 hurricanes..............if you are telling people that there is no crisis and that the numbers are no worse than before.

AHA! That one makes total sense!!!

They already took the position of no crisis, its not really that bad early this year. To change that now, incorporating the REAL affects of the hurricanes into their narrative would be admitting they lied earlier.

This is also why Harris has refused to visit the southern border. Then, after actually seeing it, the media would be asking her tough questions and holding her accountable for the crisis that her and Biden pretend does not exist.

It's pretty sad when our politicians can't even tell us the truth about things that support their cause because it contracts the lies/false narratives that they decided on earlier.