"As I said in the above quoted article, they haven’t coded any of the following into their models as possible causes (mostly because they can’t but partly because they won’t): ENSO (El Nino Southern Oscillation), ocean oscillations, ocean currents, volcanoes, wind, water cycle, sun, GCRs (Galactic Cosmic Rays), Milankovitch cycles, water vapour, clouds. Yes, they have coded some of these into the models to some extent, but not as primary causes of anything, only as constants or almost-constants, eg. the sun, or as features that react to CO2-induced changes, eg. water vapour and clouds (the IPCC calls them feedbacks).

The causes of the extreme winter weather in the USA remain unknown, apart from the obvious reason: the Polar Vortex. The reasons put forward in the above Nature paper are all based on circular logic, because they come only from the climate models when tuned to give the observed result. ie, the result is an input, which is by definition circular logic.

The situation is that the climate modellers do not know what caused the extreme winter weather in the USA, and they won’t get any nearer to knowing while they remain chained to their models."

During global warming, there have actually been LESS extreme cold intrusions not more. That makes sense.

The thing that is causing LESS extreme cold intrusions, can’t be causing more of them.
The dynamics and meteorology may have changed and one can make a case for Arctic amplification principles in some situations but if they are more than offset by the opposite happening……….you just can’t have more of something because of the thing that is causing less of it.

Another thing. With absolute certainty, the coldest places at the coldest times of year are warming the most. That by itself tells you that the potential pool of extreme cold for outbreaks is going to be LESS under a global warming regime.

When they are able to pinpoint the causes for all the extreme cold outbreaks BEFORE global warming and rule those out AFTER global warming…………then we have something legit. They can’t do that and this gets to the crux of the fatal modeling flaws.

They only dial into the models what they know(think they know) and its completely lacking in all the reasons for previous extreme cold outbreaks.

Otherwise, it’s much more likely to be from the same forces that have always caused extreme cold outbreaks in the mid latitudes…..those laws of physics/meteorology were not suddenly abolished.

It is very simple.
To get such changes in jet stream tracks one needs to alter the average gradient of tropopause height between equator and poles.
The models contain no such phenomenon.
Nor is there any way that CO2 could cause such an effect.
Increased meridionality in jet stream tracks is historically linked to cooling periods due to increased cloudiness from longer lines of air mass mixing.
When we were warming the jets were more zonal and global cloudiness declined.
The switch to increased meridionality occurred around the year 2000 which is why ‘the pause’ happened.
That coincides with reduced solar activity and the same happened in the LIA and briefly during the mid 20th century cooler period.
If it continues then cooling will begin once more.

Stephen,
You’ve been insisting on this principle for over a decade(that I remember reading you).

It actually makes a great deal of sense meteorologically and observations seem to back it up.

The well documented 'pause' for the global warming trend over the last 15+ years has generated over 50 hypothetical science explanations...the latest cloud coverage analysis appears to be a better explanation..... 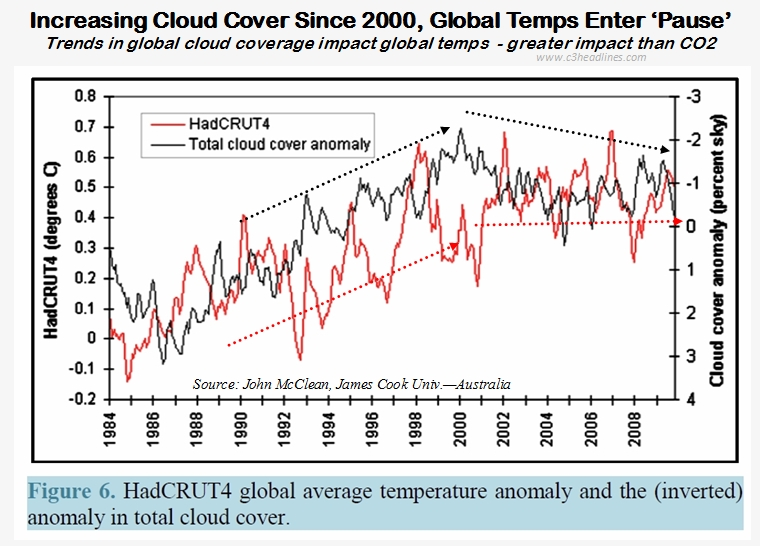