Late Monday update: The storm is hitting right now! See Auroral update at the bottom of this page......left side of page.

Our lights were flickering around an hour ago and I'll bet it was from the CME hitting!!!

CME IMPACT: As predicted, a CME hit Earth's magnetic field on Oct. 12th at approximately 02:30 UT. This impact has the potential to spark G2-class geomagnetic storms in the hours ahead. G2-class storms are moderately strong, and can produce naked-eye auroras   in northern-tier US states such as Minnesota, the Dakotas and Washington.

metmike: This is not a major storm or anything to worry about. Our sunspot cycle 24 bottomed at the end of 2019 and sunspot cycle 25 will be ramping up between now and the 2025 peak(give or take a few months).

Solar flares will increase during that time frame.

A CME expected to hit Earth on Oct. 11th is   running late. As a result, NOAA forecasters have shifted their   prediction of a possible G2-class geomagnetic storm from Oct. 11th to Oct. 12th.   G2-class storms are moderately strong, and can produce naked-eye auroras   in northern-tier US states.

The debris will not hit Earth. Shortly after the blast, SOHO coronagraphs detected a CME emerging from the blast site, but it was narrow and moving outside the Earth strike zone. Modeling by NOAA analysts has ruled out even a glancing blow. 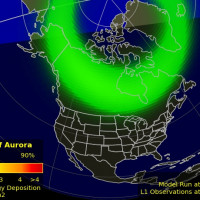 Cosmic Rays Solar Cycle 25 is beginning, and this is reflected in the number of cosmic rays entering Earth's atmosphere. Neutron counts from the University of Oulu's Sodankyla Geophysical Observatory show that cosmic rays reaching Earth are slowly declining--a result of the yin-yang relationship between the solar cycle and cosmic rays. 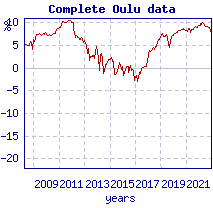 Oct. 3, 2019: Solar Minimum is underway, and it’s a deep one. Sunspot counts suggest it is one of the deepest minima of the past century. The sun’s magnetic field has become weak, allowing extra cosmic rays into the solar system. Neutron monitors at the Sodankyla Geophysical Observatory in Oulu, Finland, show that cosmic rays are percentage points away from a Space Age record:

There Are At Least 36 Intelligent Alien Civilizations In Our Galaxy, Say Scientists

It’s the oldest and the greatest cosmic question of all: is there anybody out there?

For years all we’ve had is the Drake Equation to help us understand the question, but no indication of an answer. Now a group of scientists at the University of Nottingham think they’ve come up with a new “cosmic evolution”-based calculation—or, rather, an estimation—that suggests that there are likely to be at least 36 ongoing intelligent civilizations in our Milky Way galaxy.

The Milky Way, home to our Solar System, is estimated to have 100 billion to 400 billion stars, and roughly one exoplanet per star in our galaxy.

Published today in The Astrophysical Journal, the new paper examines the likely number of Communicating Extra-Terrestrial Intelligent (CETI) civilizations in the Milky Way. It assumes that intelligent life comes to occur on other planets much as it has done on our own planet.

It actually makes a lot of assumptions. Indeed, way too many assumptions for some that doubt its generous conclusions.

A key assumption is that it takes around five billion years for intelligent life to form on other planets, as it does on Earth, but that life is probable. That’s a big assumption, for sure. Another is that a technological civilization will last at least 100 years—as ours has, thus far. After all, it took 4.5 billion years of evolution before a technological civilization arose on Earth, and was capable of communicating.

The number of civilizations depends strongly on how long they are actively sending out signals of their existence into space—such as radio transmissions from satellites and TV.

The calculation—which says that there could be 36 active communicating intelligent civilizations in our home galaxy on 4.5-billion years old (or more) Earth-like planets around Sun-like stars—is called the “Astrobiological Copernican Limit” by the researchers. It takes into account:

“The classic method for estimating the number of intelligent civilizations relies on making guesses of values relating to life, but opinions about such matters vary quite substantially,” said Tom Westby, Assistant Professor, Faculty of Engineering at the University of Nottingham, and lead author on the paper. “Our new study simplifies these assumptions using new data, giving us a solid estimate of the number of civilizations in our galaxy.”

There’s also the thorny question of how long intelligent civilizations tend to survive.

“Searches for extraterrestrial intelligent civilizations not only reveals the existence of how life itself forms, but also gives us clues about how long our own civilization will last,” said Christopher Conselice, Professor of Astrophysics at the University of Nottingham, who led the research. “If we find that intelligent life is common then this would reveal that our civilization could exist for much longer than a few hundred years.”

“Alternatively, if we find that there are no active civilizations in our galaxy it is a bad sign for our own long-term existence.”

metmike: It's always fun to speculate on things that you CAN NEVER BE PROVEN WRONG ABOUT!

There could be 100 times more intelligent life out there than they speculate ..........or there could be NONE. We might be it. Unless somebody discovers a way to break the known laws of physics (which isn't happening), we will NEVER know.

The speed of light in vacuum, commonly denoted c, is a universal physical constant important in many areas of physics. Its exact value is defined as 299792458 metres per second (approximately 300000 km/s, or 186000 mi/s).[Note 3] It is exact because, by international agreement, a metre is defined as the length of the path travelled by light in vacuum during a time interval of 1⁄299792458 second.[Note 4][3] According to special relativity, c is the upper limit for the speed at which conventional matter, energy or any signal carrying information can travel through space.

Though this speed is most commonly associated with light, it is also the speed at which all massless particles and field perturbations travel in vacuum, including electromagnetic radiation (of which light is a small range in the frequency spectrum) and gravitational waves. Such particles and waves travel at c regardless of the motion of the source or the inertial reference frame of the observer. Particles with nonzero rest mass can approach c, but can never actually reach it, regardless of the frame of reference in which their speed is measured. In the special and general theories of relativity, c interrelates space and time, and also appears in the famous equation of mass–energy equivalence, E = mc2.[4] In some cases objects or waves may appear to travel faster than light (e.g. phase velocities of waves, the appearance of certain high-speed astronomical objects, and particular quantum effects). The expansion of the universe is understood to exceed the speed of light beyond a certain boundary.

More generally, it is impossible for signals or energy to travel faster than c. One argument for this follows from the counter-intuitive implication of special relativity known as the relativity of simultaneity. If the spatial distance between two events A and B is greater than the time interval between them multiplied by c then there are frames of reference in which A precedes B, others in which B precedes A, and others in which they are simultaneous. As a result, if something were travelling faster than c relative to an inertial frame of reference, it would be travelling backwards in time relative to another frame, and causality would be violated.[Note 9][39] In such a frame of reference, an "effect" could be observed before its "cause". Such a violation of causality has never been recorded,[18] and would lead to paradoxes such as the tachyonic antitelephone.[4

A tachyonic antitelephone is a hypothetical device in theoretical physics that could be used to send signals into one's own past. Albert Einstein in 1907[1][2]presented a thought experiment of how faster-than-light signals can lead to a paradox of causality, which was described by Einstein and Arnold Sommerfeld in 1910 as a means "to telegraph into the past".[3] The same thought experiment was described by Richard Chace Tolman in 1917;[4] thus, it is also  known as Tolman's paradox.

A device capable of "telegraphing into the past" was later also called a "tachyonic antitelephone" by Gregory Benford et al. According to the current understanding of physics, no such faster-than-light transfer of information is actually possible.  For instance, the hypothetical tachyon particles which give the device its name do not exist even theoretically in the standard model of particle physics, due to tachyon condensation, and there is no experimental evidence that suggests that they might exist. The problem of detecting tachyons via causal contradictions was treated but without scientific verification

metmike: Donald Trump had a better chance of using the tachyonic antitelephone principle to send a message back prior to the 2020 election to overturn the results than he did using the methods he attempted to use (-:

GEOMAGNETIC STORM UPDATE: Earth's magnetic field is reverberating from the impact of a CME during the early hours of Oct. 12th (0230 UT). The blow triggered a G2-class geomagnetic storm--actually, a double storm--which is only now subsiding more than 12 hours later. Arctic sky watchers should remain alert for auroras as Earth exits the CME's magnetized wake. Aurora alerts: SMS Text.

AURORAS IN THE USA: It's been a while. Last night, auroras were sighted in more than a dozen US states after a CME struck Earth's magnetic field. "The G2 geomagnetic storm produced the first visible auroras from   coastal Massachusetts since 2017," reports Chris Cook, who snapped this 30-second self   portrait around 1am EDT: 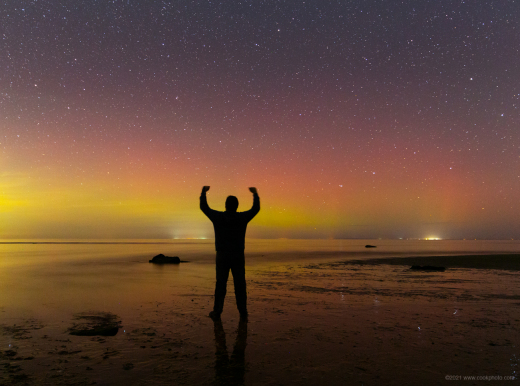 The red-topped auroras Cook witnessed are relatively rare; they appear during geomagnetic storms that spread far from the poles. Red is caused by oxygen atoms meeting the solar wind as high as 500 km above Earth's surface.

In some states the auroras were so bright onlookers photographed them using nothing more than their cell phones. iPhone or Android? You decide:

The iPhone photo on the left comes from Tyler Knight of Mound, Minnesota, while the Samsung Galaxy image on the right was taken by meteorologist James Sinko on Castle Hill, Maine. Across the border in Saskatoon, Canada, Frank Lang recorded a must-see video using his iPhone 12.

At the apex of the storm, auroras descended as far south as Nebraska. Caryl Bohn photographed their faint red glow from the town of West Oak.

Subscribers to our Space Weather Alert system were notified the instant the CME hit. The alert was triggered by a sudden uptick in solar wind speed signalling the arrival of a shock front:

The plot shows data from NOAA's DSCOVR spacecraft. When the CME passed by, the solar wind quickened by 120 km/s. At the same time, the plasma density tripled, and the temperature increased almost 10-fold. These are classic signs of a direct hit by a CME.

metmike: Northern lights have retreated back into Canada/Alaska tonight.