Back to Index Reply to Topic Like This Topic
In another show of profound cluelessness, Biden authorizes taping the Strategic Oil reserve
19 responses | 0 likes
Started by TimNew - Nov. 23, 2021, 10:32 a.m.

Everytime I think I've heard the absolute depth of vapidness, the bar getslowered.

"Let's cut US supply by closing pipelines and canceling leases and regulating some forms of produciton out of existence".

"Why are these gas prices so high. Must be something illegal going on".

"I know, Lets hit the SPR for 50 million barrels. At least some of my supporters will buy that as a good idea".

This is really starting to make my head hurt.

Re: In another show of profound cluelessness, Biden authorizes taping the Strategic Oil reserve
0 likes
By mcfarm - Nov. 23, 2021, 10:54 a.m.
Like Reply

Re: Re: In another show of profound cluelessness, Biden authorizes taping the Strategic Oil reserve
0 likes
By metmike - Nov. 23, 2021, 11:05 a.m.
Like Reply

Just BS, PR rhetoric to offset all the reports that accurately put some of the blame for rising prices squarely on Biden.

They are attempting to do what works most effectively in politics today.......manufacture a convincing sounding narrative and repeat it over and over and over and after awhile people start believing it.

Biden's ratings are plunging, partly because of the worst energy policies in history by an extremely wide margin.

Reaction by the Biden Team?

Don't fix the problem with the energy policies (which are a train that already left the station) but instead, manufacture the illusion that Biden is fighting for lower energy prices for consumers by taking aggressive actions to lower prices.

Blame the evil and greedy oil and gas companies for price gouging and record profits(even as he tries to obliterate them with policies that greatly discourage them from increasing production and bringing NEW SUPPLIES to the market which is the only way we will ever see lower prices.........other than short term, ignorant publicity stunt blips like this or if there is a recession)

Ohhh, a recession will fix all kinds of problems.  Oil wil get cheaper,  so will food and just about everything else.  And supplies will increase as people buy far less,  so the supply chain issues go away.

Yes, a recession is just what we need.

strategic oil reserve question. So when asked a very simple question recently, Do you plan on releasing oil form our reserves? Biden answered this way. We are looking at that option. Seems to be a pattern here or a new version of the truth...or.... the Way Biden tells the truth or not. News today since August we have released 15.5 mmb of oil.

I see that the oil market is completely ignoring Biden's move (of course it would) and going in the opposite direction today.

Previous discussion on this:

Also very related to this because of the politics to obliterate fossil fuels:

Re: In another show of profound cluelessness, Biden authorizes taping the Strategic Oil reserve
0 likes
By bear - Nov. 24, 2021, 10:22 a.m.
Like Reply

he is tapping this reserve for purely Partisan reasons.   he should be ashamed of this.

Gasoline prices are up over 10c this week. This is a joke of a move.

Again, here is why.

Crude supplies have dropped around 100,000 barrels in the last year. Adding 30,000 this year from the oil reserve will only slow the rate of decline and is like putting your finger in a leaking dam to slow the loss of water, instead of fixing the dam. 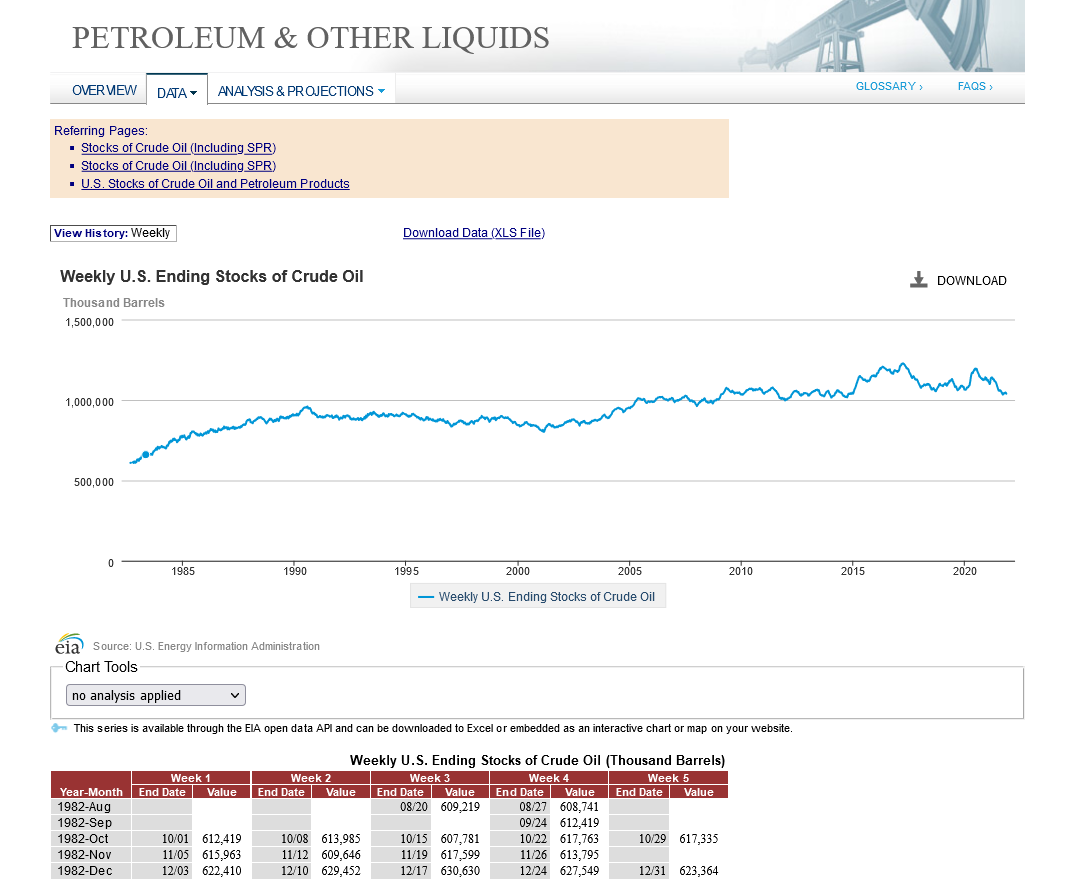 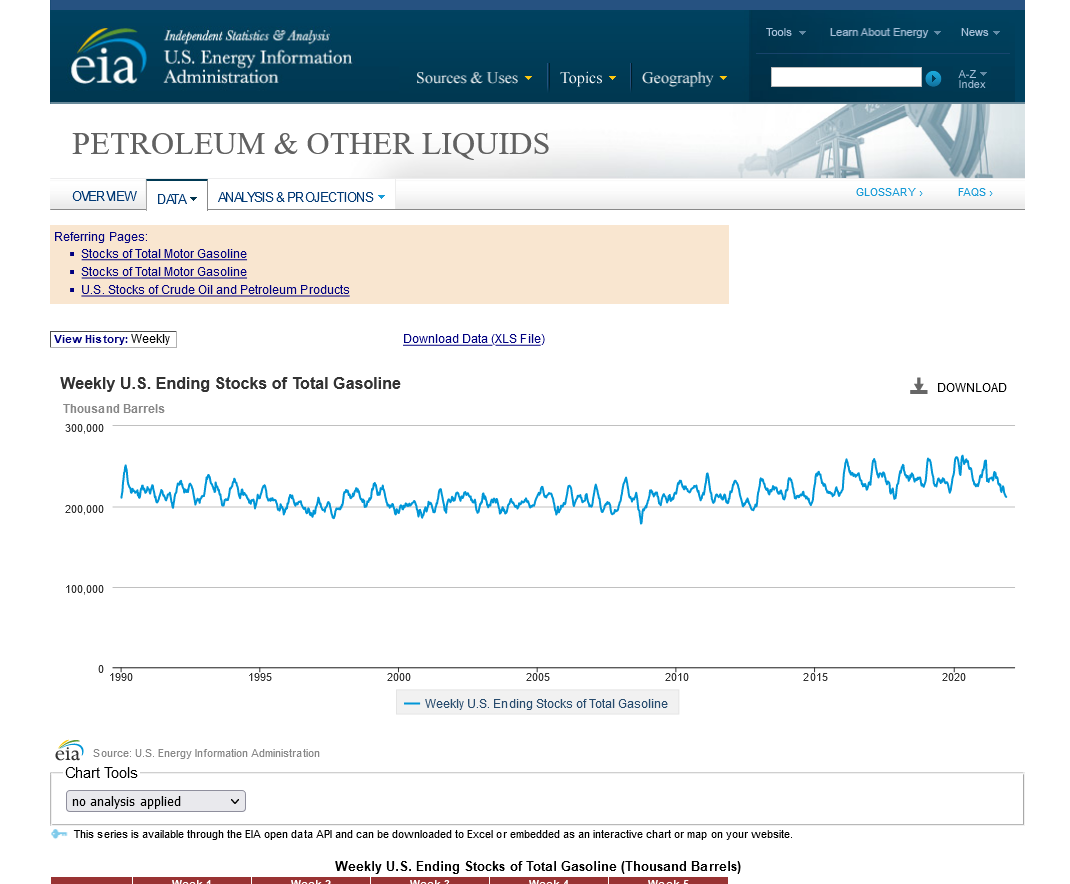 In another show of profound cluelessness, Biden authorizes taping the Strategic Oil reserve
0 likes
By metmike - Nov. 24, 2021, 12:25 p.m.
Like Reply

"We have 250 fewer oil rigs that are functioning today than we did before the pandemic, and yet, the oil and gas industry has leases on 23 million acres of public lands on and offshore," Granholm said. "Over 9,500 permits have been issued that are not being used. At the same time, the energy industry is making enormous profits. They're back up to above where they were before the pandemic started. So, they have taken advantage of that moment."

metmike: This is totally made up to blame the fossil fuel industry for people that don't understand what's REALLY going on!!!!!!!!!!!!!

THEY CAUSED THIS INTENTIONALLY because they are discouraging the fossil fuel industry from drilling as part of their war on fossil fuels which is rewarding wind and solar with massive subsidies/benefits and taking them away from fossil fuels.

THAT's the ONLY reason the permits are not being used........BECAUSE OF THEM!

This is nothing more than a creative PR stunt that somebody came up with in order to change the narrative from the one thats been rightfully blaming this administration for its jaw dropping ignorant energy policies.

They want people to believe that Biden is not really at fault. It's the evil/greedy fossil fuel industry that's price gouging us and raking in record profits.

Looky here folks..........Joe Biden has ordered an investigation into the oil/gas company  corruption.......he's standing up to them for us.

Looky here folks........Joe Biden is taking the extraordinary action of releasing SPR oil to use everything at his disposal  to fight against those greedy oil/gas companies.

Message to Biden: The authentic fix to the problem is well understood by energy knowledgeable people that aren't fooled by this hogwash.

Cut the DISinformation and take the handcuffs off the fossil fuel industry's production incentives(because of your fake climate crisis agenda) and let them go back to using the market forces BEFORE you interfered for political agenda......... so they can ramp up supplies................which is what they did every other time in history when prices increased like this.

Guess why they aren't doing it this time?

The war on fossil fuels!

Biden's side actually won that war and this was totally inevitable as I've stated 100 times here.

The reality is the wake up call which some of us told you would happen.

Fossil fuels are here to stay.

Re: Re: In another show of profound cluelessness, Biden authorizes taping the Strategic Oil reserve
0 likes
By TimNew - Nov. 24, 2021, 1:09 p.m.
Like Reply

Almost completely agree with your statements, except...

Fossil fuels are here to stay.

They are here for the forseeable future and remain the best source of energy available to us,  for now.

That will change,  but we are a long way from it.  Forcing the hand prematurely will result in catastrophic eco-consequence.

I didn't mean for eternity.

When will fossil fuels run out?

I'll betcha that hydrogen ends up being a significant energy source within the next decade!

great, cannot wait for hydrogen be vilified as much as carbon by the left

Great article that nails all the points I've been expressing here:

Wonderful article that nails the relevant points.
These recent announcements were moves designed to try to create a new false narrative…..putting the blame on other entities (evil fossil fuel companies) and not acknowledging the real reasons. Pretending to be fighting for lower prices……….while doing everything imagineable to CAUSE higher prices.

Here are the real reasons:

Crude oil ending stocks have been dropping fast. They are now down to the lowest in 7 years(since 2014). Gasoline stocks will soon to be the lowest in 7 years. They are dropping because demand is exceeding supplies as a result of MARKET FORCES, mostly from discouraging new production because of the war on fossil fuels.
Crude supplies have dropped around 100,000 barrels in the last year. Adding SPR oil will only slow the rate of decline for a short while and is like putting your finger in a dam leaking in several places to slow the loss of water in one place, instead of fixing the dam.

There are only 2 things that will push prices substantially lower for any sustained period of time.

Higher fossil fuel prices were not only  inevitable but they were exactly part of the plan. The financial incentives for fossil fuel companies to drill new wells is drying up. All the investment advantages and tax breaks are going to solar and wind to make them more competitive. Natural gas prices have doubled in the last year and for the first time in history, the number of  ng rigs drilling for new wells has not gone up ……….still half of the number of just 3 years ago…..when prices were LOWER than this.  The big money understands the war on fossil fuels and the best bang for their buck is solar and wind. This is actually what this administration has wanted from the get go…………exactly.

Much more comprehensively explained in the discussion at this link below:

"Now, for the Biden madness.  As far as I can tell, here are the key elements of Biden’s energy policy:

The energy source that Germany moves to shut down, rescued the country from widespread blackouts in 2021.

Lack of wind and sun, despite added capacity

The 2021 results further highlight the unreliability of green energies such as wind and sun as a source of stable energy, and remind that Germany’s plan to shut down its remaining coal and nuclear power plants will be far more difficult than the government appears to believe.

“In relation to total energy consumption, the share of renewables has decreased by a total of 16.1 percent compared to the previous year,” writes Blackout News. “Electricity generation by wind power plants fell sharply, by 18 percent for onshore plants and 14 percent for offshore plants.”

Solar energy fared even worse, producing only half as much as the year earlier.

To compensate for the missing wind and solar energies, both coal and nuclear plants had to take up the slack. Yet, these are the two conventional energy sources that the government aims to take offline completely by 2038 (nuclear by 2024!). A number a energy experts warn that this is a recipe for power grid disaster – especially as the German government moves to get more electric cars on the road.

Blackout News warns: “But if the government sticks to its plan to shut down the coal-fired power plants as planned, it is only a matter of time before the supply collapses. Therefore, prepare yourself in good time for a prolonged power blackout.”

metmike: Been telling you this would happen for years now.

Solar and wind are diffuse and unreliable and WORSE for the environment than fossil fuels.

Some wonderful data in this article!