This could probably be TR,  but how can you remain TR in a discussion of such abject stupidity on the part of a politician?

Isn't it amazing that just one short year ago,  companies behaved better?   I bet these rising prices are a vast right wing consiparacy to make Biden look bad.

Sad thing is,  roughly half the population would be willing to believe that.

WASHINGTON — As rising inflation threatens his presidency, President Biden is turning to the federal government’s antitrust authorities to try to tame red-hot price increases that his administration believes are partly driven by a lack of corporate competition.

Mr. Biden has prodded the Agriculture Department to investigate large meatpackers that control a significant share of poultry and pork markets, accusing them of raising prices, underpaying farmers — and tripling their profit margins during the pandemic. As gas prices surged, he publicly encouraged the Federal Trade Commission to investigate accusations that large oil companies had artificially inflated prices, behavior that the administration says continued even after global oil prices began to fall in recent weeks.

I remember when Nixon tried price controls. It didn't work out so well

Nope.  When you attempt to defeat basic economic laws/rules,  you lose.

remember when argentina tried price controls because the price on tampons were rising.

tampons disappeared from stores entirely.  you could not find a tampon anywhere in argentina.

people had to drive over the brazil or chile to get them.

Price controls are restrictions set in place and enforced by governments, on the prices that can be charged for goods and services in a market. The intent behind implementing such controls can stem from the desire to maintain affordability of goods even during shortages, and to slow inflation, or, alternatively, to ensure a minimum income for providers of certain goods or to try to achieve a living wage. There are two primary forms of price control: a price ceiling, the maximum price that can be charged; and a price floor, the minimum price that can be charged. A well-known example of a price ceiling is rent control, which limits the increases in rent. A widely used price floor is minimum wage (wages are the price of labor). Historically, price controls have often been imposed as part of a larger incomes policy package also employing wage controls and other regulatory elements.

The case for avoiding price controls in times of crisis: they don’t work

metmike: I'm  all for regulations that go after price GOUGING.......which is overcharging by greedy entities that take advantage of consumers to OVER charge based on the market conditions.

However, market conditions can sometimes include a shortage of certain items.  When there is an excess of demand that cannot be met with current supplies......the market MUST price ration in order to either.......stifle demand or create new supplies.

You sustain a very unhealthy unbalanced market for longer in that case. It actually backfires.

Trading commodities, many of us have heard this expression many times.

However, if there are ample supplies to meet/satiate demand and yet the market is trading at excessively high prices anyway...........I would call that price GOUGING.

By a wide margin, the biggest objective/affect of a president/administration claiming that they are using price control policies to control inflation is to try to give people, who have lost confidence in their ability to control prices.......a false sense of security.

Biden is doing this as PR student.........a marketing scheme.

If the presidents approval rating was at 70%, instead of the lowest yet and plunging, who really thinks they would be stating this?

Instead, they are saying the opposite. So this is just a ruse to try to trick people into thinking he's in control and knows what to do to fix this issue.........but just the opposite is true........or he wouldn't be resorting to this extreme counterproductive tactic.

Just like the really dumb tactic of draining the SPR oil to lower gas prices.

Just leave it up to the government, we have it all figured out and will fix it for you.

Interesting enough, it's their government agenda to kill fossil fuels, which is helping to spike energy prices higher(one of the biggest contributing factors right now-high energy prices cause everything to go higher) which they don't want you to know.

They are doing the complete opposite but  instead using 'fake" ineffective and counterproductive measures.

To me, this policy says the total opposite of what they want people to think.

It means they totally don't understand markets or they do understand and want to  instead, bamboozle people with convincing sounding schemes so they don't get the blame for their massively flawed energy policies, which is all they really care about.........pushing the fake green agenda along at the expense of Americans.

Price has a job to do.  One of them is rationing.

Take a hypothetical that actually has real world experience.

A hurricane is forecast to hit Florida.  Residents begin to evacuate  by the thousands. One of the group, a husband, wife, two kids and his mother in law.

Scenario one.   A cheap hotel in south Ga charges $80 per night per room.   Dad figures he can swing 3 rooms.  One for the kids, one for MIL and one for him and the wife for a cozy night of privacy. Many others follow suit and soon there are no rooms for anyone at any price and the late comers will have to drive hundreds of miles to find something, perhaps all the way to Atlanta where rooms will be much more expensive.

Scenario two. Same as scenario one, except the hotel raises prices to $200 per night per room.  Dad figures they can fill the 2 queen beds and the chair in one room and 3 times as many people stay at the hotel.

This is the real reason to do it:

How unpopular is Joe Biden?

An updating calculation of the president's approval rating, accounting for each poll's quality, recency, sample size and partisan lean. 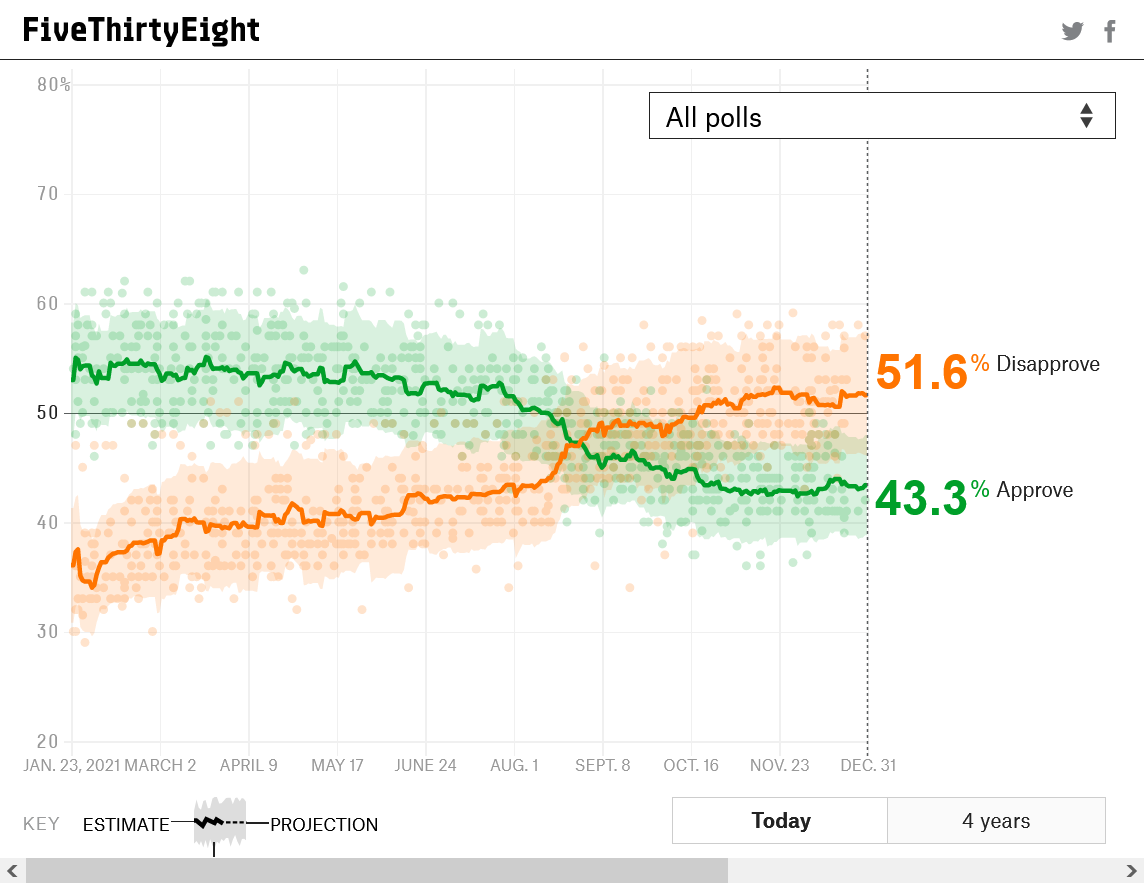 It's all because the press is soooo  unfair.  Trump would have paid for the type of coverage the fawning media offers Biden,  but,  we have a new definition of "fair"..

And yet price for 2021 grain is more than double [here]

COP to produce 2021 production was at equal/normal prices for last few yrs.

Is that price gouging according to what you  posted???:

Not trying to stir up trouble

Every market has its own dynamics.

When it's a global market as grain trading or crude oil trading is, then the US has less control in trying to control prices for just our country.

We lost control of the natural gas market when exports because huge. Now, global prices double ours cause our prices to go up from exports to those areas increasing/competing.

If the price of corn/wheat is too high here...........other countries will get their corn or wheat elsewhere. This reduces demand and causes our price to drop in order to be competitive.

Not necessarily in a few months but over the course of a growing season....usually.

When crop prices are high, even if they are higher than they should be based on historical analogs, in the long run, things balance out because farmers usually plant more of whats the most profitable...which increases supply.

The ethanol demand being many billions of bushels put a solid bottom in for prices. You'll never see prices below $3 again......unless they go to mostly electric cars, which would be impossible in the current world.

We can't even replace fossil fuels for current demand for electricity using solar/wind, not even close, let alone doubling the demand for power from vehicles.

That's obviously an over simplification.

You remember when they tried to reduce acres with the PIK and other programs that were supposed to increase prices for farmers that didn't work?

The other thing too on corn prices. Farmers are not all colluding with each other...........holding off selling all their corn and just storing it in their bins to force prices higher.

If there was strong evidence of that, then I would be for actions to counteract this collusion.

Farmers will often hold off selling when prices are going higher because they are often too bullish. But market conditions and rationing demand have always kicked in at the higher prices, which keeps the prices from being manipulated from collusion.

So why are corn prices so high here?