Fruit drop continues to be a big story in the orange crop. USDA reports that drop in non-Valencia (excluding Navels) varieties is at 39%. Valencia fruit drop is above average and is projected to be above average at harvest.

And Covid infections are presumably at their highest ever, last year given as reason for OJ price rise from about $1 to $1.40.  Now, taking that as a width to double again, may we see a rise from approximately $1.40 to $1.80?  With objective into the $2.00 range.  Should parallel coffee price rise as per both supply and demand pressures. Plus, through in Brazilian drought.  Maybe I need the NG cold arctic express to kick that OJ into stratosphere?  Never seen so many posterrs make so much money ever on this Forum!  C'mon Man, let it be my turn, now!

Thanks for the study hayman,

However, the period that they studied was back in the 1970's/early 80's that doesn't apply that much anymore here in 2022.

Sao Paolo in Brazil is by far the leading producer of the orange crop, so it's the weather there that matters the most and the dry weather/drought was earlier in 2021 in Sao Paolo.

The upcoming weather is favorable for rains in Sao Paolo.

Here's the last 18z GFS ensemble. Rains the next 2 weeks. 3+ inches everywhere in Sao Paulo close to 6 inches northeast SP. No that's not too much rain. 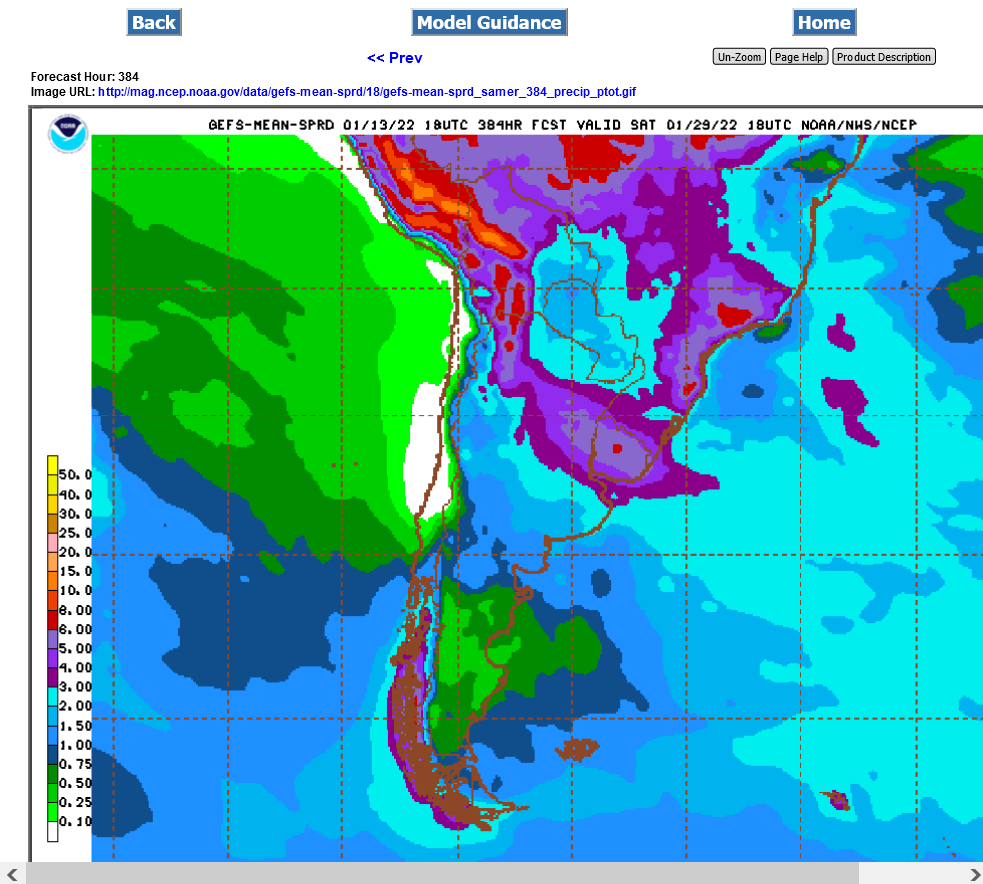 There is a very low chance for a damaging freeze in Florida the rest of this month. It might get down close to 40 in parts of the northern belt next Tuesday, 15 degrees too warm for major damage.

Soil moisture in Florida is a bit dry but not a big deal. 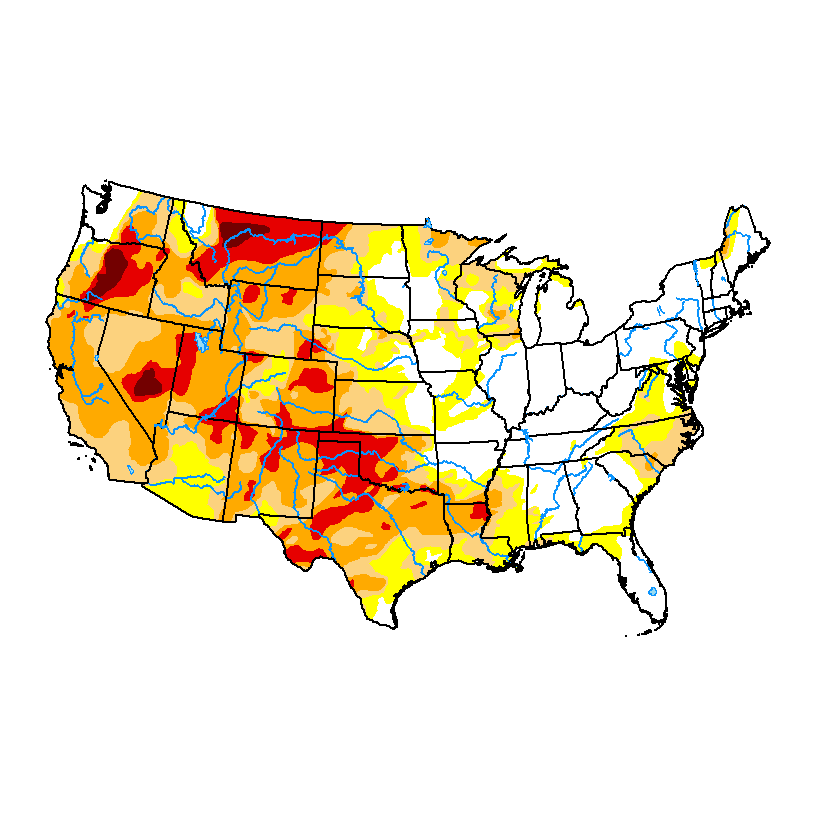 Here's where they grow the orange crop in Florida:

But the US has not been the #1 producing country in the world for oranges for a long time. Brazil has that distinction(mostly Sao Paolo). They grow most of the oranges in Brazil in Sao Paolo(more than double US production), shaded red on the map below:

How Brazil stole the production of orange juice from Florida

Argentina and S.Brazil have been extremely dry the last 3 months! But its all SOUTH of Sao Paulo.

Precip % average the last 90 days below

Tons of rain coming up!

This data comes from the GFS/US model.

It's constantly updated every 12 hours. 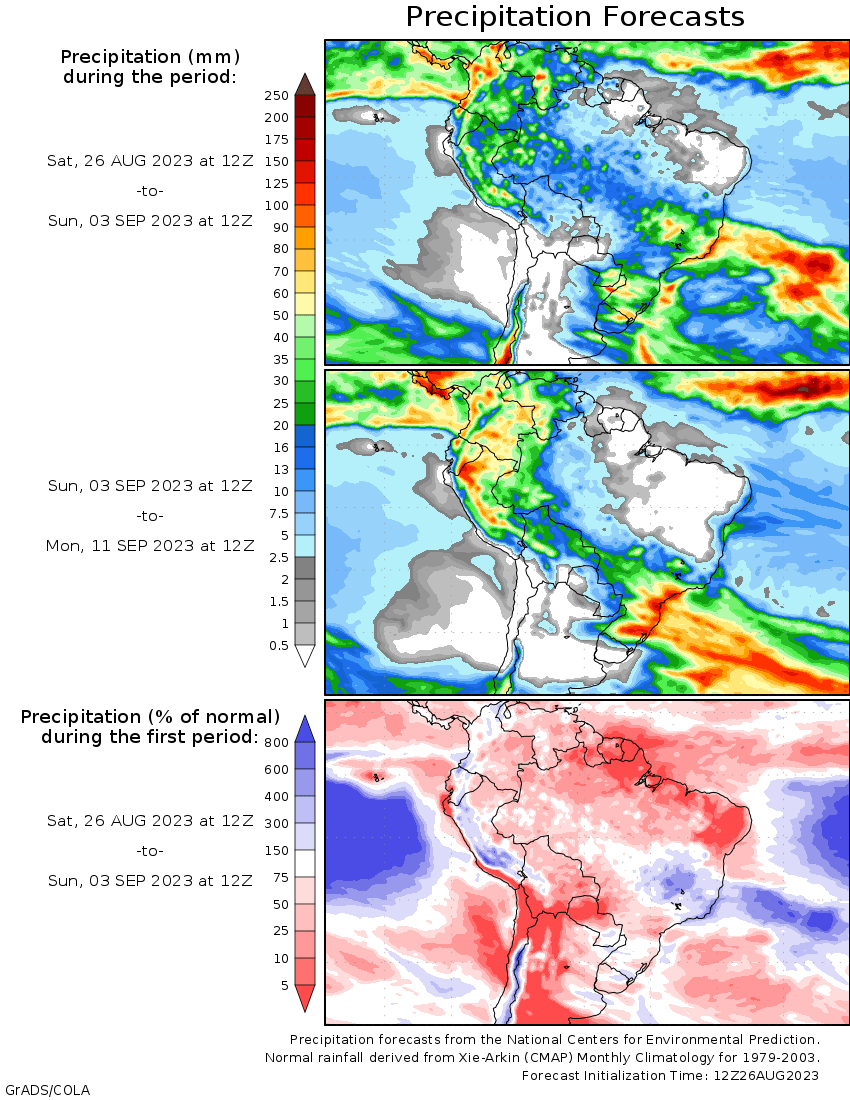 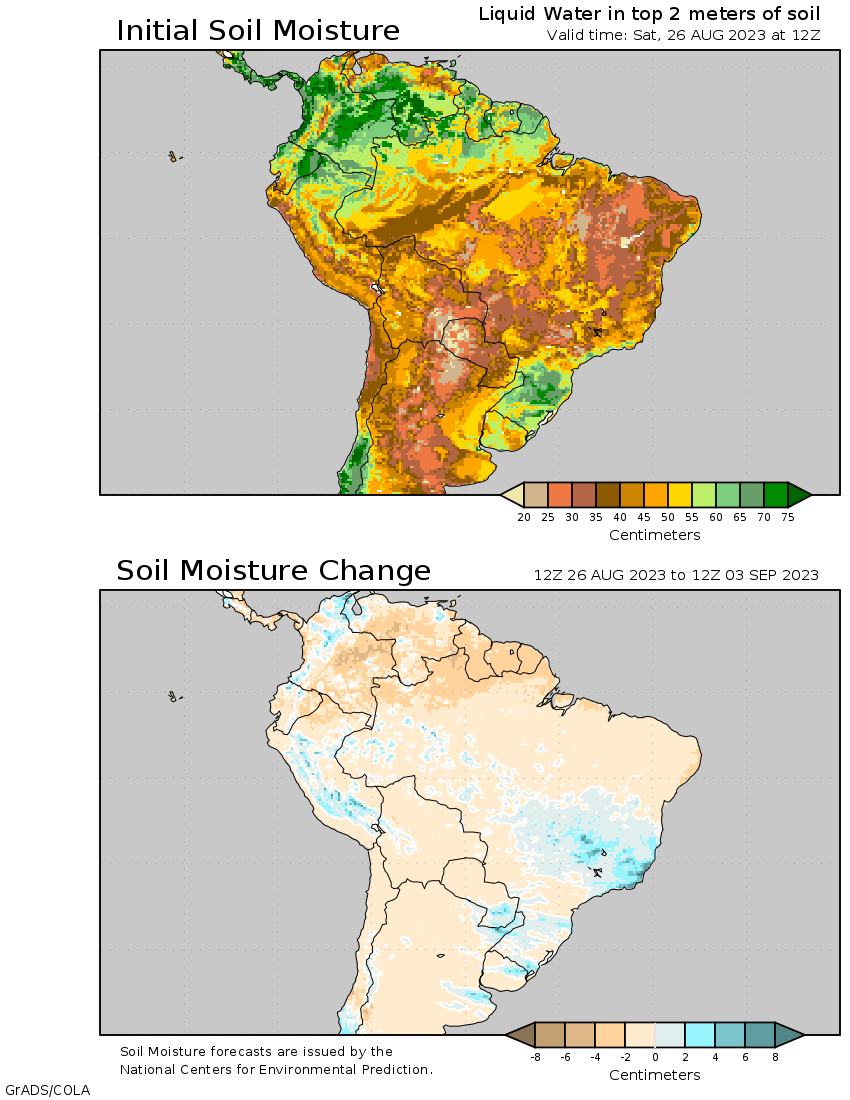 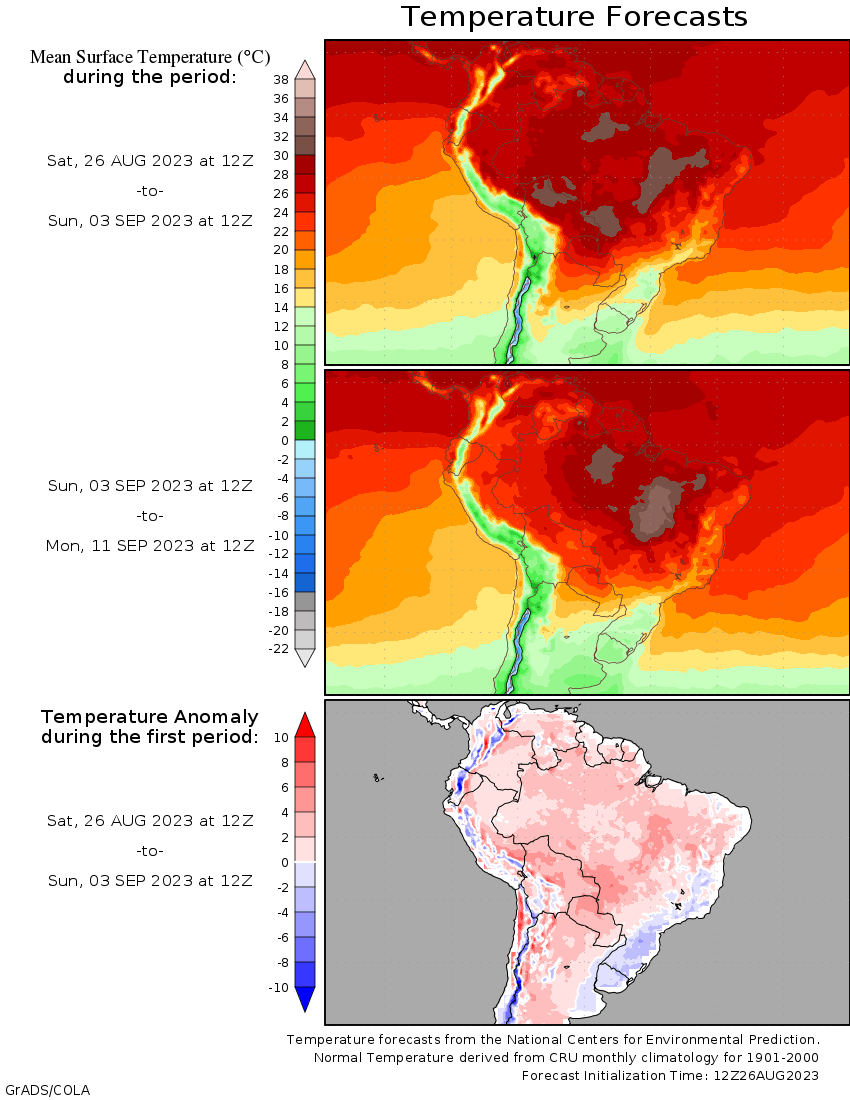 The upcoming weather is favorable for rains in Sao Paolo.

Here's the last 18z GFS ensemble. Rains the next 2 weeks. 3+ inches everywhere in Sao Paulo close to 6 inches northeast SP. No that's not too much rain.

OJ seasonals are strongest in Oct/Nov to the start of Dec!

Used to be called freeze premium ahead of the Winter in Florida but one of the many global warming benefits, includes much less freeze damage risk to crops in Florida during our Winter and Florida weather is not as important any more.

Prices would typically fall in December/January/February in seasons without a freeze with the Florida crop being harvested then. 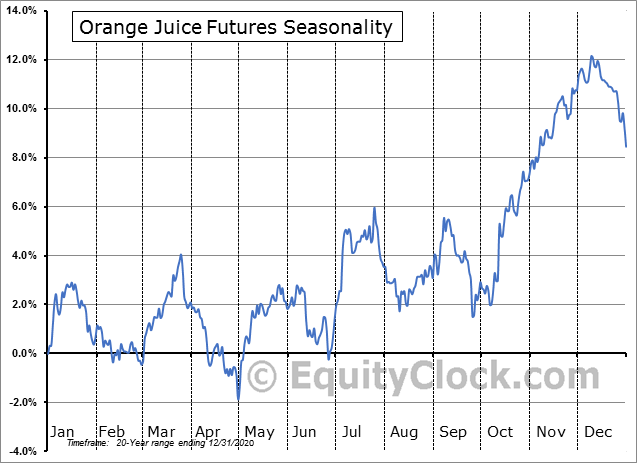 OJ prices, historically have had a strong tendency to go up in the late Fall, very start of WInter,  then drop after that. 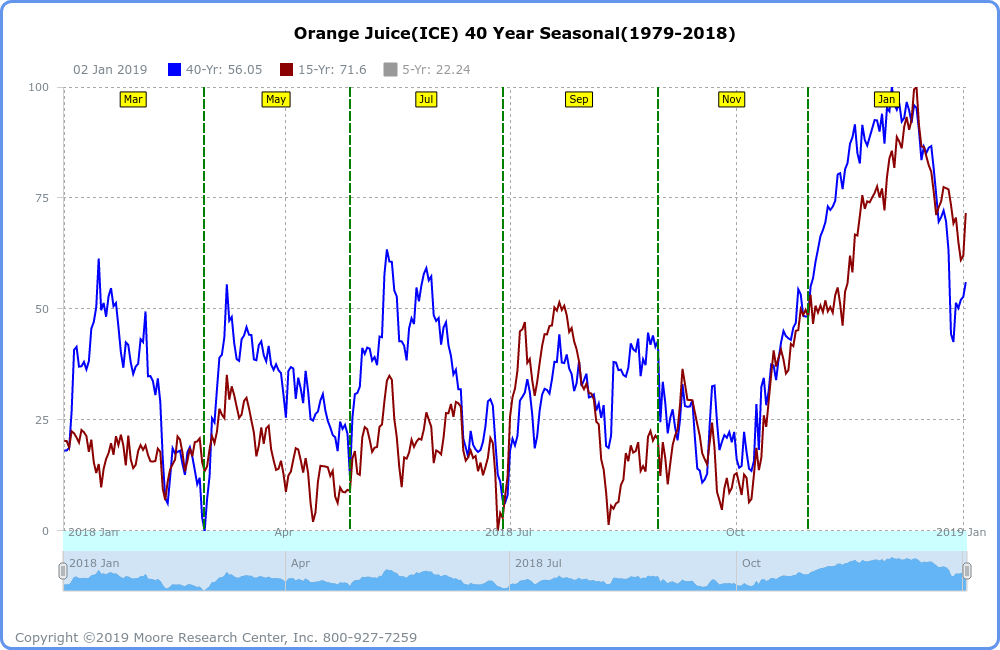 One thing I took note of after I began trading in 1994, was that there is a lot to learn about each market. We tend to refer to some of these things as "fundamentals". And they are. And that each individual fundamental, can have a varied influence on each market. And in doing research into the OJ market, I stumbled upon something, that I haven't paid attention to before. You learn something new every day.

People in the citrus industry and most OJ traders have known about that one for many decades!

In the later 1950s, residents of New York City looking out at the city’s ports could often find the familiar sight of the S.S. Tropicana, an 413-foot, 8,000-ton steamship that made a weekly trip up the Atlantic coast from its loading point in Port Canaveral, Florida filled with precious cargo: stainless steel tanks holding a total of 1.5 million gallons of fresh-squeezed orange juice. Until water transport was eventually scrapped for rail shipping in 1962, partly in an effort to reach the burgeoning Midwest market, Tropicana’s flagship steamer served as a life-sized representation of both Americans’ insatiable thirst for the citrus juice and of the engineering and logistical feats required by the fruit company to fill that demand.

Fast forward to 2021 and that ship metaphor takes on a wholly different meaning. Despite reporting sales growth in 2020, Tropicana had been resembling a rusty, dated cruiser for much of the past decade, as a variety of practical challenges, from distribution issues to encroaching competition from non-juice brands, combined with the anti-sugar movement to create a perfect storm of disruption for the category. The Florida-based company isn’t the only one feeling the squeeze: over the last 12 months, two other legacy brands — PepsiCo’s Naked and Coca-Cola’s Odwalla — have been either sold or divested completely, while Suja, once considered an integral piece of Coke’s strategy to pivot away from soda and into more natural categories, was acquired by private equity firm Paine Schwartz Partners in July.

Compared to that, things in 2021 are pretty much upside down: not only are sodas as popular as ever, but the big bets that conglomerates like Pepsi, Coca-Cola, Hain Celestial and The Campbell Soup Company made on juice have all failed to pan out (the exception being Starbucks, which owns premium cold-pressed brand Evolution Fresh). Even as technology has helped improve product quality and shelf-life, the deck remains stacked with logistical problems and extra costs, not to mention long-term declines in consumer demand.

Many of those issues have been an ongoing challenge for juice makers, but this year, corporations determined that they simply weren’t worth the trouble anymore. Divestment and a culling of bulging brand portfolios has been a consistent theme across the major industry players over the past year, which has seen Nestle Waters offload its U.S. water business and Coca-Cola put long-standing brands like Tab and Zico out to pasture. But the biggest moves have come in juice — first with Coke’s closing of Odwalla in July 2020, and followed this year by the exits for Suja, Tropicana and Naked. The motivation, according to Euromonitor’s Howard Telford, is to keep the focus on a smaller group of high-performing categories — water, energy drinks, coffee and carbonated drinks, mainly — rather than continuing to work in a challenged segment.

coldest its been in a while...  definite arousal possible.  And with a short and weak crop, high fertilizer costs, Covid demand pressure, supply and labor disruption...