Red Sox legend David Ortiz was the sole player voted into the Hall of Fame by the Baseball Writers’ Association of America, making it in his first year on the ballot, with the announcement coming Tuesday on MLB Network. Ortiz was named on 307 of the 394 ballots (77.9%).

Ortiz joins the six men voted in by the Golden Days and Early Baseball Era committees back in December: Jim Kaat and Tony Oliva, and the late Bud Fowler, Gil Hodges, Minnie Miñoso and Buck O’Neil. They will all be honored at the July 24, 2022, induction ceremony in Cooperstown, N.Y.

(Players receiving less than 5% will drop off future ballots)

What do you guys think of this?

Alex Rodriguez on PED suspension: 'How stupid can you be?'

Barry Bonds’ Before and After Photos Tell His Entire Story

Timeline of the Clemens scandal

In February 2004, Major League Baseball announced a new drug policy which originally included random, offseason testing and 10-day suspensions for first-time offenders, 30 days for second-time offenders, 60 days for third-time offenders, and one year for fourth-time offenders, all without pay, in an effort to curtail performance-enhancing drug use (PED) in professional baseball. This policy strengthened baseball's pre-existing ban on controlled substances, including steroids, which has been in effect since 1991.[1] The policy was to be reviewed in 2008, but under pressure from the U.S. Congress, on November 15, 2005, players and owners agreed to tougher penalties; a 50-game suspension for a first offense, a 100-game suspension for a second, and a lifetime ban for a third.

Roger Clemens releases statement after falling short of Hall of Fame election: ‘I didn’t play baseball to get into the HOF’

The Steroid era, should be taken in context.

I would give the nod to Clemens and Bonds.

Each of them were the very best for several years before the steroid era.  Bonds earliest possible use of PEDs according to investigations is 1998 when he switched trainers.  By that time, Bonds had already won 3 MVPs.  Name me another player not in the HOF with 3 MVPs.

Similarly with Clemens.  He was winning Cy Young awards before the steroid era.

The steroid era reminds me of the movie Casablanca: "I'm shocked to see gambling in this place."

Gaylord Perry through spit balls (illegal) for 20 years.  He even wrote a book called "Me and the Spitter".  He's in the HOF.

If you want to put an asterisk on their plaque I'm OK with that.  Put Pete Rose in while you're at it.  I was a Sosa fan, but I think he falls short.

I agree totally joj!! Thanks for the comments.

My view is actually a bit biased......but then, it's one that understands the realities that average Joe's are clueless about. ........ because I competed powerlifting and body building.

I took steroids for a couple of months when I was in college and fortunately, I didn't have much money or I probably would have been tempted to do it longer back in those days.

I extremely over trained in those days to the point of it being counterproductive.... so mostly it just allowed my body to recover better.

When I competed I was NEVER on steroids and the last contest was a drug free one in 1984(Mr. Evansville).

Bodybuilding and power lifting has more anabolic steroid use than any other sport by a wide margin. That's exactly  what testosterone does best. It adds muscle(body building) and strength(power lifting).

In baseball, it doesn't give you better timing or skill hitting or catching a ball. It doesn't make you a better pitcher or better defensive player.

However, the main benefits are to power hitters.....increasing power to hit baseballs farther. More home runs.

If you're a pitcher, to recuperate quicker from the tremendous wear and tear on your arm from throwing 100 pitches, some at 95+ mph in a game.

All players would recuperate quicker from injuries and the wearing down of their bodies from playing baseball every day as the season goes on.

That's what steroids to.

So let's discuss the mentality and what's at stake.

These guys, like all professional athletes ate, sleep, exercised and practiced most of the day and most of their lives to be the best in their sport.

Many of them had many millions of dollars at stake in income which was tied to productivity while playing their sport.

Many people will just call using steroids "cheating" without fully understanding the mind set and what is really happening.

Most pro athletes have insane nutrition, exercise and practice routines to try to get their bodies to do things that you and me can only imagine in our dreams.

They are mostly genetically gifted too but also work extraordinarily hard and use every supplement or tool known to mankind to get the most out of their bodies.

Every human body has certain amounts of vitamins, minerals, hormones, proteins, carbohydrates, fats, nutrients and so on that it metabolizes to generate tissue, blood and so on to stay healthy/fit/strong  and basically be at the best shape possible to perform whatever physical endeavor that body performs at an optimal level.

Every one of those elements are important, some more than others. Turns out that the one more important than any of them..........is a man's testosterone level.

Men have higher testosterone levels than women, which is one advantage of being a man in playing many sports.

Some men actually have much higher NATURAL testosterone levels than other men.

There have been some men that failed drug tests because their natural testosterone levels are so high. Further testing can distuinguish between natural and synthetic test.

So if we have known freaks out there, men who's bodies naturally produce more than triple the testosterone as other men competing against them, it makes the understanding of testosterone in the body better.

Look at this wide range in testosterone of Olympic athletes on the graph below: 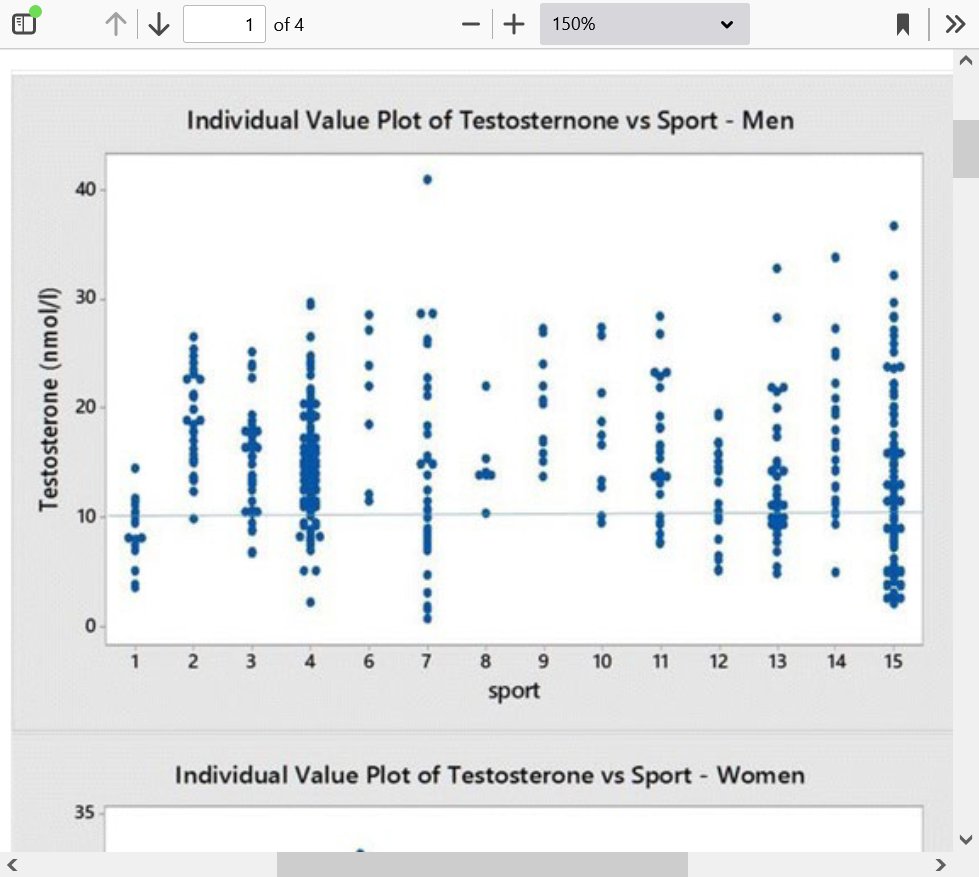 Why wouldn't it be fair for a man with only 10 nm/l (or less) to boost his testosterone to the 30 nm/l that other men are at???

I think actually, that probably some men KNOW what the limit is when they test and could be taking extra test to boost to that level.

Also, your test drops from the late teen years for the rest of your life. Would it be unfair for a 40 year old to practice "hormone replacement therapy" to compete to the same level as the younger men he competes against?

I agree with putting an asteric next to their names and especially with letting Pete Rose in.

This mentality is what defines most of their frame of mind but on steroids........it the sport that must set the standards/rules and test to reign in that obsessive mentality that drives them to get an edge.

When Mark Magwire and Sammy Sosha were having a home run battle, you better believe MLB knew with certainty that they were using testosterone to get there.

But MLB loved the attention and many millions of $$$ that it was generating in revenue.

If I was in their shoes and aware that MLB was looking the other way and it meant millions of dollars more in my personal income and a huge bonus to my offensive stats/value..............I would probably have considered doing the same thing!!

Jose Canseco Reacts To The Hall Of Fame Controversy

Hall of Fame voters seem content in allowing certain players into the Hall despite their past misgivings as it pertains to performance enhancing drugs. However, Bonds and Schilling failed to meet their criteria for whatever reason.

Bonds, at least, was destined for the Hall of Fame long before he was linked to PEDs.

For now, it looks like he and Schilling will have to live with not making the Hall.