It's still  hilarious even after watching it 10 times!    But there's a wonderful underlying theme!

Rubin conceived the outline of Groundhog Day in the early 1990s. He wrote it as a spec script to gain meetings with producers for other work. It eventually came to the attention of Ramis, who worked with Rubin to make his idea less dark in tone and more palatable to a general audience by enhancing the comedy. After being cast, Murray clashed with Ramis over the script; Murray wanted to focus on the philosophical elements, whereas Ramis had concentrated on the comic aspects. Principal photography took place from March to June 1992 almost entirely in Woodstock, Illinois. Filming was difficult, in part because of bitterly cold weather, but also because of the ongoing conflict between Ramis and Murray.

Groundhog Day was considered a box-office success on its release, earning over $105 million to become one of the highest-grossing films of 1993. It also received generally positive reviews. Reviewers were consistent in praise for the film's successful melding of highly sentimental and deeply cynical moments, and for the philosophical message beneath the comedy. It received multiple award nominations and won a BAFTA Award for Best Original Screenplay. For all its success, the film marked the end of Ramis's and Murray's long collaborative partnership, which produced films like Caddyshack (1980) and Ghostbusters (1984). The pair did not speak after filming until shortly before Ramis's death in 2014. The film was a showcase for Murray; previously seen only as a comic actor, his performance led to more serious lead roles in critically acclaimed films.

In the years since its release, the film has grown in esteem and is often considered to be among the greatest films of the 1990s and one of the greatest comedy movies ever. It also had a significant impact on popular culture; the term Groundhog Day became part of the English lexicon, meaning a monotonous, unpleasant, and repetitive situation. The film has been analyzed as a religious allegory by Buddhists, Christians, and Jews. Groundhog Day is also credited with the mainstream acceptance of comedy films featuring fantasy genre elements. In 2006, the United States Library of Congress selected the film for preservation in the National Film Registry. Groundhog Day has been adapted into a 2016 musical and a 2019 video game sequel, Groundhog Day: Like Father Like Son. 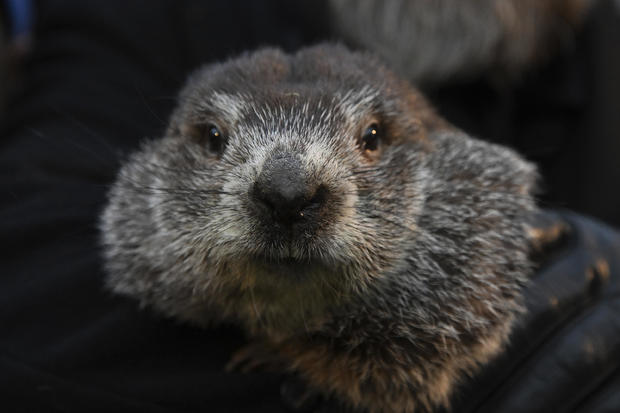 Groundhog Day (Pennsylvania German: Grund'sau dåk, Grundsaudaag, Grundsow Dawg, Murmeltiertag; Nova Scotia: Daks Day)[1] is a popular North American tradition observed in the United States and Canada on February 2.  It derives from the Pennsylvania Dutch superstition that if a groundhog emerges from its burrow on this day and sees its shadow due to clear weather, it will retreat to its den, and winter will go on for six more weeks; if it does not see its shadow because of cloudiness, spring will arrive early.

While the tradition remains popular in the 21st century, studies have found no consistent correlation between a groundhog seeing its shadow and the subsequent arrival time of spring-like weather.[2]

The weather lore was brought from German-speaking areas where the badger (German: Dachs) is the forecasting animal. This appears to be an enhanced version of the lore that clear weather on the Christian festival of Candlemas forebodes a prolonged winter.

The Groundhog Day ceremony held at Punxsutawney in western Pennsylvania, centering on a semi-mythical groundhog named Punxsutawney Phil, has become the most frequently attended ceremony.  Grundsow Lodges in Pennsylvania Dutch Country in the southeastern part of the state observe the occasion as well. Other cities in the United States and Canada also have adopted the event.