So, biased "right" and "mixed" on factual meaning not as bad as a site like ZeroHedge, which was rated "far right " and "low' for factual reporting.

gee thanks for the report Larry, Now what do you think about our VP breaking established agreements and the Biden crime family just doing what they do? And don't worry most all know full well not a thing is going to happen to them.

“gee thanks for the report Larry, Now what do you think about our VP breaking established agreements and the Biden crime family just doing what they do?”

You’re welcome. ;) Harris has been awful at just about anything she has handled. I don’t know that she’s done anything impeachable, however.

Imho, Biden should ditch her for his re-election run. I sure wish Evan Bayh were still active in politics. He was a true moderate.

I got a nice chuckle out of this part:

I decided to read a bunch of their articles on climate change.

To see if they have a better grip on the reality of what's going on with climate change than the consensus!

There were some inaccuracies in this article:

This was a bad article too:

This one has great insight/enlightenment........mixed in with total bs

OK, they are full of doo doo! Anti science places like this, cause people with the same skeptical position..but using authentic science,  to get a bad rap! 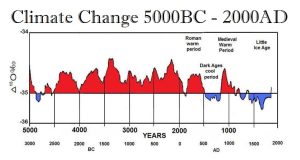 impeach biden and you get harris, who is worse than biden.

impeach harris, and you get pelosi, who is just as bad as harris.

so can we go thru 3 impeachment proceedings ??????

yes, sometimes he (MA) gives a strange analogy.  comparing a doctor treating a patient to global warming is not a great comparison.  but he is simply trying to point out that corelation is not the same as cause and effect.  and there is a difference between underlying cause versus a symptom.

so i understand his point but his use of that analogy is not the best.

the graph is useful.  yes, i have seen reports (even from people who believe in human caused warming), that the earth was warm going into the roman period.  there is more alpine glacial ice today that what there was in 500 AD.  there are glaciers melting in alaska, and below them are forests that were alive and thriving 1000 years ago.  some of the glacial ice that is melting today was bult up during the little ice age of the middle ages.

so a warm up, (regardless of the cause), will not end society as we know it.

it is more problematic trying to see where the cycle goes next.

the earth has been much warmer, and much colder than what it is today.