Scroll down for more:

Soils are a bit too cold across Iowa right now for any widespread #corn planting.

Soil temps as of Sunday were hovering around 40F, but 50F and above is most preferable to plant corn.

Air temps will be chilly most of this week, but warmer weather is forecast this weekend. 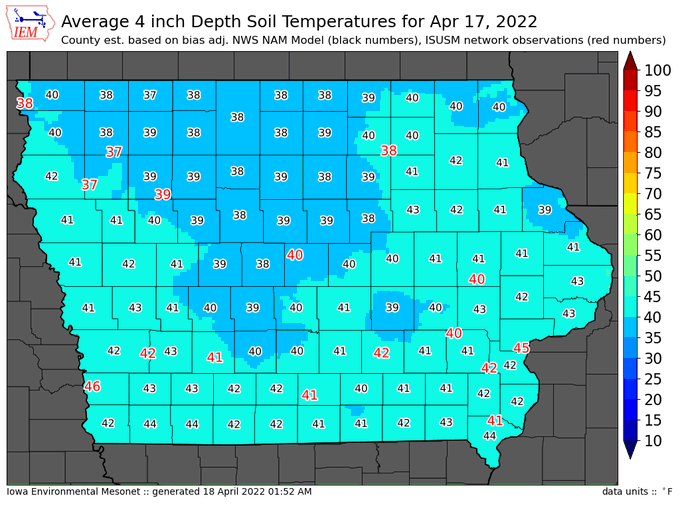 In Illinois, the No. 2 #corn producing state, soil temps are fine in some areas.

Parts of Illinois has gotten ample recent rains, so wet soils are the issue there. Monday is fairly cold and northern areas received snow overnight. 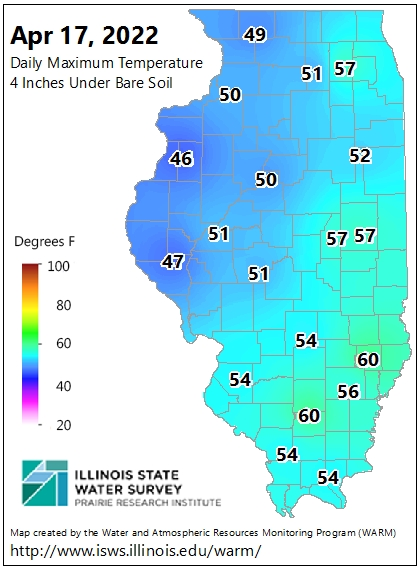 Close to the lowest April rating in history still.

Not the best forecast either(which was a big part of the rally today):

U.S. winter #wheat conditions dropped 2 points to 30% good/excellent as of Sunday. Trade was looking for a slight improvement. #Corn is 4% planted, #soybeans 1%, spring wheat 8%, all behind last year & average, and slower than trade expectations. 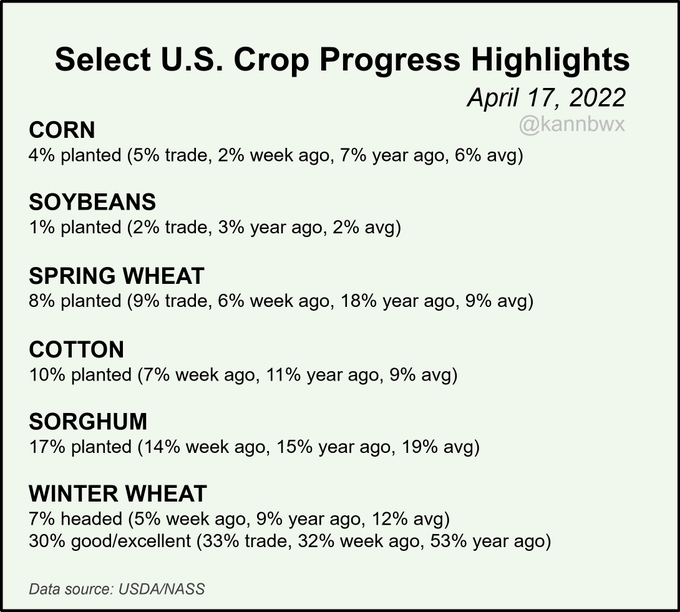 Freeze warning in purple will feature temps not cold enough to hurt wheat this early in the chilly so far, Spring.

Jim printed the entire report out for us:

Extended is not as cold. Should help corn planting to get started in early May, which could finally warm up.

12z guidance all came out colder in week 2 than previous run but they are all pretty dry.

#Brazil is expected to harvest a massive second #corn crop (the one heavily exported), but an upcoming dry stretch, especially if it continues, could threaten fields in the center of the country. Brazil is the No. 2 exporter

Corn growers are going to plant in the right timeframe, hoping for future success.  But it's the reaping that counts.

All sorts of things contribute to the final yield at harvest.

Planting is just the start of it. Planting late can make the crop more vulnerable.

With corn, those huge leaves are what gather energy for the plant from photosynthesis. The amount of energy coming from the sun, peaks on June 21st and is greatest between April 21st and August 21st.

If you start planting too late and shift the time frame when the leaves gathering energy are at a less optimal sun potency  level, you will lose a few % of yield potential.

If you start on May 21st, for instance, you can still have a great crop, even a record crop if the more important weather is perfect during the growing season but producers want to have every edge they can and planting late.......takes away this edge.

August, is usually the driest month of the Summer. If you plant late, the crop is more likely to encounter adverse moisture conditions during filling. ....possibly even during pollination in late July.

You will also increase the risk from an early freeze in September in the northern Midwest before enough growing degree days have accumulated. Maybe it's only a 5% risk of a serious yield harming freeze in an average year but if you plant early, it can be down to 2% and plant very late, it can be almost 10%.

You can plant too early too.

You don't want seed sitting in the cold soil for a long time waiting for warmer temperatures to germinate. This can cause all sorts of issues, including poor germination.

If you plant super early, the crop is at risk for a late Spring freeze. Usually, this will just burn the foliage above ground but that setback, steals more energy from the plant and take away long term yield.

You don't want to plant in wet soils. This compacts the soils and germination in wet soils means the early root systems will not expand in search of moisture. Expansive/deep Corn roots are a farmers best friend all season long.

Shallow roots from wet soils early will not have access to deep moisture needed later in the Summer when the soil moisture is drying up or as much of the other minerals/nutrients in the soil.

Planting too wet/cold or before a very heavy rain can also cause uniform germination problems.

The most important thing is ample, well timed rains in June-August, as well as avoiding excessive, long lived heat waves........especially in August, when the kernels are filling.

Extremely warm/humid nights in August can accelerate the filing and cause "heat fill". Something we know alot about in S.Indiana.

This might seem like a great plus to bring the crop to maturity faster but IT'S NEVER a good thing. 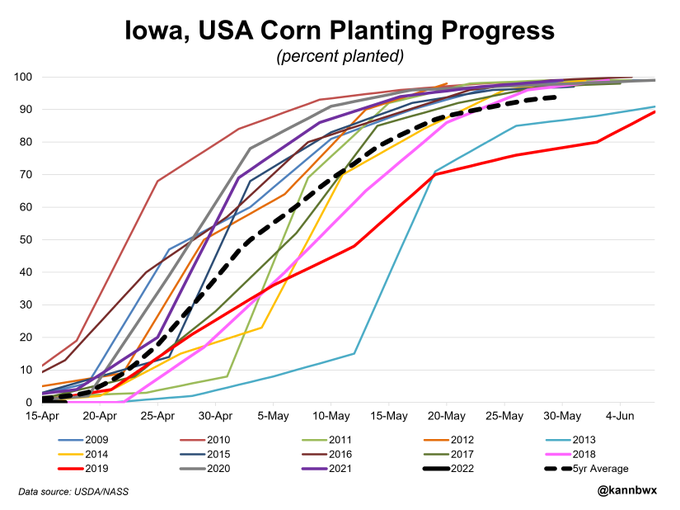 Now versus a month ago. Drought has expanded in the Plains (HRW wheat country, Nebraska, somewhat SD), but it has retreated in North Dakota and parts of the Midwest. Planting into dry soils is not the problem (actually it helps), but the fear is continuation of the dryness.

U.S. #drought conditions this week versus the previous 3 years. Dryness expanded considerably in Nebraska this past week, but other Corn Belt areas are slightly improving. More than half of North Dakota is now drought-free for the first time since Aug. 4, 2020. 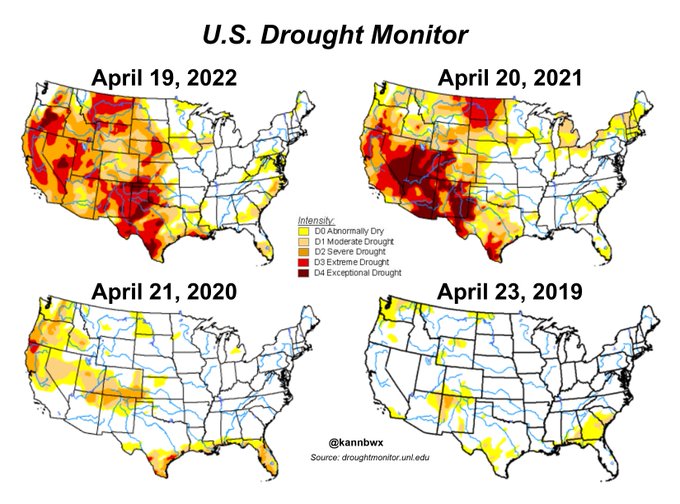 Sunflowerseed is primarily grown in #Ukraine's east, including the most heavily disputed areas. Estimates have already suggested sunseed plantings could be the biggest victim this year, down more than normal versus other crops. 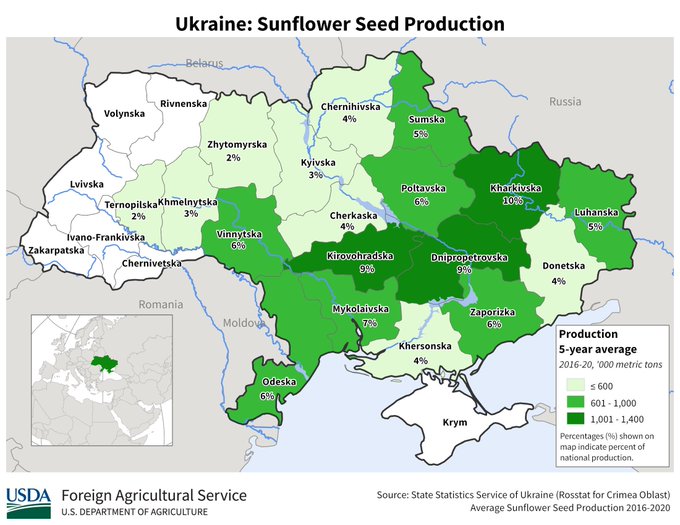 The ministry says planting in northern areas where fields must be de-mined could fall 30-40% on the year. It is not clear exactly where the mines are and how many are in discussion, but #corn is primarily grown in #Ukraine's northern oblasts. 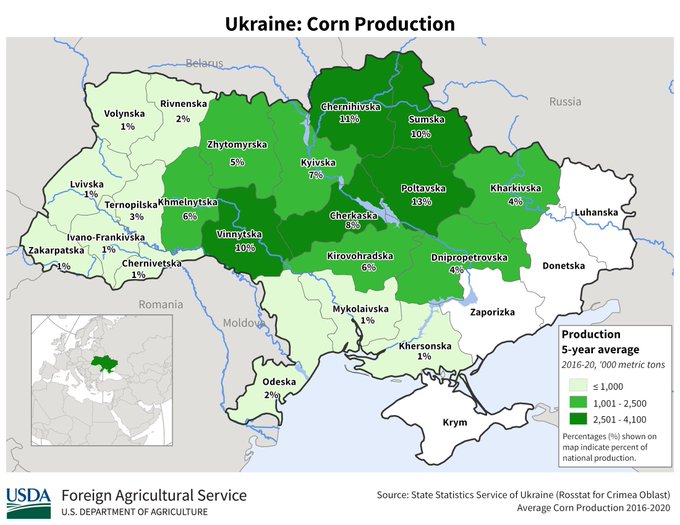 #Ukraine says farmers there have sown 20% of the spring area, some 2.5M hectares. The ministry sees spring area down about 20% on the year, but some analysts see more downside. No official harvest or export forecast has been issued. 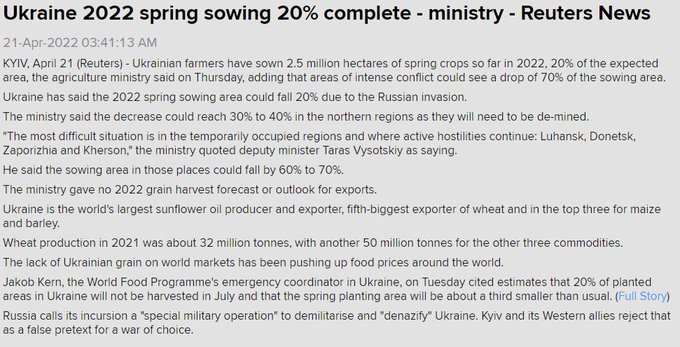 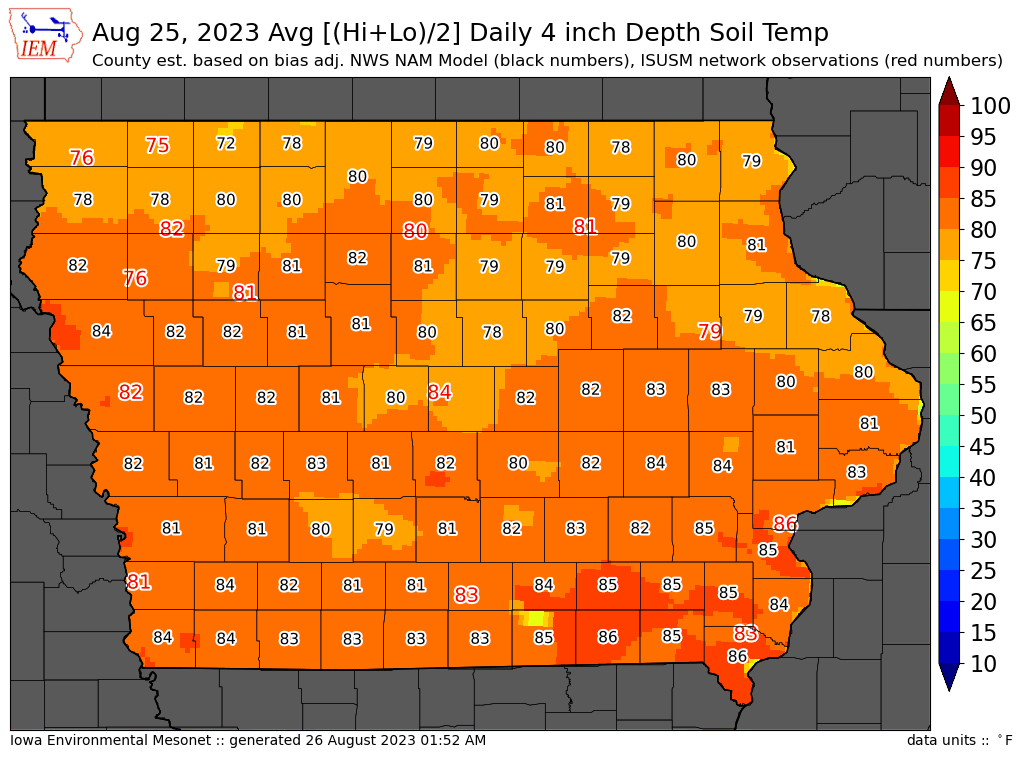 Central and especially S.IL soil temps actually cooled off during this last cold spell but will jump higher with this shot of heat......also in S.IA...........then another shot of chilly weather next week!

Earlier, my thinking was that next weeks return to chilly weather will last into the first few days in May THEN, we could finally warm up and planting could accelerate rapidly in the areas that  are not too wet.

Most of the ECB is just too dang wet right now and it will take a couple weeks of drying for us in S.Indiana to even think about planting, except for maybe some  well drained high ground........as long as we avoid any unexpectedly heavy rains.

I was looking at the last European model and it has a pretty decent system with(not excessive but fairly widespread) rain coming towards the end of the first week in May, which could delay things an extra several days and try to reinforce the cold air boundary farther south to keep the heat from moving in with gusto.