Here are some plots that I did  of the Arctic Sea Ice during the past decade.

The first graph below has all the years, from 2022 dating back to 2012, the lowest and the dashed red line.

Since it's hard to see where the most recent year+ is in that cluster of colors, I separated them out below that: 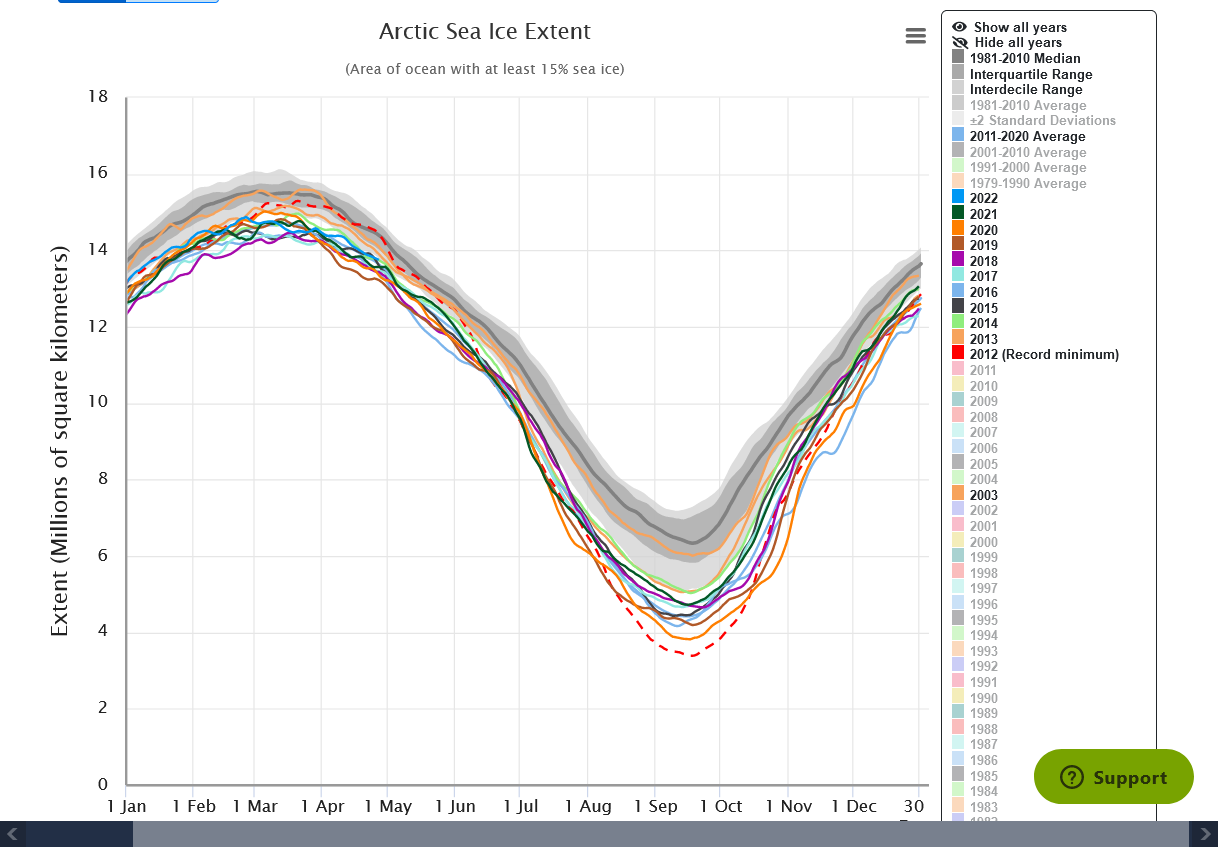 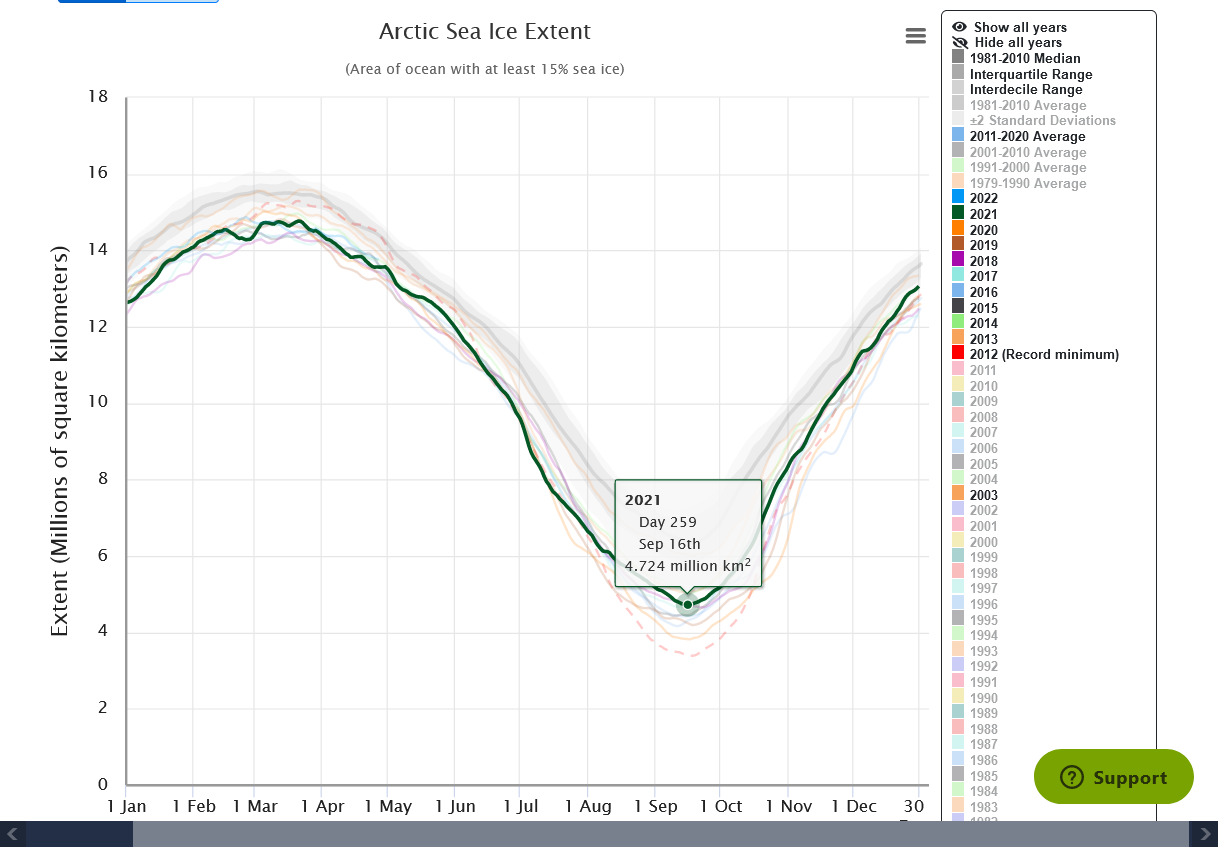 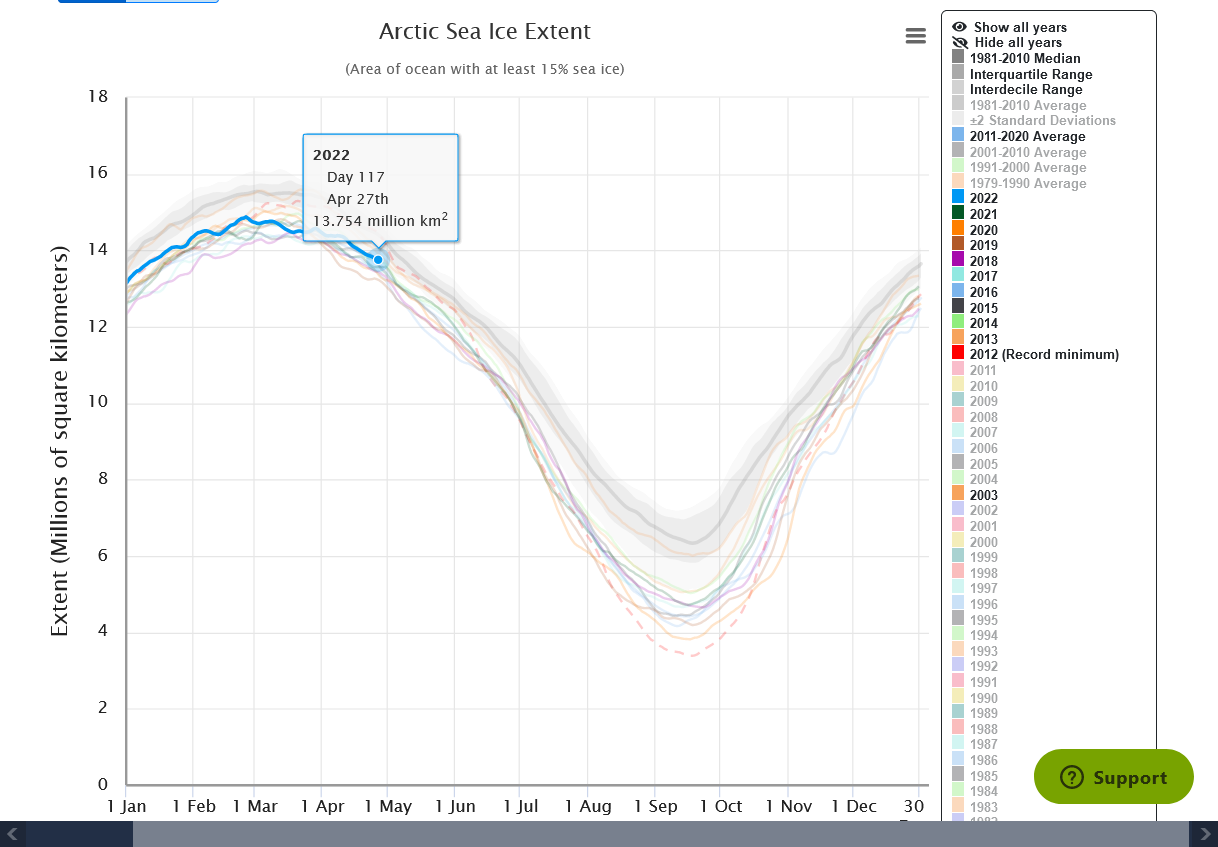 What does this mean?

The biggest takeaway is that the death spiral of  accelerating Arctic Sea Ice loss is complete DISinfomation as part of the FAKE climate crisis, trying to scare us.

Please note that I’m only commenting on the last 10 years and not predicting the end of warming or the  end of ice losses.

There are dozens of  ways to expose the FAKE climate crisis based on exaggerating many current weather/climate events occurring because of  natural variation that have been happening for thousands of years. Based sometimes on outright lies, like this one in the Arctic that you can see with your own eyes.

For instance, just related to the Arctic, Al Gore predicted that Summer ice would disappear 15 years ago and the year it was supposed to happen, passed almost a decade ago.

The polar bear population has been increasing since 2005:

It was warmer in the Arctic by 2 deg. C between 5,000 to 9,000 years ago during the Holocene climate OPTIMUM and there was LESS ice then:
Just 1,000 years ago, it was as least this warm there:

The current La Nina, which is a natural weather/climate event and part of the natural -PDO is causing the drought in the West and Plains. But we hear nonstop that it's actually because of climate change from most sources. This is the complete opposite of the truth.

With the old climate and a -PDO, we likely would have had at least 4 droughts during that time

metmike: There is no limit to what they will manufacture to support the fake climate crisis!!!

As you can see from the previous links/graphs in this thread, the sea ice loss stabilized a decade ago.

Not saying it's going to all recover........just stating the authentic empirical data/observations.

Polar bear numbers have been increasing (by 30% since 2005). Just reporting the authentic polar bear science.

We've been told for decades that sea ice loss was accelerating and polar bears were threatened. Just the opposite has happened to the polar bears.

Maybe with many more polar bears, it caused the increase in polar bear sightings?

They've been telling us that the climate crisis is killing the planet too.

We must be greening it to death (-: 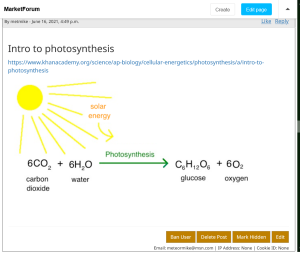 Sorry to repeat this again but it's true:

We are killing the planet for sure in other ways  but at the same time, gifting it with beneficial CO2!

Ironically, we will be killing the planet MUCH, MUCH faster with all the FAKE green (anti environmental)  energy (especially wind) that's 100 times worse than the CO2 that's greening up the planet.