That's a tough but wonderful question to make it interesting, Wayne.

I'll guess lower but political and other types of news could cause crude to double in price or drop 50%. 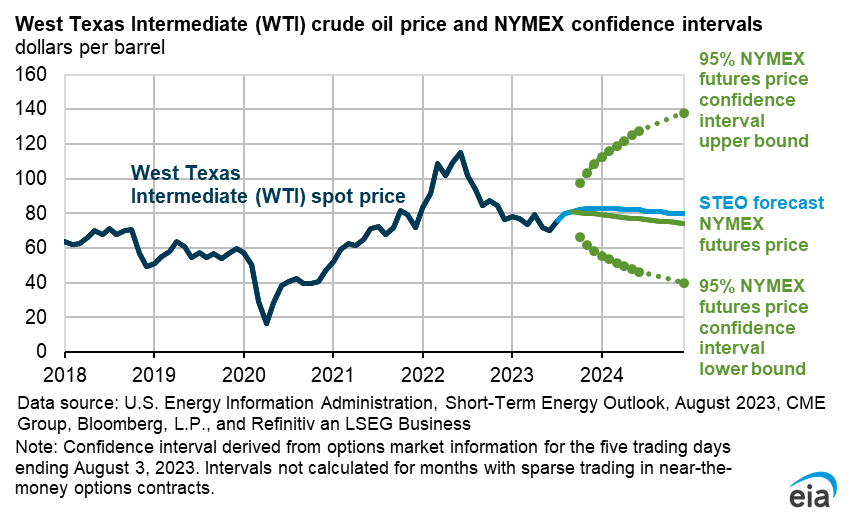 looks like the bull market in energy will continue higher, and longer.  this means inflation is not going away any time soon.  and the fed will continue to be behind the curve.

this also means public sentiment will not improve in the next few months.  this will have election implications.

The current administration trying to shut down fossil fuels, while pretending to increase them matters too.

In desparation, ahead of the election they  might adjust that (temporarily) and likely just more fake posturing to fool people but realities that are killing consumers will, by a wide margin get the most weighting vs politicians telling more bs.

The early stages of the total disaster that the war on fossil fuels is causing, could finally be enough to expose the fake climate crisis and its agenda.........but maybe not.

The war on fossil fuels is the crux of the matter.

How much damage is one side willing to inflict from its war on fossil fuels?

The more pain they cause, the less of them from that side of the political spectrum will be around After Election Day!

You can take that one to the bank!

Who can forget Biden promising to do away with fracking during the Presidential campaign?

Crude will definitely be higher by the end of the year.  Outside of a total world economic collapse or another pandemic.

And living up to those promises Jim.

Pretending he's trying to lower prices with manufactured narratives/rhetoric........while pushing for REAL agenda that does the 100% opposite to fossil fuel prices in the US and IS going to have that intentional affect with 100% certainty.

I definitely expect crude to be below 100 by year end.  In fact below 90.  War premium will dissipate, high prices will lessen demand, and, without being political, the dems will try anything to negate current polls and "allow" more actual drilling.

(Why anyone in Texas, Oklahoma, Kansas, Wyoming, the Dakotas, Montana would vote to continue the ruination of their economies?)

The transition to electric must be a gradual allowing BUSINESS, not government to control the agenda.  When technology, not artificial 'controls', determines the economics of transportation, we all will be better served.  Currently we are being disserved by our politicians.  Too much disruption.

Great to hear from ya tjc! And good thoughts too!