I'm curious. Are there any professional (i.e., matches are scripted) wrestling fans here?

yes, my boys and I used to watch quite a bit. Yes it was set up but was quite a show to see. Undertaker, Hulk, Sting, Ultimate warrior, the the Rock and many others back to Dick the Bruiser, Cowboy bob Ellis, the Sheek, Bo Bo Brazil back in the day

Never been a fan,  but back in the late 80's I worked with a  guy from Alabama who was a former "pro-wrestler", also a Baptist Minister.    Quite a resume;   a pretty decent computer programmer, a pro-wrestler and a baptist minister..  Out of the blue, offered to help me set up some railroad ties in my yard as part of a land scaping project.   Big Guy,  Strong guy.

Lots of inteesting stories from him  :-)

My grand kids are really into it.

I started dating this girl in 8th grade for several years and her dad was obsessed with it and followed local HUGE star, Dick the Bruiser(his impressive story is below). We were in Detroit of course.

Even as a kid, I knew it was blatantly staged/fake and her Dad got furious with me when I insisted that. He never missed a show and would get wound up and cheer loudly in their living room when it was on.

Honestly, at the time, I was way more amazed that adults could actually believe this obvious acting and her dad was the entertainment.

Later on, I began to enjoy the showmanship and athletics of the performances and really came to love Hulk Hogan a great deal because of his persona and positive messages. 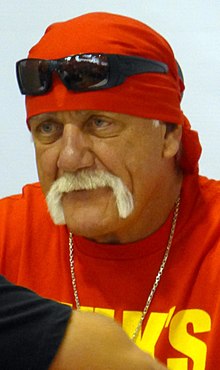 Terry Eugene Bollea (/bəˈleɪə/; born August 11, 1953), better known by his ring name Hulk Hogan, is an American retired professional wrestler and television personality. He is widely regarded as the most recognized wrestling star worldwide and the most popular wrestler of the 1980s.[8]

I just read that Dick the Bruiser died from a ruptured blood vessel while weightlifting.

As a competitive power lifter and body builder, I appreciated the hard work they put into carving out those powerful bodies.

If I'd been granted one wish when I was 18, it would have been to have the genetics of most of those huge guys, or Arnold/professional body builders.

Though much of it is/was scripted, the athletics/strength and serious risk for injuries are/were a 100% reality.

Wonderful entertainment and acting if you like that sort of thing.

"yes, my boys and I used to watch quite a bit. Yes it was set up but was quite a show to see. Undertaker, Hulk, Sting, Ultimate warrior, the the Rock and many others back to Dick the Bruiser, Cowboy bob Ellis, the Sheek, Bo Bo Brazil back in the day"

1. Did you know that Sting, after being inactive for a good number of years, has been active again for about the last two years? He's easily the fittest active 63 year old wrestler I'm aware of. He's a manager/mentor but also an occasional tag team partner. When he wrestles, he still gets into it, including some high flying moves that could risk injury to himself if he wa half his age! I've been quite impressed!

2. Jake the Snake has also returned though only as a manager as he's nowhere near the great shape of Sting.

3. I think Undertaker is still active and has a huge following though he's not a frequent wrestler.

Interesting story. Thanks for posting that. Can you remember this Alabama wrestler's name?

"Later on, I began to enjoy the showmanship and athletics of the performances and really came to love Hulk Hogan a great deal because of his persona and positive messages."

I agree about Hogan's great positive messages, especially for kids! I followed him closely in the 1980s. Also, I agree that despite the marches being scripted, they still get hurt and take huge physical risks. In addition, I love watching the high flyers with their acrobatic style. I know of one who can literally walk on the ropes! Also, many of the wrestlers use their own creativity in creating/shaping their character and writing the scripts for their interviews/self promotions though management has to approve in many cases.

Did any of you have a favorite announcer or announcing team? If so, who?

I'm shocked to see how many announcers there were Larry!

I liked Jesse Ventura and Vince McMahon a great deal.

This is somebody else's top 10:

Ranking Every Major Commentator In Wrestling From Worst To Best

My favorites: Gordon Solie, especially with Les Thatcher doing color commentary and Gorilla Monsoon with either Jesse the Body Ventura or Bobby the Brain Heenan doing commentary. Also, Lord Alfred Hayes, also on WWF, doing color was funny because of his emphasis on using very proper English for commentary on what really amounts to silliness. When I say "silliness", I mean that in a good way because a lot of the appeal of pro wrestling is that the scripting makes it funny.

The first announcer I can barely remember as a little kid was Ed Capral.

Here's a very moving story of John Cena, a very popular wrestler and actor, who traveled to Amsterdam to meet a Ukrainian kid with Down's Syndrome. John is this kid's favorite wrestler. His sudden happiness to be surprised by John is priceless and it made me tear up. This kid doesn't understand why he and his family had to leave Ukraine:

My grandkids used to talk about John Cena all the time.

This is a wonderful thread featuring you sharing an avid interest in something that a person like me is learning about in this thread.