The West Virginia centrist and Senate Majority Leader Chuck Schumer struck agreement on a party-line bill that almost everyone in Washington had given up on.

The Manchin-Schumer deal includes roughly $370 billion in energy and climate spending, $300 billion in deficit reduction, three years of subsidies for Affordable Care Act premiums, prescription drug reform and significant tax changes. Manchin said the bill was at one point “bigger than that” but that’s where the two Democrats settled.

Manchin revives climate deal: What’s in the $369B bill

Schumer (D-N.Y.) plans to attach the clean energy and tax deal announced yesterday to an existing agreement on drug pricing and health care and hold a vote on the reconciliation bill next week.

First, it will have to clear the Senate parliamentarian, an arduous process that determines whether each provision fits the strict budget rules governing reconciliation. Then, the bill will be subject to a lengthy amendment procedure in the Senate known as “vote-a-rama.”

The deal includes a prodigious set of tax incentives for renewables, hydrogen and nuclear, as well as credits for clean vehicles. Manchin spent months trying to knock electric vehicle provisions out of negotiations, but the final deal offers thousands in incentives for the purchase of EVs and other types of commercial clean vehicles.

In a concession to Manchin’s desire to keep fossil fuels afloat, the bill would mandate offshore oil and gas lease sales in the Gulf of Mexico and off the coast of Alaska.

Manchin and Schumer also agreed to advance permitting reform in a separate bill this fall. That could draw support from Democrats, as well as some Republicans, who have long been interested in cutting down permitting times for clean energy and infrastructure across the board.

The idea is to attach it to a potential government funding deal or stopgap spending measure at the end of the fiscal year, according to a person familiar with negotiations who was not authorized to speak publicly.

If passed, the energy provisions of the senators’ new bill would represent the most significant climate action in a generation.

"The bill’s main tool, its proverbial bludgeon, is a new set of tax credits that could remake the way America generates electricity.

To understand why they’re important, remember that, for the past decade, the U.S. has encouraged the growth of wind and solar through a particularly kludgy set of tax credits. For instance, a developer could get a tax break by investing in, but not producing, solar power. And if Congress wanted to increase the market share of any new zero-carbon form of power generation, it had to pass a new law creating a tax credit for that specific technology. Because of the way these tax credits were structured, they typically had to run through a large bank or investment firm, and they couldn’t be used at all by a publicly owned utility or nonprofit.

However tedious this approach was, it worked. It helped drive massive declines in the cost of wind and solar power and cut carbon pollution from the U.S. power sector 40 percent below its all-time high.

The new bill will significantly broaden the scope of these incentives, replacing them with technology-neutral tax credits that can be used for any low- or zero-carbon form of power generation. At the outset of a project, developers can make a choice: Either they can take the new investment tax credit, which will generally cover 30 percent of the cost of their project, or they can take the new production tax credit, which will pay them for every kilowatt-hour of zero-carbon electricity that they generate."

Gregory provides a tentative number for the additional storage costs that could be necessary for full electrification of the United States system, with all current fossil fuel generation replaced by wind and solar.  That number is $433 trillion.  Since the current U.S. annual GDP is about $21 trillion, you will recognize that the $433 trillion represents more than 20 times full U.S. annual GDP.  In the post I will give some reasons why Gregory may even be underestimating what the cost would ultimately prove to be."

The Schumer-Manchin bill passed by the US Senate this weekend and heading to the House erases any doubt whether Congress is serious about lowering inflation, addressing energy costs, or protecting the environment.

Ironically dubbed the Inflation Reduction Act of 2022, Schumer-Manchin will do nothing to reduce inflation. But what it will do is far worse. Schumer-Manchin will unleash the largest industrialization of U.S. open lands not seen since the damming of our western rivers. The modern “environmental” movement will finally realize its dream of transforming the mid-section of the United States, from North Dakota to Texas and Nevada to Ohio, into a massive electric generating facility powered by wind and solar.

The democrats, having appeared to be on the verge of losing on their Climate Bill, renamed the same bill the “Inflation fighting bill” because Americans are most concerned (and for good reason) with inflation.

Reality is this is the inflation CAUSING bill.
This is what these dishonest people do.
They manufacture a fake world and sell that to the people to get their counterproductive, self serving political agenda passed.

Just like them renaming the current scientific Climate Optimum for life on this planet from slight, mostly  beneficial warming and the increase in the beneficial gas, CO2 a political Climate Crisis based on junk science and DISinformation.

If what they were selling was the truth……..they wouldn’t have to name it the complete opposite of what it is/does.

NEW: Kerry wants to push back hard on energy infrastructure. Biden uses Defense Production Act for his solar agenda. Jaw dropping ignorance and hypocrisy on energy by leaders of the climate fraud.

Record rain in St. Louis is what climate change looks like?

Let’s look at some of the charts.

The first set show how far China’s dominance has increased since 2010, particularly on wafers and polysilicon, the early stages of the manufacturing stage:

And frighteningly that dominance is expected to continue growing:

China’s dominance is built on lower costs, the result of low electricity costs, lack of environmental standards and what amounts to slave labour. It is fundamentally clear that the West cannot compete on China’s terms, leaving the dilemma of strategic overdependence on China or much higher solar panel costs.

To compliment the dems at being smart with this fraudulent bill would be like complimenting the terrorists on 9-11 because they pulled off a brilliant scheme that accomplished it's goal. 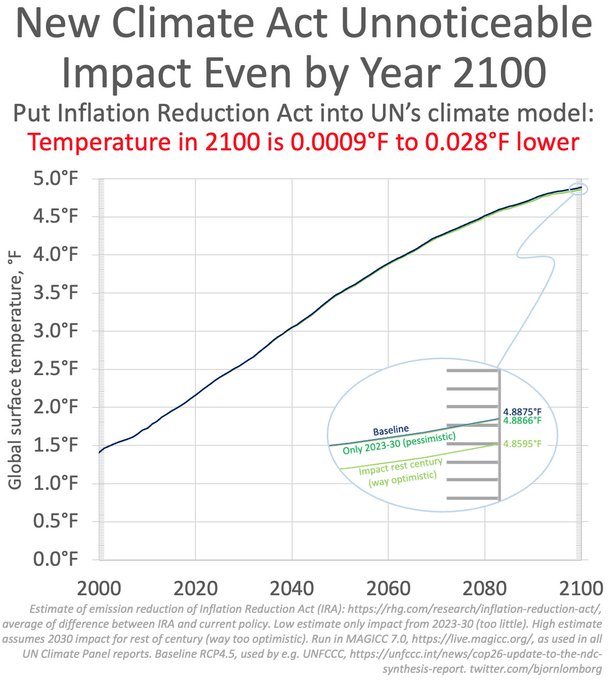 So, as seen in the figure below provided by Lomborg, we get somewhere between 0.028 and 0.0009°F reduction in temperature by 2100 for about 400 billion dollars in climate spending contained in the bill.

To put that number in perspective, according to the World Bank, the 2020 world economy in U.S. dollars was approximately $84.7 trillion. Assuming it would actually work, to have a meaningful effect on climate, the world would have to spend about half the global annual economy for the best-case scenario. If you think inflation is bad now, just wait for those sorts of numbers.

The worst-case scenario is out of reach of world wealth.

President Biden had this to say:

Now, let me be clear: This bill would be the most significant legislation in history to tackle the climate crisis and improve our energy security right away.  And it’ll give us a tool to meet the climate goals that are set — that we’ve agreed to — by cutting emissions and accelerating clean energy.

There are just no words to describe this sort of disconnect between believing you’re a climate superhero and climate reality, especially when you’re a Nobel winning economist. Kudos to WSJ and Lomborg for pointing out the climate folly of the “Inflation Reduction Act.”

Politically Connected Piggies at the Trough for ‘Inflation’ Bill

via Cartoons by Josh

Resources for the Future: Retail Electricity Rates Under the Inflation Reduction Act of 2022

Models be damned the empirical evidence is overwhelming: the more wind and solar the higher the cost:

Anyone out there who can cite one country where the wind and solar have replaced fossil fuels and reduced the retail cost of electricity?

Citizens Guide to the Climate Act

Reliable wind and solar are not cheap