Is the risk worth the reward re: Pelosi Asian trip to Japan etc and possibly Taiwan

Especially thinking of the risk vs reward, given China threat to shoot down Pelosi air  plane

Why the hell does Pelosi feel the need to test china and increase tensions between USA and china, given china thinks the USA is weak with Biden as leader, which will only increase china willingness to do some thing re: Pelosi and the USA

Great to see you Wayne and wonderful topic!

Pelosi expected to visit Taiwan, Taiwanese and US officials say

US House Speaker Nancy Pelosi is expected to visit Taiwan as part of her tour of Asia, according to a senior Taiwanese government official and a US official, despite warnings from Biden administration officials, who are worried about China's response to such a high-profile visit.

The stop -- the first for a US House speaker in 25 years -- is not currently on Pelosi's public itinerary and comes at a time when US-China relations are already at a low point.

metmike: It makes no sense for Pelosi to visit Taiwan.  A top priority for a trip to Asia would be to  strengthen the relationship with China. China matters more than any country in the world so how is it that she would actually enrage them with a visit to Taiwan?

If she would actually do that, then it would be one of the most counter productive moves by a US politician in history.

There has to be much more to it. My guess is that they really want this narrative out there about these extremely negative tensions with China BEFORE the trip.

Then, Pelosi will go out there, meet with China and the news will come out that she patched up the relationship and now China and the US are more friendly. Pelosi will be a hero and we should vote for dems this Fall!

That's the only thing that makes any sense.

I'm all for strengthening relations with China, regardless of any ulterior political motives.

As far as ticking off/provoking China by violating their warnings about Taiwan.

Again if this happens, it will be intentional(with China in on it) l to set the stage for Pelosi ending up saving the day at the end  and be more of a publicity stunt.

Can you imagine China shooting down a plane with Pelosi in it?

Yeah, so can both the US and China political leaders.........so it will never happen but the scary perception by the rest of us that don't know the REAL plan and think that  it COULD happen is setting the plate here.

"Especially thinking of the risk vs reward, given China threat to shoot down Pelosi air  plane"

This is fake news. China didn't threaten to shoot down Pelosi's plane:

Hu Xijing who writes for state run Global News said that if Pelosi plane has fighter escorts then if obstruction, etc does not deter pelosi, then shoot her plane down

Who can decide if fake news???

I doubt I  have quoted HU exactly, but I tried to give the forum the jist about what I read about HU and state run Global News

Shoot the plane down if obstruction does not work

From the Newsweek article:

"A strongly worded Friday tweet from a Chinese Communist Party-linked tabloid newspaper columnist prompted some to say that China had directly threatened to shoot down Pelosi's plane if the visit does occur."

This isn't China threatening to shoot down her plane.

Now it makes much more sense.

China threatening to shoot down Pelosi's plane and Pelosi going forward with the trip that violated that warning anyway would be insane.

In a banned tweet, a top state-media commentator reportedly said China could 'forcibly dispel Pelosi's plane' and shoot it down if it flies to Taiwan

China Threatens to Shoot Down Pelosi’s Flight, Pompeo Urges Her Not to Cancel Taiwan

Since this is a forum of american posters, anything Canadian falls on deaf ears

My understanding is she has no reason to go  on this trip at tax payer expense. I assume tax payers are footing the bill if reports of a fighter escort is true

My understanding is she has no authority to engage in treaty talks, or any thing else

Is this an example of people in power do what they want to do??? and ignore what they don't want to deal with

I will be interested to see if she gets the red carpet treatment when landing in any country. Also any remarks she may make in any country, that isn't just fluff.

Golly, wouldn't that make her feel even more important if foreign people take her seriously

Personally, I worry about any remarks she may make as I truly think we are as close to nuclear war as any time in history, including Cuba

Sadly Biden nor his handlers are not JFK

You just got me thinking.

I've said for a long time that Biden might not make it to the end of this term.

His cerebral functioning is greatly faltering. He is greatly struggling to perform basic presidential functions and he's not close to thru half of his term.

Add to that, the fact the Rs will likely win both houses in November(a big reason is Biden) and you can bet that they will open an investigation into Joe and his connection to Hunter.

If the truth comes out...........Joe is in huge trouble and I believe the House WILL impeach him but the Senate needs 2/3ds and it won't happen.

Joe knows exactly what he did and if that gets out, which it will in the investigation........his career and legacy will be destroyed.

The ONLY way to avoid all  that is to resign for health reasons. Every person on the planet will accept the resignation for health reasons because his behavior in front of the camera every day in office is evidence of his profound mental decline since he was VP.

That means the VP Harris would be president. She might be in her prime but her prime lacks the leadership and qualifications/experience that Biden has been is unable to consisting apply because of his deteriorating thinking/communicating skills.

Dems have to be really nervous about Harris as president. 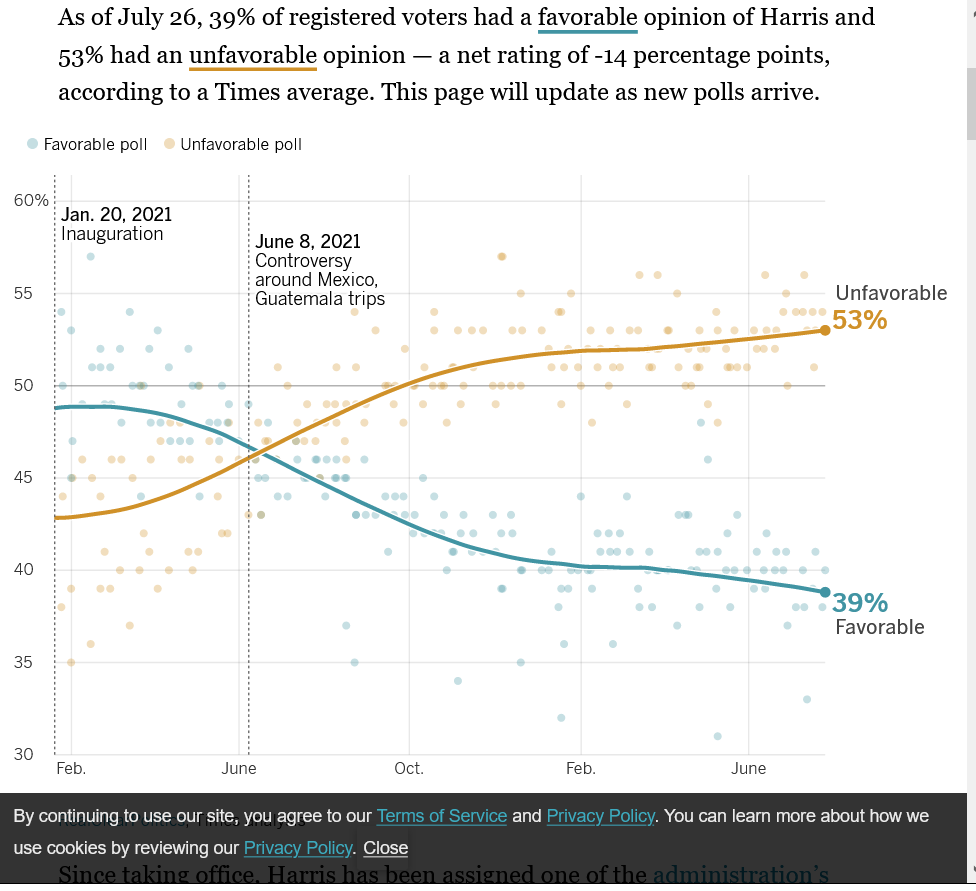 The dems are in deep White House leadership doo doo. Having a VP with an already unfavorable opinion by the majority of Americans taking over a job that is over her job skills is a recipe for bad things.

I don't think that this will happen but if both the President and VP both become unable to continue at the same time (Harris could come up with an excuse?), then the speaker, Nancy Pelosi becomes president.

If Biden resigns and Harris is the VP.............Pelosi does NOT become Vice President!

Harris would be able to appoint whoever she wanted as the new VP.

Regardless, the current 2 at the top are on some shaky ground and if both would be unable at the same time, THEN Pelosi becomes president.

Usually that seems almost impossible but I think chances of Joe finishing this term are well under 50% right now........so it's possible.

One wonders if this trip to Taiwan is trying to boost Pelosi's credibility as somebody that meets with key world leadership and is qualified to lead as a president.

It could be nothing more than her locking in votes for the upcoming election because her district has a very nigh number of Asian Americans or using her position to provide democratic credibility related to relations in the Pacific/Asian relations arena.

She does have alot of experience and skill in that area:

This trip by Pelosi is extremely confusing.  One would think that the purpose is to improve relations with China.

It would seem to  make no sense to travel abroad to a foreign land as a representative of your country to provoke the country that you're visiting.

It seems like the White House and Pelosi(from the same party) are not on the same page here, which is another odd dynamic, if true.

US policy toward Taiwan is all about “strategic ambiguity.” That means every trip and remark has to be just right. 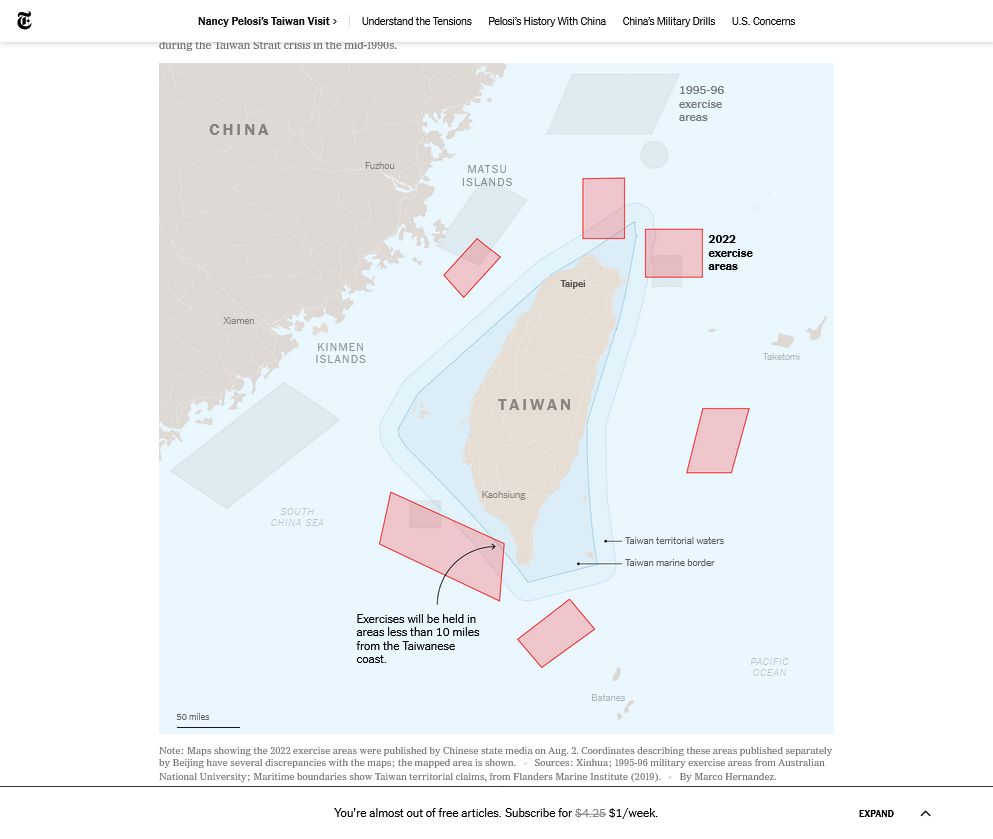 metmike: The message doesn't get much more blatantly obvious than this.

The Biden administration has built an economic and diplomatic strategy in Asia to counter China, assuring friendly countries that the U.S. is in the region for the long haul.

metmike: What in the heck is going on here???

Chinese Threat: Renounce Taiwan, or the Global Climate Gets It

So what does lack of cooperation mean?

The exact same thing as cooperation on this graph.

COP26 aims to banish coal. Asia is building hundreds of power plants to burn it
https://www.reuters.com/business/energy/cop26-aims-banish-coal-asia-is-building-hundreds-power-plants-burn-it-2021-10-29/