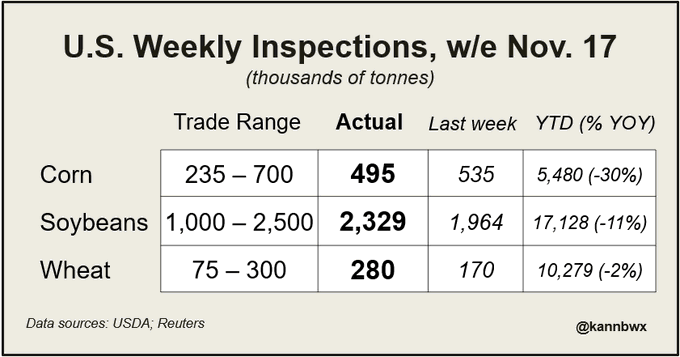 The new numbers for the week ended Nov. 10 still aren't great, but at least they weren't as low as the original data showed:

Here's what the cumulative charts look like for #corn & #soybeans now (through Nov. 17): 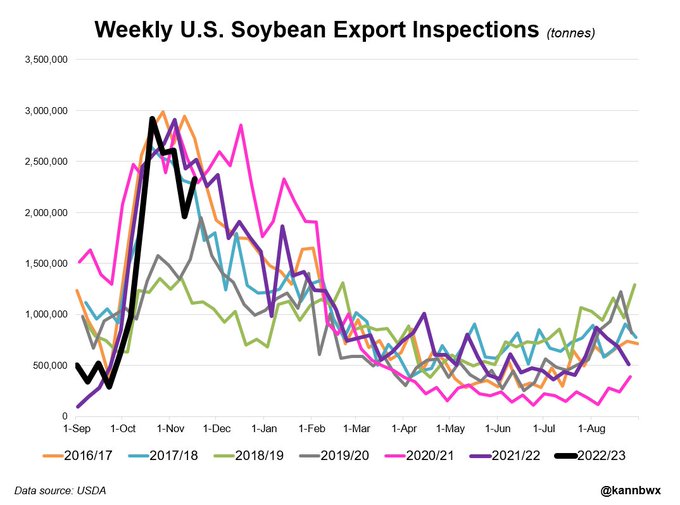 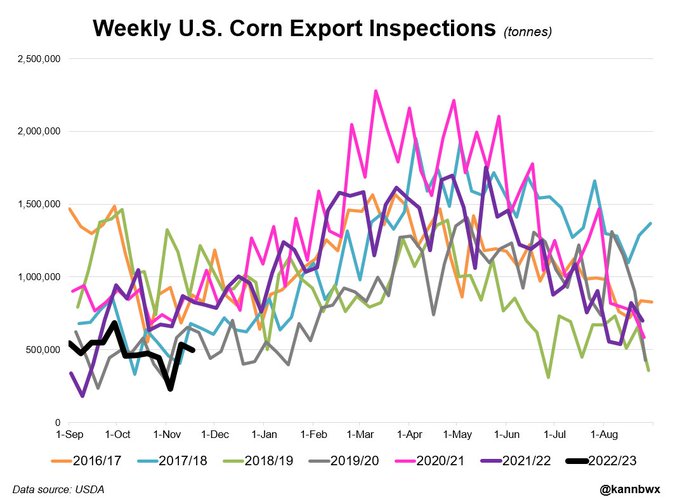 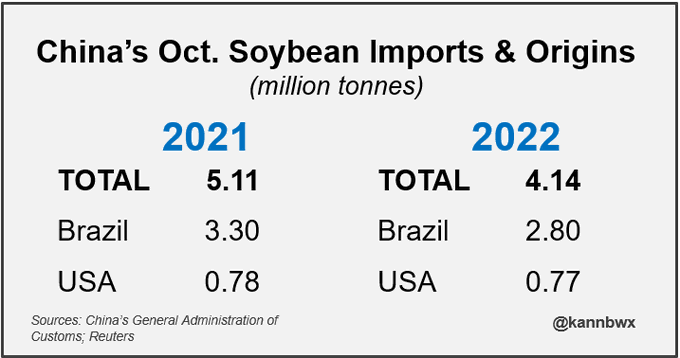 #Argentina generated $8.2B of revenue in Sept by encouraging producer sales/exports of #soybeans with a special currency exchange rate. The govt now needs more cash, so a similar move may be under consideration again. Farmer soy sales for 21/22 are down slightly YOY at 72%. 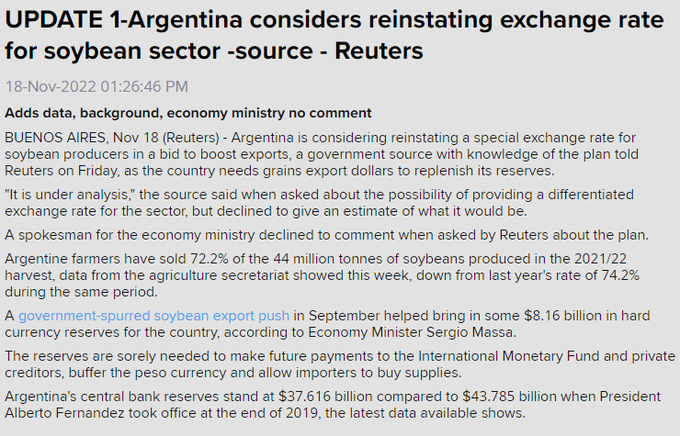 Snapshot of the current flow of #soybeans around the world. About 75% of exported beans head to Asia annually, the majority of those to #China. USA is the main supplier right now, though there are some South American beans shipping out, too. 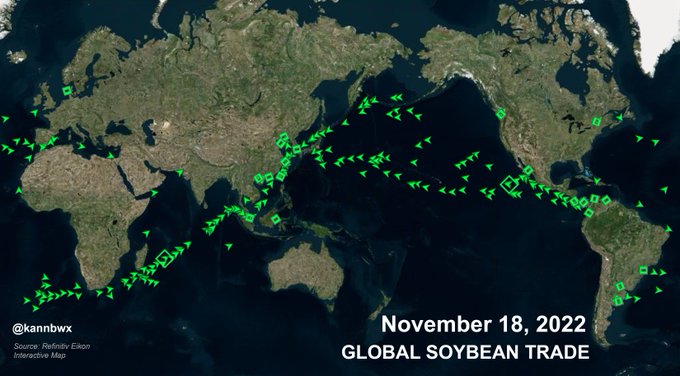 Outside of some dry weather in Argentina, there really is nothing exceptional about grain fundamentals.  Demand is meh....exports are meh.

IMO, if I am a buyer, I'm holding back on purchases.  SA crop is off to a pretty decent start.  At the least it already looks like it will be bigger than last years.  And demand is slow.  Patience and a buyer could buy it $2-3 cheaper.

SA crop is off to a pretty decent start.

If you don't count Argentina as being part of South America.

Dought in Argentina..NOT in Brazil

Only 31% of the crop is in the ground in Argentina.  There are months to go.

Only 31% of the crop is in the ground in Argentina.  There are months to go.

You are doing your best to convince yourself that everything is fine in Argentina, Jim. 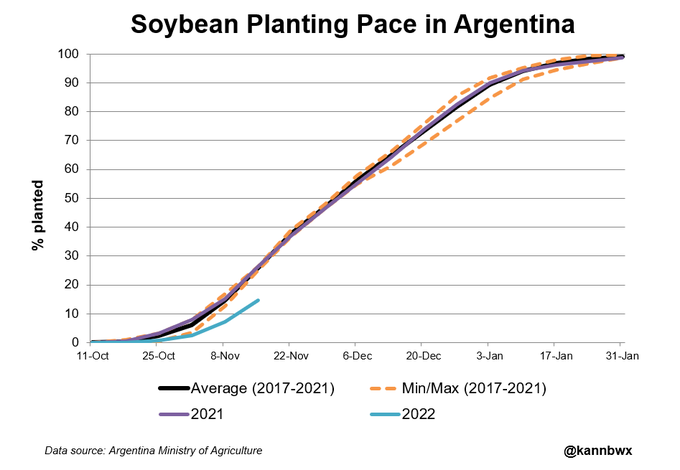 Note the blue line above Jim. Slowest planting on record by an extremely wide margin and with record high prices. What would explain that?

It's so dry that it's too dry to plant anything in some places of Argentina right now. Farmers are waiting for better rains.

Because the planting is extremely far behind in Argentina does NOT mean the unplanted portion still has the entire growing season to go.

It means the odds are going up of X amount of soybeans NEVER getting planted in Argentina.

This article was over a month ago but makes some solid points.

NAPERVILLE, Ill., Oct 4 (Reuters) - Argentina’s grain belt is amid its driest calendar year in nearly a decade and forecasts are keeping that trend around for the next three months, when the country’s corn and soybeans may need rain the most.

Although the sensitive yield-formation periods lie in the early months of 2023, harvest results have a slightly higher correlation with rainfall between October and December, when corn and soybean sowing is under way.

According to its agriculture ministry, Argentina’s corn crop was 12% planted as of last Thursday, the slowest for the date in at least five years. But past data suggests corn yields are not negatively affected by planting delays, which are never historically large, anyway.

The same is true for soybean yields and planting pace, which will not accelerate until November. However, dryness during the sowing period can reduce overall area, as was likely the case for the current Argentine wheat crop.

Farmers in Argentina are expected to favor planting soybeans over corn this year due to better profit potential, but well below normal soil moisture and a dry outlook could threaten those plans.

Brazil's production is much greater than Argentina and the weather in Brazil is much more important but we shouldn't overlook that this is because Brazil is massive and the production is really spread out to an area, something like 4-5 times the area growing beans in Argentina.

So the Argentina production is more concentrated in a much smaller area which is exactly where the severe drought is.

This means that the drought in that location will be high impact over extremely high production land and production losses will be greater than what Brazil would see over the same amount of land in drought. 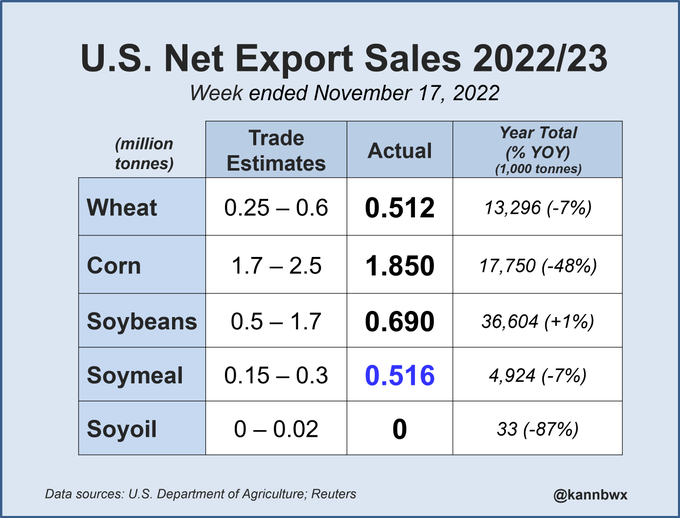