Kari Lake Says If She's Not Made Arizona Governor, America Will 'Turn Into A Venezuela'

We live in a world where people just manufacture whatever reality they want to believe and what they think they can get other people to believe, no matter how absurd.........then double, triple and quadruple down on it.

Life on our planet is experiencing the best weather/climate and CO2 levels since humans have existed.... a crystal clear climate optimum by scientific, biological and meteorological standards.

Yet the world has been convinced to believe that, instead it's the exact opposite....... a climate crisis and that we're killing the planet(that's greening up).

So if you think Kari Lake is completely bonkers.......you're right but if you're also convinced that we're having a climate crisis, despite all the completely failed alarmist predictions for over 3 decades(and the planet greening up from the best weather/climate/CO2 since humans have existed).......the only thing that you have on those that believe in Kari Lake is that there's a billion more of you being bamboozled by a fraudulent, manufactured reality.

US Climate Is Getting Less Extreme, Not More

IMO ~ SHE CAN GO JUMP IN A LAKE & STAY THERE! SHE IS WICKED

in case you have not caught all the details of the lake vs hobbes situation.  hobbes was secretary of state.  so hobbes was the person in charge of the voting apparatus.  there happened to be a big problem with voting machines in a heavily republican area.  so when pubs went to vote, machines did not work, and there were not enough ballots.  there were No problems in areas that favored hobbes.  even if the problems were completely innocent,  it can look very suspicious.  (then its up to a judge to decide if anything improper happened).

of course it is an exaggeration to say america is going to be venezuela.  but... yes, we will end up like argentina within a generation.  (if our country lasts that long).

BEAR ~ I BELIEVE THERE WAS A LOT OF "MISHAPS" & PROBABLY ON PURPOSE.

MY ISSUE WITH HER IS>>>>>>>  MOST PEOPLE SHOW THEIR TRUE COLORS, WHILE UNDER STRESS. IMO.  ON ELECTION DAY, SHE SHOWED HER TRUE COLOR, IN ONE SENTENCE, BEFORE THE POLLS CLOSED.

there were No problems in areas that favored hobbes.

You might want to fact check what you think happened based on this false narrative being repeated so many times by republican sources..... let me assist you.

AP’S ASSESSMENT: False. Voting centers across Maricopa County reported printing issues that stopped some ballots from being counted onsite, including in Democrat-leaning areas, like downtown Phoenix and Tempe, according to the Maricopa County Elections Department.

Trump wrote on Truth Social Tuesday in reference to the voting snag, “Only Republican areas? WOW!”

Such claims also spread independently on social media, with one Instagram user sharing an image Wednesday that featured the text, “Funny how in Arizona the voting machines ‘stopped working’ in predominantly REPUBLICAN areas.”

But that is not the case. Voting centers in both liberal and conservative parts of Maricopa County were impacted by the printing issues, according to a list of locations provided to The Associated Press by Megan Gilbertson, a spokesperson for the Maricopa County Elections Department.

Though printers at 70 polling locations in Maricopa County malfunctioned, Gilbertson said those voters were able to cast votes at any other location.

"Voters could choose from any of the 223 sites on Election Day, rather than being assigned to one polling location within their precinct," Gilbertson said.

At a Nov. 28 board supervisors meeting, Maricopa County Election Director Scott Jarrett said the printing issue was not specific to any region or political party. The issue occurred in locations with a specific type of printer, the Oki B432.

A Washington Post analysis of election data found that about 37% of registered voters in the affected precincts were Republican. This percentage is virtually the same as the percentage of Republicans countywide, according to the analysis.

Meanwhile, the Post found that heavily Democratic precincts were affected by printer issues as well, including in east and south Phoenix, where the share of Democrats is about 40 percentage points higher than that of Republicans.

This claim has been debunked by Reuters and the Associated Press as well.

Based on our research, we rate PARTLY FALSE the claim that Maricopa County posted a GOP voter "heat map," then 84% of voting machine problems were in GOP areas. The agency did post a GOP heat map, but this article is misleading because the map was posted alongside maps showing Democratic turnout and total voter turnout. And the 84% figure is flat wrong: A Washington Post analysis found 37% of voters in the affected precincts were registered as Republicans. 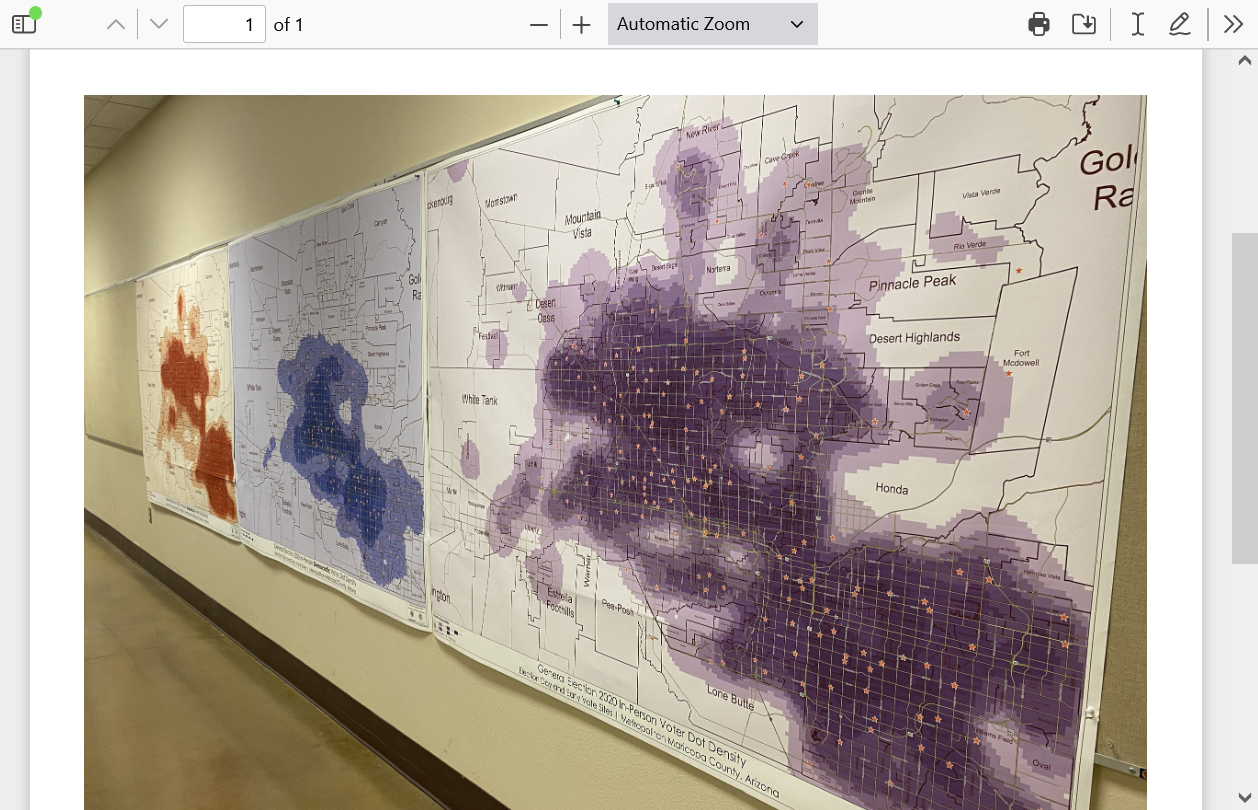 BEAR... I GOT WALLY EYED LOOKIN' FOR THAT VIDEO.  LOL

THIS IS WHAT WENT ON >>>>>>  AS LAKE WAS WALKING DOWN THE STREET, SOME REPORTER TOLD HER THAT ON A PHONE SURVEY, HOBBS HAD 65% (?) SUPPORT IN A RED AREA.  LAKE SAID: "WELL, THAT AREA IS JUST ALL OLD PEOPLE THAT STILL USE LANDLINES!!" (THAT'S AS CLOSE TO AN EXACT QUOTE, AS I CAN GET.)