Reduced my position in oil on Friday and think I may go net short on Sunday night. Anyone else seeing a nice oil dump coming. Maybe $60 even maybe $58?

The more I look at Gold and Silver the more I think they are going to dump also. I did a decent amount of selling on Friday and plan on selling more on Sunday night. Oil I feel confident about so I am going to have a net short position in oil (I am long a Dec 2020 and Dec 2021 mini WTIC. No need to sell them, I will just sell a May WTIC, or perhaps a few May's) With Gold and Silver it can be more tricky. Goldman likes to fake everyone out, and they move so erratically especially compared to oil, imo. Just typing thoughts. good luck trading.

MOSCOW (Reuters) - Russia and OPEC may decide to boost production to fight for market share with the United States but this would push oil prices as low as $40 per barrel, TASS news agency сited Russia's Finance Minister Anton Siluanov as saying on Saturday.

"There is a dilemma. What should we do with OPEC: should we lose the market, which is being occupied by the Americans, or quit the deal?" Anton Siluanov, speaking in Washington, said, TASS reported.

"(If the deal is abandoned) the oil prices will go down, then the new investments will shrink, American output will be lower, because the production cost for shale oil is higher than for traditional output."

Siluanov said oil prices could drop to $40 per barrel or even less for up to one year.

The Price of Crude Oil is Rising: Supply Constraints Likely to Emerge

Crude oil has been on a tear since the beginning of 2019. Like most assets, crude oil was sold during the last quarter of 2018, when a fit of furious liquidation hit just about every market on earth. That trend has reversed, with WTI up around 40% so far in 2019, and Brent up more than 30%.

Unlike gains in global equities, rising oil prices are starting to hurt consumers and businesses. People have to pay for products which are refined from crude oil, which puts pressure on just about everyone in the economy.

On what do you base your opinion that Oil has topped?

Now back to short term, I am looking at Movements by Goldman Sachs and open interest on the daily, along with the RSI on 1 hour and daily. Also use moving averages on both time frames with also the weekly chart. On the weekly chart we went through the 50 week ma without a pause and I think that we need to go back down below it and maybe touch the lows of the week that we went through it. the lows of that week were around $60. That is another $3.50 to go for a total of $4.70  that much down side seems worth writing about and calling it a short term top. Maybe even $58ish. Not looking for lower then $58.

I guess you have to ask yourself, why would Russia and OPEC commit financial suicide to save market share?  SA makes far more money selling 9 MBBls of oil at $80 than they would selling 10 MBBls at $40.

I think any talk of increasing output is just jawboning to keep the price from exploding.  To that point, we haven't even seen any impact yet in US oil storage yet.  Despite the noise that Russia is making, I'll be surprised if we see anything done by the end of the year.  I think it's going to be the new normal with OPEC sticking around 30mbbls a day.

I totally agree that it is just jaw boning, but the question I have for you, do you really think that this jaw boning is't all part of a Goldman plan and that they are reducing longs, while at the same time having bla bla comments come out. The new media is all controlled so we the people would not know or read about it unless it was all preapproved. I follow Goldman Sack and they are creating  all the hoopla.

Anything Goldman says has to be taken with a grain of salt.  They are protecting their own interests of course.  Until OPEC says they are increasing output, I would stay long.  They aren't going to be fooled by Trump again.  He pulled a fast one on them last time with Iran oil waivers.  I'm sure that couldn't have made them happy.

Oil is much stronger then I was anticipated and I am flat. >Long gold and silver from this morning. happy trading.

I guessing OPEC is shooting for $80 Brent and until they say otherwise.....

All the energies have historically been very strong at this time of year!

For the first time this year I am totally flat WTIC. While I feel confident that the lows of this past week will be taken out, I also am sensing we may have a nice run to $66 first before heading back down. Will be interesting to see the COT report. I hope with the markets closed it still comes out today.

It does look like we had a nice run to $66 first, but the dump I was looking for is going on. Not buying yet. Need to get closer to $60. 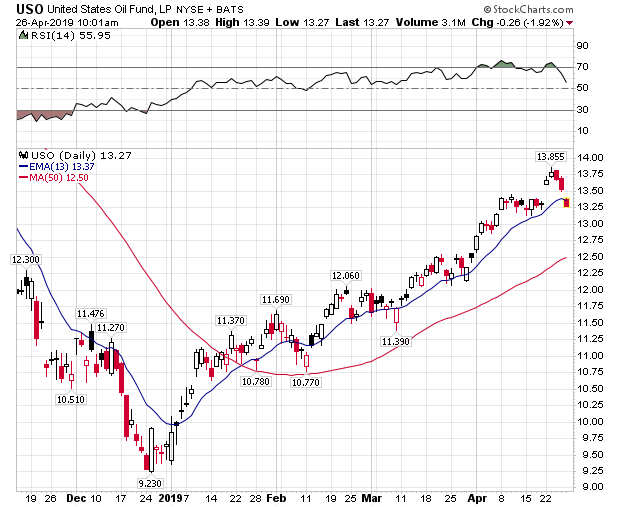 Oil definitely looks lower this week. Ready to buy once all the longs bail out and sell in panic.

Keep us posted on your thoughts and positions Richard.

..... I was not a position to double down on my strategy here but getting long 32  crude at.

Thelast,true  free Bastion of capitalism is Among Us

A huge addition to storage yesterday.

Let us know how it goes.

With being too narcissistic, "Nice Call".