Back to Index Reply to Topic Like This Topic
Trump threatens to dump illegals in sanctuary cities
14 responses | 0 likes
Started by metmike - April 13, 2019, 11:57 a.m.

Against this backdrop, a number of mostly Democrat-run cities have enacted laws preventing their police forces from cooperating with federal immigration authorities and agencies like Immigration and Customs Enforcement (ICE). Under Governor Jerry Brown, California has gone as far as declaring itself a ‘Sanctuary State,’ and refused to honor thousands of ICE requests to turn over illegal aliens in 2016-2017, including 3,400 charged with murder, sexual assault, kidnapping, aggravated assault, and other serious offenses.

For some reason, however, the Democrats in charge of these sanctuary jurisdictions expressed outrage at Trump’s proposal. San Francisco District Attorney George Gascon argued that illegal immigrants are “less likely” to commit crime than the US-born population, before calling the proposal “an all-time low for American discourse.”

Speaking of Trump and Dump:

This was my favorite:

"Activists cannot wait any longer for Democratic leaders in the Congress to lead in the direction that Democrats across America desire."

They claim that Trump has to go if we are going to save the planet(from the manufactured climate crisis which, based on authentic science in the real world, is a.........climate optimum)

"The Intergovernmental Panel on Climate Change (IPCC), the United Nations body that is responsible for assessing science related to climate change, issued its “Special Report on Global Warming of 1.5°C” in October 2018. The U.K. newspaper The Guardian gave us the bottom line as a headline: “We Have Twelve years to Limit Climate Change Catastrophe, Warns U.N.” Debra Roberts, the co-chair of the panel’s working group on impacts, described the report as “a line in the sand and what it says to our species is that this is the moment and we must act now. This is the largest clarion bell from the science community and I hope it mobilizes people and dents the mood of complacency.”

Clarion call. Check. We have twelve years in which to begin to take meaningful action to save the planet. Luckily, we know how to do it.

“We have presented governments with pretty hard choices,” says Jim Skea, a co-chair of the U.N. panel’s working group on mitigation. “We have pointed out the enormous benefits of keeping to 1.5°C, and also the unprecedented shift in energy systems and transport that would be needed to achieve that. We show it can be done within laws of physics and chemistry.”

Can be done. Check. “Then,” says Skea, “the final tick box is political will. We cannot answer that. Only our audience can—and that is the governments that receive it.”

The government of the United States, the country with less than 5 percent of the global population that consumes roughly a quarter of the world’s fossil fuel resources, is not going to act while Donald Trump remains as President. Trump is a climate-change denier who has been labeled the “the most relentlessly anti-environmental President in modern U.S. history.” He used his latest State of the Union Address to brag about how the United States is “the number-one producer of oil and natural gas in the world.”

If we want to save the planet, Trump needs to go. Fast." 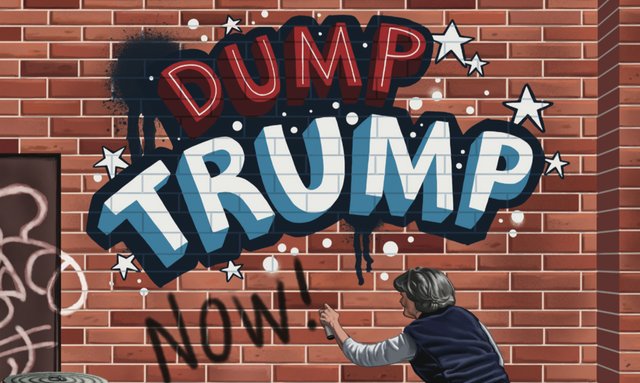 The actions proposed by the Climate Accord would do NOTHING to effect climate. They would result in a transfer of wealth from the rich to the poor countries, while greatly weakening the top economies of the world(but not China-which will continue to massively increase CO2 to at least the year 2030).

Two things to address in this thread.

1. Taking illegals to santuary citys would not be just a problem for Dems, but for the country. It would not relieve the border problem because it would be an invitation for many more caravans.

2. Pelosi will never allow an impeachment vote as long as the Senate is controlled by the Pubs.

you wrote  "..... because it would be an invitation for many more caravans."

IMHO, knowing that there are "sanctuary cities" is already a focal point for many 'caravan" members, that gives them the courage to leave their home

Hi Carl, I hope you're well

Hypocrisy is no stranger to politics, but for the left to demonize Trump, or anyone, for routing illegal immigrants to "Sanctuary Cities" takes it to a whole new level.

They have made a point of loudly proclaiming their support for illegals, offering them protection.

But,  I have to admit,  it's kinda fun watching Trump get Pelosi to denounce illegal immigrants.

Now, we just need him to start blocking any efforts to build a wall. 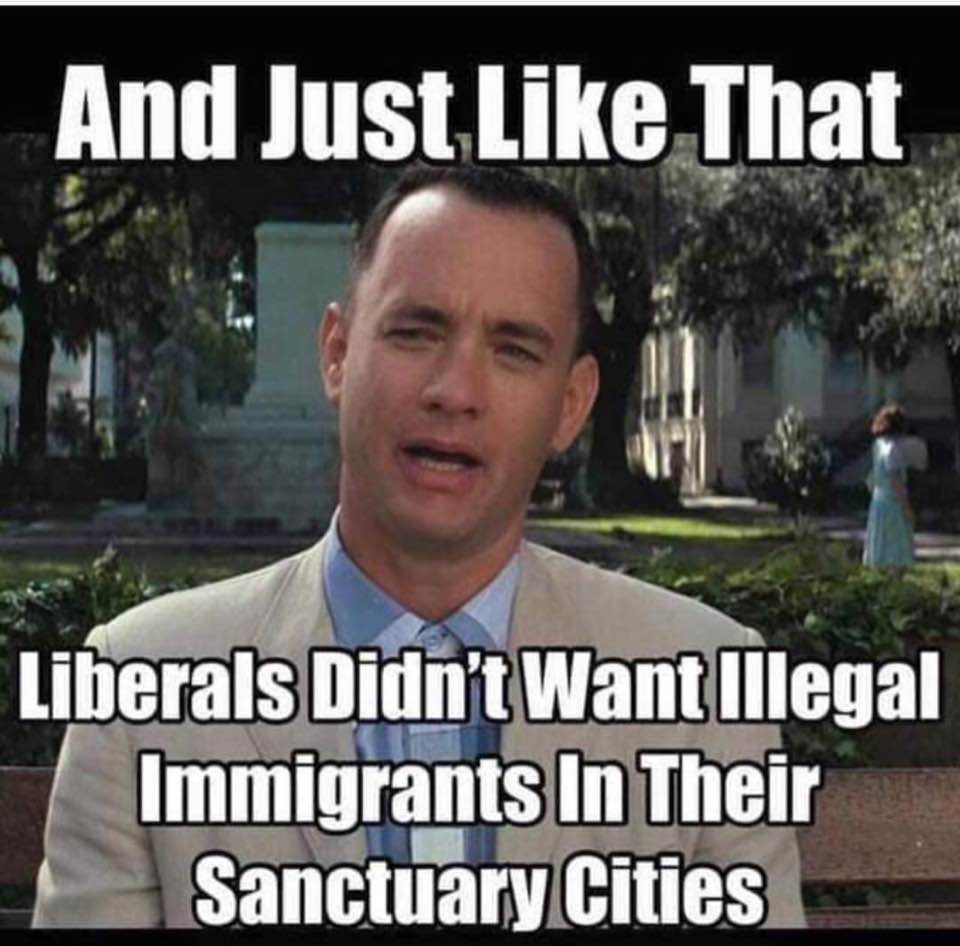 "They have made a point of loudly proclaiming their support for illegals, offering them protection."

Tim, you seem to be confused between resident illegals and aliens outside of our borders who are not illegals.

"Tim, you seem to be confused between resident illegals and aliens outside of our borders who are not illegals."

Good one Carl  :-).   But, what Trump is proposing is, instead of lodging the "immigrants/refugees/what have you" in assorted compounds near the border,  we'll just house them in Sanctuary Cities.  How can pro-illegal immigration people object?

But I do recall, you see some sort of distinction between people who are actively attempting to enter the country illegally and the people who have successfully done so. The "Resident Illegals" (I love that phrase BTW), have some sort of "rights" that the active illegal border crossers don't have.    You've used this distinction to say supporting sanctuary cities is not the same as supporting illegal immigration.

One sure fire way to keep people doing something is to tell them they won't be able to shortly. We can apply this to the immigration mess worsened by 45.

"Trump is proposing instead of lodging the "immigrants/refugees/what have you" in assorted compounds near the border,  we'll just house them in Sanctuary Cities. "

Tim, now I'm confused. Are you saying that Trump wants to build compounds at the sanctuary cities? Surely you can't mean that he wants to release thousands of illegals into our country.

"Tim, now I'm confused. Are you saying that Trump wants to build compounds at the sanctuary cities? Surely you can't mean that he wants to release thousands of illegals into our country."

I really can't say specifically just what Trump plans to do. I strongly suspect this is another of his games and we'll never see the realty/outcome.

But fortunately for Trump, the liberals were extremely cooperative, meeting his every hope and dream,  in their response. 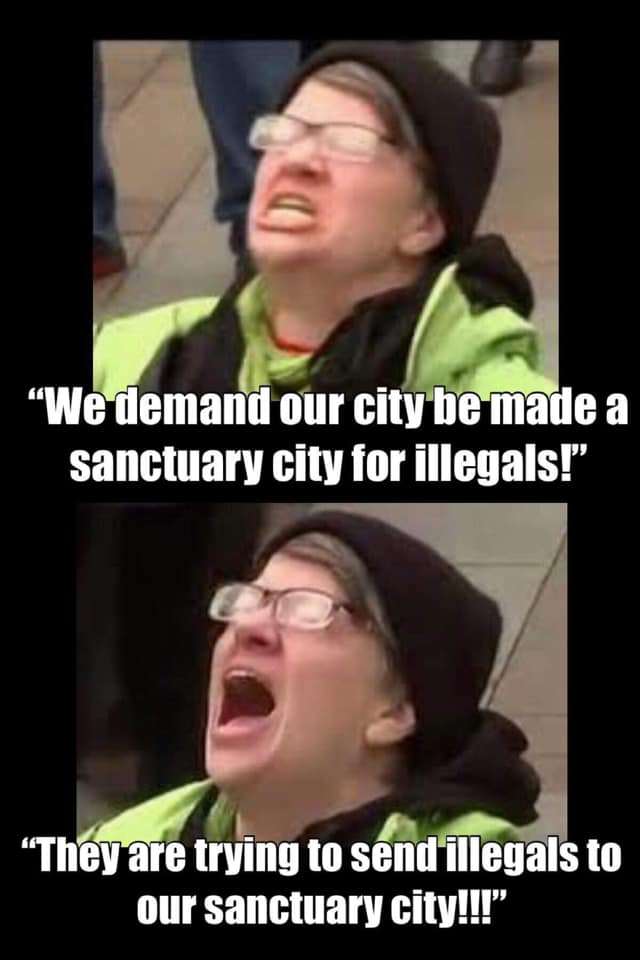 Liberals are programmed to automatically oppose anything Trump says or does. This knee-jerk anti-illegal immigrant stance is a great example. As the dems realize how it's been received/perceived by the majority, watch for a sudden change in tone today as they switch to full blown damage control.

I expect obfuscation and distraction as there really is no way to repackage "Illegal immigrants make us less safe".

Best option is to focus on what an irresponsible statement that was for a sitting POTUS.  An argument can certainly be made.

But the illegal immigrant debate has likely forever changed. Who on the left can ever take a position that it's not a problem ever again? Who can say there is no crisis at the border?

Was Chicago not the original sanctuary city

1. I think Trump was absolutely brilliant with this tactic in exposing the hypocrisy of the far left. Hypocrisy is one of my biggest pet peeves and the far left is often hypocritical when it comes to identity based politics.

2. The far left is clearly opposed to it because they oppose practically everything Trump says or does. However, the far right treated Obama similarly. Then again, the far left treated W similarly after his post 911 popularity wore off while the right didn't treat Bill too well. So, it is nothing new. However, I'd say that Obama and Trump have both been treated the worst by the other side and that is likely due to social media and the internet in general.