WHAT IS GOING ON? Ten Prominent People Killed or Murdered In Last 72 Hours! Hmmm....

I came across a really interesting video today.

I had heard about 5 of these, but I didn’t know the full list of all ten.

Here’s the short story….ten prominent people are all dead (many killed) over a 72 hour period.

It’s not immediately clear, but to have 10 prominent people like this all drop dead in a 72 hour period certainly raises the spectre of inquiry!

I’m no math expert, but I think any statistician would tell you when ten things happen like this all at the same time, the chances of it being “coincidence” are about the same as winning that $500 million lottery.

In other words, not gonna happen!

The man in the video does a great job of breaking it all down, and I’m not making any accusations or claiming I know what’s going on — neither does he.

He’s just laying out the facts and saying it doesn’t smell right.

Please watch for yourself and then I’d love to hear what you think!

Here's what I think SS:

I wouldn't have any desire to do this(like this gentleman obviously does) but would bet that if you had nothing better to do except track all those deaths every day, you could find many days, when numerous prominant people died. In fact, most days because prominent people are not immortal............they die and there isn't a death calendar that they sign up for to schedule their deaths so they occur with rhyme or reason...............because, like with many things, deaths occur with random variation.

Which is what caused these deaths.

I can't prove it with deaths but lets use coin flipping to illustrate this principle..........and your a math guy. If you flip a coin 22,356 times, you will get very close to 50% heads and 50% tails. However, during the flipping process, there will be streaks of consecutive  heads and tails that might be 10 in a row.

How many coin flips would it take to get 10 heads(or tails) in a row on average?

"A key fact in this problem is that it takes, on average, 2046 flips to achieve 10 heads in a row. Analysis of this problem is fascinating because it draws together a fascinating mix of theoretical and numerical probability along with estimates and approximations." 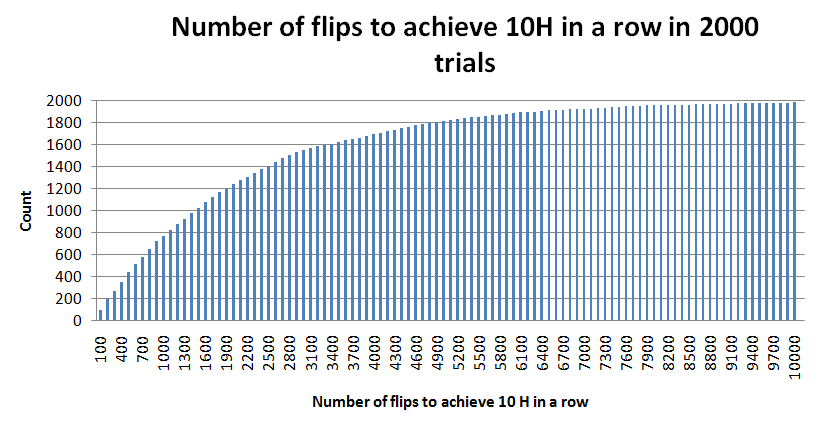 The problem above is called the Derren Brown Coin Flipping Scam.  If this guy's name is Daniel Lee, then I would refer to this as The Daniel Lee Prominent Death Scam.

- At Least 5 Mysterious Deaths In Week: Is A Nationwide 'Clean Up Job' Being Carried Out?

By Stefan Stanford - All News Pipeline - Live Free Or Die

Over the last several years dating back to the launch of ANP during the administration of Barack Obama, we have published numerous stories about clusters of mysterious deaths hitting bankers, scientists, biologists, holistic health practitioners, people tied to the DNC and Hillary Clinton and numerous other seemingly odd professions to experience sudden outbreaks of mysterious deaths. And we're sad to report in this new story that another such outbreak may now be unfolding before our eyes.

Within two days of each other this past week, the bodies of two former state Senators were found within their own homes, both of them shot dead. With the body of former Republican state Senator Linda Collins Smith found the day before the body of former Oklahoma state Senator Jonathon Nicols, one commenter on the Infowars story instantly picked up on the fact that Collins Smith was from the state of Arkansas while commenting "Old friends of the Clintons no doubt :( ".

Another commenter simply stated: "Arkancide=Clintons." Those mysterious deaths were just 2 of at least 5 this past week. Quite interestingly, Arkansas Circuit Court Judge Harold Erwin has sealed all police records surrounding the death of former Senator Linda Collins Smith and 'coincidentally', or not, Erwin 1st became a Circuit Court Judge in Arkansas in 1987, while Bill Clinton was governor there. With the Arkansas swamp one of the deepest, dirtiest and most corrupt in the nation, is another full scale cover up taking place?

And adding another piece to the puzzle, back on March 5th of 2019, the website Right Wing Watch did a hit piece story on Collins Smith, claiming that she had recently called into a youtube show put on by "Patriots Soapbox" and spoke about what RWW called all of the so-called 'conspiracy theories' that are floating around within 'right wing circles'. 'Theories' which we now understand were right on the money as they correctly painted the 'deep state' as treasonous under Barack Obama in their attempted coup against President Trump. Collins Smith was also very outspoken in her views on illegal immigration.

And as we hear in the 2nd and final video at the bottom of this story, Collins Smith had also allegedly been investigating Child Protective Services in Arkansas and had apparently discovered a massive underground child trafficking ring hidden within private organizations but funded by Federal Grants. And while we are unable to confirm it at this moment, the 'Clinton cartel' was allegedly involved in that as well. In the first video at the bottom of this story, videographer Ken Yang from Conduit News also takes a look at the mysterious death of Linda Collins Smith and while he doesn't mention Bill or Hillary, one commenter on his video pointed out: "Arkancided!!! She knew too much on OBAMA AND CLINTONS.."

So before we go on to the next section of this story which will take a look at the genesis of the strange patterns of mysterious deaths over the past several decades surrounding Hillary and the 'Clinton crime family', we have to mention here that the murders of Collins Smith and Jonathon Nicols were not the only mysterious deaths to happen last week. As the NY Times had reported back on June 6th, two Veteran New York City law enforcement members recently 'took their own lives' within 24 hours of each other.

The alleged 'suicides' of Veteran Police Chief Steven Silk, who was only one month away from retirement, and a homicide detective were immediately picked up upon by users of the website 4Chan who claimed that Silk was the Police Chief who handed over Anthony Weiner's laptop to the FBI and had seen the contents of it. And while this Heavy story reports that they found no evidence suggesting Silks was involved in handing over Weiner’s laptop, does anybody really believe that we'll be getting any truth at all about 'deep state crimes' or the 'Clinton crime family' from leftist media?

"C>H>A>O>S> theory of statistical deviation does not explain this ...

The alleged 'suicides' of Veteran Police Chief Steven Silk, who was only one month away from retirement, and a homicide detective were immediately picked up upon by users of the website 4Chan who claimed that Silk was the Police Chief who handed over Anthony Weiner's laptop to the FBI and had seen the contents of it.

Your own link even debunks the theory:

"Heavy.com has found no evidence to suggest Silks was involved in the handing over of Anthony Weiner’s laptop to the FBI."

"Far right internet activists have long maintained, with no evidence, that the Hillary Clinton is involved in an elaborate child sex exploitation ring. Many of these activists are involved in the QAnon movement. That group believes that President Donald Trump is about to expose this sex trafficking."

So is this you SS?

Let me put it in trading terminology. If there was a QAnon Conspiracy futures market, I would be short.....with an objective of it going to zero (-:

So is this you SS?

Let me put it in trading terminology. If there was a QAnon Conspiracy futures market, I would be short.....with an objective of it going to zero (-:

MM.  You are missing a factor in this equation.

How many homicides occur daily in the US?  The answer is roughly 43.

"MM.  You are missing a factor in this equation.

How many homicides occur daily in the US?  The answer is roughly 43."

Excellent point.  You are correct.

Also, not all 10 of these deaths were homicides. At least 2 were verified as suicides and I'm not motivated to investigate all these reports to see what the circumstances were for each one.

So out of the expected 129 homicides over a 72 hour period, what are the odds of 8 of them being "prominent" people?  Quite low for sure.

What if you multiply that by 365, 3 day periods in a year and then ask, what are the odds of such an occurrence happening in any 1 year?

We might ask also, out of the nearly 16,000 people that die from homicides each year, how many are "prominent"?

3% would be 480.  What are the chances that 8 of them would be killed in a 3 day period? Pretty low for any 3 day period but its almost expected, if you multiply it by enough 3 day periods.

This still goes back to the coin flipping exercise and it reminds me of something my wife has insisted on since I've known her.

"Significant people die in multiples of 3!"  I've heard many others say this silly superstitious thing and also refer to it as catastrophe's happen in 3's.,

So here is what's happening. The vast, vast, vast  majority of people die in multiples of 1.  After that, you get some coincidences from random variation that cause deaths or similar events to happen in 2's.  People can understand when another event like the first one happens again in a short period of time, then doesn't happen again for a very long time and they forget it and of course when somebody dies or an event occurs in isolation, they don't jot it down as being unique.

However, every once in a while, like with the coin flipping, you will get a streak of 3 people of significance that die in a short period of time. OMG! This can't be a coincidence you will think. And for sure, the impact on your memory of the things that happen 3 times in a short period is much greater than when just one thing happens by itself.

But its just random variation, just like getting a long stretch of heads or tails on a coin is not an indication that there's something unique or mysterious going on with the coin.

Related to this discussion. I looked to see how Hillary's brother died and there's no cause of death reported anywhere. That's strange and the only thing that makes sense is that its something embarrassing.

After being amused by Billy Carter, Jimmy's brother,  for numerous years, her brother's antics were not entirely unique. My favorite was when Billy had consumed a few too many beers and there was no place to relieve his bursting bladder, so he just did it outside in front of a bunch of political big shots.

6 Presidential Siblings and the Headaches They Caused

Since your field of expertise is statistics(seriously for those that don't know Larry) it's no surprise that you would give a stamp of approval to the use of statistics to explain this stuff.

What is the percentage of people who are investigating the Clintons, or who have damaging evidence who have been murdered/committed suicide?

As I have maintained, it's not proof of anything.  But two things come to mind.

One; it certainly is an interesting coincidence.

Two; for the last 2-3 years, we have watched Trump be convicted in the"Public Opinion", media, etc, on far less. And I strongly suspect that were we to see a rising death toll among Trump opponents, we'd see several more "convictions" accompanied by at least a few congressional investigations.

It's a great example of the bias that drives the perception of the "events" that shape our political  world.