Read about history and pick out a good one

"The Dust Bowl was a period of severe dust storms that greatly damaged the ecology and agriculture of the American and Canadian prairies during the 1930s; severe drought and a failure to apply dryland farming methods to prevent  the aeolian processes (wind erosion) caused the phenomenon.[1][2] The drought came in three waves, 1934, 1936, and 1939–1940, but some regions of the high plains experienced drought conditions for as many as eight years." 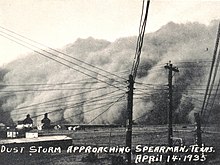 "On November 11, 1933, a very strong dust storm stripped topsoil from desiccated South Dakota farmlands in just one of a series of severe dust storms that year. Beginning on May 9, 1934, a strong, two-day dust storm removed massive amounts of Great Plains topsoil in one of the worst such storms of the Dust Bowl.[21] The dust clouds blew all the way to Chicago, where they deposited 12 million pounds of dust (~ 5500 tonnes).[22] Two days later, the same storm reached cities to the east, such as Cleveland, Buffalo, Boston, New York City, and Washington, D.C.[23] That winter (1934–1935), red snow fell on New England.

On April 14, 1935,  known as "Black Sunday", 20 of the worst "black blizzards" occurred across the entire sweep of the Great Plains, from Canada south to Texas. The dust storms caused extensive damage and turned the day to night; witnesses reported that they could not see five feet in front of them at certain points. Denver-based Associated Press reporter Robert E. Geiger happened to be in Boise City, Oklahoma, that day.  His story about Black Sunday marked the first appearance of the term Dust Bowl; it was coined by Edward Stanley, Kansas City news editor of the Associated Press, while rewriting Geiger's news story."

metmike: It's almost impossible for us to imagine how horrible this was for people living in these areas, especially farmers.

The movie made from John steinbeck's "Grapes of Wrath" left this young teen with images of that event. A mass exodus of families headed west towards California, where they were meet with shotgun barricades preventing entry.