Anyone trading coffee and sugar?  Coffee was kind enough to collapse back to it's lows after a little weather scare a month or so ago.

Now both are back to contract lows and seasonally, they seem to turn up at this time of the year.  Anyone trading that angle.  Coffee in particular seems to have leveled off.

And coffee is showing some signs of life.  :)  Sugar is hanging in there.

I did a post on coffee yesterday but must have failed to hit the send button. I'll get it together and post it in a bit.

This is where they grow coffee in Brazil:

The higher the number, the greater the production.

This link has more good stuff including a map that I can't copy here:

Coffee price charts. This is the September contract, with the December being the one with the most volume and the best to trade.  Note the double bottom and big jump up in price this week.

Drought in Brazil in 2014 caused a spike

Coffee prices dipped below 50c in late 2001 and the first half of 2002 before the time frame above.

Seasonals at this time of year are usually looking for a bottom. Harvest is over along with pressure from the increased supplies has peaked.

The threat for a freeze in Brazil ended a month ago and now the important weather element is RAIN!

Coffee country is dominated by a wet and dry season. The last 5 months have been part of the typical dry season, so lack of substantial rains is normal.

However, as we get into October, the coffee plants MUST have a good rain to flower. These flowers, unless aborted will be the starting point  as they turn into cherries which determines next years coffee crop.  No rain or an extension of the dry season longer than usual thru October becomes very bullish.

Early rains in September, are often not reliable because they can be followed by more dry weather and the initial flowers aborting. Ideally, the first rain is followed by additional rains(within, lets say 10 days or so) as the rainy season gets the reproductive stage of the coffee plants off to a good start.

Here's an excellent article from 2 years ago, reporting on how the coffee trees responded to the beneficial rains in October 2017:

What will happen over the next 2 months, is that the price of coffee will start trading rain events.

Increasing chances for rain will put pressure on coffee prices. Lack of rain will be supportive.

It's pretty early(rainy season a couple of weeks away) for KC to get overly exited about dry weather. Up until today, there has been no rain for coffee country but now we have a weather system in the farthest south areas in 2 weeks that has the potential to mark the northward march of rains and rainy season in far EastCentral Brazil/this area.

Coffee market is watching for the first rains of the rainy season, which ideally, starts in the first half of October, to trigger the initial flowering. Latest models show robust rains arriving in earnest late in week 2.....for the southern parts of coffee country.

Rains chances increasing towards the end of week 2 for the southeast half of coffee country.

This is getting close to the ideal time frame for the northward march of the rainy season which is needed in October to trigger widespread flowerings of the coffee trees.

Still looks like possible rains starting after day 10, which would trigger the first flowering in the areas that get enough rain.

COFFEE appears to have put in a weekly low August 20 in the 18th week of its weekly cycle, which would have been on the early side of normalcy.

It has rallied smartly since said date, I expect continued strength this week and into early next.

As per 'normal', the low preceded the breakout  on weather news 3 weeks later.  105 current resistance, then 114.

SO...MM, is the drouthy condition in SA going to continue?

"Fundamentally speaking Somar Meteorologia on Monday said that most arabica-coffee crops in the Cerrado region of Minas Gerais, the biggest arabica coffee growing region in Brazil, have not had significant rain in 3 months and that temperatures have been above average, which has stressed crops. Also, current coffee supplies have tightened after ICE-monitored arabica coffee inventories fell to a 1-year low of 2.316 mln bags on Friday." 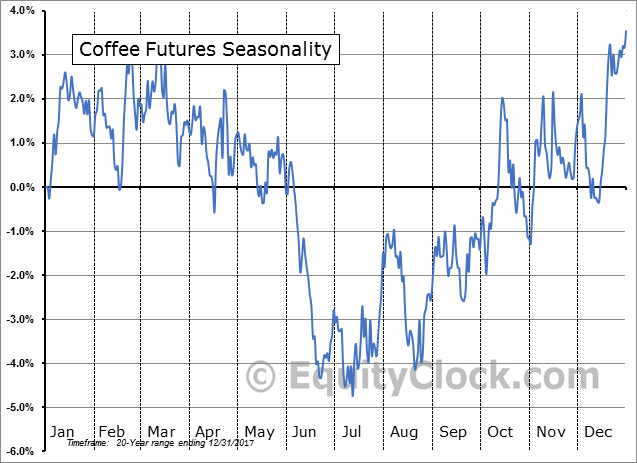 "Fundamentally speaking Somar Meteorologia on Monday said that most arabica-coffee crops in the Cerrado region of Minas Gerais, the biggest arabica coffee growing region in Brazil, have not had significant rain in 3 months"

It almost never rains there in June/July/August and even September rains are unusual. This is completely normal weather for their "monsoon".

The rainy season starts in October, which triggers the initial flowering(s). Only if no rains are seen in outlooks that go into a good part of October would the dry weather be seen as bullish. There is rain in the forecast right now for week 2 and this is still late September.

The months when they get blockbuster rains are Nov/Dec/Jan. Rains taper off after that, then they have the dry season again May-September.

So the point is.............look at the seasonal graph above. This is where coffee often bottoms because the harvest pressure during June/July/August and supplies from that putting pressure on the price have peaked/exhausted.

The weather forecast is NOT bullish. This rally is not from it being dry the last 3 months when almost every other year in coffee history featured dry weather during these last 3 months.

Coffee often bottoms after harvest is over even when the weather is bearish.

If the upcoming rains in the forecast go away, then the weather will add to the bullishness. If they get closer, you will get an opportunity to buy coffee cheaper. It's likely that, upon the first big rain getting close and falling that there will  be a spike down from selling at some point.

Thanks for your input Mike.  As always, it is appreciated.

Thanks for your positive contributions!

Coffee is reacting to the bearish weather/rains coming up in week 2 that will trigger a robust early flowering.

Weather is still a bearish factor with week 2 rains still in the forecast for the #1 coffee producing state of Minas Gerais.

Maybe a widespread 1 inch, with 2+ inches in the southeast regions.

Rains still on the way with coffee under more pressure today.

Good call on the weather impact Mike.  I took some profit a couple days ago based on your weather report.  :)

I'm actually looking to potentially buy KC this week or early next week based on the weather.  One doesn't want to be long ahead of the good rain event coming up this week,  unless those rains come out of the forecast.

However, this rain event, though being bearish and marking a potentially early start to the raininy season and surely triggering some widespread very early flowering(potentially bearish for the new crop prospects), must have follow up rains within  ???? amount of time.

Going more than 2 weeks before the next rain could result in the abortion of alot of those blooms/flowers before they become viable cherries on the coffee trees.

This is the risk in having a real early rain event like this, before the rainy season kicks in. It's always a good sign, that the pattern has been able to break thru the many months of the dry season, dominant upper level ridging but if this is a one off deal, it can actually be bad in the long run. Much of the energy expended by the coffee trees for this flowering/bloom would be wasted if we don't have any rains until, let's say, the 2nd half of October.

It would have been better to have NO rains at all, then have the rainy season commence 3 or 4 weeks later and stay sustained, so that all those blooms take and become abundant, viable cherries.

I'm confident, that if the forecast turns bone dry after this week(going out the following 2 weeks) that we will be back up to at least test these recent highs.

Another good rain in less than 2 weeks, and it won't be the weather that takes us to new highs. Seasonally, this is the ideal time frame for a bottom in coffee.