Hi there November 8th!   Smile and say hello to some real people today.  Then think about how lucky you are to be living in this era of plenty in human history!

Mostly  dry pattern for the Midwest. 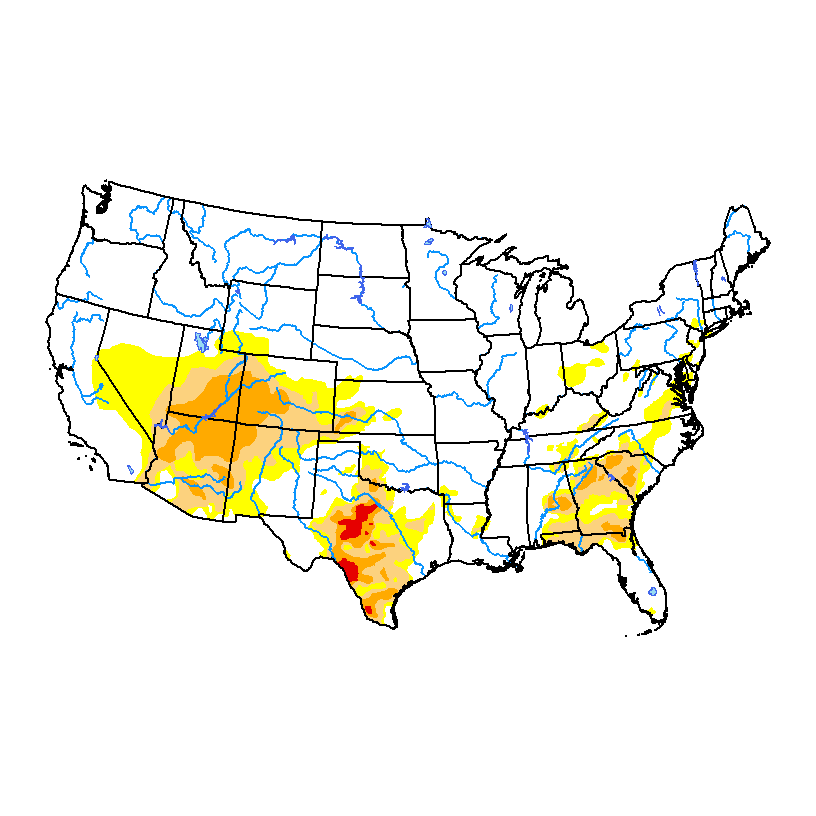 Thursday: Still looks like the cold will moderate a great deal, see bottom of this thread.

The EURO Ensembles show a classic cross polar flow next week. If this were late December or early January many areas would flirt with all time record lows. What you are seeing in this 500mb heights compared to average. Heights are well above average into eastern Russia and that sends the jet stream from Siberia straight down into the Ohio Valley. This set up usually produces extreme cold. So Monday through Wednesday of next week looks very cold for many. I expect numerous record lows with a few all time record low temps for November, which is very impressive for it being the first half of the month. 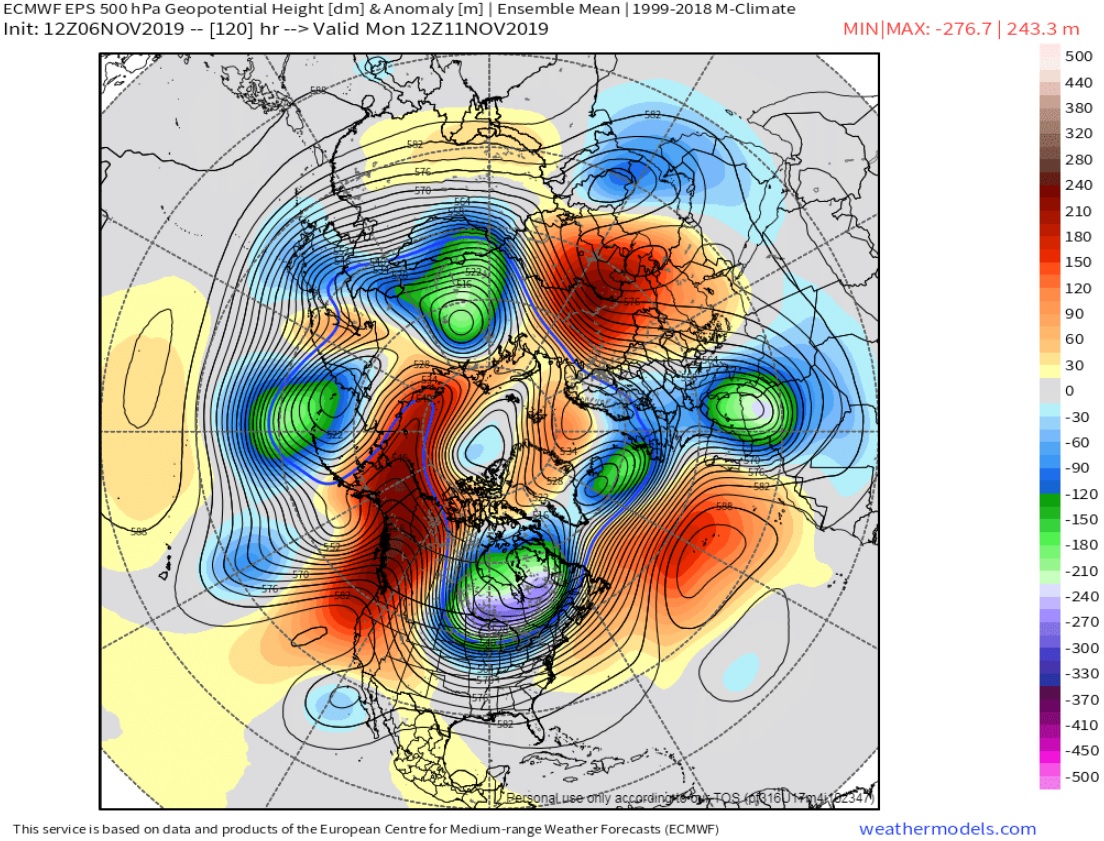 It really is amazing Grant. Thanks for the map.

My thinking is that the target for this extreme cold will be shifting to the other side of the N. Hemisphere in week 2.

It's still a chilly pattern but the connection with the coldest air in the highest latitudes will be disrupted on this side of the North Pole as that coldest air goes the other way to N.Asia. .............if the model solution below (0z GFS Ensemble mean anamoly) is on the right track.

The first map is the upper level heights, 2nd one is temperatures at around 1 mile above the surface. The time frame, 360 hours is the end of 2 weeks.

Here are those same 2 maps in 5 days, at the time frame you referenced.

Look at the huge difference. The top map shows the solid/unbroken positive anomaly going up the entire West Coast of North America and all the way up to Siberia as you noted, on the front side of that we have a deep, cut off Polar Vortex low that has plunged to a center just north of the Great Lakes.

That massive ridge west, trough east couplet is maximizing the cross polar flow originating from Siberia that is continuing south, crossing all of Canada with north to south steering currents, then diving deeply into the US, thanks to the upper level low position. This is the Polar Vortex displaced unusually far south.

The previous page which is day 14, shows that has shifted to the other side of the North Pole with no extension/connection from south to north like we have now.

Here are the maps again for the end of week 2 to help visualize the big changes, especially for the top-500 mb maps.

Note below, the separation between the big yellow/orange anomaly on the other side of the North Pole and the very weak one along the West Coast. The Siberian express connection is broken!

The Polar Vortex low has been replaced with a weak upper level trough in the Midwest.

For the US, this is still a ridge/west, trough east couplet which often means below normal temperatures but the magnitude of the cold will be modest compared to the brand we see in several days.

Actually, looking closer at this pattern from doing the current analysis, I think that it could flush out much of the cold in Canada and Canada may have MUCH above temperatures, starting late in week 2.

So there will still be cold fronts in week 2 and beyond with this pattern but they will not have major cold with just slightly below average temperatures when the Canadian air gets here.

Re: Re: Weather Thursday

A few spots in the northwestern Corn Belt and northern Plains below zero for lows this morning...close to 30 degrees below normal

And an even colder air mass arrives for early next week 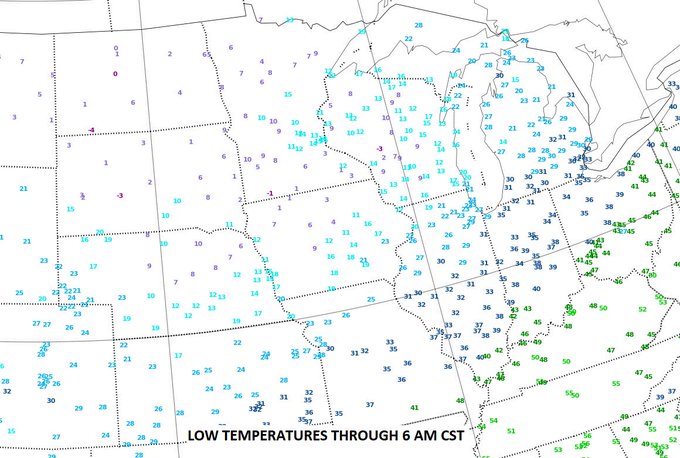 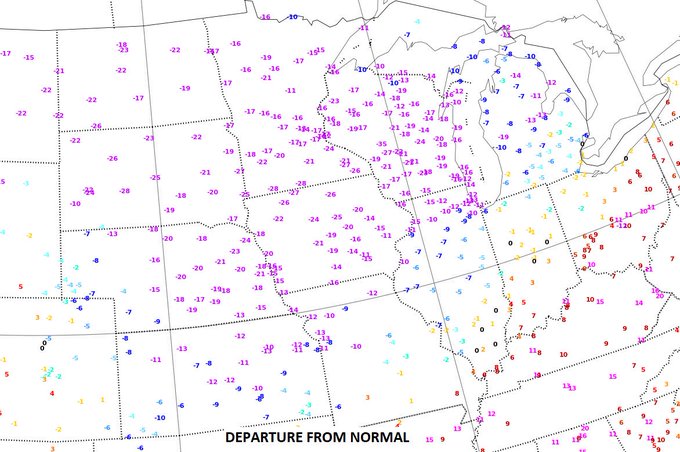