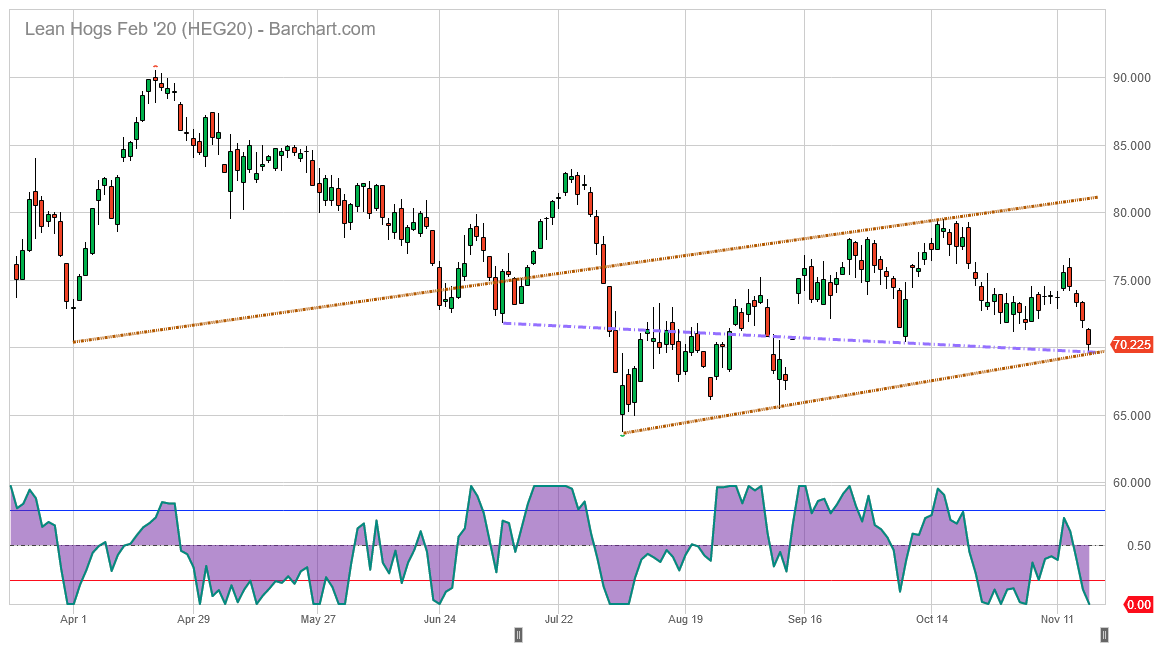 Looking at the Feb HOGS and the 70 cent level. Alot of stuff coinciding to give support right here, right now.  so, Feb hogs at 70 cents and a stop below today's low of the day.  Selling looks exhausted. 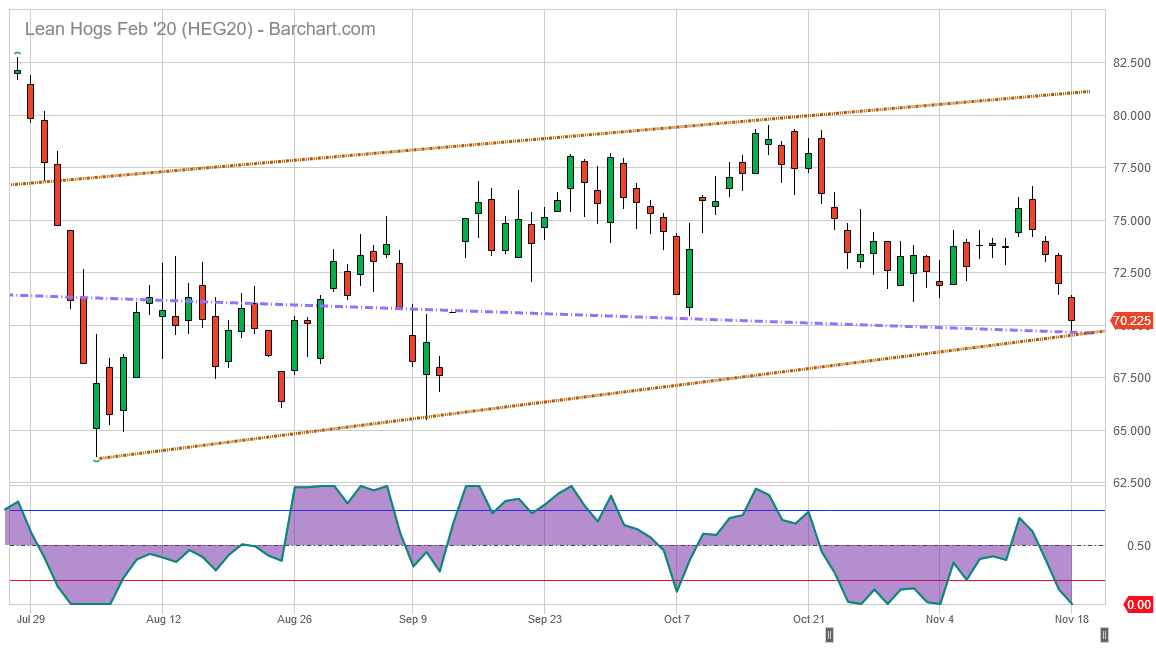 That certainly is a bold statement

However, given the fundamantals I would agree with you, to the extent the bottom is either today or some time this month

I usually have very little faith in charts and the fact hog slaughter is up, plus heavier slaughter wts would make a person doubt your for sight

But deeper analysis bears out your prediction

Has china already swooped in and bought zillions of contracts to hedge their need for pork. Now why would they do that??

The industry seems poised to sell much more pork to china and in fact much of Asia, even though exports have risen a bunch, I am convinced even  more will be coming down the pike

We knew ASF was spreading, it can not be contained by waving a magic wand as much as the communists leaders wish nor can China re-populate immediately

We knew china retail prices had increased by over 100%. Now that is a mighty big increase

And still we watched, not believing china would buy USA pork

Well guess what. The packers have sent out a letter asking for no more of some kind of feed additive as it will not sell in china

What does all this tell us

China wants our pork. They will be a buyer for some time. They have already inked a deal for Canadian pork, even as the Chinese lady remains in limbo. Golly why don't you just take her??

When the well goes dry you have to do some thing

And that is exactly what is happening

All while we stood around and said no way Hossay

Some good information. Thanks.

Hog and beef exports to china

Thank  you for directing your astute attention toward my huffing and puffing.  Seems today may have been the most bearish news day possible.  Slaughtering mountains of elephant size hogs reported and the price did not lock limit down.  In fact it peered over the 70 cent support ledge and didn't like it.  Falling 7 cents in 4 days hammers down a cycle low right in time for the holiday seasonal rise.  China shrewdly waiting, maybe even engineering this washout dump, bedrock, barebone, rock bottom plop.  Meat prices are known for their "V" bottoms.  7 cents back up lickety split, there's overhead vacuum gaps need filling.  If China really shows their hand, pork be sizzlin' something fierce! 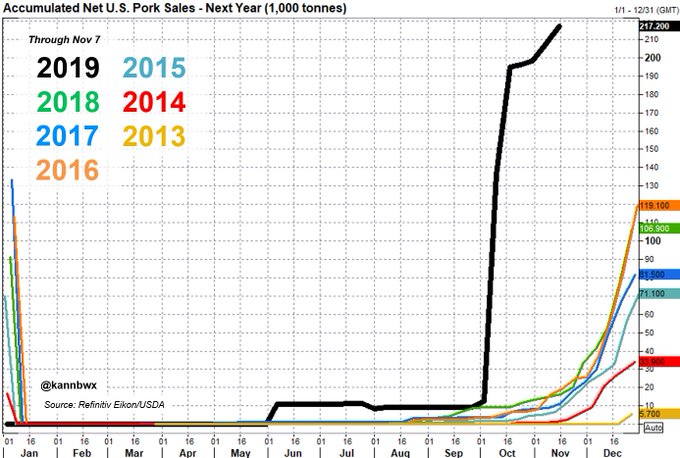 Reminder - the sales for the week ended Oct. 3 were crazy large, and USDA confirmed that the total included previously unreported sales. No details on how much was old, when they happened, etc. So the trend could have looked like this? We don't know.... 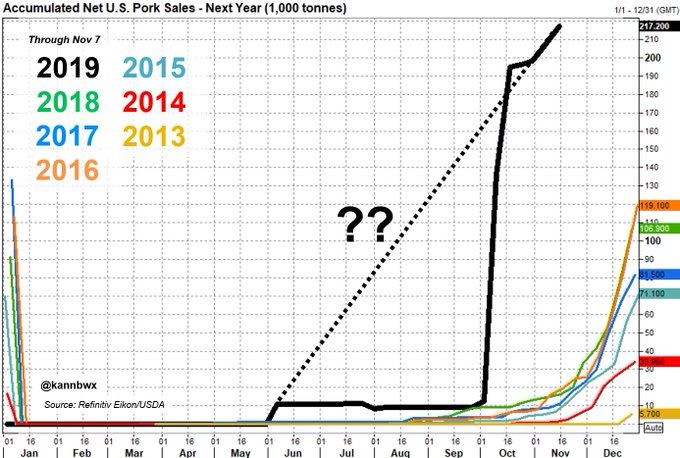 But - when we see anomalous numbers like this - always good to peel back the layers. This chart is showing that total U.S. #pork sales for 2020 to countries OTHER than #China are indeed record high for Nov. 7, but not by much at all. 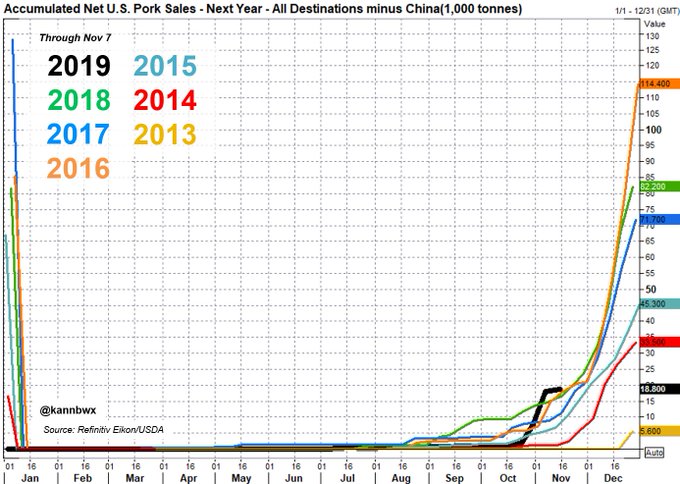 For completeness, here's U.S. #pork sales for 2019 - shown with all buyers and then excluding #China - still record without them. Some 1.59 mmt total, and 1.19 mmt without China. 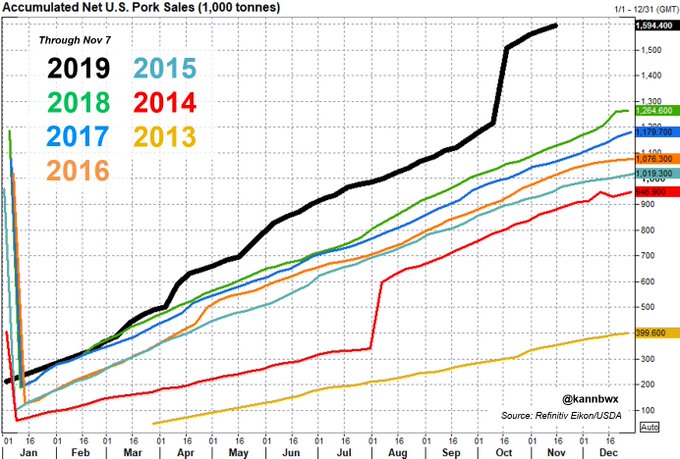 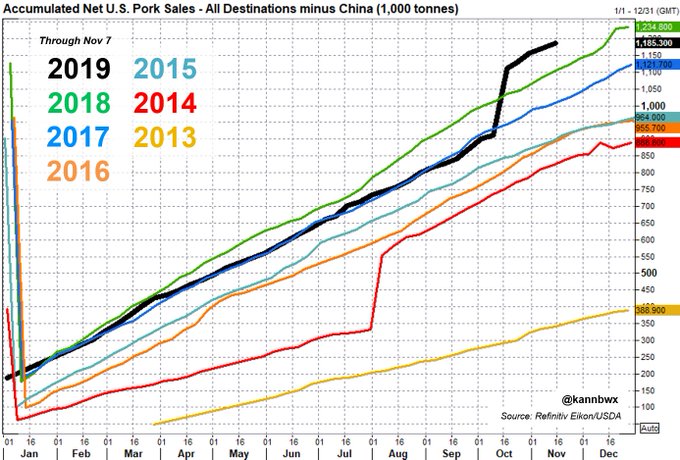 In 1972, Russia’s wheat crop failed. Russia had to dip into the global grain markets to meet demand. Before Washington knew the plight of its Cold War adversary, Russia bought up all of the surplus wheat in the US. Dubbed “The Great Grain Robbery,” Russia’s purchases sent grain prices soaring around the world.

Some of the old traders are wondering if it’s happening all over again, this time with hogs...

Large sales are supposed to be reported to USDA

This was after the great Grain Robbery

Did somebody not report as soon as they should??  Naw that wouldn't happen

Also the Russians in concert with 3 of the biggest merchandizers [Cargil being one, forget the others] did not say anything until the majority of the wheat had left the farm. Thus the farmer did not receive the big price

Southern Korea has it on the northern border, so one has to believe N Korea is infected. S Korea dug a pit and buried infected hogs but it seems once ASF gets a foot hold there is no stopping it

That is why I believe sales can only increase

I dunno if this is true, but if true how the heck do you stop the disease

I never saw a wild boar so what do I know

I did read the book "Old Yeller" 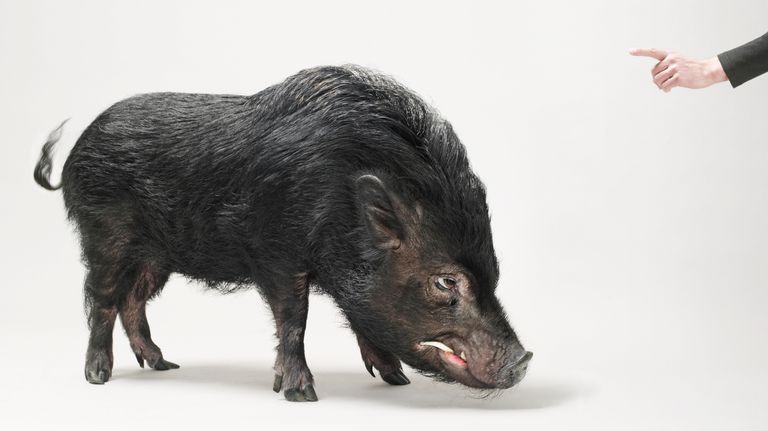 Fancy lines act like they weren't even there, no support now.  My skin in game, burnt...

Hogs are about half the price of cattle, yet down twice as much, today.

Sorry for no link but an opinion is just that

An opinion so: why bother with a link???

However, it is a fact the USA is exporting to china --big time

The EU is priced higher than USA values - even with tariffs

However any way you look at it

ASF and hog deaths are real and in huge numbers

Been dwelling on your comments about the great grain robbery and how you point out that the dealing done was behind the door and did not allow the farmer to benefit. Maybe same here, as more than half the planet's hog population is wiped out and exports rage to supply hungry countries.  I read that their pork prices are at new highs, yet American farmer is getting new lows?  Same with any farm commodity, the middlemen reap the rewards while the producer takes on the actual work, risk, worry and woe.  Maybe a 'delayed reaction', but markets anticipate the future?  More so, they manipulate for profit.  Key here is to think like the middleman manipulator does, which sometimes goes against logic, fairness and is contrary to usual expectation.  Right now am long soybean meal, which we will need to rebuild the hog herd, right?  And long hard red wheat, Kansas City, here I come!

In response to asf, it appears farmers have amped up production/supply hoping to cash in. I haven't heard any comments about empty hog sheds. Perhaps there is an equilibrium of s/d.