Possibly a NTR subject but we can't ignore what it's done to wheat and feedgrain production in Austrailia. Also picking up news of greatly reduced Russian grain production.

Can't really tell from that how the crop will be affected, since it's winter wheat & the last crop is in and the next one not planted, but Australia is #6 in wheat

Happy New Decade to you Patrick! Great to read you! 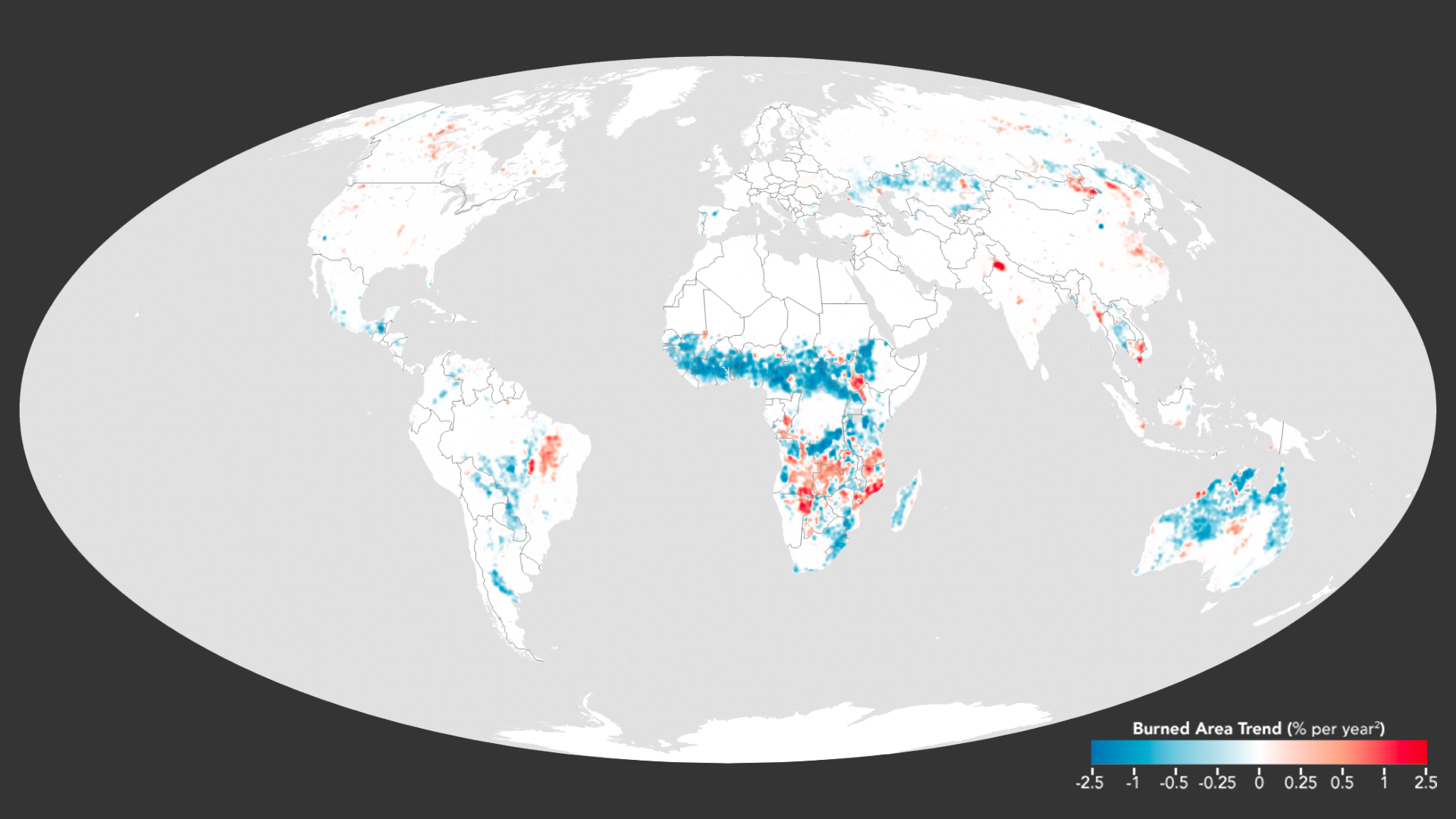 "Globally, the total acreage burned by fires each year declined by 24 percent between 1998 and 2015, according to a new paper in Science that analyzes NASA’s satellite data, as well as population and socioeconomic information."

metmike: The current fire season is possibly going to be the worst ever for Australia. This is a very bad thing. How do we explain that? Thankfully, we have data to offset scary words about how this is unprecented from the climate emergency and will keep getting worse and worse.

First of all, if you look at the graph of fires in Australia the past 50 year from this  link (can't be copied here) https://www.theguardian.com/australia-news/2019/dec/25/factcheck-why-australias-monster-2019-bushfires-are-unprecedented

, you will NOT see a trend higher. In fact, before this year, the past 2 decades featured a LOWER trend. What we do see is isolated, really bad years.........like 1984 and even worse, 1974. This is called random variation which has been happening since long before humans could measure it. With extreme weather. With wildfires. With volcanoes. With all natural disasters and many other events.

Every single year on this planet there are numerous places setting all time records for something. It's always been that way and always will be that way but extreme weather is not getting worse overall. Sure, the heat waves are a tiny bit hotter in some places in the Summer because of the global increase in temp of 1 deg C(and we hear all about every record heat wave) and cold waves not as cold but we are experiencing the best weather/climate in the last 1,000 years.

Most life on this greening  planet would prefer a global temperature up to 4 deg. C warmer than this. Only at that point would negatives outweigh the many positives.

Every year, widespread droughts develop somewhere and go away somewhere else. It's always been that way and is called weather. Today, we only hear about the drought prone locations when the inevitable droughts hit.........Australia and California for instance.

We hear they are caused by the climate crisis and will get worse and worse but then, when they go away it's not news any more and we are never told about the past extreme weather/droughts because that would not make today's weather unprecedented anymore.

"Less than 1 percent of the state is in any kind of drought status, down from 48 percent a year ago"

But the data here shows it..........the authentic facts vs scary words to convince people of the fake climate emergency to use as ammo for imposing the political, anti science agenda(pretending to be science). 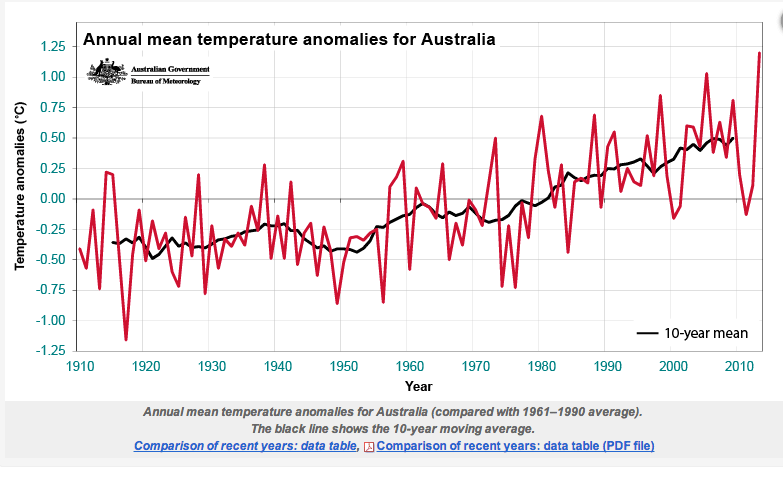 Is this current record heat unprecedented?

Post by: Lance Pidgeon with assistance from Chris Gillham and others.

It is as if history is being erased. For all that we hear about recent record-breaking climate extremes, records that are equally extreme, and sometimes even more so, are ignored.

Yes, this horrible fire season in Australia is not entirely unprecedented. It's more likely under modern conditions, but there's no particular reason to think it will be a regular event. The 2C warming of the sea off the southeast  - and its effects on the traditional sea life, 95% kelp die off, southward fish migration, and coral bleaching, is clearly more long term and harder to reverse.

In trading terms, we're talking about how Australia will react. Fire, particularly blasting through the most populated part of the country, gets people's attention.

I've started a new thread in the NTR section to continue this discussion since I made it more(metmike is guilty) about the fake climate emergency vs trading.

However, cliff is spot on about the wheat market often trading Australia's weather. I will find some relevant maps and information(to go with what you provided) that show more about this. Like you stated above, in the S.Hemisphere right now, its the same as July,  for us in the N.Hemisphere and the Winter Wheat crop has been harvested and is months from being planted.

They had a very poor crop and this must have led to some of the wheat strength late last year.

Note on tallpines chart the soaring price of wheat coinciding with the drought in Australia!

This may also explain  some of  the incredible strength in the Chicago wheat vs the KC wheat last year.

Here was the news that came out earlier in December:

SYDNEY, (Reuters) – Australia on Tuesday cut its wheat production forecast by nearly 20 percent for the year through June 2020, as an unrelenting drought across the country’s east coast will likely see output fall to an 11-year low.

As Australian farmers were harvesting crops, the Australian Bureau of Agricultural and Resource Economics and Sciences (ABARES) pegged production of the country’s largest rural export at 15.85 million tonnes, down nearly 18 percent from its previous estimate in September of 19.2 million tonnes.

The forecast is nearly 35 percent below the 10-year average, and means a third consecutive year of lower-than-average production – as output falls to the lowest level since 2008.

The decline has crippled growers and exporting companies, and has provided a hurdle to an economy that is already threatening to stall.

ABARES said the dwindling production was driven by hot, dry weather across major producing regions, which has left many farmers struggling to produce any crops at all.

“We’ve finished harvesting. It was a pretty sad affair, with production about 90 percent down on normal,” said Dan Cooper, a farmer in Caragabal, New South Wales, located 400 km (250 miles) west of Sydney."

Looks like the USDA started lowering estimated Australia wheat production back in early October(same as our April).

The data below was from October:

This is where they grow wheat in Australia:

The market would not be trading Australia weather closely right now, since we are in between harvest and planting but here it is.

If the drought is still raging in a few months, the market WILL be trading Australia's weather. 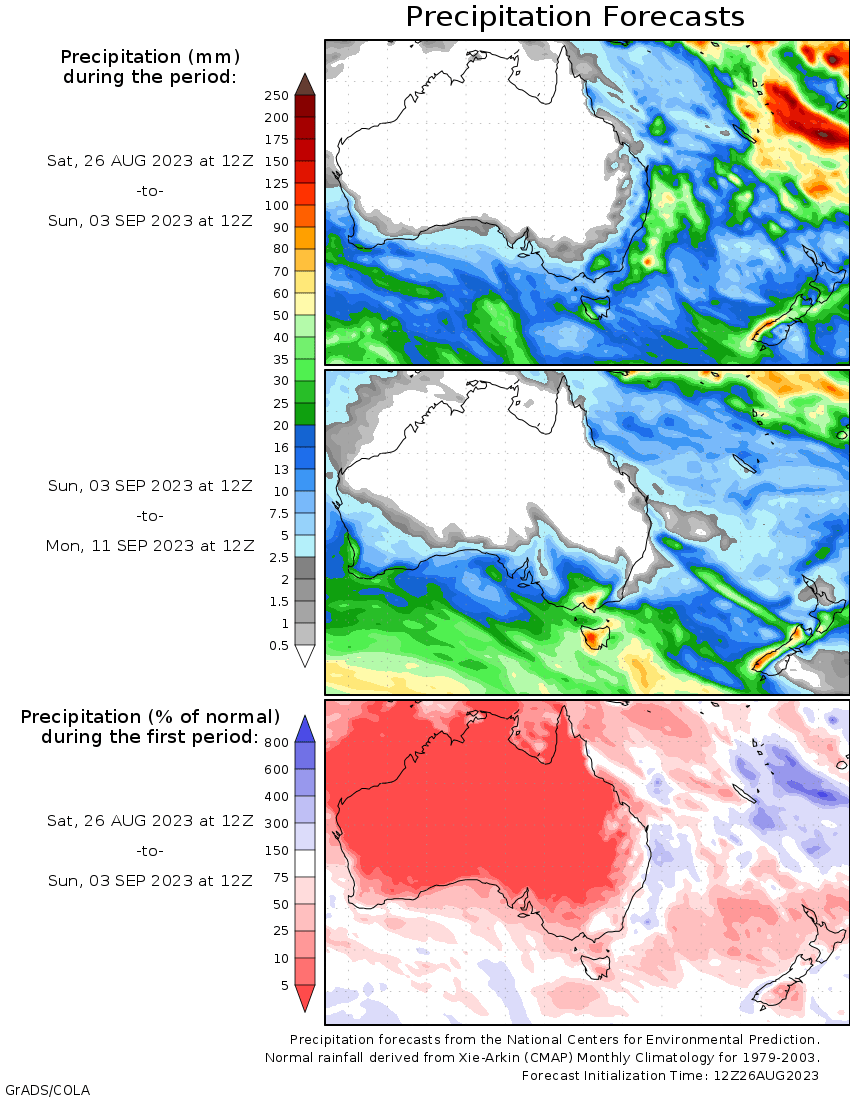 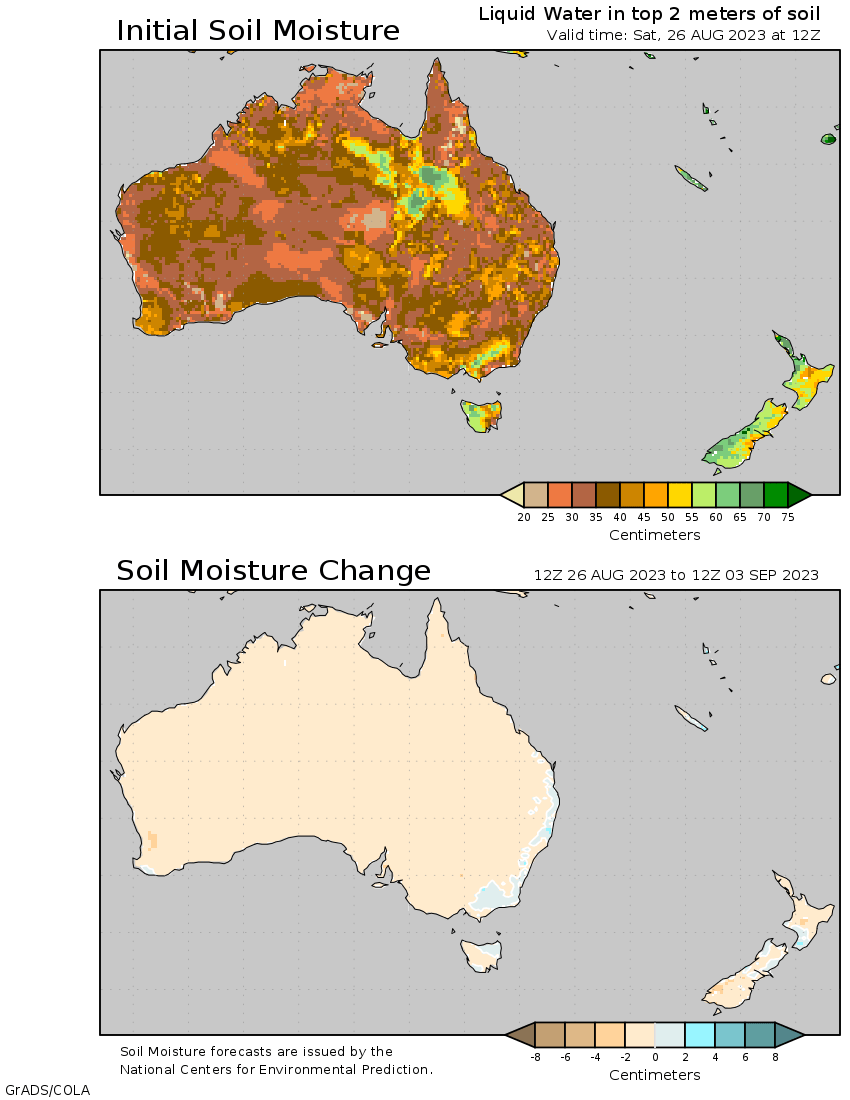 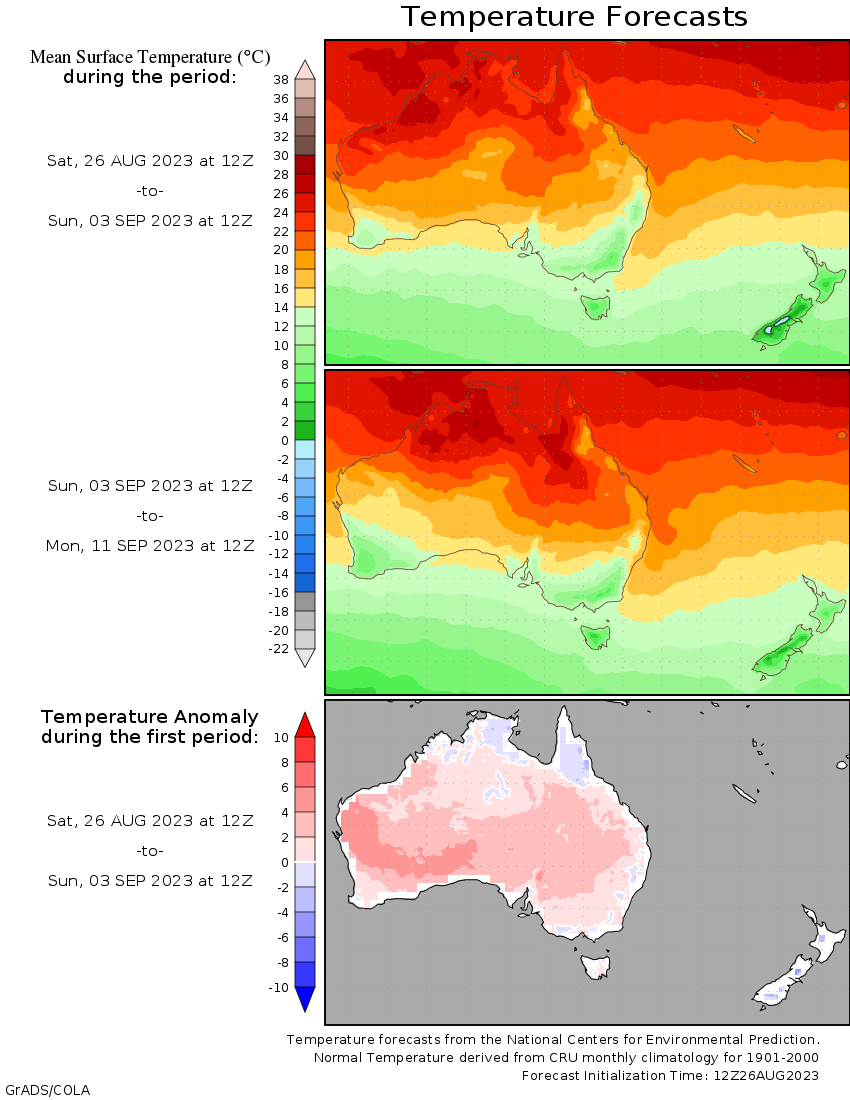 Big rains hitting Australia finally, scroll up for that forecast!!!! 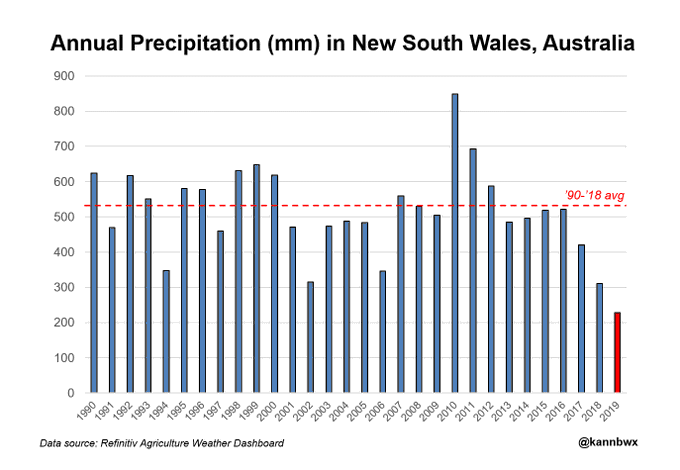 This chart emphasizes how poor precipitation has been in the past two years in NSW, #Australia, relative to normal. The thick black line is 2019 and the pink is 2018, dotted line is the long-term average. Precip was okay in Oct-Nov 2018 & Mar 2019, but otherwise critically low. 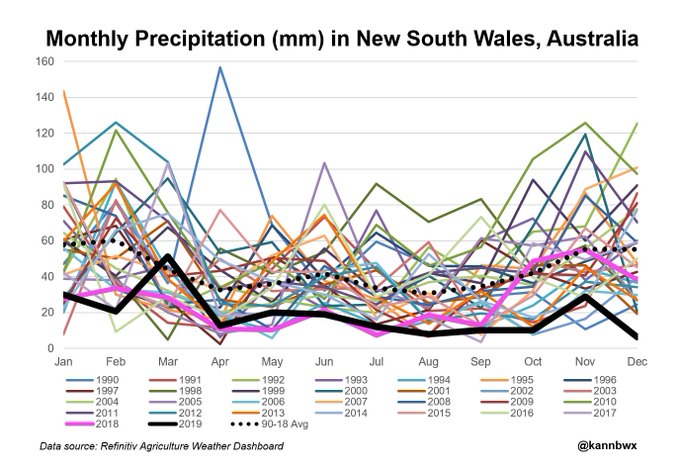 More than a hundred fires are still burning across Australia, with flare-ups on Kangaroo Island leaving residents without power

Heavy rains forecast for this week are unlikely to end Australia’s long-running bushfire threat, despite pockets expected in bushfire-affected areas. 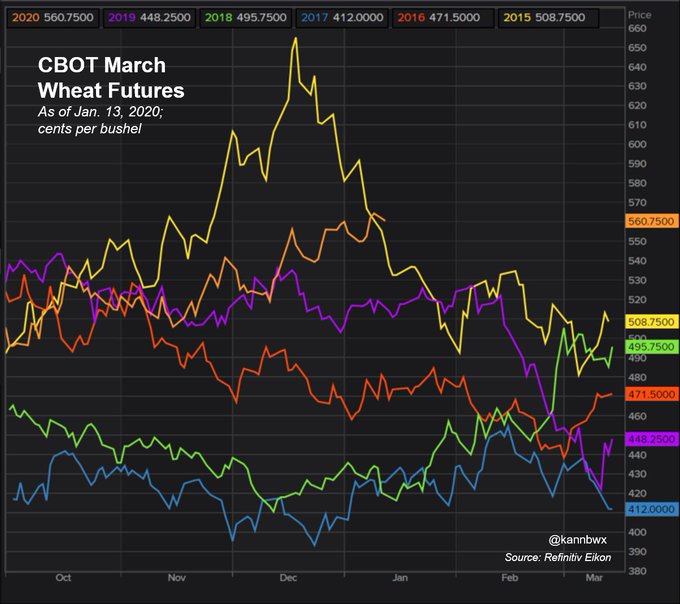 Still some rains for wheat country but not nearly enough to bust the drought.

Rains will be shifting away/north of key wheat growing areas..........missing the west completely.

Decent rains coming the next 2 weeks to help parts of the East and South but not much help Southwest(where less wheat is grown). Scroll up to see that forecast and the change in soil moisture predicted.

May Wheat Short Sale Setting Up

Climate outlook for February to May 2020

Take this long range forecast with a grain of salt.

Good rains forecast for Eastern Australia the next 2 weeks.

In the US, dry areas of KS just got bombed with 1-2 inches of widespread rains, very welcome for the dormant HRW crop there which will use that moisture when it comes out of dormancy this Spring.