The CDC estimates that this winter's flu season has caused 380,000 hospitalizations and 23,000 deaths in the US alone

so, be careful, the flu is out there. Practice social distancing, wash your hands, stay home if you can, and you should be able to easily survive this winter's flu season.

But Tom Hanks got the Corona Virus and it was headline news for several days.

I started out completely skeptical about the seriousness of COVID 19,  then got to where I just wasn't sure..  didn't know what I didn't know,  etc...     Now I'm getting back to skeptical...

No matter what happens,  we'll be hearing that it would have been much worse had we not taken the steps we took..   But how bad would it have gotten?   Worse than the flu?   About the same?  Not as bad?

We'll never know for sure...     but I somehow can't shake the feeling that this would have never reached the scale of the flu regardless of steps we took,  or did not take.

I think that without the steps that we took it could have potentially ended up worse than the flu with regards to deaths.

It's more than twice as contagious(with no vaccine or immunity) and kills old/sick or immune system compromised at a rate close to 10 times that of the flu(especially high because most of those vulnerable people are  usually vaccinated from the flu).

We will never know, like you said but can you imagine if this was as deadly as ebola,. which killed 50% of the people that it infected?

The biggest risk from the coronavirus is that so many of the very sick require ventilators and we have a limited number ventilators/ICU beds in some states.

If not for the potential for the infected to overwhelm the health care systems ability to provide ventilators, then I would say that we may have gone overboard with the draconian actions that have shut down our country.

But the ventilator issue is for real and justifies the extreme actions in many places.

In the hotspots, like NY, WA, CA, Chicaco, Detroit the shutdowns are completely justified.

However, there are literally thousands of rural counties with single digit to no cases reported. Some of them are completely shut down because of these hot spots when the chances of things getting extreme are minimal or that county running out of ICU beds because of this very unlikely.

We could have done a better job testing and identifying people early and trying to limit their exposure to others.......but a pandemic is not something that we have every year and have lots of practice dealing with.

The initial response was too slow but then seems to have caught up.

The majority of Americans feel that President Trump is doing a good job right now.

The new poll finds Trump’s job approval rating at 49 percent, up from 44 percent in the same survey earlier this month. The 49 percent job approval rating is the high mark for Trump since he came into office. He first hit that mark in late January, shortly before he was acquitted by the Senate in his impeachment trial.

The president’s job approval rating has remained steady among Republicans (92 percent), but he’s gained 8 points among independents (43 percent) and 6 points among Democrats (13 percent).

It appears that Trump’s handling of the coronavirus response is behind the approval rating bump. Sixty percent of voters overall said they approve of the job Trump is doing to address the epidemic, including 94 percent of Republicans, 60 percent of independents and 27 percent of Democrats.

Trump has been criticized by a number of Democrats in Washington who say he was too slow to recognize the threat of the virus and that he downplayed the threat at critical moments early on. A shortage of test kits has been a major problem, although it appears testing in the U.S. is accelerating fast.

But the president’s daily press briefings, in which he has surrounded himself with health experts, appear to be cutting through to the public.

CNN tries to convince viewers that the sky is falling, its going to get much worse and its entirely Trumps fault.  They do this around the clock.

I've been intentionally leaving out the politics and some of what the MSM is doing to make the  crisis seem worse to increase chaos/panic and try to pin it on President Trump.

They will do anything to keep him from being elected again.

Last week Condoleezza(what a unique name) Rice was being interviewed by phone by Wolf Blitzer one day last week. The objective of the conversation was to let us know that President Trump was warned by President Obama's administration that a pandemic could happen just like this but he ignored it.

She told us about how in the last few days of her administrations handing the baton over to the Trump administration, they informed them about this exact type of scenario playing out to prepare them but got ignored. Wolf kept asking specific questions about whether she had first hand knowledge about  President Trump himself actually knowing.  Was he at any specific meetings to discuss this? for instance. .  His objective was crystal clear.............connect the entire blame for this  specifically to one person,  President Trump going back to 2017.  She responded that Trump was not there but his people should have passed on the information and he must have known.  No mention about others that should have known(who's job/profession this is) or asking her, why didn't President Obama's administration/people make changes to prepare us for this prior to 2017 and take actions to prepare us, instead of doing nothing special then telling us they suddenly knew in 2017 and told Trump. Wolf continued to ask questions designed to evoke responses from her that suggested Trump himself must have known in 2017 and Trump, himself intentionally made decisions back then, in the face of all the Obama information, that caused the United States to not be prepared.

One of the most pathetic, counterproductive political hit jobs using a crisis that I ever listened to.

Which is why I would prefer to not discuss this topic much........making the virus political. because this really is the only thing related to the virus that might  raise my blood pressure and is completely unproductive.

No question that the testing process has been a huge failure, with not nearly enough tests early on...........for numerous weeks and this has caused the situation to be worse than it would have been.....but to paint the US like we are totally unprepared and behind the rest of the world is false.

People will believe what they hear on CNN and other stations but the organization that did the study below late last year is very credible (and know more than I can ever know about pandemic preparedness) and if you are President Trump looking at the results of this comprehensive study with the US, clearly as #1, how is it that he  should be thinking that the US had much more work to do to be prepared for something that the the Johns Hopkins Center for Health Security and the Economist Intelligence Unit says we are the most prepared for?  Or like CNN and others, like people connected with Obama that did nothing,  say he should have been doing the past 3 years?

Good to be critical of the massive testing failures and some other things(a pandemic, unfortunately does not have a playbook to follow because it might be different each time depending on the invader).

Not good, however  to intentionally mislead people to make them think that the US is/was totally unprepared.  There are some great things to help us, happening right now. It would be nice for the media to also report more on that.

On the study below. We are finding out who really was prepared and who was not for this particular pandemic. The US thought that it was prepared(and was not nearly prepared to the extent needed) and so did the experts that did this study.  But to claim that Trump should have somehow known more than the John Hopkins Center for Health Security(and his advisers),  that told him and the world that the US was the best prepared? Give the guy a break.

After the horrible start, it appears that the US is doing some good things too. There is realistic hope of a couple of drugs that might work and the weather warming up to diminish the virus and help bail us out from the really bad start we had. 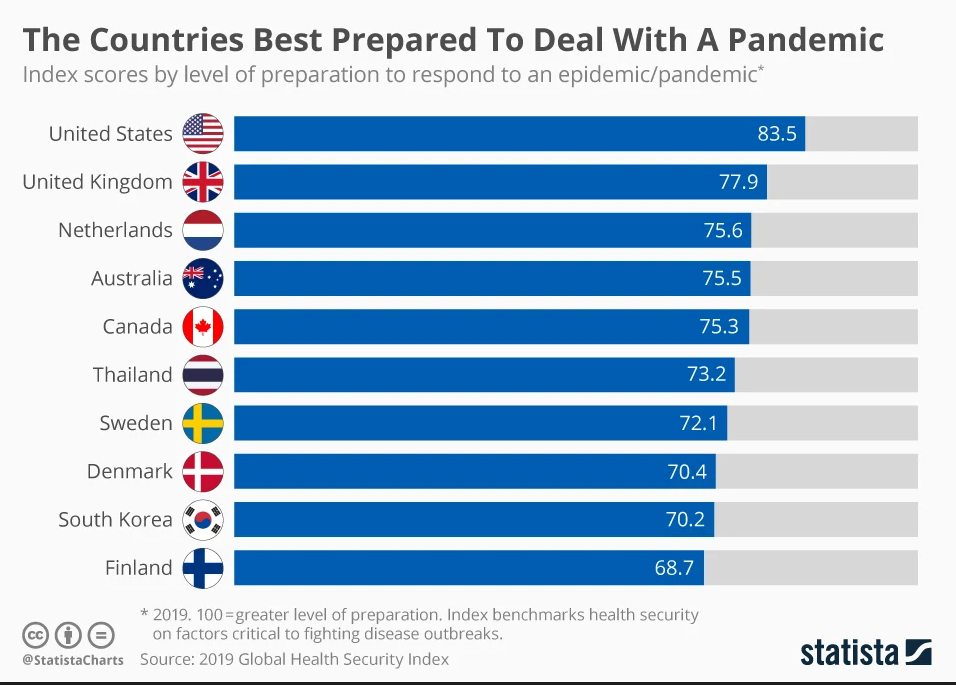