Supposedly there was a draw on both crude and unleaded in the API tonight?

Where is it going?  Traffic has died here in my part of NE Ohio and I live about 5 minutes from a highway.  They are either very good at hiding it or someone is lying.

I wonder the same thing as you. Are they turning off the supplies at the same time, anticipating the massive demand destruction and this might be offsetting?

With unleaded trading at 47c, the market is absolutely convinced beyond any shadow of a doubt that there will be an historic supply glut soon.

And nothing is going to stop it.

It's just a matter of how big the glut will be.

Enough to support 47c gas in the futures market?

"The American Petroleum Institute (API) estimated on Tuesday a crude oil inventory draw of 1.247 million barrels for the week ending March 21, capturing the period before over half of all Americans went into lockdown mode this week—a development that will surely curb the appetite for oil.

Today’s inventory move was expected to be for a build of 2.774-million-barrels.

In the previous week, the API estimated a surprise draw in crude oil inventories of 421,000 barrels, while the EIA’s estimates were more bearish, reporting a build of 2.0 million barrels for the week.

Oil prices were trading up on Tuesday afternoon prior to the API’s data release on new hopes that a stimulus package would be passed and that the oil price war will come to an end with the US intervening.

The API reported a large draw of 2.622 million barrels of gasoline for week ending March 20, after last week’s 7.834-million-barrel draw. This week’s draw compares to analyst expectations for a 657,000-barrel draw for the week.

US crude oil production as estimated by the Energy Information Administration showed that production for the week ending March 13 resumed its all-time high of 13.1 million bpd."

metmike: From the last 2 months of data, it seems clear that without this Coronavirus shut down, the crude and products had some bullish fundamentals ready to take prices much higher.

To your point about bullish fundamentals, you have to wonder how that would be possible with 80 million people locked in their homes in China.  Italy locked down, no travel, flights cancelled every where.  We have been talking about lag results for weeks.  Maybe if they fill up all the floating storage first, it won’t look like we are going to drown in oil.  Can’t hide it forever.

Thanks jim......Maybe you misunderstood me or me misunderstand you:

metmike: From the last 2 months of data, it seems clear that without this Coronavirus shut down, the crude and products had some bullish fundamentals ready to take prices much higher.

Jim: To your point about bullish fundamentals, you have to wonder how that would be possible with 80 million people locked in their homes in China.  Italy locked down, no travel, flights cancelled every where.

Do you agree with that?

I see what you're saying now Mike.  Yes, I would agree.

I don't know if you have access to Hightower report.  It's as if they were reading our conversation.  Crude oil and unleaded is piling up in China and in Europe.

It's crazy that we haven't seen any of that in the API or EIA reports yet, but it would appear it will eventually.

The EIA report has a small build due to a 2 MMBPD day fall in total consumption. Really a bearish report, not that that usually matters.

Doesn't it seem like a lot of carry in crude?  $7 between may and oct?

Jim, that article was very enlightening for me.

PUBLISHER’S NOTE: To date, since coronavirus hit the headlines, seasonally-adjusted inventories, that is inventories relative to the five year average have failed to build as we’ve seen relative draws for crude, gasoline and distillates of 19.2 million barrels over the last four weeks and 34.4 million barrels over the last eight weeks. That said, we expect inventories to start to build relative to the five year average in the coming weeks as the demand impact from the pandemic takes hold.

U.S. crude oil refinery inputs averaged 15.8 million barrels per day during the week ending March 20, 2020, which was 18,000 barrels per day more than the previous week’s average. Refineries operated at 87.3% of their operable capacity last week.

U.S. intervenes in Saudi-Russia oil war with call for restraint

Secretary of State Michael Pompeo spoke to Crown Prince Mohammed bin Salman on the eve of a conference call between the leaders of the Group of 20 on the global pandemic and its economic fallout.

“The secretary stressed that as a leader of the G20 and an important energy leader, Saudi Arabia has a real opportunity to rise to the occasion and reassure global energy and financial markets when the world faces serious economic uncertainty,” the State Department said on Wednesday.

Oil prices have plunged as the Russian-Saudi price war compounded the unprecedented hit to consumption from the coronavirus pandemic. Futures pared losses after news of Pompeo’s call, with Brent crude little changed near $27 a barrel.

The U.S. view is that the oil glut aggravates an already difficult economic outlook, and it wants all nations to work together to reassure energy markets, according to an official who asked not to be named. The U.S. and Saudi Arabia are in close cooperation about how to improve conditions for growth, the official said.

The Cost Of The Oil Price War Is Growing For Russia

Following the oil price crash from earlier this month, Russia's Finance Ministry said Moscow had enough resources to cover budget shortfalls amid oil prices that are between $25 and $30 a barrel for six to ten years. The Russian budget, according to the ministry, was balanced at a price for the Urals blend of $42.40 a barrel. Still, the country's sovereign wealth fund had, as of March 1, assets worth over $100 billion, equal to 7.3 percent of GDP and enough to compensate for lower oil revenues due to the drop in oil prices, the finance ministry said.

The oil glut is filling up the world’s supertankers fast

A combination of surging production from key producers worldwide and capitulating demand in the face of the coronavirus outbreak means that land storage is being overwhelmed, said Robert Hvide Macleod, Chief Executive Officer of Frontline Management AS. The world is likely overproducing by about 20 million barrels a day, or 20% of normal consumption, he said, echoing wider industry views.

“Oil is going on ships at a speed never seen before,” he said, noting that the tanker fleet is filling up at five times the pace of the last oil glut in 2015.

The oil market’s structure has fallen into a so-called super contango, which means it is now profitable for traders to buy oil today, store it, and reap the profits by selling it at a higher price months or even years down the line. International Seaways Inc., another owner, said on Thursday that the total volume of oil in floating storage may top 100 million barrels during this glut.

IHS Markit, an industry consultant, said storage sites could be filled by the end of the second quarter at current rates of supply and demand, implying producers will soon have to scale back. Firms including Vitol Group and Gunvor Group, two of the world’s largest oil traders, say there’s intense demand to keep barrels at sea.

No comprehensive data exists on total storage volumes available in the petroleum supply chain or the amount unfilled at the start of the year, but the International Energy Agency (IEA) has said consumption could have shrunk by 20 million barrels per day because of the pandemic and national lockdowns.

If that is roughly accurate, storage will be filling at the rate of 600 million barrels per month.

And if Saudi Arabia and Russia increase their output as a result of the volume war by an extra 2-3 million bpd between them, the storage would fill even faster, at 650 million to 700 million barrels per month.

The proportion of unused storage available to cope with the drop in consumption and unchanged production is unknown but filling quickly.

Stocks are likely to be growing by 10% per month. On any plausible estimate for global storage, the entire supply chain is likely to be completely full within 2-4 months.

Baker Hughes reported that the number of oil and gas rigs in the US fell again this week by 44, falling to 728, with the total oil and gas rigs clocking in at 278 fewer than this time last year. It is the largest single-week drop since February 2016.

In the runup to the published rig count, analysts were predicting that the results would show a steep drop off in the number of active rigs, and three of the biggest drilling operators in Texas made significant budget cuts, indicating that the industry is bracing for tougher times ahead.

The number of oil rigs decreased for the week, by 40 rigs, according to Baker Hughes data, bringing the total to 624—a 192-rig loss year over year.

The total number of active gas rigs in the United States fell by 4 according to the report, to 102. This compares to 190 a year ago.

Despite the sharp drop off in rigs, the EIA’s estimate is that the United States produced 13 million barrels of oil per day on average this week, just 100,O00 bpd off the all-time high. 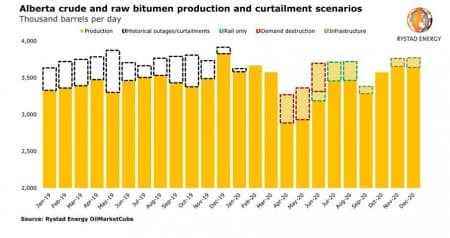 The Covid-19 virus and the ongoing oil price war have created such a large global supply surplus that Western Canada’s oil production will need to be cut from April by some 11%, or 440,000 barrels per day (bpd), Rystad Energy estimates, as the country is days away from running out of available storage capacity.

Western Canada’s storage infrastructure has a generally accepted maximum storage capacity of approximately 40 million barrels. Based on our calculations, more than 30 million barrels of crude oil and diluted bitumen is already held in storage, and the volume is likely to edge towards the high end of capacity by the end of March under current production assumptions.

As a result, Western Canada’s oil production, which Rystad Energy expected to reach some 4 million bpd in its pre-coronavirus estimate, will now probably have to be cut by a total of 440,000 barrels to balance local storage volumes around 35 million barrels. This incorporates at least a 75% reduction in crude-by-rail exports to 100,000 bpd. 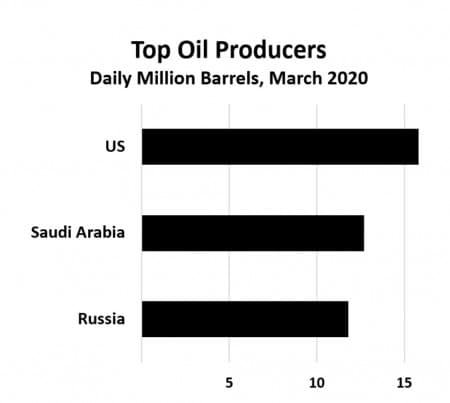 Ted Cruz, other senators, warn Saudis to stop using oil in ‘economic warfare’ against the US

Political posturing to appear to be fighting for big oil from the republicans of big oil states being hurt right now.

And to protect their lobby money.

If all the tankers fill up and the US has difficulty exporting oil, that is another 3+ mbbls a day that isn't leaving and piling up in US storage.