I found a writeup describing Atlanta's experiences Sep. 1918-Feb 1919 during the Spanish Flu epidemic, which included ~2 1/2 weeks of widespread closures as well as social distancing in October. Schools were closed about 3.5 weeks. The city health officer was Dr. J. P. Kennedy:

"Knowing what had occurred in cities such as Boston, he decided not to wait for a more serious outbreak. At a short afternoon meeting on October 7, Kennedy and the city Board of Health voted to close all schools, libraries, theaters, movie houses, dance halls, churches, and other places of public amusement, and ordered street cars to keep their windows wide open except when raining. Just in case there was any question as to the authority of the Board to issue such an order, the city council followed suit with a resolution to the same effect, closing public places for a period of two months or until the epidemic had passed. Violation of the closure order came with a hefty $200 fine. Whether because of the tone set by the Board of Health and the city council or because of a sense of civic duty, Atlanta’s business interests were models of cooperation."

By late October, the pressure to reopen was strong enough to convince leaders to reopen. Schools apparently opened back about a week later (in early November).

The 2nd wave, which started around Thanksgiving, was worse:

"Still, neither Kennedy nor the Public Safety Committee believed the epidemic severe enough to take further action. 'The influenza situation in Atlanta is up to the people themselves,' the Committee declared. In the opinion of Kennedy, closing public places again would be 'useless.'"

"Kennedy maintained this position throughout the rest of the winter, even as the epidemic grew in strength. By the end of January 1919, the situation had grown severe enough that the Fulton County Medical Society invited members of the state, county, and local health boards as well as military medical officers to confer about what could be done to bring epidemic to an end once and for all. A greater proportion of influenza cases were developing pneumonia than had been the case in the last days of 1918, resulting in an increased number of deaths."

"In the end, however, the conferees decided the best course of action was to isolate cases, quarantine households, and to impress upon the public the need to practice proper cough etiquette and to avoid crowds. The committee also suggested that serious cases of influenza and pneumonia not be transferred to hospitals so that they not infect other patients."

"Atlanta’s death rate remained elevated throughout the rest of February. It was not until mid-March that Kennedy could report that the city’s death rate appeared to be returning to normal and that Atlanta’s second wave of influenza had ended."

"According to the figures reported to the Census Bureau, Atlanta lost a total of 829 residents to the epidemic through the end of February 1919."

So, the 2nd wave of 1918 started about a month after business reopenings and 3 weeks after school reopenings. Was the 2nd wave largely tied to and worse due to these reopenings?

It looks like Atlanta is sort of doing a replay of October-Nov of 1918 with the first epidemic wave followed by reopenings. Will Atlanta have a worse 2nd wave later this year? Or will it be much different and be tame? Of course, the 1st wave is not yet done. Also, we're headed into summer vs being late into autumn in 1918.

Ga has been open for about 3 weeks now and new cases continue to drop.  For some odd reason,  that seems to disappoint some people. 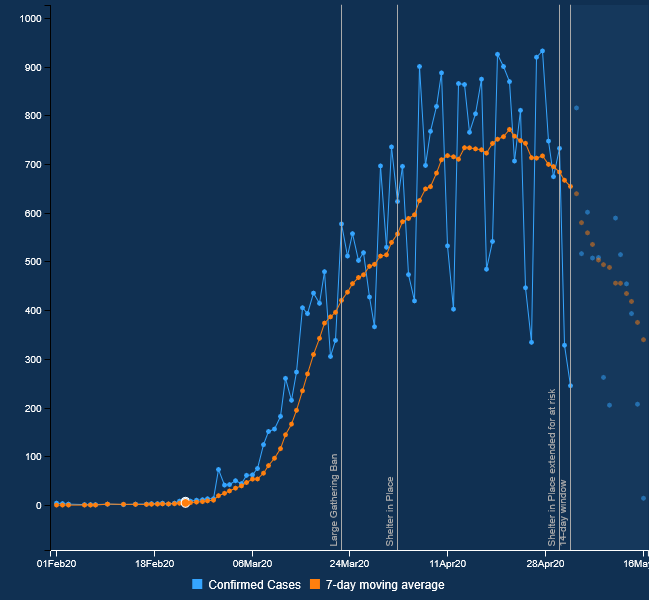 Fortunately, we have more science this time to use.

The incident that you mentioned is pretty profound and if this were October, like it was then, I would be less enthusiastic about reopening slowly.

In 2020, we have enough scientific studies that show conclusively that heat(especially humidity) and stronger US radiation cause survival times of the CV to plunge. This has been witnessed for the last century with the SEASONAL flu virus.

It's Spring, so the seasonal peak of COVID is behind us. In 1918, they opened up just in time for the Spanish Flu season, October, having no idea that it was the worst time to do so.

And there shut down prior to that was just 2.5 weeks.

And one of the recommendations to fight it was having the windows open at all times, except when it was raining(which give you an idea of how primitive their understanding and actions were.

Today, we have massive testing in place. More than double a month ago and more than 10 times what we had 2 months ago. We can identify those infected much quicker and respond quicker.

In 2020, we would never continue re opening if it started getting much worse again. We have the data that shows a definitive peak. We flattened the curve using science. In 1918, they had nothing like this.

In 2020, we also know that 75% of the deaths are from old and especially old/sick people. In 1918, it affected more young people than now. They also didn't have nursing homes or the modern medicine keeping so many old/sick people alive(In 1918, many of the old sick people today would have died already). So in 2020, we can target protective measures for nursing/retirement homes and the old/sick, while allowing the majority of the population to be subjected to a higher risk in order to lessen the depression type damage to everybodys lives.

The graph below is of Georgia, going back to March. Considering the massive increase in testing since then, we know with certainty that the actual rate, if measured with the same amount of testing over the past 2 months would show a much greater plunge in REAL infections.

The blue line and dots are the daily numbers for new infections. The orange line is the cumulative number. 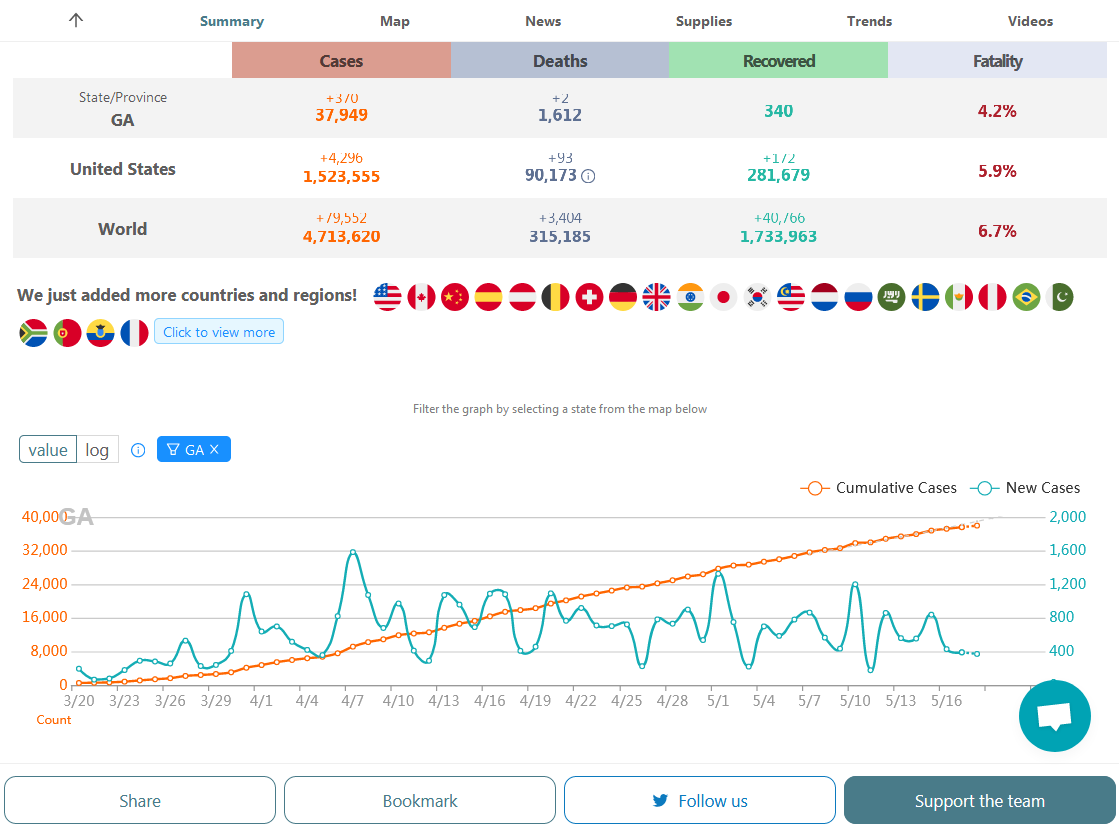 The article is pretty amazing.

One surprising aspect was that they kept theatres open even as the epidemic worsened all Winter. Apparently, after they re opened, theatres were more packed than ever.

Looking back at this environment, the time of year, the lack of science and data and their  actions(lack of actions) it was the recipe for an epidemic of the Spanish Flu in Atlanta that Winter.

Thanks for sharing Larry. There are things to learn from this.