Have you noticed that they are almost flipped from their normal inverse correlation?

When the dollar was faltering from mid/late March, gold struggled (and even declined a bit).  Recently the US$ has a bid and gold is moving higher.

Odd.  Any notion what it means?

Looks to me like they lost there inverse relation about july 2018, The dollar has been getting stronger vs the yuan . (since 2018) At the same time the price of gold in yuan has also gone up.

Maybe...the Chinese are buying us$ and Gold and selling Yuan? This started about the same time as the US placed tariffs on Chinese goods?

Just speculation on my part.

Also gold in Yuan has moved up about 30% since January?  CCP ( Chinese Communist Party) virus lockdown in Wuhan about the same time?

Thanks for all the great links cutworm.

But what does it mean that the correlation broke in early 2018?

Yes, thanks so much for the great charts and discussion joj and cutworm!

Since the reason for market moves in most markets can often be tied to supply/demand considerations(drought in the Cornbelt=much higher price of corn) its easy to assign the reason for why the price goes up and down.

In a few markets its not always crystal clear with solid fundamental reasoning and these 2 markets often move for psychological reasoning. I will take a stab at guessing a potential answer.

2. Gold has fundamentals but psychology drives price moves as much as any market out there. It's considered a safe haven investment and also a hedge against inflation. So even if fundamentals have not changed, people will get scared into buying gold during uncertain times or even if interest rate are rising and the US dollar is getting stronger.

3. cutworm identified 2018 as the point in time when the inverse correlation broke down. What happened in 2018 that could have caused this?

There were 4 interest rate hikes in 2018, so there was a fundamental reason(as well as pschological) for the dollar to go up and all commodities to go down. Certainly it did put bearish pressure on some things, which are lower priced in terms of US dollars, including gold.

4. But gold broke from the inverse correlation then, and did NOT go down. I believe a psychological factor "could be" the tremendous uncertainty in the world and US offset the bearish pressure that in safe times, would have caused more pressure for the price of gold to go down.......and maintained demand/buying in gold as a safe haven. This was also when the tariffs and tension started with China and the battle between President Trump and so many others/the other side continued to escalate,  along with things like the uncertainty of this next election, battle by the extreme left for global socialism rapidly gaining traction and so on.

5. Gold and the Dollar have both gone up before during uncertain times when both are seen as a safe haven.

6. My speculative theory above is independent the fundamentals in the gold market. I am ignorant of what they have been the past 2 years but it appears they could have been bullish enough to inspire enough buying to offset the devaluation from currency appreciation.

Fed raises interest rate for the fourth time in 2018

Interest rates are now at their highest levels since 2008

The relationship between Gold and the US dollar has a long history. Before the current fiat money system, the value of dollar was tied to the specific amount of gold under the Gold standard. The gold standard was used from 1900 to 1971. It ended in 1971 when US President Nixon no longer allowed the Fed to redeem dollars with gold. Eventually, the US government decoupled the value of the dollar from gold altogether in 1976. Consequently, Gold moved to floating exchange and this made its price vulnerable to the dollar’s external value.

The correlation between gold and dollar has been pretty much inverse since then with exceptions during certain periods. In correlation, a direct relationship means that value of two assets moves together while inverse means that they move in opposite direction. To simply explain the correlation, when the value of the dollar increases relative to other currencies around the world, the price of gold tends to fall in dollar terms. It is because gold becomes more expensive in other currencies. As the price of any commodity moves higher, demand recedes. Conversely, as the value of the US dollar moves lower, gold tends to appreciate as it becomes cheaper in other currencies. Demand tends to increase at lower prices. In 2008, the International Monetary Fund (IMF) estimated that nearly half of the moves in the gold prices since 2002 were due to dollar. A 1 % change in the effective external value of the US dollar led to more than a 1 % change in gold prices. 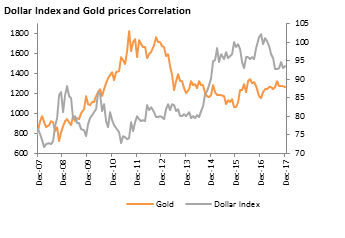 The relationship between the value of the US dollar and gold is also impacted by Interest rates. Since Gold does not yield interest in itself, it must compete with interest bearing assets for demand. When interest rates move higher, the price of gold tends to fall as it costs more to carry the metal. Higher interest rates in the US would help the dollar to appreciate and hence lead to decline in gold prices. Similarly, lower interest rates would lead to a reduced opportunity cost for holding gold and help gold prices move higher.

This was evident after the 2008 crisis when the Fed conducted a series of rate cuts and Fed Fund rates moved towards zero. Gold prices performed exceptionally well during that period and made a lifetime high of around $1900/oz.

Now as Fed is moving towards increasing rates further and unwinding its balance sheet, the pressure on gold prices is evident as the dollar is gaining strength.

There are of course exceptions to this relationship as there are periods when gold and dollar move together as both are considered as safe havens. Therefore during times of global crisis and panic, there may be times when both gold and dollar appreciate. Also, the dollar is not the only driving factor for gold prices. Gold’s fluctuating value will also reflect how strong or weak the economy is as well as global demand for precious metals.

stocks,  gold,  bonds,  and the buck have all been doing better the last 3 to 4 years.

look at a 15 year chart of DB (deutsche bank stock).  this reflects the fact that europe has been stagnating into oblivion.   money has been moving into america,  because people see that they would not do as well keeping their money in places like europe or south america.

look at a 5 yr chart of the buck/yen ... the buck has been trending down against the yen.

so yes, the yen has been going up gradually against the buck.

and the yen and gold often have a strong correlation.

watch the 101 level on the dollar yen chart.  if we go below this, the buck could break down.

Long term china has been buying large amounts of gold

What this means I have no idea

The Yuan is not strong enough to replace the USD

BRICS has been mentioned but has gone no where

China worries their US assets will lose value in a world of falling USD values re: the rising deficit and stimulus spending. Will investors continue to buy US bonds or will the USA buy more and more of it's own bonds???

If the bond market breaks does that mean gold goes up???

Can the Fed continue to buy corp bonds and other assets, even stks to support loser Corp

[Americian Airlines] should be filing for BK soon

Personally I am confused

The War On Gold Has Begun