Officers responded around 2:30 a.m. local time Saturday to a report of shots fired at Cal Anderson Park inside the area referred to as the Capitol Hill Organized Protest (CHOP)or Capitol Hill Autonomous Zone (CHAZ), according to a police statement.

"Officers attempted to locate a shooting victim but were met by a violent crowd that prevented officers safe access to the victims," the statement reads. Police said they were later informed that CHOP medics had taken the two victims to hospital.

Officers went to Harborview Medical Center where they were told a 19-year-old male had died from his injuries. Police said the other shooting victim -- a male -- remains in the hospital with life-threatening injuries.

The suspect or suspects remain at large.

"Homicide detectives responded and are conducting a thorough investigation, despite the challenges presented by the circumstances," the police statement says.

The video shows the initial moments of the shooting, in which the sound of shots was captured on security cameras. Later, body camera video showed protesters confronting police as they arrive at the scene.

That video shows at least eight officers entering the area, some carrying shields, as protesters yell at them. An officer can be heard saying, "Please move out of the way so we can get to the victim. All we are trying to do is get to the victim and provide them aid."

A bystander can be heard yelling: "You don't belong here, they're gone, the victim is gone." Another says, "Put your f***** guns down."

A later clip shows police leaving as members of the public continue to yell at them. Some can be seen holding back other protesters from the officers as they head towards their patrol cars.

As the officer wearing the camera pulls away, he yells "Move, move out of the way" as protesters apparently hit the car.

Police boarded up the East Precinct building in the Capitol Hill neighborhood and left it unoccupied after tensions with demonstrators reached boiling point during protests over the police killing of George Floyd in Minneapolis.

On Monday, Seattle Police Chief Carmen Best denied claims that officers in her department had been instructed not to respond to 911 calls in CHOP.

Best told CNN on Monday, "Seattle is not under siege and we are responding to every call and every area of the city." She acknowledged that barricades in the zone could slow police access.

When CNN visited the zone last Sunday, reporters found a festival-like atmosphere, with meditation and painting. Some people in the zone openly carried firearms, which is allowed in the state of Washington."

metmike: This is  exactly why I have been vehementally opposed to President Trump going in there.

1. It would lead to violent confrontations and any CHAZ residents hurt or even killed because even if they were shooting at law enforcement, they would instantly become martyrs for the movement.........which would be broadcast on tv and just ignite more violence in the mostly peaceful protesting in many places of the country right now and for sure, vent more blame and anger for Trump for causing it.

2. Let these people be. Most of them are harmless and well intended but there are some bad hombre's in there with NO RULES OR LAWS in CHAZ society.  No police, except when they try to force their way in to help somebody. It's a recipe for failure and disaster thats featuring crime and already 2 shootings and 1 death. Let's see how a movement like this can generate enthusiasm from others that see what's going on.

3. They have no strong leadership or message. This has been going on for weeks now. What the heck is their message? What have they accomplished except to prove they can illegally take over an area that does not belong to them, devastate businesses and other peoples legit interests, thumb their noses at authorities and rules that the rest of society cherishes because it protects them............how do we think this will be perceived by most people?

4. The mayor of Seattle who has thrown down the gauntlette to battle Trump over this and referred to it as the Summer of Love has earned a top spot in the "Hall of Shame for mayors"........on a national scale. Before this, she was mainly know in that state and especially that city  but she will always be remembered for that comment "Summer of Love" on live CNN television.I wonder what pj thinks,  who lived in Seattle for decades previous to his move to Nevada.

You know 100 times more than me about liberal Seattle politics and problems.

Previous discussions about the land of CHAZ:

OK, I guess they changed their name to the CHOP zone..............and we had ANOTHER shooting last night. I would say that they have already obliterated any sort of credibility they might have had for people with clear thinking brains.

Let em go at it for awhile longer and the outrage build to a ear piercing roar. Enough so that most people realize that THEY ARE THE BAD GUYS, not the police.

If they have to be forced out, at least people will feel its justified to get rid of these bad guys and restore law and order, which most people will  cherish that much more.

mm: "I wonder what pj thinks,  who lived in Seattle for decades previous to his move to Nevada."

Pretty sad state of affairs, guess the participants hope they can turn it into Copenhagen's Cristiania.  But I doubt that will happen, doubt it will end well. The way the politics had been heading for years was on of the major reasons I wasn't so sad to leave Seattle behind. Though I still miss the scenery at at times even weather.

During the 44 years I lived there Seattle (and the majority of WA state, now with its left wing governor, Senators Representatives) swung from middle of the road to as far left as any place in the country, as the influx from the East and California came in. And it continued on that trajectory, since we left. Where we lived in West Seattle (part of City of Seattle), which used to be a place a lot Boeing workers lived, there were still a number of people that were moderately conservative, but little by little they were completely drowned out by the newcomers, older residents who were persuaded otherwise and the overwhelming majority that lived in the downtown a closely adjacent areas.

I kept hoping there would finally be a "revolt" against the trend, but it clearly never happened. Seems if CHOP doesn't cause it, nothing will.

The Seattle Fire Department said crews were dispatched to a designated area near the perimeter of the CHOP around 4:40 a.m. after receiving reports of a shooting victim requiring emergency medical attention.

The victim, who was shot in the calf, met officers and Seattle fire medics at the designated area outside of the CHOP, according to the SPD. Police said the victim refused to provide any information about the shooting or a suspect description.

Seattle fire transported the victim to Harborview Medical Center for treatment. A hospital spokesperson said a man arrived at the hospital from Capitol Hill around 5 a.m. with a non-life-threatening gunshot wound.

There have been three shootings since Saturday near Seattle's "Capitol Hill Organized Protest" zone, known as CHOP. A 30-year-old man was shot in the calf early Tuesday morning by the northeast corner of Cal Anderson Park.

metmike: So much for the Summer of love (-:

"We were told that there were two men inside the vehicle, and both had been shot."

The man later died, and the 14-year-old boy remains in critical condition, the hospital said.

Monday's attack is the fifth shooting within two weeks in the CHOP area, and the second to turn fatal.

Thousands of protesters have occupied the area, a four- to six-block section of Seattle's Capitol Hill neighborhood, since June 8 in an effort to demand police reform following the death of George Floyd.

But CNN has observed that the number of people within the CHOP area has decreased significantly over the past week.

The police chief said violence in the autonomous zone "is a real problem" and said she questions "why would we continue to allow this to happen."

Seattle Mayor Jenny Durkan's administration has been cautious about moving back into the protest zone. Friday, a spokeswoman for the mayor told CNN it's possible the CHOP area "could last a few more weeks." 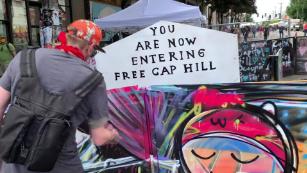 The drawn-out approach has brought criticism from both local and national leaders -- including President Donald Trump, who has repeatedly tweeted about the CHOP area.

The police chief said it's time for people to leave the autonomous protest zone.

"There are multiple people who are being injured and hurt, and we need to do something about it," Best said."

metmike: This is like life in El Salvador  or Pakistan.

Most Dangerous Countries for Travel

Revised top 10 on the next page.

Most Dangerous Countries for Travel

"After the latest violence city officials have said they are considering dismantling Chop, and reopening a police station in the area that was abandoned by officers when the zone was first set up."

metmike: Americans have forgotten what an authentic civil rights message and messenger looks like because its been so long since we've had one.

They accept this and people like race charlatan Al Sharpton(and Nancy Pelosi) as their representation and representatives, causing everything related to race to plunge downwards since 2013.

While MLK was a great, unique man in our history, he actually laid out the blue print to success.

We honor him with a holiday, every city in the country naming a street and other things after him.

That's all wonderful but we continue to completely miss out on his message. We are NOT following his many examples.

Racial healing and positive progress is NOT the objective of many, sadly using sincere folks that are part of the movement who think that way.

Protest and speak out vociferously over injustice. Always do it peacefully.

When you protest for a good cause, earn respect by respecting the rights of others that you claim to be representing and also the people that you want to change!

Photos show how protesters in New York City are occupying City Hall, demanding the police budget be cut before the July 1 deadline